I would like to thank the staff of Advanced Aquarist and Reefs.Org for selecting my reef tank as a Featured Aquarium. 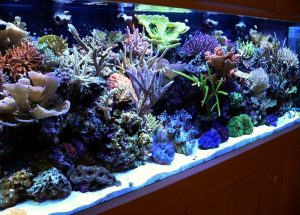 I began in the aquarium hobby around 1991. Actually it was my father who got the ball rolling. I lived at home at the time and we had a 58 gallon Oceanic aquarium. It was basically a salt water fish tank with decorator corals in it. Later, I ended up with that same tank in my apartment along with 4 others, one of them would become my first reef tank. It was an old 55 gallon aquarium on a wrought iron stand, no sump, no top, a cheap strip light, and a protein skimmer siliconed on one end of the tank. This was my first crack at reef keeping. Since then, things improved. I went out and bought a brand new 55 gallon system. I had this tank running for over 5 years. It contained mostly large polyp and soft corals. During those 5 years I bought a house, got married, and had a child (not in that particular order but who’s keeping score). Since I was now settled down I could set up my dream tank. I always wanted to run metal halides because I loved the way they look and I wanted to try other corals that demanded more light. My main concern was heat. I had a friend who was an AC technician. We talked about doing a split chiller system. He assured me that we could do it. In August of 2002 I began setting up this 180 gallon reef tank. The plan was to transfer everything from my 55 gallon to the new tank and add new things over time. I decided I was going to set this tank up right, no cutting corners like I had done so many times previously. I designed and built the stand and canopy to my specifications. I built the stand 3 feet tall so the tank would set at eye level. The canopy would contain 1390 watts of metal halide and fluorescent lighting. I then had a custom 75 gallon acrylic sump with filter bags made. For a skimmer, I chose a Euroreef CS12-2. I run an Ampmaster 3000 as my main pump. This is fed to four 1″ returns, two of which are Sea Swirls. I had a 20 gallon acrylic tank made to fit under my stand for my refugium. I also bought a Mag-Drive 12 to feed my refugium and chiller. For my chiller I used a 6000 BTU window unit air conditioner outside that would feed refrigerant to a 1/2 ton titanium heat exchanger. My heaters and chiller are both controlled by a Ranco ETC. I ran the tank this way for about a year. In about July of 2003 I decided I wanted a bigger refugium. I built a stand behind the adjacent wall to hold the new 40g refugium and the old 20 gallon one. The 20 gallon would now be used as a kalk top-off system. This is connected to a float valve in the sump. 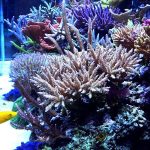 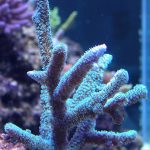 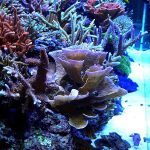 The entire system would now consist of about 250 gallons of water and 200lbs. of live rock with many caves and ledges. Since day one, I had been removing all my soft and large polyp corals and replacing them with SPS corals. Yes, this was the beginning of my REAL addiction. As these corals began growing, it became very hard to keep my calcium levels up. In the later part of 2003 I bought a 6″ X 18″ Geo reactor to hopefully eliminate this problem. It is filled with 90% CaribSea crushed coral and 10% Grotech Magnesium Pro. This reactor is controlled by a Milwaukee pH controller. I run the same model controller on the main tank to monitor my pH there as well. After doing some reading I decided to use xenia in my refugium instead of macros as a nutrient export. I also built egg crate shelves in there to hold frags. It’s more of frag tank now than a refugium. I’ve tried many different things for more water flow like power heads and closed loop systems. In April 2004 I added external powerheads in each front corner of the tank. They sit in acrylic brackets that are screwed inside the canopy. They each produce 1109 GPH and are running on a Natural Wave Timer. 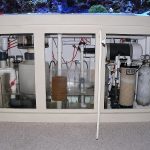 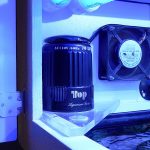 Today, 2 ½ years into it, the tank is doing great. Corals need to be fragged on a regular basis. I change roughly 50 gallons each month using water produced by a 150gpd Spectrapure RO/DI system. I use Peladow calcium chloride (ice melter) for raising my calcium and Epsom Salt to raise the magnesium levels. I also use pickling lime for making kalkwasser and baking soda as buffer. I test calcium, alkalinity, and magnesium religiously (once a week, if not more). I normally feed about 1 teaspoon of PE mysis mixed with Cyclop-Eeze each day. Other foods include frozen brine, zooplankton, Angel & Butterfly cubes, Selco, Golden Pearls, and Garlic Extreme. 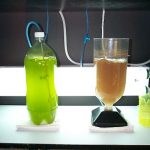 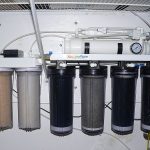 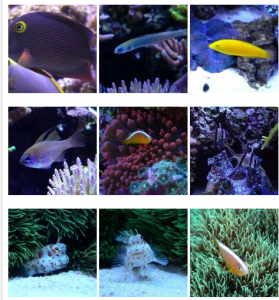 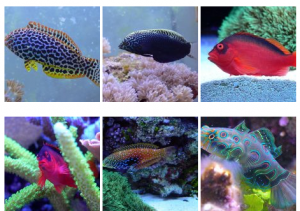 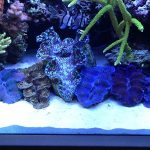 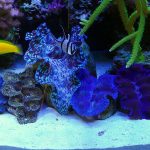 This past year I battled red bugs. I have hopefully rid my tank of them for good thanks to Dustin Dorton at ORA. The latest problem I am having is with Montipora eating nudibranchs. I just found out this month that I have them. Fortunately for me, I have only found a few. I will search all the montis each night and manually remove any nudibranchs until they are gone, I give up, or Dustin finds a cure “hint, hint”. It’s a never ending battle. I think that’s what makes this hobby so interesting and entertaining. For more information about my tank, please visit http://www.ReefRelated.com.