Continuing this month, Advanced Aquarist is hosting a series of unique featured aquariums. These aquariums are nano-reefs, more specifically tanks that contain no more than 20 US gallons in total system volume. Each is one of top five contestants and an independent result of a “Nano Tank Buildoff” hosted by Reefs.Org in a contest that ran for 9 months ending in December 2005.

If you wish to see the rules framework or view any of over 30 entries as they progress from concept and design through to the complete nano reef, please see the following thread on Reefs.Org’s bulletin board: http://reefs.org/phpBB2/viewforum.php?f=80 Our second entry is from Diana, detailing her entry into the contest:

The Nano Reef of Diana 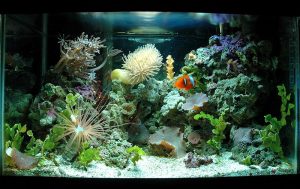 One of the biggest faux-pas when beginning reefkeeping is starting with a small tank. I’ve heard it all: “It’s hard to keep the parameters stable”, or “You’ll just end up upgrading anyways, so don’t waste your money”, and even “You won’t be able to keep anything half decent in a small tank”. But, being the stubborn fish-keeper that I am, I decided when entering into the world of saltwater that I would begin with a 5 gallon tank. Why? I’m not exactly sure. But I figured it would allow me to give saltwater a shot, and to see if it was my thing. Just as it would happen, the beginning of my saltwater tank co-incited with the start date of Reef.org’s ‘Nano Reef Build-off’. And so it began.

Now, being a fresh face to the world of saltwater I didn’t have any unique ideas for the build off. I didn’t really have anything in mind, other than to keep anything I put in there alive. I started with the basics:

Within the first week I added 7 lbs of live rock and some red grape caulerpa (which to my dismay slowly deteriorated over time, and finally disappeared over a year later in one of my newer, and yes larger, reef tanks). And from there the spending began. It started with the “easy” stuff, like some Mushrooms, Zoos and Anthelia. I knew I didn’t have the wattage to attempt keeping everything I saw, nor was the tank old enough. I was cautiously adding little to the tank at a time, making sure to take everything really slowly. The water parameters were stable: salinity 1.022, pH 8.2, Ammonia 0, Nitrite 0, Nitrate <10 (At the time I was not testing any other parameters, such as hardness, calcium, etc etc). As the months went on I added lots of neat things…. some good and some, well, not so good. Like my Electric Flame Scallop (what was I thinking!?). My Feather Duster lasted a little longer, but not by much. I couldn’t for the life of me keep a little Clown goby alive in there. I think I went through 3 of them, as well as some neon gobies, before I gave up. But for every single thing that died I had two things that survived, so I was happy and figuratively fairly successful keeping this tank going.

My maintenance routine was very basic for such a seemingly “unstable” Nano tank.

I ended up having to remove some corals due to lighting requirements exceeding that which the setup could provide, but aside from that the tank did very well up until the end of the Build-off. Now that I know a little more about saltwater I see how incredibly simple my setup actually was, and also how lucky I was to have the successes that I did. If I ever attempt another Build-off in the future, I think I will stay true to one thing: Keeping it simple. 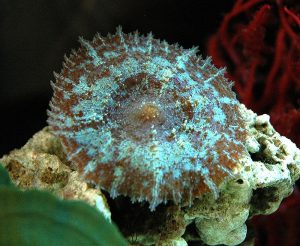 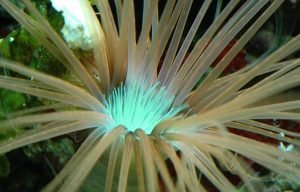