Beginning this month, Advanced Aquarist will be hosting a series of unique featured aquariums. These aquariums are nano-reefs, more specifically tanks that contain no more than 20 US gallons in total system volume. Each is one of top five contestants and an independent result of a “Nano Tank Buildoff” hosted by Reefs.Org in a contest that ran for 9 months ending in December 2005.

If you wish to see the rules framework or view any of over 30 entries as they progress from concept and design through to the complete nano reef, please see the following thread on Reefs.Org’s bulletin board: http://reefs.org/phpBB2/viewforum.php?f=80

Our first entry is from smontanus, detailing his entry into the contest:

The Nano Reef of ‘smontanus’ 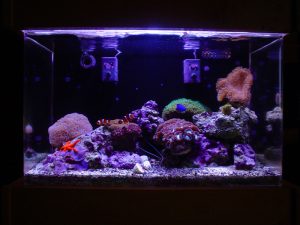 This tank represents my return to marine aquarium keeping from a ten-year hiatus. So much has changed in the last decade that I felt like I was starting from scratch. So as a new reef aquarist I feel a little strange having my tank presented here. Due to space limitations a nano-reef was my only alternative. My intention was to use as many larger tank features as possible to learn skills to apply to a larger tank in the future. I researched extensively for several months, and then modeled the system in the computer prior to building or buying anything. Most of the system is DIY including the stand, canopy, lighting, plumbing and sump. My approach was to have as little equipment in the main display as possible. Due to my lack of experience I also decided early on that I would add inhabitants slowly.

The system has been running almost one year now and I’m extremely pleased so far. Water quality has remained extremely stable and the only losses suffered thus far were a result of shipping stress. I’ve changed a few pieces of equipment out over the past year including the sump and skimmer, but overall the system is as I originally designed it. My maintenance regimen includes nightly dosing of kalk, weekly 10% water changes and glass cleaning, and monthly cleaning of equipment. I test my parameters weekly and when needed using Salifert kits. Feeding is once daily in the morning rotating between Prime Reef flakes, Sweetwater zooplankton, and a homemade recipe soaked in Selcon. I target feed the LPS twice a week and the Orange Linkia every other day. This system has been a very satisfying experience and I look forward to watching it mature in the coming years. 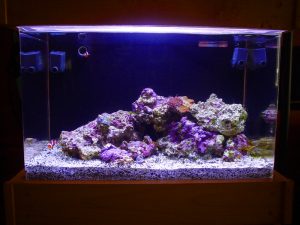 I’d like to thank everyone at Reefs.Org for their assistance, advice, and encouragement. It’s been an awesome experience. I hope I can return the favor in the future. Congratulations to Guy on an incredible system. I think I learned almost as much from watching his progress as my own.