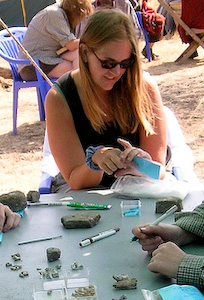 RM: You have an interesting career want to tell us about it?

LM: I am working on my Ph.D. in paleontology and I am also an adjunct at a college. I’ve worked at field sites in China, Kenya and Tanzania. Most of what I do in the field is surface collecting, which basically entails walking around picking up fossils. The fossil deposits in Kenya and Tanzania are so rich that they just erode out every year. I’ve also done more traditional excavations in China. 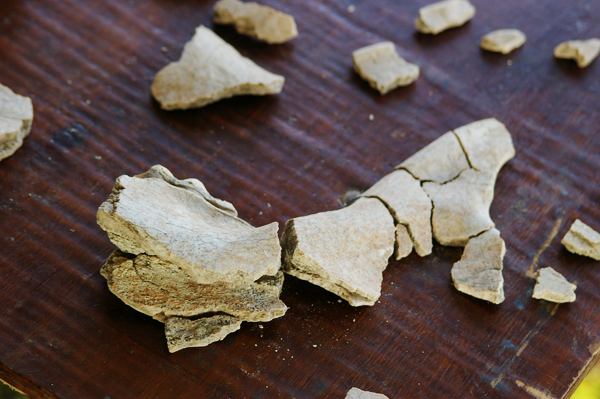 RM: It sounds like you’re the real life female Indiana Jones. What are a few crazy things that have happened to you in the field? I already know you survived malaria once.

LM: Malaria makes you want to die. It was pretty awful because I was in the middle of Ngorongoro National Park far from the comforts of a bed and running water. I kept getting violently ill in the middle of the night and I could see the hyenas prowling around just beyond the range of my flashlight waiting for me to keel over and die.

The last time I was in Kenya, we had a vehicle malfunction on the way back to Nairobi from the site. The suspension fell out of one of the land rovers so we had to wait for people to weld a corrugated metal plate to the bottom of the car to hold the suspension up. While I waited, small children pulled the legs off of large grasshoppers and tried to tickle me with them. Fun times. 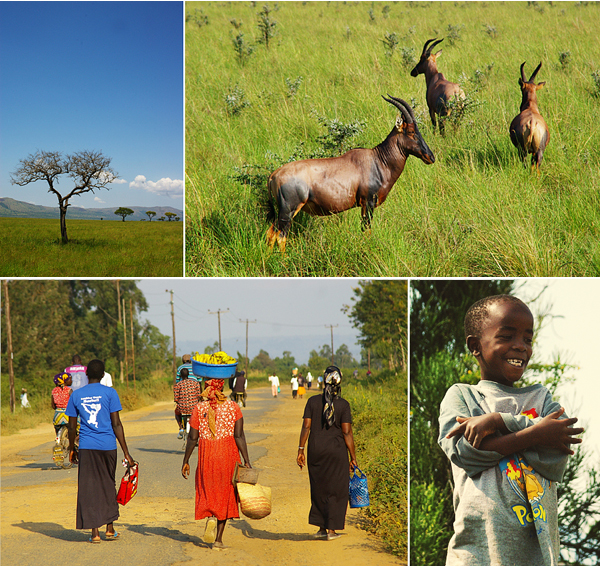 RM: You’re very close to finishing your PhD. How satisfying will that be to attain that goal?

LM: It will be a huge relief to end my 11 years of higher education.

RM: Was this something you wanted to do when you were growing up, where did the interest come from?

LM: No, when I was growing up I wanted to be a writer. Then when I got to college, I decided I wanted to be a biologist. I realized in my introductory biology classes that I was more interested in biology in an evolutionary sense than a molecular sense so I changed my track. I definitely did not dream of growing up to be a paleontologist.

RM: In addition to being academically accomplished you also have a great creative eye. I’m a big fan of your photography, when did you first pick up a camera? 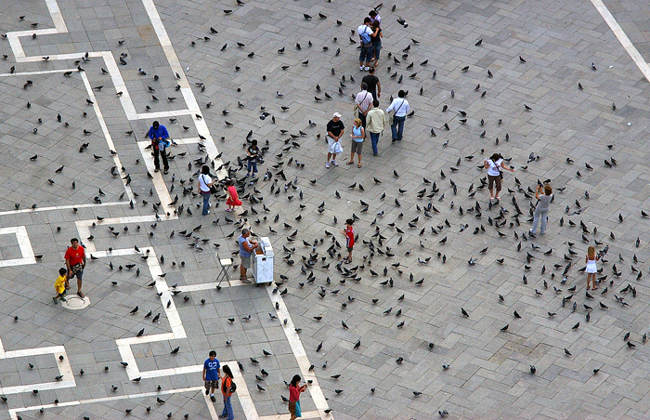 LM: I think my favorite places to photograph have been Venice, Italy and probably Costa Rica. I love all of the architecture and bridges in Venice and the cloud forests in the northwestern part of Costa Rica are picturesque and beautiful. I think my favorite places that I have traveled are Cape Town, Zanzibar and London. I wish I could have gotten more pictures in Zanzibar, but it was hard to photograph the town without drawing undue attention to myself so most of my Zanzibar photos are of the beach near where I was staying. 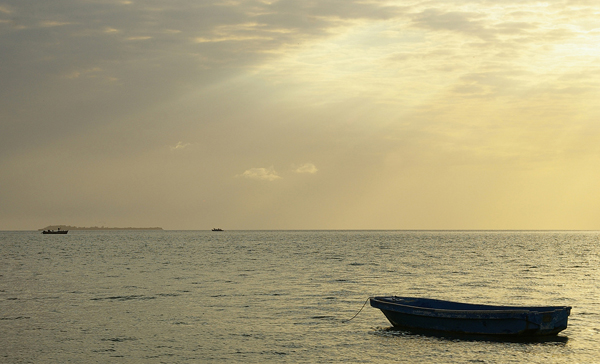 RM: You are also a certified diver, where were some of your favorite dive spots.

LM: I haven’t been diving too many places. I did my open water certification at Dutch Springs Quarry in New York. I did two dives in Zanzibar, two dives off of the north coast of Venezuela and a few dives off the coast of California in Monterey. The diving in Zanzibar was by far my favorite, though one of the dives in Venezuela was a gorgonian forest which was really cool.

RM: Having been to Africa numerous times did you ever try diving with great whites?

LM: Sadly, I was going to go when I was in South Africa but we got blown out. So no Great Whites for me. 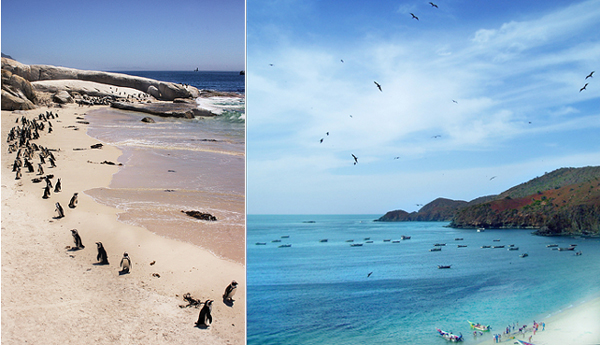 RM: With everything else going on in your life what attracted you to the reef hobby?

LM: My ex-boyfriend was really into diving and reef tanks. I saw him set up his tank and how much he liked it and I figured – I can do that. I wanted to set up a little all in one system, like a JBJ nanocube but with the ex-boyfriend’s help I ended up with a 29g drilled tank and stand and a sump. As it turns out, I quite enjoyed the hobby. Ironically, my ex-boyfriend broke down all of his tanks and has been out of the hobby for almost a year whereas I am working on my second upgrade. I have never kept any aquarium fish prior to this, so I sort of jumped into the deep end.


RM: So you were a fish noob, what other pets did you have prior to the tank, any other pets now?

LM: Growing up, I always had cats and dogs. I actually didn’t have any pets prior to the fish, but I have acquired two cats since starting the saltwater tank – both actually from Manhattan Reefs members. Cleo is what I like to call my “flowerpot stray” – born and bred in KathyC’s flower pot on Long Island. Blue is a blue point Ragdoll that I got from another member. 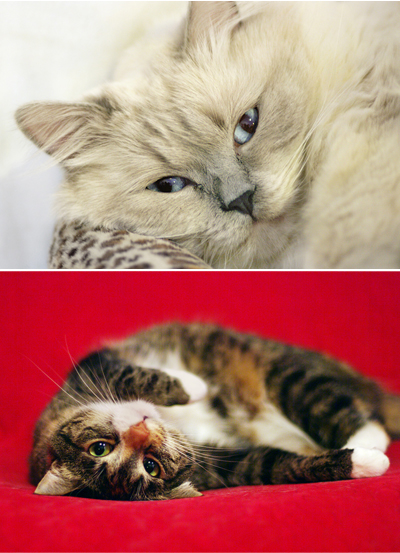 RM: Given your background in science did you already know most of the biology of what’s happening in our reef tanks?

LM: My science background is mostly in paleontology and evolutionary theory, so I didn’t know very much about reef ecosystems when I started it. I have done a lot of reading on this subject in the last two years and have a much better understanding now.

RM: What’s been the most challenging part of the hobby for you so far?

LM: It always bothers me when something goes wrong and I can’t figure out what it is. I like having logical explanations for things so when fish die for no reason or I wake up in the morning and a single acro colony as RTNed, it drives me crazy.

RM: Learning the Latin names of reef creatures must be pretty easy for you.

LM: Yep. Used to drive my ex-boyfriend crazy that I could remember them all after seeing it once.

RM: As an educator how do you see the online forums as a tool for learning about new hobbies such as reef keeping?

LM: I think they can be a valuable tool as a sounding board for problems and pitfalls. The main problem of course is that it’s hard to know whether people actually know what they are talking about or if they are just newbies with an inflated opinion of their own knowledge. Contrary to popular opinion, not everything that is published on the internet is true. 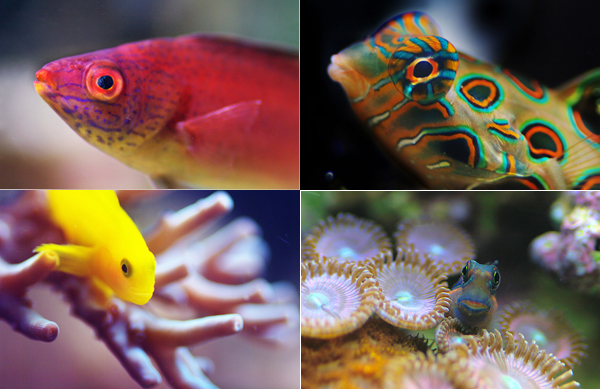 RM: A lot of people seem to depend solely upon the forums for information what would you say to them to get them to pick up some books and use them.

LM: If I knew the answer to that question, I would be rich. It is hard to convince people to pick up a book and read when many people are inherently lazy and would rather have the answers come to them. I thought our book club idea was a good way to get people involved, but it sort of fizzled out.

RM: What would your dream tank be, pretend you won the lottery and were not on a students budget. How large would the tank be and what would you want to keep?

LM: I would want a huge in-wall tank with bookcases on either side, kind of like Jason’s show tank at GA. I like keeping a mixed reef tank, so I would stick with that and I would stock lots of smaller fish so I could watch them school around my enormous tank. Oh, dare to dream.