The Red Sea stretches from the gulfs of Aqaba and Suez in the North, past the Sinai and down to its link with the Indian Ocean at Bab-al-Mandab a narrow – and shallow ‘neck’ between the coasts of Aden and Djibouti. Along its 1,900km length the sea is surrounded by the deserts of Egypt, Sudan and Eritrea to the west and Saudi Arabia and Yemen to the east. Jordan and Israel have a relatively small Red Sea coast at the head of the Gulf of Aqaba. 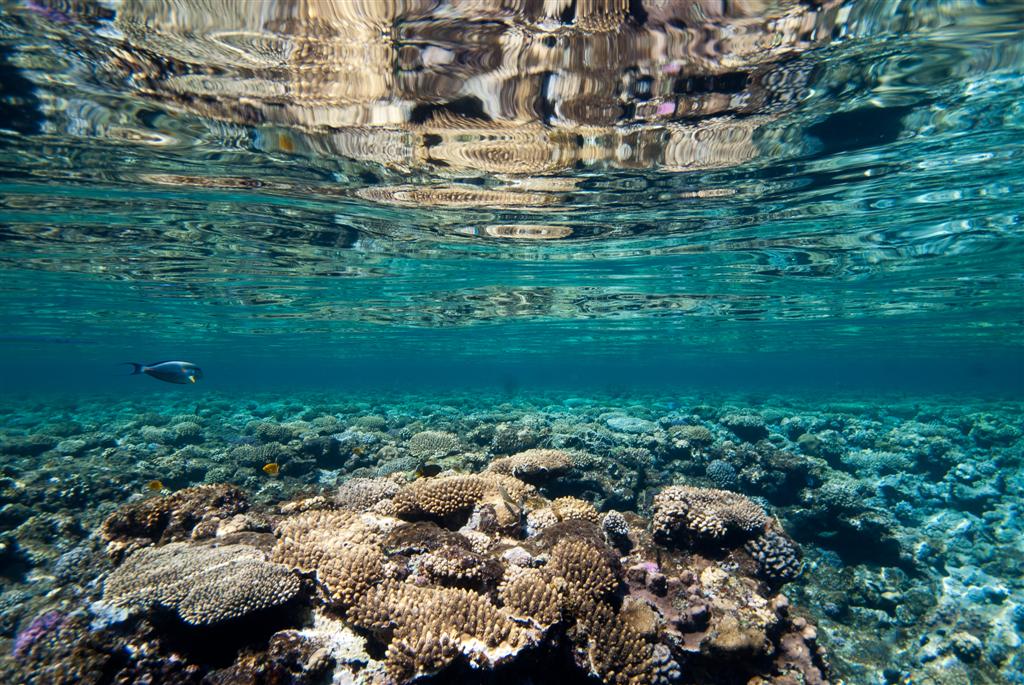 The sea’s origin dates back to either the slow continuation of the great split in the Earth’s crust that forms the Rift Valley or to a more rapid and dramatic event 34 million years ago – depending on the theory you subscribe to. Either way, the sea is formed between two continental plates so is in fact a juvenile ocean.

It’s very narrow link to the Indian Ocean has meant that over the millennia, as sea levels have fluctuated, the sea has alternately dried and flooded. Since the most recent inundation (after the last ice age 15,000 ya) the sea’s relative isolation has allowed a distinct divergence amongst some species from their Indo-Pacific counterparts. Roughly 150 fishes are considered red sea endemics, the Orchid Dottyback (Pseudochromis fridmani) and the Eight line Flasher Wrasse (Paracheilinus octotaenia) for example. A complete account of the endemic invertebrate fauna is still awaiting completion, but it is reasonable to assume a large number of coral species are also endemic – there is still much to learn. 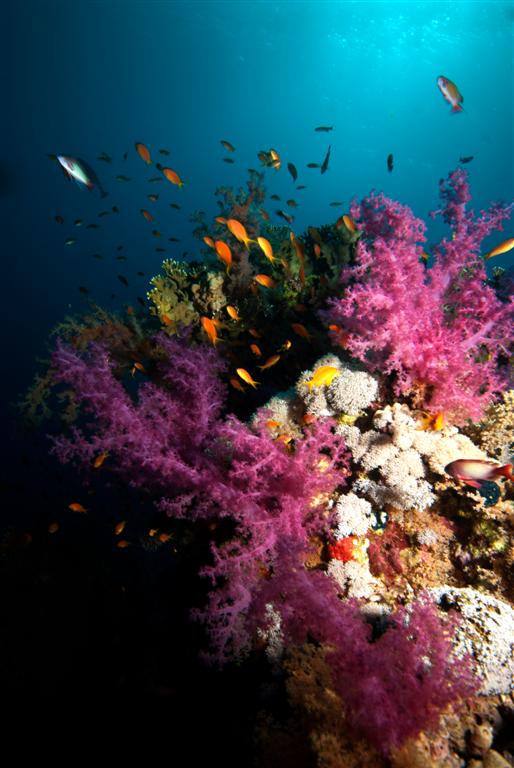 The exceptional water quality found in the Red Sea is largely due to the area’s lack of input from rivers and precipitation, the only water input is from the Indo-Pacific region. This results in usually gin-clear water, and higher salinities than experienced in other coral-rich areas (up to 42ppt in the North). Currents are often seasonal and in locations where currents can be relied upon, significant and astoundingly beautiful growths of Dendronepthya and Scleronepthya can be found, feeding heavily on plankton.

The countries around the Red Sea have had long histories and in recent years have seen difficult times. Political and economic instability has limited the amount of tourism to the reefs, though the Egyptian coastline, around the towns of Hurghada and Sharm-el-Sheikh now cater for tens of thousands of tourists a year, many of whom are divers and underwater photographers like me. Given the region’s proximity to Europe, the majority of visitors are from the countries of the EU. Only rarely do you hear a voice from North America.

The reefs of the Red Sea are truly astounding; fringing reefs are found along most of the coastline and are associated with productive sea grass beds which support a very limited number of dugong. There is only one true atoll in the sea at Sanganeb (Sudan’s only marine protected area). 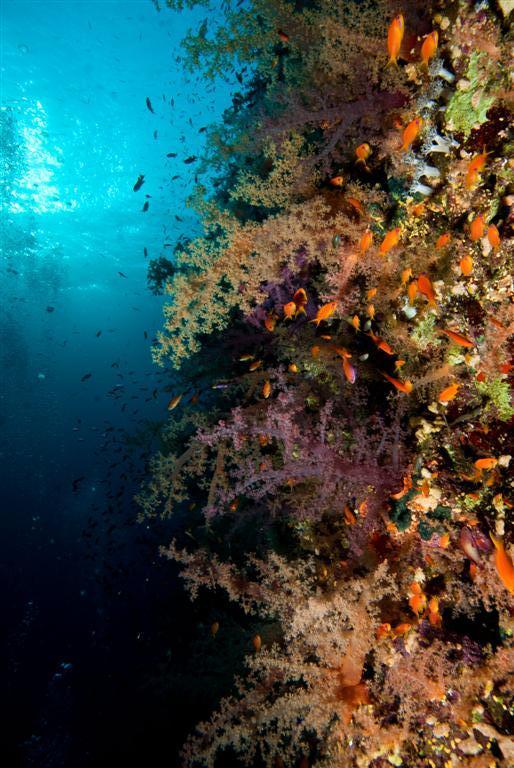 Ras Mohammed is a truly astounding site. As a national park it receives some protection against fishing and in the summer months attracts several shark species, turtles and large pelagics. Throughout the year the deep drop-off, at around 800m is a coral-clad wall to make grown men weep. Scores of thousands of Anthias swarm amidst the neptheids. Closer to the surface, bommies attract a multitude of fish which shelter amidst the acroporids and ubiquitous Seriatopora hystrix, fire coral (Millepora dichotoma) and Pocillipora verrucosa

On closer inspection a bommie can be very absorbing as you spot nudibranchs, small hydroids sheltering in shadowed cracks and crannies and other soft corals such as Anthelia, Xenia, Litophytons and Sarcophytons. On even closer inspection, just about all of the Pocillopora colonies host small gall crabs – the diversity is almost fractal.

Some of the Red Sea’s most attractive and diverse reefs are found in the narrow channel known as the Straits of Tiran. Here, four small reefs offer some of the best sites the region has to offer. The Tiran reefs of Gordon, Jackson, Thomas and Woodhouse are somewhat oddly named after British cartographers. 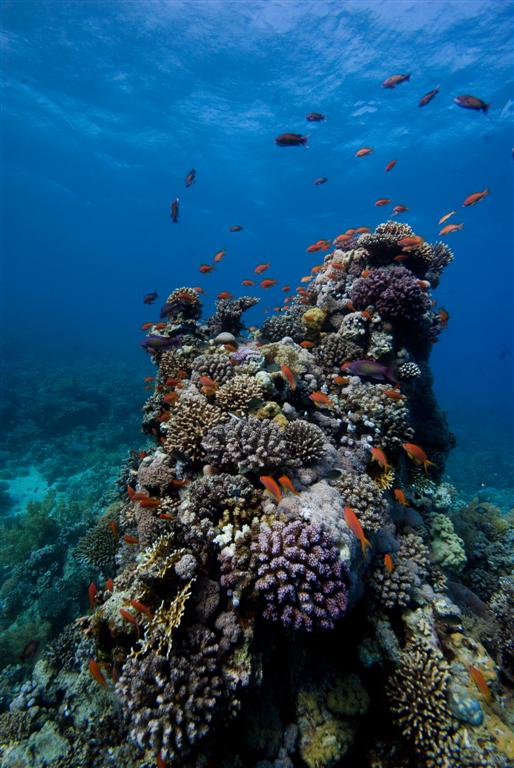 The Tiran reefs are truly spectacular and offer some astounding coral growths, tabulate acroporids are particularly astounding with large clonal colonies covering many square metres that border against large domes of Porites species, Platyygyra and Favia. You also seem a greater diversity of fish species, with Arabian Anthias (Pseudanthias taeniatus), Zebra Angels (Genicanthus caudovittatus), various Chaetodon species, Pomacanthus and Holacanthus species and the ever present wrasses from the huge Napoleon (Cheilinus undulatus) to small family groups of Twist’s Wrasse (Anampses twistii) all competing for your attention.

Again, when you look more closely you see more, countless fungia are seen in the rubble at the bottom of the reef slope and the occasional orange of a clown fish alerts you to the presence of a Heteractis crispa or magnifica or a bubble tip (Entacmea quadricolor). The anemones are mainly dull browns, but on occasion are red, sky blue or lime green. Just about all host Clowns (Amphiprion bicinctus), small commensal shrimps and on occasion Three Spot Damsels (Dascyllus trimaculatus). It’s nice to see a fish rarely kept in captivity due to its belligerent nature

The tropical sun also supports tridacnids (T. maxima and T. squamosa), it is remarkable to note just how far most of the clams are embedded into the reef itself as their mantles dissolves the substrate around them. I always try to photograph them fully extended but never seem to be able to approach without triggering their shell-shutting response. 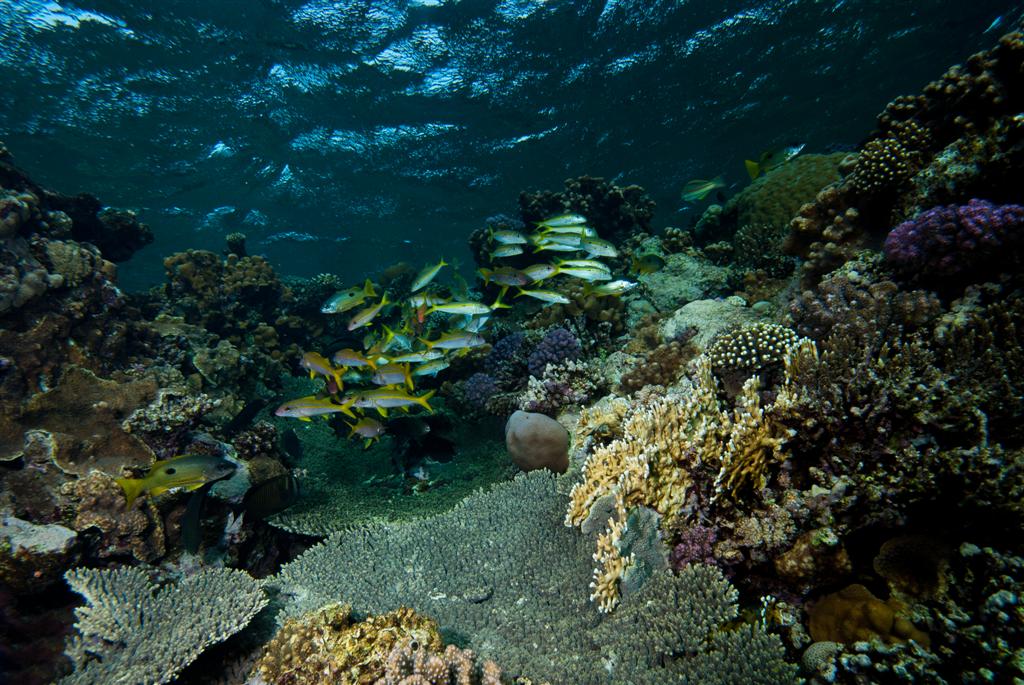 Divers tend to seek depth, and in Tiran, away from the sunlit shallows, species that rely more heavily on planktonic food can be found in darker waters. Venturing deeper often reveals large fan corals; over a metre across that shelter Long Nose Hawkfish (their patterning makes sense in their natural habitat). Feather stars often take advantage of these gorgonians to reach into stronger currents. On a night basket stars, those filigree echinoderms emerge from the reef to do likewise. Describing the species seen on a night dive is another article in its own right. 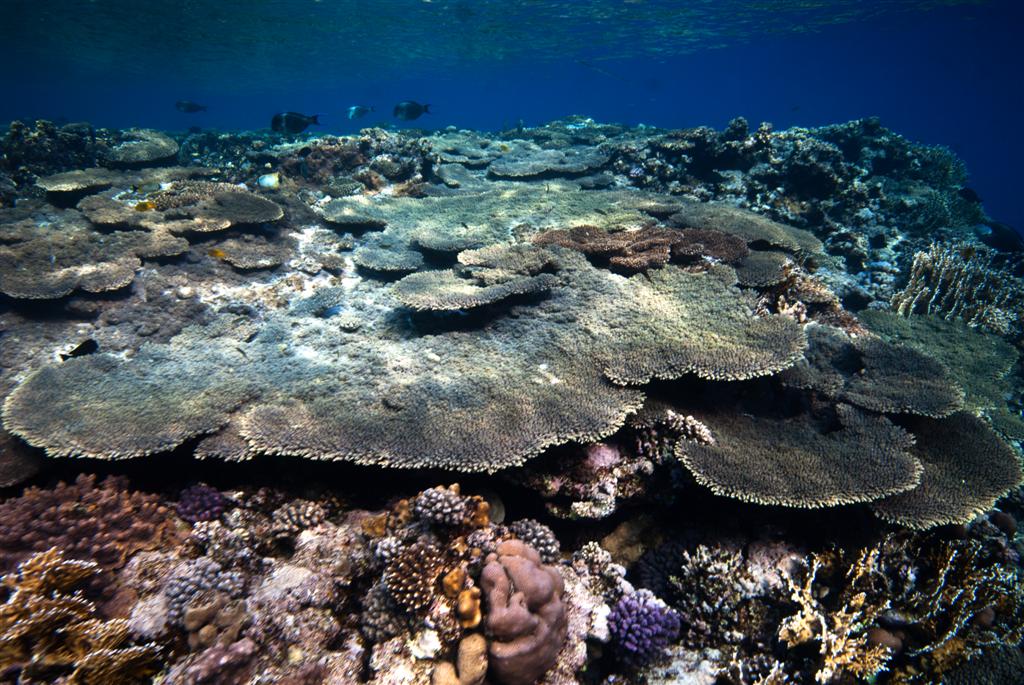 There’s so much to say on the subject of this astounding future ocean, only by visiting this region and discovering its unique reefs will anyone truly appreciate it. At present visitors might not feel encouraged to travel here, with the political situation the way it is. This may have benefits for some of the dive sites and shipwrecks that receive hundreds of underwater visitors a day, yet as ever, tourist dollars and euros can help protect natural habitats by giving them an economic value.

For me the Red Sea offers an escape from the workaday world, but also a source of inspiration. Indeed my current tank was partly inspired by a small bommie I came across. Above all though, I see diving and reef keeping as sympathetic towards each other, one informs and reinforces the passion for another. 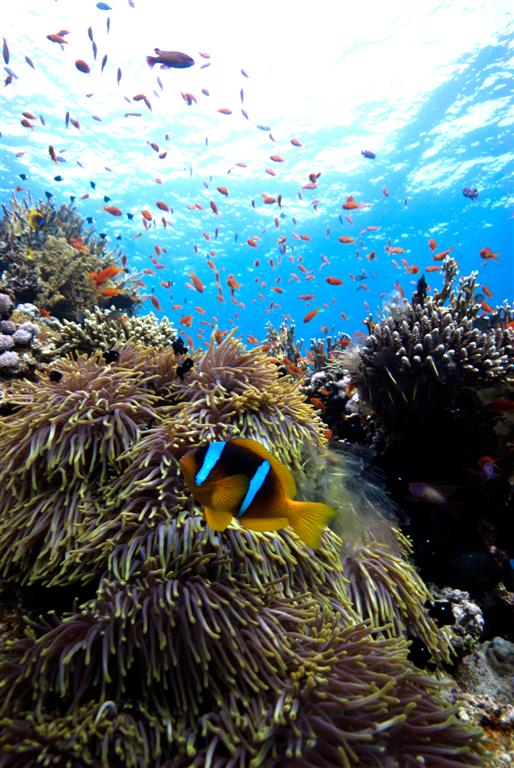 Several species host amidst this anemone. 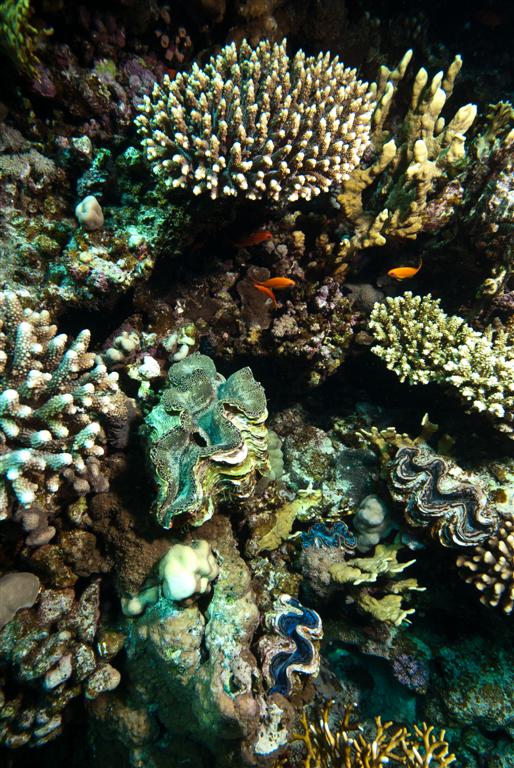 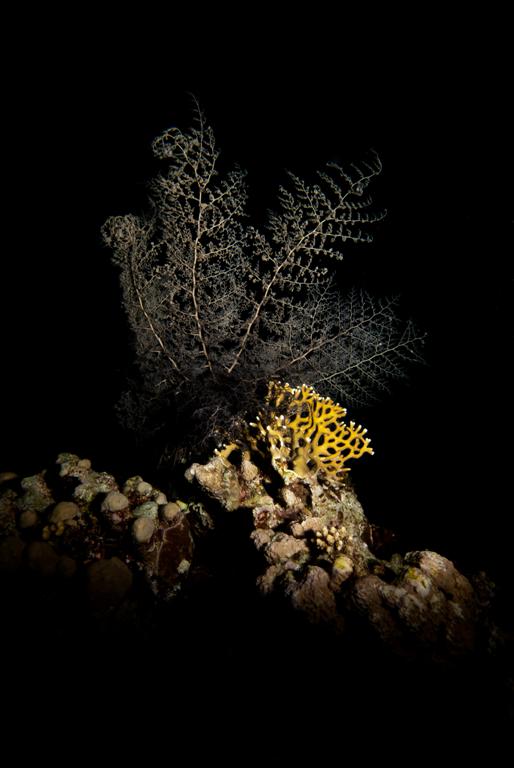 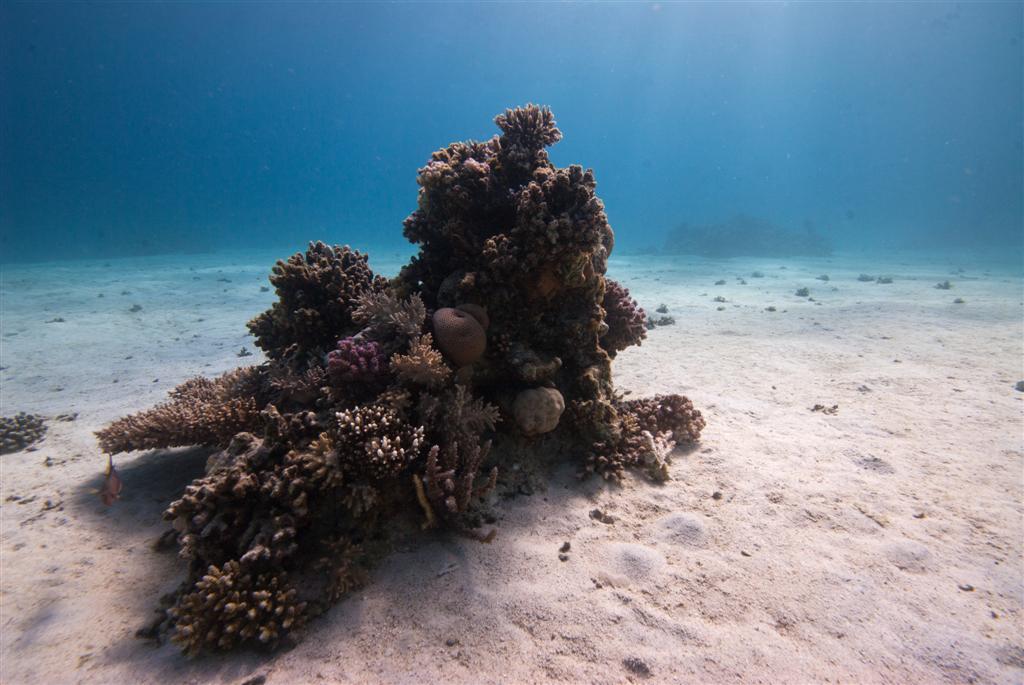 Equipment Review: Getting the Most from Your T-5 Lights: A Look at Reflectors and More