By Dana Riddle and Sara Peck 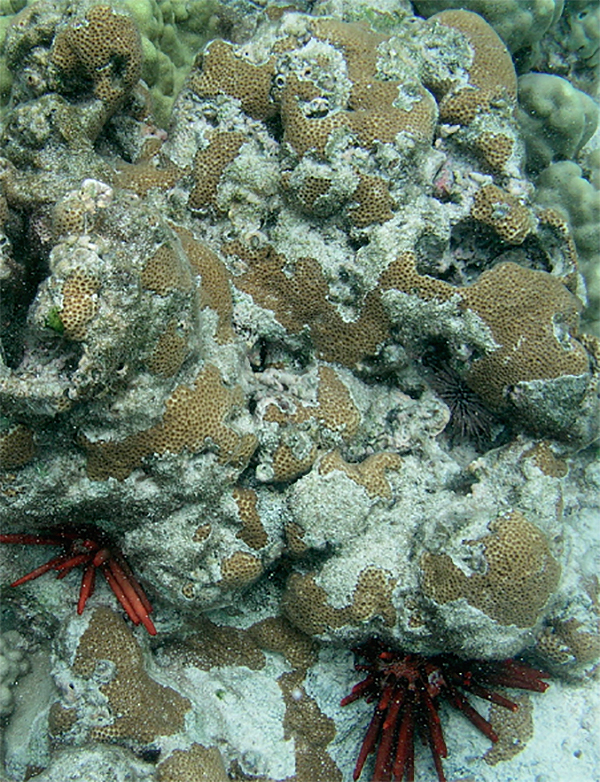 Corals are of the Family Faviidae are very common in the world’s shallow tropical and semi-tropical oceans. However, in Hawaii only six species in two genera have been reported (Leptastrea bewickensis, L. inaequalis, L. purpurea, L. transversa, Cyphastrea ocellina, and C. agassizi.) We will report for the first time the spawning behavior of Bewick’s Coral (Leptastrea bewickensis) in Hawai’i. This species is named for Bewick Island of the Great Barrier Reef, Australia.

As corals go, L. bewickensis is not particularly attractive or conspicuous, and will probably never receive the attention that other corals have (such as Acropora millepora and Pocillopora damicornis.) However, its significance as a member of Hawaiian reef ecosystems should not be diminished. Long considered a variant of Leptastrea purpurea, it has only recently been described as a different species.

Often mottled in color (brown and tan), it grows on hard substrate surfaces and beneath overhangs where much of the colony is hidden. Exposed portions of this encrusting coral are often patchy with more complete growths in shaded portions.

Colonies are usually fairly small (30 cm, or 1 foot across) but can be larger. At Kahalu’u Bay, these animals are often seen as remnants of larger colonies, where only spotty patches of growths remain on the original skeleton. These corals prefer shallow waters with surge and the Kahalu’u specimens are no exception – they are concentrated around a rocky, wave-washed reef crest.

Our initial observations, like many discoveries, were made entirely by chance. The West Hawai’i Sea Grant agent (Sara Peck) was snorkeling in Kahalu’u Bay early one July morning in an attempt to document late seasonal spawnings of the Antler Coral (Pocillopora eydouxi.) She did not see P. eydouxi spawn, but did observe Bewick’s corals expelling eggs in a forceful manner (described as ‘puffs’.) Colonies spurted perhaps only one hundred eggs per contraction and these were visible only for a second or two. Observations were made when the ocean was unusually calm and even then the visible gametes were dispersed very rapidly. Had wave action been stronger, the spawning would have been very difficult, if not impossible, to observe. Spawning lasted about 15 minutes.

The next morning, four observers (Monell, Pardau, Peck, Riddle) were at Kahalu’u to observe another spawning event. Again, release of eggs was observed and samples were collected using a kitchen baster, and transferred to 250 milliliter bottles.

An attempt to video the spawning event was not successful.

Our observations are as follows:

– Colonies are apparently gonochoric (separate sexes) based on fertilization rates observed in the laboratory. No histological surveys were conducted.

Figure 2. Initial report (from limited observations) of the spawning behavior of L. bewickensis.

Samples were carried to the laboratory (about 1 mile away) where further examinations and an attempt to culture the eggs were made. Photomicrographs were made using a Meiji microscope and an Olympus digital camera (C-5050) with Spectronix microscope adapter. A reticle allowed us to estimate the size of observed objects. 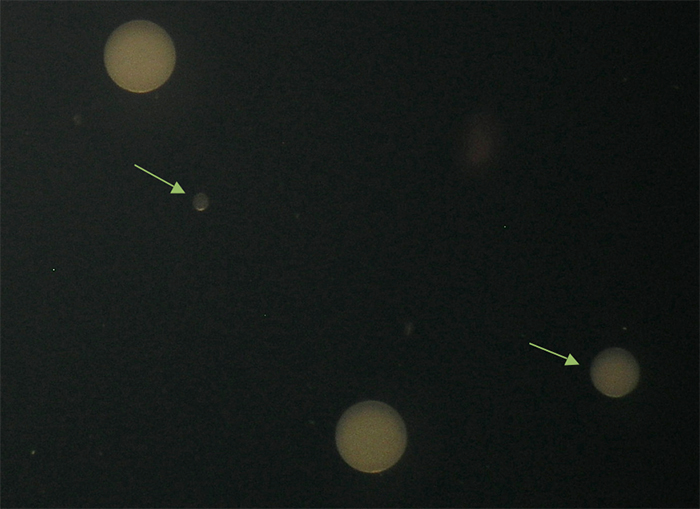 Figure 3. The larger eggs are ~120 microns in diameter. Note that 2 eggs are much smaller. Is this a case of premature egg release? Eggs are reflecting light in this photo, giving them a whitish appearance. 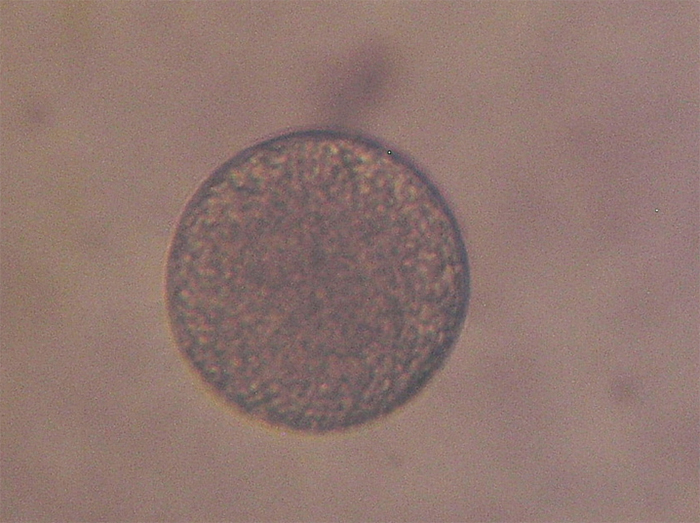 These were our findings:

– Eggs are up to 125 microns in diameter (although much smaller eggs were observed, indicating premature release of oocytes. See Figure 3) They are released as discrete units, not in egg or sperm bundles

– Eggs are azooxanthellate (no zooxanthellae, these symbiotic dinoflagellates must be obtained horizontally, that is, from the water column)

– They appear opaque white in color when reflecting light, and granular in transmitted light

– Eggs are negatively buoyant in lab under conditions of no water motion. Oocytes will sink to the bottom even in an aerated bowl where water velocity is low

On July 9, the gamete samples were mixed together in a 2 liter glass container and aerated with coarse bubbles. About four hours after the spawning event, division of a few of the eggs was documented (see Figure 5). 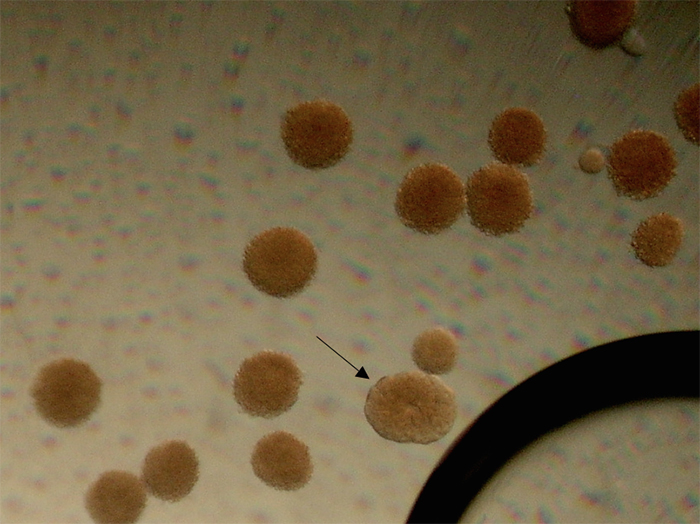 Figure 5. One fertilized egg is undergoing division, while the others (save the tiny egg toward the right corner) were not fertilized and are starting to disintegrate. Photomicrograph by Dana Riddle.

All were lost 10 hours after the spawning event. We believe this was due to disintegration of unfertilized eggs resulting in a bacterial bloom (the water appeared slightly cloudy.)

Success with captive coral breeding has been limited to mostly brooders, where colonies are hermaphroditic and self-fertilization (referred to as ‘selfing’) results in fairly large planula larvae being released. Reports of the ‘weedy’ stony coral Pocillopora damicornis, Favia fragum and Tubastraea species producing offspring in captivity are routinely reported. Captive corals releasing eggs/egg bundles, where fertilization takes place in the water column, are not uncommon. The limited comments offered here may be of some use to advanced hobbyists dealing with coral spawnings. It is only a matter of time before we crack the code for successful coral rearing.

Although our attempts to proceed past the first step of coral farming from scratch (egg fertilization) met with very limited success, there is some important information to share.

Spawning in many corals is triggered by their biological clocks using hours of daylight as the stopwatch, while some (probably few) species use moonlight as the countdown timer. Temperature, if less than about 75°F, can trump daylight/moonlight if it is too low – personal conversation with Paul Jokiel.) If conditions within an aquarium are correct for one sex coral, they are likely good for the other sex. One sex will release hormones into the water to signal the beginning of the spawning event and in this manner spawning is synchronized.

If the hobbyist is fortunate enough to observe the spawning event, gametes can be collected with a dip tube or turkey baster. Eggs and sperm should be mixed in a clean plastic container, but only for perhaps ½ hour to prevent polyspermy (fertilization of an egg by more than one sperm.) Dilute the water containing the fertilized eggs and aerate the container to create a gentle rolling action. Eggs are small (they can be removed by filtration through fine nylon mesh used in silkscreen printing. Small amounts are available at reasonable prices on the internet. A mesh with openings of about 80 microns should do it.

With luck, swimming planula larvae will be observed after 4 hours or so. These will search for a proper spot to settle. It is unknown what will induce settlement, but research documents report bio-films (slime) and calcareous algae as potential candidates. It is also unknown at what point the planula larvae will become infected with the proper zooxanthellae clade/species.

Leptastrea bewickensis offers the most challenging demands for captive coral spawning. At least one mature colony of each sex must be present and in conditions favorable to gamete development. The small eggs will sink to the bottom in conditions of poor mixing. The likely reason for eggs’ negative buoyance is the lack of a lipid yolk. If this is indeed the case, the competency time of the larvae will be much lower than those with positive buoyancy/large yolks. In other words, the planula larvae will have to quickly find a proper place to settle, or perish.

Hobbyists are encouraged to publish observations, developed techniques, etc. concerning coral spawnings in captivity. Who knows, your observations might be key to solving mysteries of captive coral breeding and create an ark for threatened species. 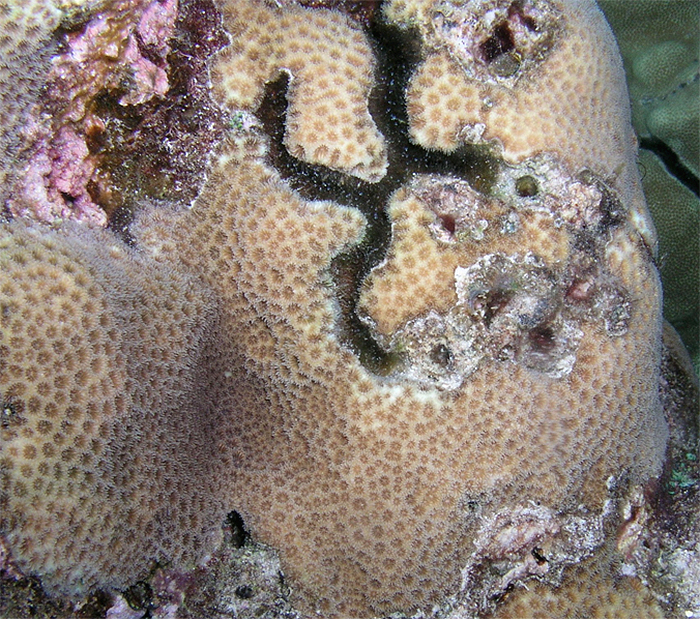 Figure 7. An alpheid shrimp has created an H-shaped burrow in this Leptastrea specimen. The shrimp farms algae within the depression. Photo by Dana Riddle.