Fish Tales: Confessions of a Wrasse-aholic

I’m a Wrasse-aholic… I know this, and maybe I need help? My friends have tried to tell me and have held interventions – I even tried rehab, but at the end of the day, I am always drawn back to those pencil shaped bodies that zip through the reef. 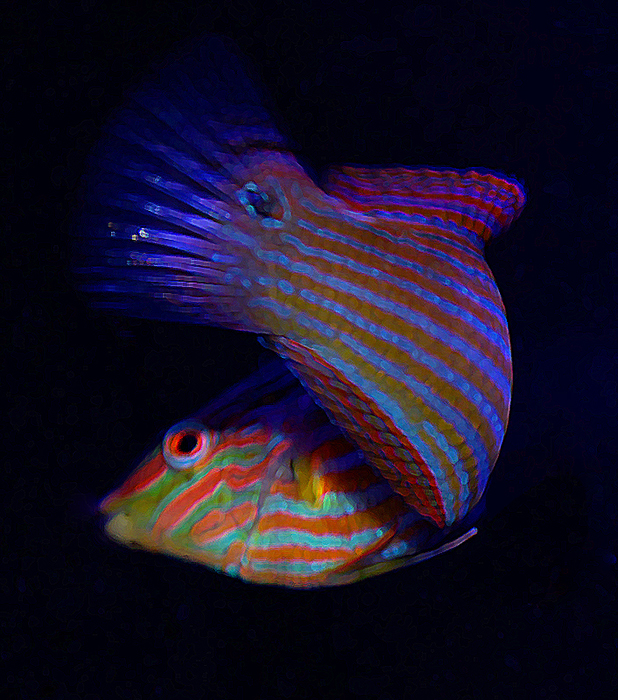 It all started long ago and far away, when I lived in England. I was fifteen and like most disillusioned kids, I was looking for a habit. I distinctly remember walking into a local pet shop and considering a cat, maybe a ferret, possibly a bird, and then I saw that fish. It was an instantaneous addiction. Not like a gold fish… You can have a few of those and never want another. No, this was a serious fish. A single yellow wrasse in a marine tank – the first I had ever seen and I had to have it.

Habits are often expensive, and this one promised to be. After raiding my piggybank and bank account, the wrasse was acquired – together with a 30 gallon tank and some live rock, and for the longest time I was happy. But habits are habits, and once formed, the craving kicks in. After a while, a single yellow would no longer do, I needed more. So I acquired another and somewhere along the way a larger tank. Now yellows are an easy fish, the pleasure derived from them is good, but I knew there were other more hard-core wrasses out there that I had to try. I wandered the streets of my hometown looking for such, until I came across a guy who had a fish store and a six line. It was a shady cash deal, but I was soon rushing home to try this new wrasse. Such a contrast to the yellows, this guy had alternating bands of color!! Stunning, vivid red and green stripes. I didn’t realize it then, but that six line was the gateway fish to a long spiraling decline of more and more wrasses. 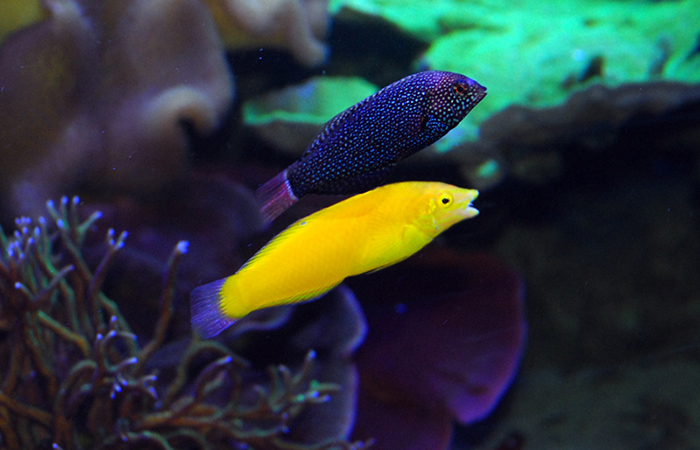 After the six line, I tried a melanurus… I wasn’t sure I was ready for that fish, but like all addicts, desire overruled common sense and soon a bag was acclimating in my tank with that blue green denizen inside. I kind of figured, “if you can do a six line then what’s a melanurus?” …Other than a bigger shot of wrasse-iness. The melanurus satisfied me for a month or two until the craving set in again, and before I knew it, I had a marble wrasse (the snowy white checkerboard sides are amazing, and that head stripe!!). After that it was onto the leopards – a jeweled and a black in rapid succession, followed by McCoskers and a mystery wrasse. Then, before I could control myself, a pair of potters wrasses and a pink margin graced my tank. Within a few months, I was back prowling the stores looking for another fix, this time in the shape of a rhomboid pair, and the world was a beautiful place. Then came my downfall. 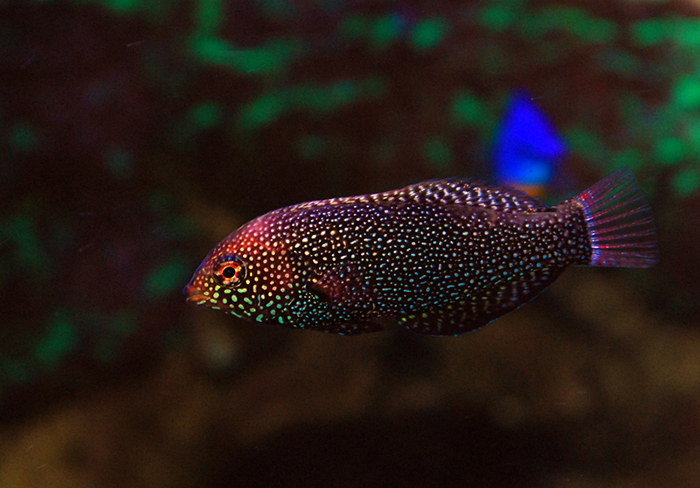 After all those better and better wrasses, I needed something really special, something different, and then it hit me – a trio of red coris. It was then that my friends intervened and tried to prevent the addition of the trio to my tank (which was by now a 600 gallon). They flat refused to help me get them – so one night, while everyone slept, I snuck onto the internet in the wee hours before dawn, and stealthily perused the photos you can find after a quick search. By dawn, the trio was ordered and I slept happily awaiting them. In hindsight, my friends were right – I should have listened – but I had a problem and thought I knew better. Addiction makes you irrational… Surely they wouldn’t be as hellacious as my friends said. They told me and warned me, but I did it anyways. For a while, the after-effects were good, I felt happy and thought I was in control – but then the nightmares began. Each day I would wake to a new tank. All my frags would be randomly distributed across the sand bed. Crabs would be indiscriminately murdered, rocks turned over… It was horrific. This was my wake up call. I needed to throttle back the wrasse abuse and seek help. My friends supported me in this. One took the red coris away to a fish only and I had to make do with the remaining plethora of fishy friends. It has been a while since my last wrasse, but the craving remains. I may be better but I’m not cured. I wonder if they will notice the Hawaiian Flame pair I currently have my eye on. 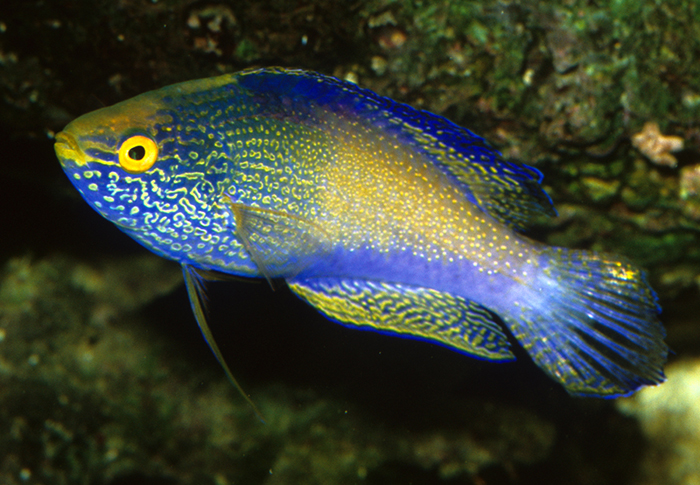 From the outside, I guess it would appear that I really do have a passion for wrasses. The yellow wrasse I described above really was the first marine fish that I purchased, and I guess it was also the reason why I now have over 2000 gallons of saltwater at my home. That first yellow wrasse was purchased over 30 years ago, and has long since died, but every tank I have ever owned has had at least one yellow wrasse swimming in it. The rationale for the purchase of the first yellow was purely desire, however the rationale for the purchase of all the subsequent yellows, and the majority of the other wrasses I have owned, was more from functionality in a running reef than from a misguided addiction – although I really do regret the addition of the three red coris. My personal feelings on the wrasses are that, for the most part, they are a highly functional, and desirable, component of a captive reef. In particular the Halichoeres species, which include the yellows (H. chrysus), themelanurus (H. melanurus), marbles (H. hortul****), greens (H. chloropterus), dusky (H. annularis), and many other beauties, are particularly desirable as guards against pests. For the most part, the Halichoeres are compatible with the other fish in a system and are not overly territorial. They are however, excellent predators of flatworms and other nasties such as coral eating nudibranchs and sea spiders. 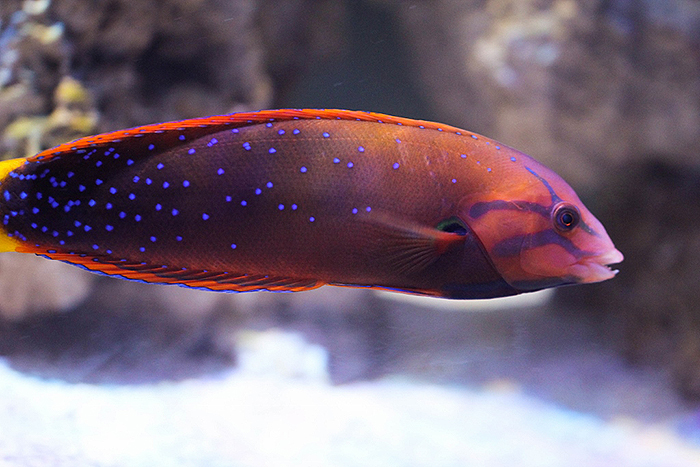 Over the years, I have owned all of the fish that I just listed above. My experience with them are that the marbles are excellent for ridding a tank of red flatworms but have the tendency to get quite large. Once they hit the adult size of 6 inch plus they can become a nuisance and develop the habit of turning clams over and eating the foot, which effectively kills the clam. As adults, they are also strong enough to flip over rather large rocks in their incessant hunt for food. This results in a constant rearranging of the tank. The marbles are also voracious eaters and will consume most of any added food before the other fish get to take more than a few particles. The melanurus and christmas wrasses (H. claudia) will also eat flatworms but not as voraciously. The downside of these two wrasses is their ability to shuck hermits from the shell. They will literally decimate a tank of hermits in a few days. I know this to be true as I watched a pair of melanurus harvest 100 scarlet hermits I added to my tank. It took two days for them to decimate the entire lot. These two species do get large, but to date I haven’t seen them attacking clams. The Green coris is a great fish as a juvenile and a holy terror as a six-inch adult. Again, tank rearrangement is the biggest downfall of these guys. 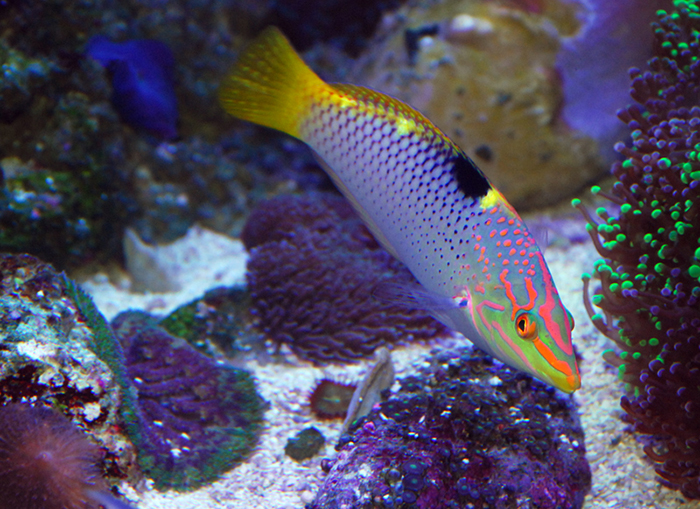 This brings us back full circle to the yellow coris. To my mind, every tank should have at least one yellow wrasse – and if space permits, a pair. They are model citizens in almost every way. Aside from the vivid yellow, they are very peaceable fish with a large appetite. They are known predators of flatworms and nudibranchs. They stay relatively small which allows them to penetrate scrolling corals and other tight spaces in the hunt for food. This certainly helps with montipora-eating nudibranchs which are prone to hide in the folds of the coral. They have also been described as predating pyramid snails which can infest and kill clams. Like most of the wrasses, the sex of the yellows is variable. The male is larger and more vividly marked across the face. Adding a second, smaller, yellow wrasse usually results in a mated pair that will happily follow each other through the tank. As they become sexually mature you may also see the female rushing up and down through the water column as if she was waving to the male. Just before the lights go out for the night, she will shoot across the surface of the tank releasing eggs, which are fertilized by the chasing male. Of course, the eggs become a snack for the other fish chasing them, but the spawning is a pretty interesting event to watch. This happens every few weeks and is easily predicted by the female looking full of eggs and swollen. Should you decide to try any of the Halichoeres species, bear in mind they require a soft, fine, sand bed in which to sleep. This is also a key component of any QT system you may house them in prior to addition to the tank. For the most part they are voracious eaters, and seem to accept a vast variety of prepared foods, mysis being the most preferred commercially available foodstuff. 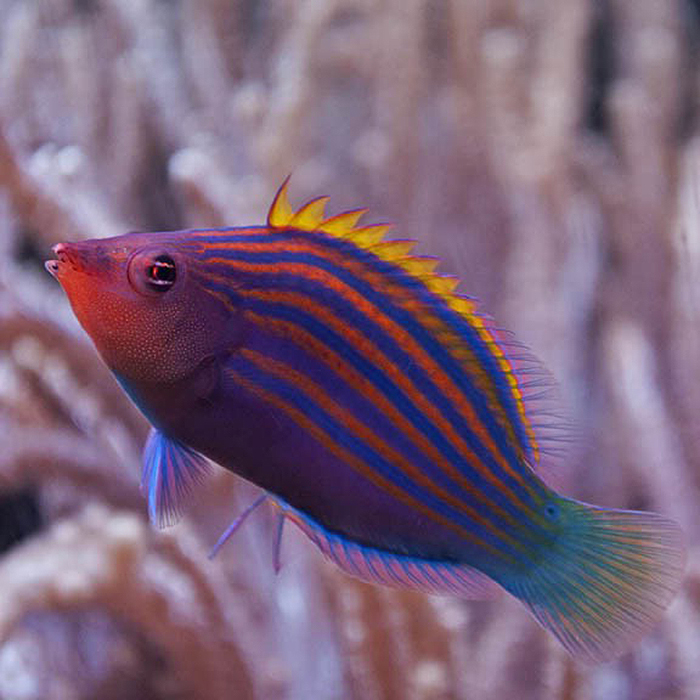 The six lines (Pseudocheilinus hexataenia) I have owned have also been from a functional perspective. The small size makes them excellent for penetrating zoanthid colonies and montiporas in the hunt for nudibranchs. While I have owned pairs, and had them spawn, I really do not recommend two in a tank unless they are both added as small specimens into a large system. Mainly, this is due to the fact that they can become quite aggressive as they become older and will attack any like colored fish. They are however, absolute death to red flatworms and will gorge themselves on these little beasties. 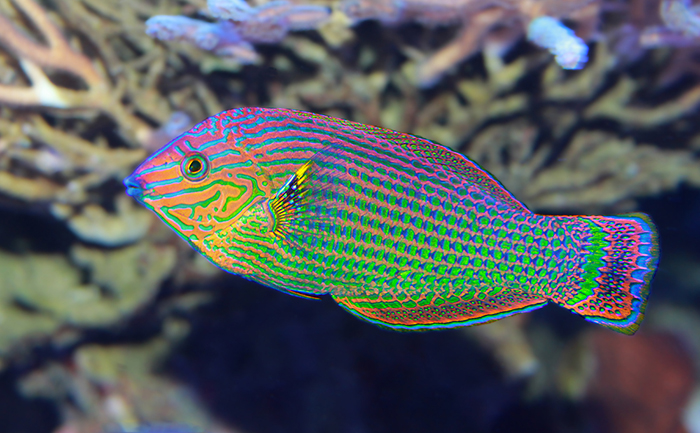 So those are my reasons behind my love (addiction) of the wrasses. They provide, color, motion and guard against pests. They are always on guard and can help prevent a problem before it occurs. This is especially so for the Halichoeres spp. and the six/eight lines. In closing, I would like to say that the various leopards, potters, rhomboids, flames and other wrasses that I have owned all have such wonderful characteristics and were purchased from a functional perspective – but those I really did buy because I simply had to have them. Maybe I do have a problem after all?