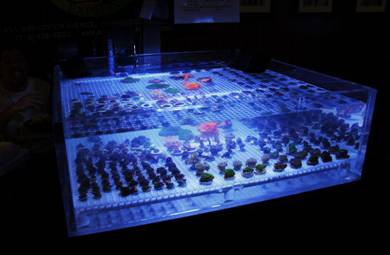 November 23, 2008 Manhattan Reefs held its annual Fall Frag Swap at Pace University in downtown Manhattan. As usual, it was a star-studded event full of education, socialization, and consumerism. Sixteen vendors took over the space with displays of corals, fish and dry goods, some from as far away as Maryland and Michigan. Over three hundred people came to the event with their coolers empty and their pockets full, and most left in a condition quite the opposite. 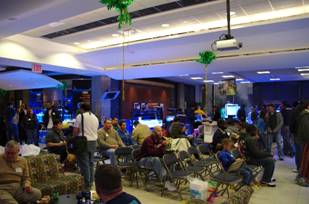 Manhattan Reef’s own Randy Donowitz was the master of ceremonies. He introduced both of the speakers. The first was Ken Feldman, an organic chemist from Penn State University. Aside from touting the somewhat debatable prowess of the Penn State football team, Dr. Feldman discussed the role of dissolved organic carbon in the reef aquarium. In his experimental studies, he found that dissolved organic carbon (DOC) affected coral health more than many other compounds in our tanks, including phosphates and ammonia. To determine the DOC levels in our aquariums, how they relate to natural reefs and how they change over time and how skimmers affect DOC, Ken reported on data collected from his reef and other reef aquariums. DOC tends to spike directly after feeding and about four hours after the lights come on. It is produced mainly by corals, and it can be removed from reef tanks with granular activated carbon (GAC). In another experimental study, he showed that tanks without skimmers that ran GAC had lower levels of TOC than tanks that ran skimmers without GAC.

The second part of Feldman’s talk concentrated on skimmer performance and efficiency. Those who have been in the hobby for longer than five minutes have certainly been treated to skimmer rhetoric, such as: “Bigger skimmers are better!” and “Darker skimmate is better!” and, my own favorite, “Real reefers use Becketts!”. Feldman did a study of four different skimmers based on different skimming technologies and found that there was very little difference between them and none of them removed more than 30% of the dissolved organic carbon in his reef system. I cannot be sure, but I think at this point I heard the sounds of someone softly weeping in the background after spending an unholy amount on an enormous skimmer in his bid to become a “real reefer”. Feldman also showed that the color of skimmate is immaterial – it is the dry weight of the matter that is removed from the system that is of interest. His bottom line on skimmers was that the smaller the bubbles, the farther those bubbles have to travel to get to the skimmer cup, and the more water that can be held in the skimmer, the better the skimmer will skim regardless of its brand.

The second talk was given by Kevin Gaines from Quality Marine on the fish supply chain. A lot of the fish that appear in local fish stores are not collected responsibly. They are often collected far from shore, held in small, non-aerated containers for as long as 14 days, and are not even fed prior to landing at a wholesaler. This results in fish that are not as healthy and disease resistant as a fish that is collected responsibly. Quality Marine is trying to promote safe and responsible fish collection in third world countries. They help outfits in Indonesia by teaching them techniques for proper underwater handling of the fish, proper holding facilities on the dive boats, and proper holding of the fish prior to export.

They are also sponsoring a “look for the label” campaign. All fish that come through Quality Marine will be given a label that states the arrival date at the wholesalers, the location it was collected from, as well as the scientific name of the fish. Seeing this label would alert consumers that that particular fish was handled properly throughout the supply chain. While a fish that has been handled properly might cost a little more, if we take a long view (I know, a difficult thing to do in today’s economy) it will ultimately cost less as that fish will be healthier, less stressed, and less likely to die in our reef tanks.

The Manhattan Reefs frag swap is always a family friendly affair. Aside from the talks, Mike (slamajama) gave three demonstrations on how to frag corals – SPS, LPS and zoanthids. The front row for the first demonstration was almost entirely filled by students from Mr. Wynne’s fifth grade science classes from PS 58 in Brooklyn.

There were also plenty of places to take a quick time-out if, for instance, your wife told you it was your turn to feed the baby if you wanted any more money to buy corals. 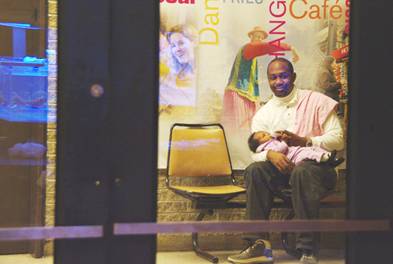 Staple events at the MR frag swaps are the coral auction and the raffle. The corals in the auction are cherry picked by the MR moderators from donations from members and vendors alike. They were auctioned off with panache by Jim Curry in his role as MR auctioneer. Some of the pieces auctioned off were a big piece ofEfflatournaria donated by James Chou, two ORA Acropora frags donated by Pedro all the way from Portugal, as well as many generous donations from Greenwich Aquaria, House of Fins, Atlantis Marine World, ORA, Quality Marine, and our awesome vendors and members. The raffle was orchestrated by Kathy C., our resident rafflemeister. Dozens of items were raffled off, including skimmers, lighting systems, coral gift certificates, and a uv sterilizer. The top prizes were an EcoTech Marine vortech MP40w propeller pump and a 15g Biocube donated by Steve at Wonderful World of Fish. Steve (MOIDOL) walked off with the vortech, Andrew (asianer) took home the Biocube, while the rest of us who dumped tickets in the same buckets went home with empty hands and sadness. 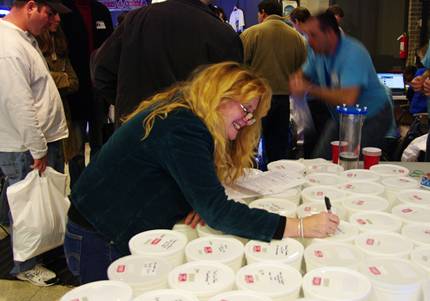 All in all, the 2008 Fall frag swap was an unqualified success and we hope to see you all again on April 26th, 2009 for the Spring Swap at Pratt Institute in Brooklyn.