How to Grow Corals Quicker: Effects of Various Alkalinity Concentrations on Rates of Zooxanthellae Photosynthesis

Photosynthesis is the link between inorganic and organic worlds, and the importance of contributions made by zooxanthellae in maintaining health of photosynthetic corals is well known. We also know that rates of photosynthesis are dependent upon the amount of light, its spectral quality, as well as a supply of nutrients (for terrestrial plants, ‘nutrient’ is generally defined as nitrogen, potassium and phosphorus with ‘micronutrients’ described as iron, copper, and a host of others.) Though not listed as such, inorganic carbon (in the form of carbon dioxide) is an important nutrient in that it is necessary for plant growth and production of simple sugar. In marine aquaria, nutrients such as nitrogen and phosphorus are usually in such supply that means of removing them are often necessary. Potassium, with a concentration of about 400 mg/L, is also in good supply, and micronutrients might be added or replenished through feeding or water changes. But what of carbon? While it is true that some carbon dioxide may be present in an aquarium, and corals’ respired CO2 can meet some of photosynthesis’ carbon demand, some of the carbon used by at least some zooxanthellae will be provided by bicarbonate dissolved in the aquarium water.

Liebig’s Law states that photosynthesis is controlled by not the concentration of the most abundant nutrient, but by the supply of the least – the weakest link will define the rate of photosynthesis. This fact is well recognized by freshwater planted enthusiasts and nutrient additions are routinely made to prevent the general plant ailment known as chlorosis. As such, we are the master of the microenvironment we have created.

Reef aquarists should routinely monitor the alkalinity content of their aquaria as it is important for a number of reasons. Alkalinity acts as a buffer against downward shifts in pH which is important since the nitrification process destroys it. Carbonates and calcium are essential in formation of corals’ skeletons. But what of its importance in acting as an inorganic carbon source for photosynthesis?

To answer this question, experiments were conducted to test the hypothesis that alkalinity concentrations could affect the rates of photosynthesis.

Natural seawater in a 10-gallon (38 liter) aquarium was spiked with ammonium hydroxide, and the nitrification process (conversion of ammonia to nitrate) reduced alkalinity to an unnaturally low concentration over the course of a few weeks. Once fully nitrified, half of this water was transferred to a five-gallon (19 liter) aquarium which contained a rack fashioned of plastic egg crate material. Fragments of the stony coral Porites lobata (glued to ‘reef plugs’) were then placed on this rack. Lighting was provided by a LED luminaire (dimmable) made by BuildMyLED (Austin, Texas, USA) and maintained at a sub-saturating intensity of 100 µmol·m²·sec as measured by a LiCor quantum meter and submersible LI-192 2 sensor (LiCor Biosciences, Lincoln, Nebraska, USA.) A tunze 6040 (tunze Aquarientechnik GmbH, Penzberg, Germany) variable speed propeller pump moved water in this aquarium. 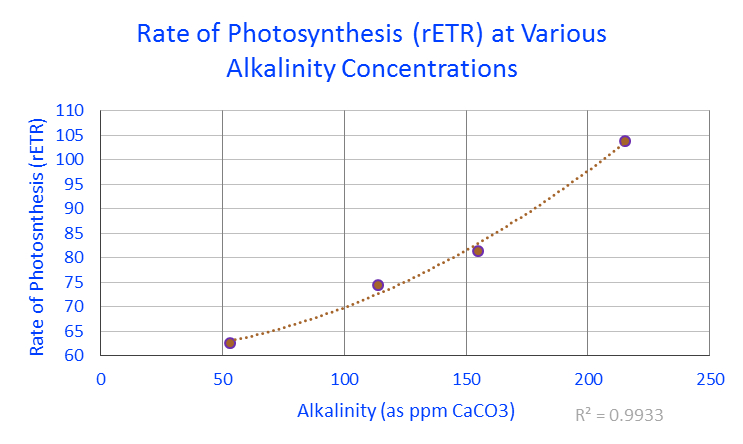 The result of these experiments demonstrated that the rate of photosynthesis could be boosted by about 29% by increasing alkalinity from a ‘normal’ level (6.4 dKH) to an elevated level (~12 dKH.) 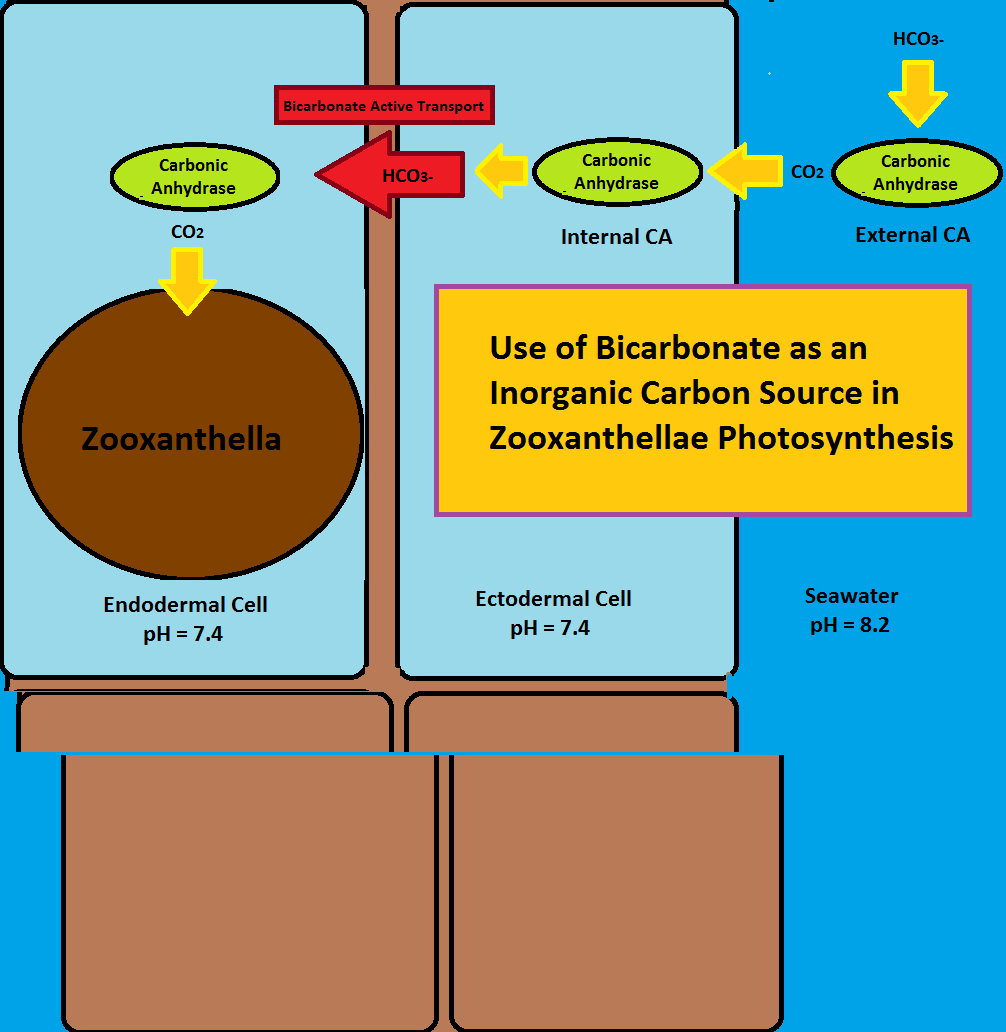 Figure 2. Use of bicarbonate (HCO3-) as an inorganic carbon source for photosynthesis. This involves the enzyme carbonic anhydrase (internal and external) and ‘bicarbonate active transport.’ After Zoccola et al., 2015. The ‘external carbonic anhydrase’ enzyme (top right) is actually attached to the coral’s ectoderm cell, something this drawing does not accurately reflect.

Most carbonic anhydrase enzymes contain zinc, although it has been recently discovered that some of these enzymes found in marine diatoms contain cadmium in lieu of zinc. This is the first helpful biological function known to utilize cadmium.

CA can be external (to the cell wall) or internal. 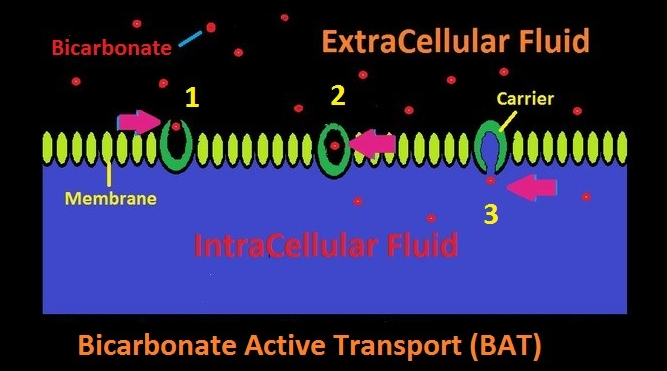 While this experiment found that Porites lobata’s rate of photosynthesis could be influenced by the concentration of bicarbonate ions, there is evidence that such is not the case with all corals’ zooxanthellae.

Brading et al. (2013) researched the inorganic carbon preferences of two zooxanthellae clades and found they differed. They found that zooxanthellae clade A13 preferred to uptake and fix carbon dioxide, while clade A20 could utilize bicarbonate as well. (Clade A13 is known to infect the jellyfish Cassiopeia frondosa, the anemone Condylactis gigantea, and the Atlantic stony corals Porites astreoides and Montastrea annularis, while A20 is considered to be free-living and is not known to associate with any invertebrates.) Hence, blanket statements concerning the degree of utilization of bicarbonate by zooxanthellae cannot be made. Although not tested for this experiment, it is generally accepted that Hawaiian Porites lobata corals contain the zooxanthellae clade C15.

Figure 4. When viewed under a black light, chlorophyll’s red fluorescence is apparent in this Acropora coral. A blue-green fluorescent protein is seen as well. Compare the areas of red fluorescence to those showing tissue loss in Figure 5. Photo by the author.

An interesting thought runs as follows: Some corals might not possess many (or any) external carbonic anhydrase enzymes. Hence, their dependence upon respired carbon dioxide might be much greater than those with external CA. Hence, coral growth rates might be slower than those with the ability to utilize relatively easily obtained bicarbonate.

‘Alkalinity Burn’ – Is an Increased Rate of Photosynthesis Responsible?

‘Alkalinity Burn’ is a term coined by reef aquarists about tissue loss (usually in the ‘tip’ or, in the case of Acroporids, the apical and near-by axial polyps.) Is it possible that chlorophyll concentrations in certain areas and the by-products of photosynthesis such as hydrogen peroxide and oxygen radicals overwhelm the natural defenses offered by enzymes such as peroxidases and catalases?

Compare the areas of chlorophyll concentrations in Figure 4 to those areas of an Acropora species suffering from ‘alkalinity burn’ in Figure 5.

As Figure 5 shows, tip burn is prevalent in areas receiving the most light, hence an elevated level of bicarbonate could turbocharge photosynthesis resulting in production of detrimental oxygen species.

Indeed, Finelli et al. (2006) discuss the link between coral tissue thickness and damage by ‘harmful levels of oxygen.’ Their discussion concerned water motion and photosynthesis – that will be our topic for next time, along with synergistic effect of bicarbonate.