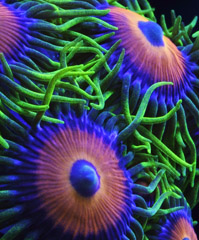 Amanda Davidson writes, teaches and makes performances, in Brooklyn and online at partedinthemiddle.wordpress.com. Her chapbook, 40,000 Acres of Water, is forthcoming this fall on New Herring Press.

Brian Cook is an artist and graphic designer from South Florida, presently living in New York City. He is pursuing his graduate degree in the History of Art at Hunter College and is currently employed in the Writing and Tutorial Center at the Pratt Institute. In March of 2014, he finally started up his first 20 gallon reef tank, learning much from many of the best hobbyists in the country.

James Fatherree is a science instructor at Hillsborough Community College in Tampa. He has been keeping marine aquariums for 20 years, and has spent many days diving in Florida, the Bahamas, Hawaii, Japan, and Indonesia, too. In the past, he also managed an aquarium store, owned and operated an aquarium installation and maintenance business, and worked for an aquarium livestock collector/wholesaler in Florida. James has also published over 250 articles in various aquarium magazines in the U.S. and Europe, and has written and illustrated several books on the topics of reef organisms and marine aquariums, the latest of which is Giant Clams in the Sea and the Aquarium. For more about the author, visit his homepage at www.fatherree.com/james, or look him up on Facebook.

Richard Aspinall has worked in the conservation field for over two decades and has been photographing the underwater world since he learnt to dive seven years ago. Richard is now a freelance writer and photographer and works for a number of magazines. Richard is also the editor of UltraMarine Magazine, the UK’s premier magazine for marine aquarists . Richard also shoots the world above the water line and runs another photography and journalism business: Aspinallink along with his wife Angela, he is based in Yorkshire, England. See more at: www.triggerfishphotography.com www.aspinallink.co.uk

Scott W. Michael is an internationally recognized writer, underwater photographer, and researcher that specializes in elasmobranchs (i.e., sharks, skates and rays) and coral reef fishes. He has written eleven books on the behavioral ecology and aquarium husbandry of marine organisms and his articles regularly appear in many international publications. Scott was the 1999 MASNA award winner. He has been keeping marine fishes for more than 35 years, with many years of extensive involvement in the marine aquarium industry, including a period of retail store ownership. Scott resides in Lincoln, Nebraska with his wife Janine Cairns-Michael (a displaced New Zealander and accomplished underwater photographer) and his golden retriever “Bella.”