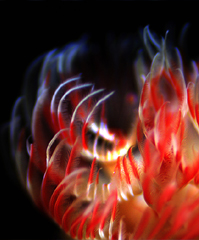 Christine Williams started keeping fish while she was still a fetus. While the aqueous environment did lend itself to the hobby, it limited her to freshwater species, and so she decided to be born several weeks early. Through sign language she demanded that her parents convert her crib into a reef aquarium and thus started her illustrious career in marine ornamentals. After completing her studies in biochemistry and molecular microbiology she went to work at “Animal ER” where unfortunately she was not filmed for the Animal Planet channel (though her feet did make a cameo during a rescue segment). Currently she is the head of the Industrial Marine Microbiology team for her division of a “very large international chemical company,” where she spends her days mixing chemicals, microorganisms and plankton together and seeing if they will A) explode, B) glow in the dark, or C) make a good salsa. In order to further her skills she is also a graduate student at Stony Brook University's School of Marine and Atmospheric Science.

James Passantino started reef-keeping in 2000 and kept one or more tanks until 2005 when he sold/gave away his belongings and took his meager savings to travel the Americas for a year after getting his master’s degree in Ed. Psych. He currently works as a middle school teacher in Brooklyn, NY and started up his new nano-reef late last year. He loves eating and drinking to excess, traveling, writing, SCUBA diving, rock climbing and experiencing anything new to him. He doesn’t love anchovies, mushrooms or carnies.

Matt Wandell is an Aquatic Biologist at the Steinhart Aquarium, California Academy of Sciences in San Francisco. He has been an avid reefkeeping hobbyist since 1999 and completed his BS in Marine Biology from UC Davis in 2004. When he's not feeding his anthias 6 times a day, he is busy maintaining the Aquarium's 200,000 gallon Philippine Coral Reef exhibit.

Janine Tirone is a brooding, twenty-something perpetual student who has been keeping animals of various phylum for her entire life, most of which she caught in the back woods of her parent's Long Island home. Cursing herself for pursuing a career in the arts rather than veterinary medicine, Janine is finishing her BFA in Photography and Art History at Pratt Institute in Brooklyn, NY, where she assists fish whisperer/coral guru Randy Donowitz with his large reef systems. She maintains a small mixed reef in her apropos, artist mandated loft apartment, because rigorous course loads do not allow time for her to keep her one true love, the cephalopod, as a roommate. When not reefing or sleeping, Janine can be found hiding in Pratt's ambiguous chemistry lab performing various experiments (for fun!) or reading about her mistresses: biochemistry and molecular physics. Or you could just see her wandering the metropolis of New York city trying to pet other people's dogs.
Kevin Kohen earned his Bachelor of Science degree from Wright State University, and is an avid marine life photographer, lifelong aquarist and marine fish enthusiast. He was one of the early pioneers maintaining live corals in captivity back in the early 80's. He began his professional career in the marine fish industry working in a retail fish store, and then moved on to manage the operations of one of the largest freshwater and marine fish wholesale and import/export businesses in the Midwest for over eight years. From there, he ventured on to launch the LiveAquaria.com web site, and designed and oversaw the installation of the Drs. Foster & Smith Aquaculture Coral & Marine Life Facility. He currently oversees the operations of the facility, and is responsible for the acquisition of the animals, as well as their husbandry.

Michael Lukaczyn was introduced to marine aquarium keeping by his father at the age of five. Over the past 30+ years he has maintained various types of marine aquariums and currently has a 50 gallon non-photosynthetic reef. Michael served as a Sergeant in the Marine Corps and is currently the Assistant Director of Environmental Services for a St. John's Riverside Hospital in Yonkers, NY. When not maintaining his non-photosynthetic aquarium; he is either riding his single-speed mountain bike, swinging the kettlebell or enjoying life with his patient wife.

Chris Jury grew up in the Great Lakes state of Michigan, which is a part of the US about as far from a tropical coral reef as one can reside. Nonetheless he developed a strong interest in coral reefs and marine organisms and has been an avid aquarist for many years. As an undergraduate he worked at a large retail store as one of the saltwater gurus, gaining a great deal of practical experience with a variety of marine organisms. He is currently a Ph.D. candidate in biological oceanography at the University of Hawai'i at Manoa. He holds an M.S. in marine biology from the University of North Carolina Wilmington and a B.S. in zoology from Michigan State University. Chris is broadly interested in the biology and ecology of marine organisms, especially reef corals and other reef organisms, and has worked on projects ranging from ocean acidification research to coral reproductive biology, including work with the endangered Elkhorn coral (Acropora palmata). Chris has written for Advanced Aquarist Online magazine and Reefkeeping magazine and frequently gives lectures to marine aquarium clubs around the country. He is also an active member of several online aquarium forums, where he spends more time than he probably should.