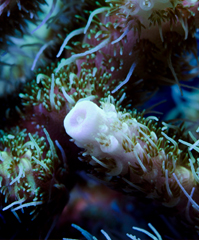 Chris Jury grew up in the Great Lakes state of Michigan, which is a part of the US about as far from a tropical coral reef as one can reside. Nonetheless he developed a strong interest in coral reefs and marine organisms and has been an avid aquarist for many years. As an undergraduate he worked at a large retail store as one of the saltwater gurus, gaining a great deal of practical experience with a variety of marine organisms. He is currently a Ph.D. candidate in biological oceanography at the University of Hawai'i at Manoa. He holds an M.S. in marine biology from the University of North Carolina Wilmington and a B.S. in zoology from Michigan State University. Chris is broadly interested in the biology and ecology of marine organisms, especially reef corals and other reef organisms, and has worked on projects ranging from ocean acidification research to coral reproductive biology, including work with the endangered Elkhorn coral (Acropora palmata). Chris has written for Advanced Aquarist Online magazine and Reefkeeping magazine and frequently gives lectures to marine aquarium clubs around the country. He is also an active member of several online aquarium forums, where he spends more time than he probably should.

Janine Tirone is a brooding, twenty-something perpetual student who has been keeping animals of various phylum for her entire life, most of which she caught in the back woods of her parent's Long Island home. Cursing herself for pursuing a career in the arts rather than veterinary medicine, Janine is finishing her BFA in Photography and Art History at Pratt Institute in Brooklyn, NY, where she assists fish whisperer/coral guru Randy Donowitz with his large reef systems. She maintains a small mixed reef in her apropos, artist mandated loft apartment, because rigorous course loads do not allow time for her to keep her one true love, the cephalopod, as a roommate. When not reefing or sleeping, Janine can be found hiding in Pratt's ambiguous chemistry lab performing various experiments (for fun!) or reading about her mistresses: biochemistry and molecular physics. Or you could just see her wandering the metropolis of New York city trying to pet other people's dogs.

Jake Adams is a professional aquarist living in Golden, Colorado and he has written numerous articles and given many presentations on marine aquarium topics. Jake is the founder and organizer of the ReefStock conference and he is the senior editor of ReefBuilders.com, the popular daily reef aquarium news website that draws over 5000 visitors a day.

Matt Wandell is an Aquatic Biologist at the Steinhart Aquarium, California Academy of Sciences in San Francisco. He has been an avid reefkeeping hobbyist since 1999 and completed his BS in Marine Biology from UC Davis in 2004. When he's not feeding his anthias 6 times a day, he is busy maintaining the Aquarium's 200,000 gallon Philippine Coral Reef exhibit.