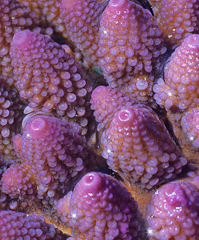 Brian Cook is an artist and graphic designer from South Florida, presently living in New York City. He is pursuing his graduate degree in the History of Art at Hunter College and is currently employed in the Writing and Tutorial Center at the Pratt Institute. In March of 2014, he finally started up his first 20 gallon reef tank, learning much from many of the best hobbyists in the country.

J. Charles Delbeek is Senior Aquatic Biologist at the California Academy of Sciences’ Steinhart Aquarium. Reopened on September 27th, 2008 the highlight of the Aquarium is a 212,000 gallon live reef display. His professional interests include the ecology and captive husbandry of marine fishes, corals, aquatic plants and cephalopods. In addition to writing a monthly reef aquarium column for Aquarium Fish Magazine and Coral Magazine, he has co-authored three popular aquarium books with Julian Sprung, The Reef Aquarium series, considered by many to be the definitive works in the field. Charles is also principal of JCD Consulting, www.jcdaquariumdesign.com.

Dr. Chris Maupin (Ph.D.) is an expert on the use of ICP-OES instrumentation for analyses of natural waters and carbonate materials, with experience spanning the past decade. He has been an ICP-OES operator, supervisor, and technician at the University of South Florida College of Marine Science and the Jackson School of Geosciences at the University of Texas at Austin. He has and continues to periodically serve as an unpaid technical consultant for the ICP-OES laboratory at the United States Geological Survey Center for Coastal Research. He is currently a Research Associate and Facilities Manager for the Stable Isotope Geosciences Facility at Texas A&M University.

Lemon TeaYK is a Singaporean aquarist with a deep interest for reef fish. His passion and pursuit for rare and exotic fish species has fueled his travels all across Southeast Asia, Japan, Australia and the United States, where he’s seen firsthand some of the best private home collections anywhere. His travels have allowed him to meet and talk to a myriad of industry experts, divers with niche specialization as well as relevant authorities of their respective fields, which bides his unquenchable thirst for knowledge. He is also an accomplished photographer and his photos are often used in magazines, books and other publications. At 22, Lemon is one of the youngest minds of the industry with a well-traveled repertoire and a deep understanding and knowledge on his expertise. Although well versed in other aspects of the hobby, his interests primarily lie in fish and he’s currently the senior editor for that department on ReefBuilders.

Austin Lefevre installs and maintains upscale aquariums and works closely with a local aquaculture facility propagating corals. Austin has been in the aquarium industry since 2003, working with marine fish and invertebrates, along with freshwater fish, plants and invertebrates. He's been an avid SCUBA diver since the age of 12 and consistently seeks new aquatic adventures.

Kenneth Wingerter contentedly resides in Connecticut, where he works as an aquarist for a leading aquarium services company. He studied in the Pacific Northwest, where he obtained a bachelor of science degree in Biology at the University of Oregon, as well as a certificate of completion in the Oregon Coast Community College Aquarium Science Program. His diverse interests in aquatic biology have led to projects ranging from tropical freshwater paludaria to temperate marine aquaria, and work ranging from wholesale aquarium fish sales to laboratory aquaculture.

Felicia McCaulley has experience in all levels of the aquarium industry. Since 2001, she has worked in one of the big chain stores, at one of the most recognizable online stores, in livestock wholesale, as a freelance aquarium photography/writing, and at four of the most prominent and well-known local fish stores on the east coast.