Keeping fish in appropriate social groups is an important step towards creating a dynamic and interesting aquarium. Fishes kept in groups display interesting social behaviors and some species will even spawn in good conditions. Males of many species will display the really vivid coloration that defines what we call “supermales” if there are numerous females around. Consequently, one of the most frequent questions I hear from hobbyists is “What fish will shoal in my aquarium?” 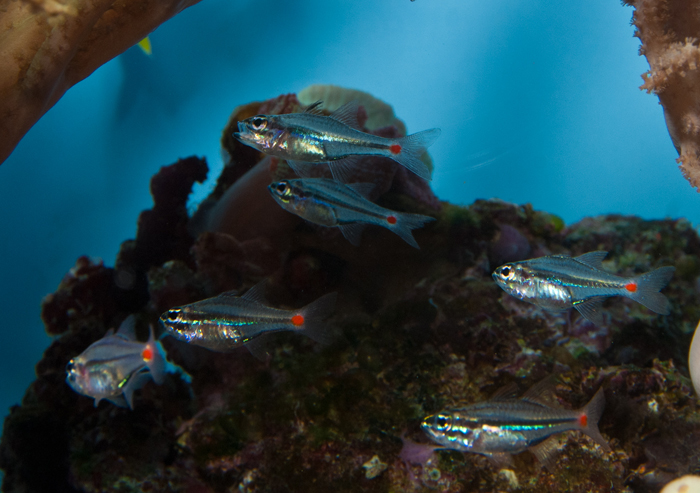 First, a bit of semantics to get out of the way— In the wild, any loose grouping of fish, even unrelated fish that tends to hang together can be described as a “shoal”. When a shoal is composed of a single species and moves in coordinated ways as a group, it is further described as a “school”. All schools are shoals, but not vice- versa. Got it? Good. Instead of a shoal, you can also call your group of fish a bunch of fish, a ton o’ fish, a draft, a run, a haul, a catch, or any other name you can come up with as far as I’m concerned. But if you call it a “school” you’d better be right, damnit, because improper usage is not tolerated on the Internet!

Some examples of fishes that regularly school in the wild are herring, sardines, fusiliers, and tuna. There are very few ornamental reef fish available for aquariums that actually school, and those that do typically drop this behavior in captivity. Why? No predators! Decreased risk of predation is one reason why fish school in the wild, but it also has other advantages. Studies of schools of juvenile herring show that the fish space themselves out at distances equivalent to the “jump” of their copepod prey. When a copepod senses a herring coming its way, it darts away to avoid it, but its jump length puts it right in the path of another herring. In the time it takes to load up for another jump, the fish has already eaten it. One herring alone could not easily capture a copepod, but by working together in a school they all get to eat. Neat huh? There is a lot more neat trivia about schooling fish that I could probably bore you to tears with, but for our purposes most of it is just that—trivia. Reef fish in aquariums don’t really school for the most part, unless you do something like add a blacktip reef shark to the mix.

So with the pedantic stuff out of the way, what are the best fish for creating a shoal in a reef aquarium? Although some species of Surgeonfishes (such as the Powder Blue Tang, Acanthurus leucosternon) and Angelfishes (The King Angelfish,Holacanthus passer) sometimes form large shoals in the wild, it should be obvious that trying to replicate this type of grouping in a home aquarium would be a recipe for disaster due to the extreme aggression of these fish in home sized aquariums. Certain Snappers (Lutjanus spp.) and Fusiliers (Caesio and Pterocaesio spp.) actually form true schools in the wild, but the adult size and activity of these fishes precludes forming a group of them in most home aquariums. Some smaller species of fish that seem like they would form good groups in an aquarium will fight to the death once they become sexually mature. Firefish (Nemateleotris spp.) and Damselfishes (Pomacentridae family) are great examples; they often fight amongst themselves to the point where only one or two fish remain after a few years. These fish may look “happy” as large groups of juveniles at fish stores, but this is a temporary scenario that will not last long. Some of the best fish choices for forming large shoals in aquariums are the Dartfishes (Ptereleotris spp.), Gobies (Gobiidae family) and the Anthias or Fairy Basslets (Anthiidae family). In future issues of Reefs Magazine I’ll show off some of my favorite species of these fishes and discuss the pros and cons of keeping a shoal of them in your aquarium. 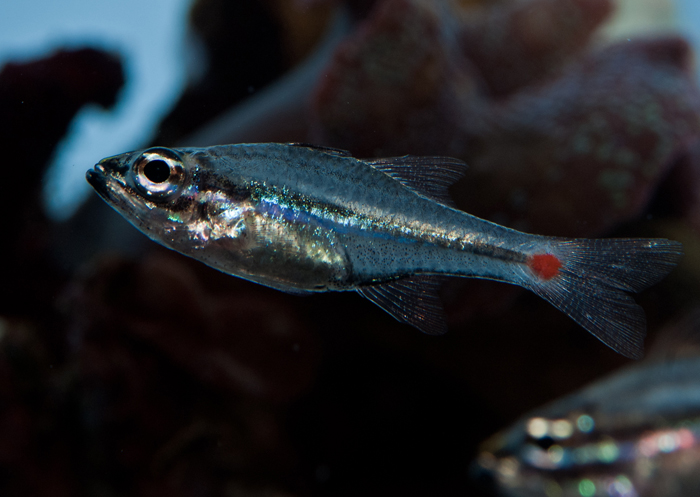 The Redspot, Dwarf, or Parvulus Cardinalfish (Apogon parvulus) is found throughout the Western Pacific. It reaches a reported maximum size of about 1.5” in the wild, about 1” in captivity, and sports an unmistakable red spot at the base of the caudal fin in contrast to its striped silver and blue body. Its small size and relatively peaceful demeanor toward conspecifics makes it an ideal species for creating a shoal in a small aquarium.

I remember seeing pictures of groups of these dazzling cardinalfish in Japanese reef tanks back in 2002, darting in and out between stands of branching coral colonies. For the first time it seemed possible to recreate the look of a real wild coral reef on a desktop scale. Along with other hobbyists at the time, I instantly thought “me want”. At the time, locating tiny fish that only grew to an inch or two as adults and could be kept in large groups was a very difficult task. The tiny Trimma and Eviotagobies were still largely unknown except for a few pictures on Japanese diving websites, and were virtually unheard of in the aquarium trade in the US or otherwise. These tiny cardinalfish seemed to be perfectly suited for aquariums and, if they behaved like most other Apogon spp., would get along well together in captivity. According to references they were relatively common in the wild and found in shallow water, and Japanese aquarists were somehow getting a hold of them. So where were they?

Until recently, Parvulus Cardinalfish were extremely hard to find in the US, and when they were sporadically available it was always a small handful of fish that for unknown reasons would perish within hours to weeks of being placed into an aquarium. Around 2007-08 the first reports of these cardinalfish appearing in Europe and the US were exciting to hear about, but were unfortunately followed up with disappointing results. Stories of 50% of the fish arriving dead, with the rest dying within days were not uncommon. The rare few that survived more than a few weeks would typically live 3-6 months at best. Some hobbyists hypothesized that the Parvulus Cardinalfish had a very short lifespan, perhaps only a year, and were simply dying of old age in aquariums after a few months. After a while, the widespread consensus was that Parvulus Cardinalfish should be left in the ocean.

Undaunted by these accounts, I decided in early October of 2009 to purchase a group of Parvulus Cardinalfish to add to a 24” cube exhibit at the Steinhart Aquarium featuring several large finger leather corals. Of the 18 purchased, one died during shipping and another died during the 30 day quarantine period. As of this writing 14 months later 12 of the initial 16 added to the exhibit are alive and apparently healthy. This experience seems remarkably different from what other people have historically reported, so what changed?

In late 2009 Kevin Kohen, director of LiveAquaria, wrote the following:
“(A. parvulus) have statistically suffered very high mortality rates, due mainly in part from poor post-harvest handling. These fishes need to be fed properly once imported and allowed time to rest and regain body weight before being shipped again.

We have received several great batches of these fish in the past month or so, with little to no mortality. This can be directly attributed to proper handling and conditioning. Once they arrive to us, holding them with small, less active and passive fish, and with intensive conditioning for a few weeks, they are rock solid fish.”

Since this writing, success stories with Parvulus Cardinals seem to be more and more common. Reports of heavy losses during shipping are less common and many are reporting keeping a majority of individuals for well over 6 months.

Like so many other marine ornamental fish, the ultimate state of health in the Parvulus Cardinalfish in captivity depends a great deal on how they are held and handled during the chain of custody from the tropical Pacific to a fish store near you. Although we can’t control how fish are treated during this process, we can make informed choices where we purchase fish and demand well handled specimens from the people who sell them to us. Talk to your fish store and communicate your experiences with fish you purchase from them, whether good or bad. A strong chain of communication from end purchaser back to collector is an important step in assuring we receive quality fish that live long and healthy lives under our care.

Parvulus Cardinalfish in the Reef Aquarium 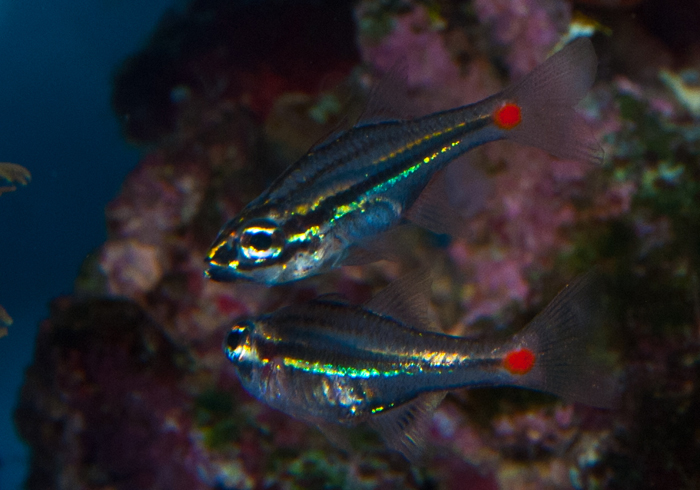 Assuming you’re starting with healthy specimens, Parvulus Cardinalfish are relatively straightforward to acclimate and keep healthy in a reef aquarium. They are found in the tropics in shallow water, so typical salinity and temperature in a reef aquarium will suit them fine. They seem to be able to easily adapt to a wide range of lighting and flow conditions.

The only significant challenge is getting them to eat prepared foods and feeding them a few times throughout the day. For the first 1-2 weeks Parvulus Cardinalfish may need to be coaxed to eat with live baby Artemia, Daphnia, Tigger-pods, and rotifers, or frozen Cyclop-eez and Arcti-pods. If the individuals are small, they may not accept adult brine shrimp, even live, right away. Good secondary foods to try are small Hikari mysis shrimp, and fish, prawn, lobster, or oyster eggs. In just a few weeks the majority of Parvulus Cardinalfish should be reliably eating small pellet food. It is important to feed your Parvulus Cardinalfish a few times throughout the day. I use an automatic feeder to drop 1mm pellets into their aquarium twice daily, and then feed them small bits of chopped up seafood on top of that. A productive refugium and mature tank will provide lots of feeding opportunities as well.

Because of their tiny size Parvulus Cardinalfish are potential prey items for a wide variety of tankmates. Hawkfishes, wrasses, dottybacks, basslets, and even larger cardinalfishes may snack on them if the size difference between predator and prey is large enough. Aside from very tiny crustaceans, you don’t have to worry about Parvulus Cardinalfish bothering much in your reef aquarium. However, newly added sexy shrimp (Thor amboinensis) and very tiny gobies may be consumed by adult Parvulus Cardinalfish.

If fed well and housed with tankmates that don’t harass them, Parvulus Cardinalfish may spawn regularly. Like all cardinalfish they are mouthbrooders; the male holds the eggs in his mouth until they are ready to hatch. There are no apparent external differences between the sexes, but males should be recognizable from their mouthful of eggs. The larvae are particularly small and may prove to be much more difficult to rear than some other Apogon spp. which have been reared successfully in captivity. Reports of spawning are fairly common but documentation of successful rearing of this species has not been demonstrated yet.

If you have any further questions about Parvulus Cardinalfish, I can be reached at mwandell@calacademy.org. Until next time, happy fishkeeping!