What is today is a reflection of what was yesterday. 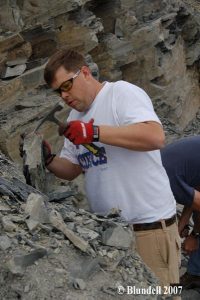 If you spend enough time in this hobby you are sure to have several of those conversations. The conversations that explore the greater diversity of fishes and their evolutionary history. I’m still dumbfounded on how the fishes have evolved. They inhabit nearly all areas of the Earth. Keeping in mind that the Earth is roughly 70% covered in saltwater (an average depth of several thousand feet), and only 0.036 percent of the planet’s water is in rivers and lakes. (reviewed on howstuffworks 2007) Yet around 10,000 species of fishes are freshwater fishes… about half of all fish species.

While I may never understand this, I certainly appreciate all the informative discussions I’ve had with friends over the years. This article is dedicated to those who have helped me to see the bigger picture.

Fellow author and lecturer James Fatherree recently spurred on a fossil digging exercise. I was fortunate enough to join in on this trip to the desert. And what a trip it was. Imagine taking a bunch of fish geeks out on an all day trip to dig in the dirt. It was even better than that. 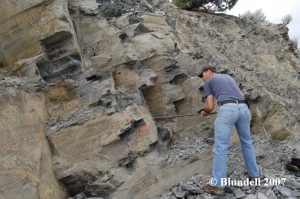 Attending this trip were people all involved with a hobbyist club, but also involved in many other areas. It included: James Fatherree (author/lecturer), Adam Blundell (Aquatic & Terrestrial Research), Jake Pehrson (Coral Planet), Shane Silcox (Desert Reef Aquatics), and Will Spencer (Wasatch Marine Aquarium Society). The plan was to dig up as many prehistoric fossils as you could. This was the easy part. We found hundreds, honestly hundreds of fossils. The second goal was to carefully remove these fossils from the surrounding rock… this is where we failed. In case you were wondering fossils that are 500 million years old (mid-Cambrian) are simply put; very old. They break easy. It is frustrating. Get over it.

The fossils we found (and were looking for) are called Trilobites. Trilobites are now extinct but there were marine invertebrates living in huge numbers in ancient oceans. And yes, these marine fossils are now located 1,000 miles from the nearest ocean. Proof once again that the Earth itself is in fact alive and ever changing. 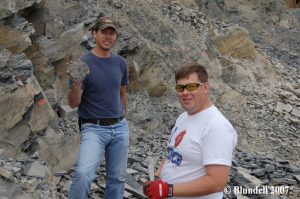 Not far from the House Range location of Trilobites you can find the Fossil Butte area. Seperated by maybe 500 miles… and 400 million years of evolution. Yes, a 500 mile drive will take you to an area of great fossil abundance but over 400 million years different in age (Eocene era). What is more interesting, these Eocene era fossils are in fact freshwater. And while driving that 500 miles you’ll cross over the remains of hundreds of dinosaur fossils. In deed this great land of ours is filled with amazing fossils; unfortunately they are just below the surface and therefore out of our daily sight. 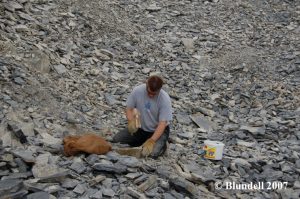 Shown here a few of the participants digging away.

Now as a way of confusing hobbyists even more I’ll point out that marine Trilobites are found in the Western United States… as well as Spain. Indeed once again we see how the world has changed and how marine life has lived for eons. Please take some time to learn about the history of life outside your front door. There is a lot of history out there worth finding.

The first step in preparing fossils is to find fossils. This can be an all day affair of digging for nothing in return. Thankfully some commercial operations exist and some well traveled public areas that are nearly sure fire for finding fossils. 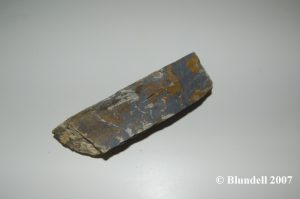 This photograph show the shale rock which can be splintered to find the fossils.

The second step is to remove as much of the surrounding substrate as possible. I’ll give you my warning that this is the most difficult step. I’ve ruined several fossils because honestly I’m not too good at this step.

The third step is the fine cleaning stage. Some people use a toothbrush or cloth to clean off delicate areas. Some fossils are stained with a solution to help differentiate the fossil material from the surrounding strata. Whatever type of fine cleaning you use, I highly recommend practicing first. Nothing is worse than investing 100 hours to clean a fossil, only to ruin it at this stage. When it doubt, don’t do it. I like to use water and a toothbrush, but that is all I risk using at this stage.

Finally it is time for the fossil to find its new home. And of course some fossils are put in display cases while others end up in a storage closet. 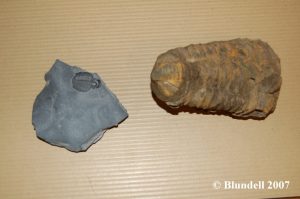 Also, continents apart you can find trilobites of varying forms and sizes.

I would like to thank James Fatherree for being the catalyst in this article. I appreciate his friendship and his enthusiasm for prehistoric aquatic life. I encourage all readers to investigate the fossils found in their neck of the woods. You may not think that learning about fossils will help you as an aquarist. Indeed you may be correct. But it will certainly help you in understanding the great history behind those colorful little fishes sitting in your living room aquarium. 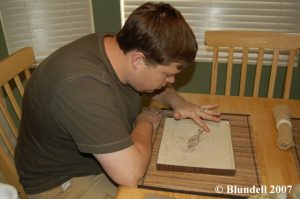 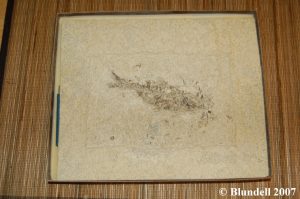