Three months ago I began a new project to test old hydrometers. The purpose of the test was to compare several old, very used, hydrometers with other “more accurate” devices. Currently the marine aquarium hobby uses refractometers as the gold standard for measuring salinity/specific gravity. Therefore a recently calibrated refractometer was being compared side by side with several hydrometers. 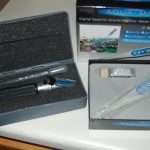 This project is temporarily on hold. Initial data is presented below. However new information has been published since the inception of this project. Unknown to this author a good friend and fellow author was also studying this concept. My friend Steven Pro recently published his results (Pro, 2006) in the online magazine Conscientious Aquarist, and can be found here. Steven’s tests include using brand new hydrometers straight out of the box. My test was designed to use old and well used hydrometers. Anyway the project will continue as Steven and I are now discussing ways to improve the tests, and ways to combine the research. 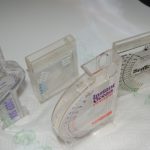 At this stage of the project I have used 1) a recently calibrated refractometer 2) an electronic salinity measuring device with a digital readout 3) and four used plastic hydrometers. These devices were all used to measure 5 different aquariums. The refractometer was recently calibrated (the purpose of this test) and the digital instrument was brand new still in the box. That digital did come with calibration solution. The instrument was tested with that solution and found to be accurate out of the box.

At this stage I am only presenting opinion. No statistics have been performed and I admit that the condition of the hydrometers is not something I could reproduce. It is my opinion after seeing these results that plastic hydrometers are perfectly acceptable for use in the hobby. I would say they are even acceptable for use in research. Their precision appears to be well within the range of projects I’ve seen conducted in laboratories. Their accuracy is variable, but with a known (and easily found) correction factor these hydrometers perform quite well.