The last article reported test results on some LED fixtures. This article presents results on lighting output for some more LED fixtures available in the market. Table 1 presents a list of the LED lighting fixtures reviewed in this article. Each of these was tested using the same set up as my previous reflector tests, using a 3’X3′ grid with a spacing of 3″ in the X,Y direction. The fixtures were centered on this grid, and PAR was measured as PPFD (Photosynthetic Photon Flux Density) in micromoles/m2/sec using a LICOR 1000 data logger and a LI-192SA underwater cosine corrected sensor calibrated for both air and water. The data logger was set to average 5 readings for each data collection point. The data was imported into Microsoft Excel for analysis and the data was plotted to display the light spread and intensity at various distances. 4 plots of the data with 2 plots at each distance were generated showing:

ReefFanatic’s 120W LED Pendant. It has a 1:1 ratio of blue and white LEDs arranged as 3 banks of LEDs. Each bank can be individually shut on/off using the on/off buttons on top of the pendant. A digital timer is integrated with the unit. Since the LED fixture looked very similar to the Blue Moon 90W tested earlier, and the major difference seemed to be in the number of LEDs being used, it was decided to test this at 18″ and 24″. As tested the fixture drew 130W of power, 1.1Amps current at 120 Volts, with a power factor of 0.99. Cooling of the LEDs is provided by fans built in to the fixture. The distribution of light is shown in figure 1. 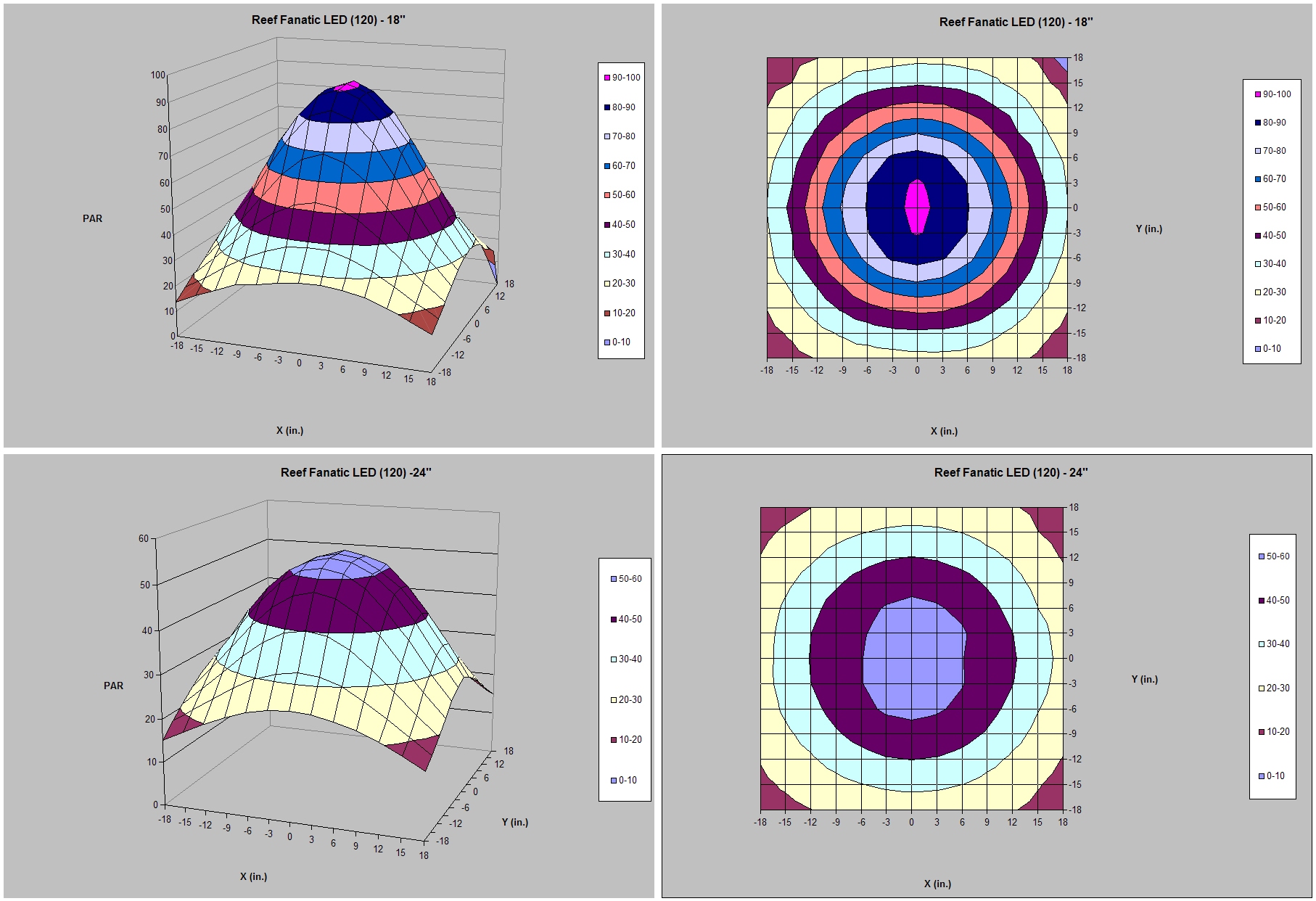 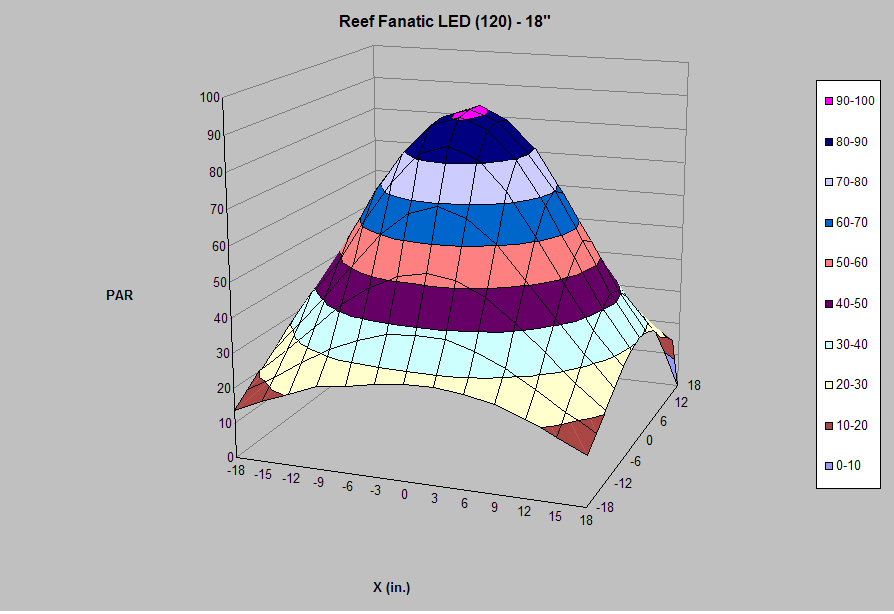 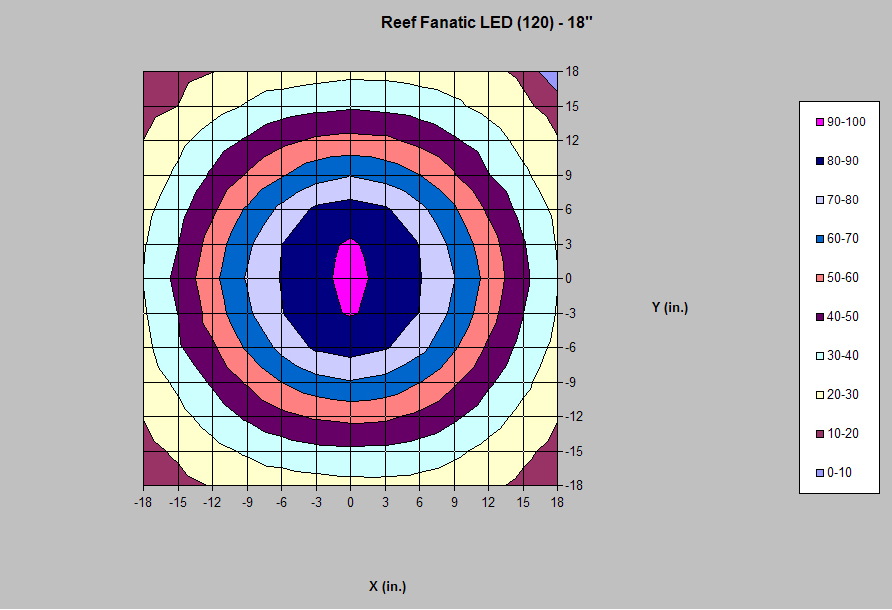 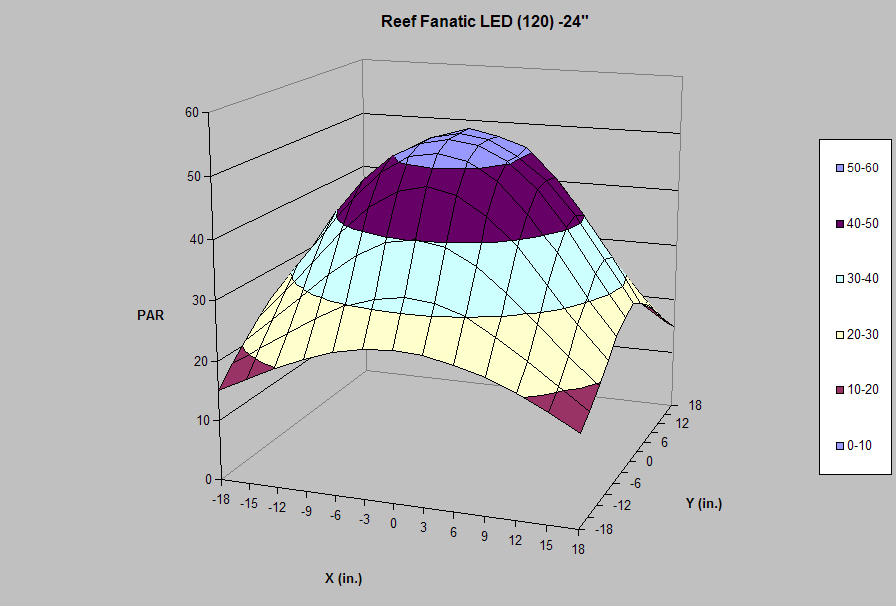 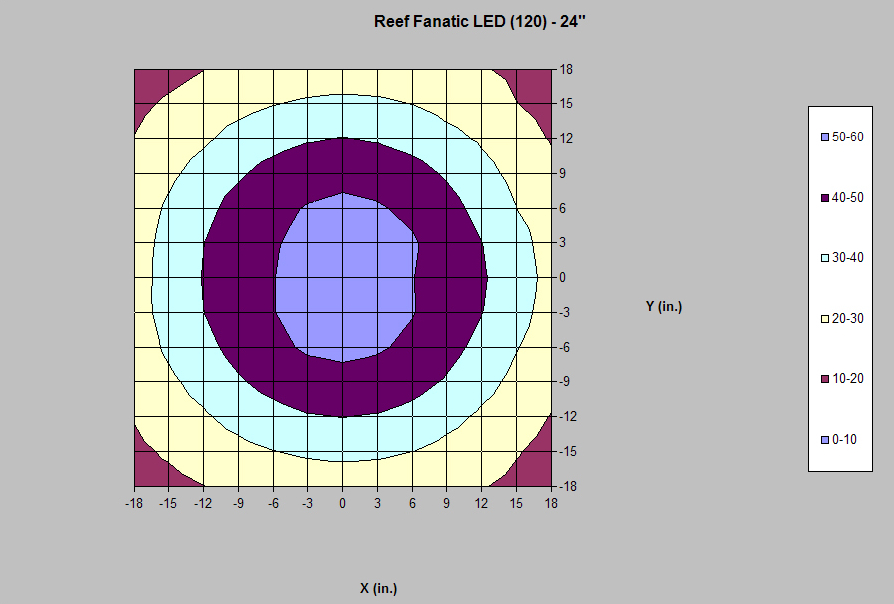 The Ecoray 60 has 60 1W LEDs arranged in a 6X10 grid, with a equal mix of blue and white LEDs. Unlike the Reef Fanatic LEDs, these LEDs also have integrated optics which help focus the light by reducing the wide spread of the LED light. These were tested at distances of 18″, 24″ and 30″ to assess the distribution of light. As seen from the data, the additional optics clearly focus to light to achieve high PPFD values. This light would be ideally suited for deep tanks (even greater than 30″ deep), or allow for higher placement of the light above the tank surface. As tested the Ecoray-60 draws 62W of power, .54Amps of current at 123V, with a power factor of 0.95. 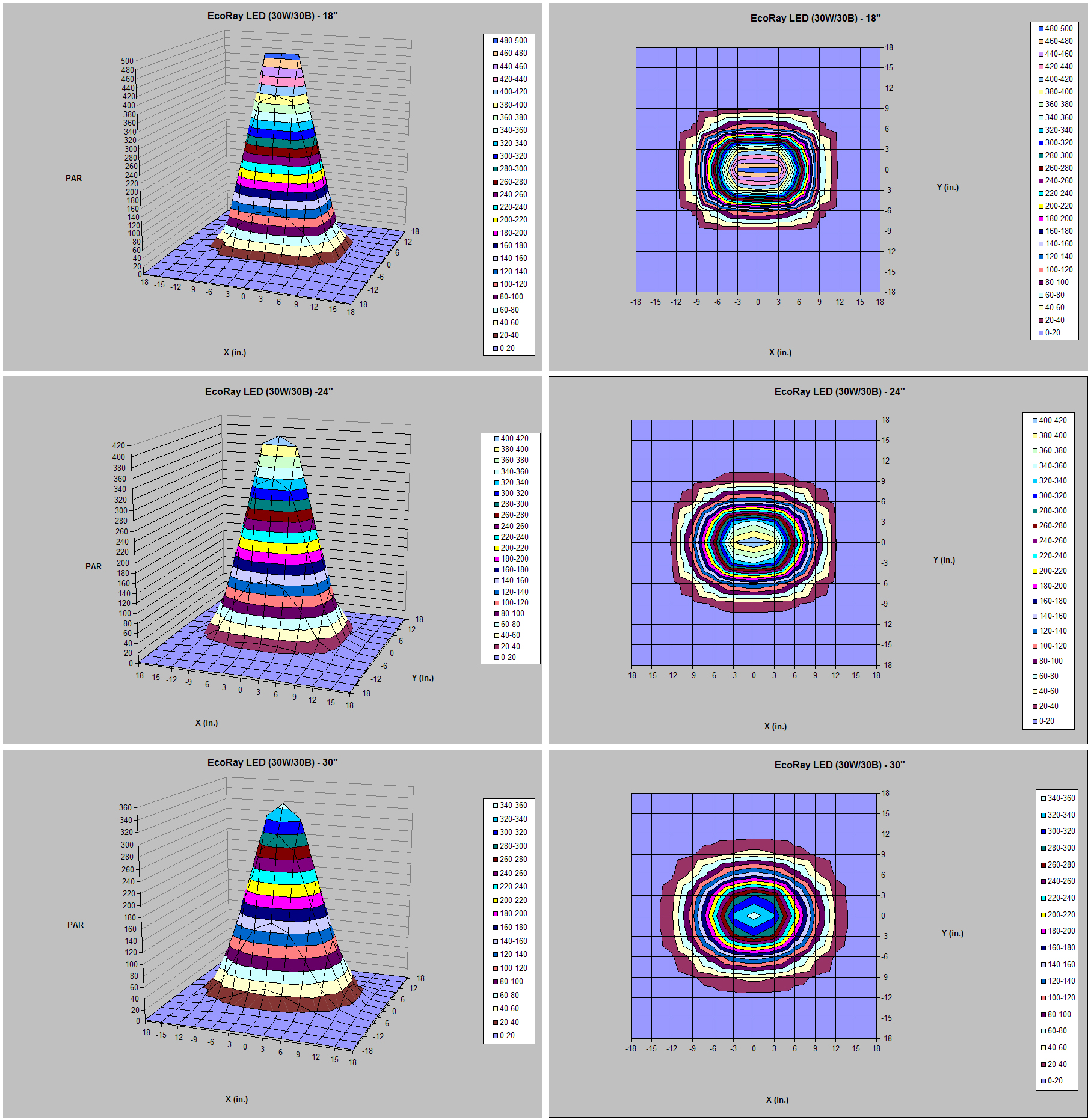 Figure 2: Light distribution for the Ecoray 60 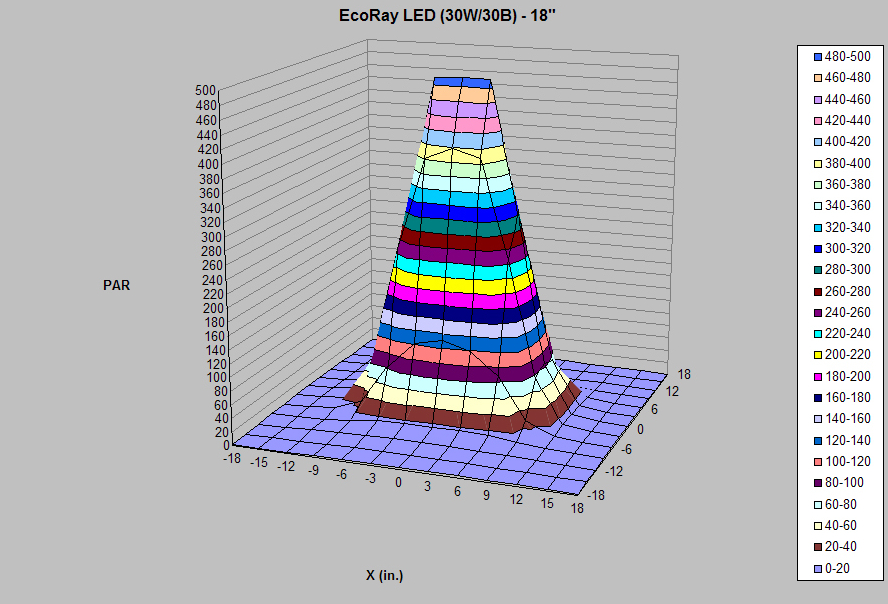 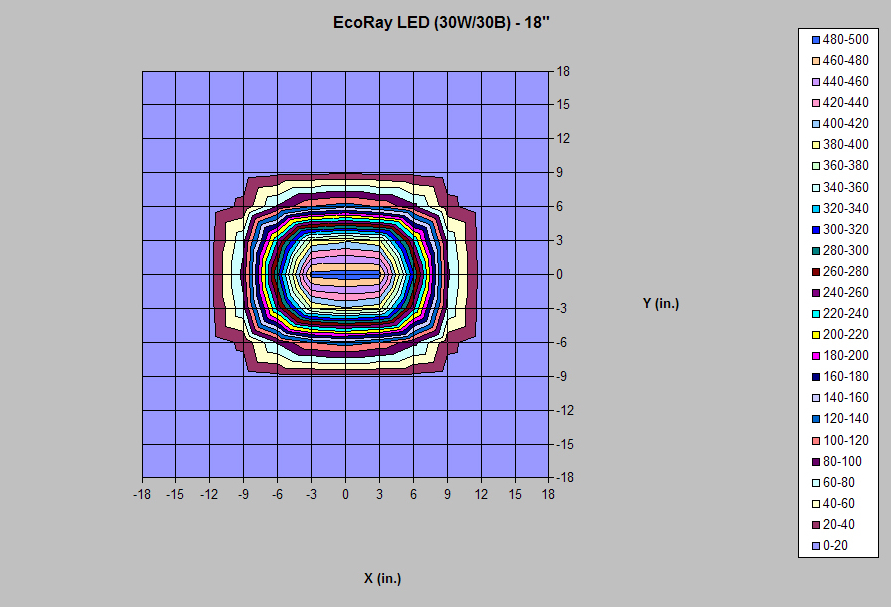 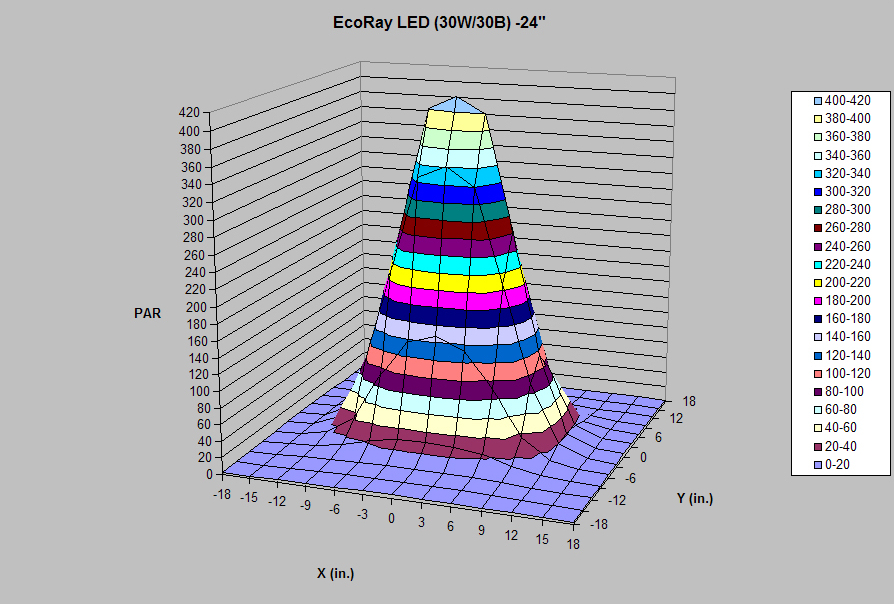 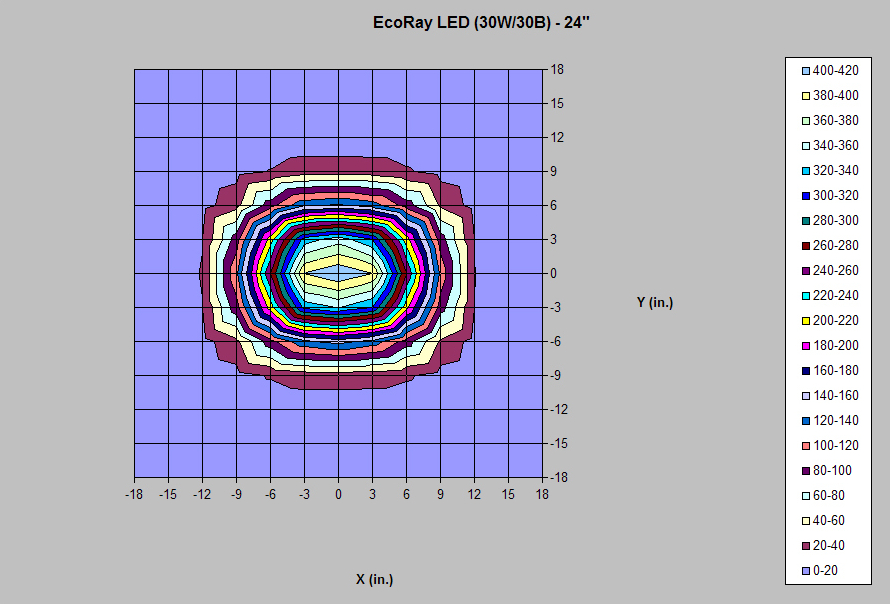 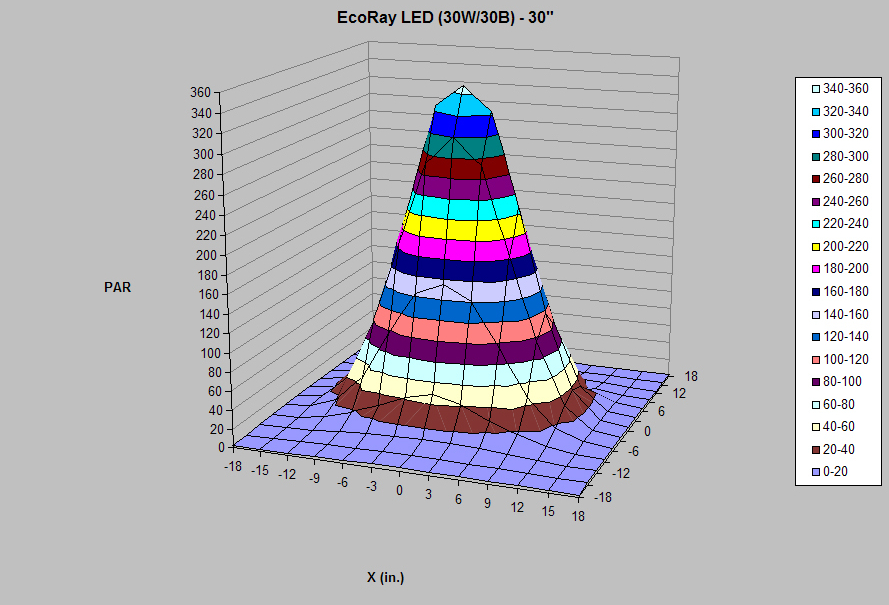 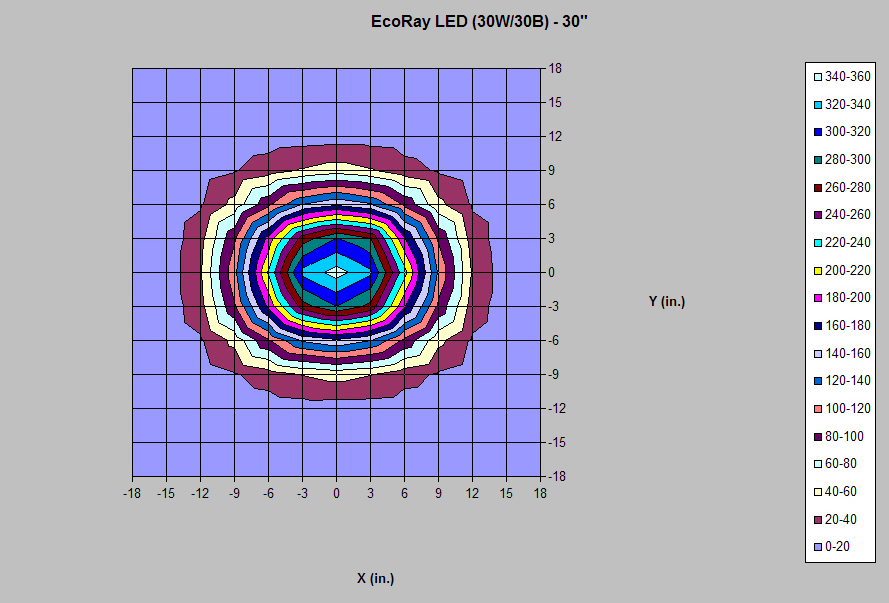 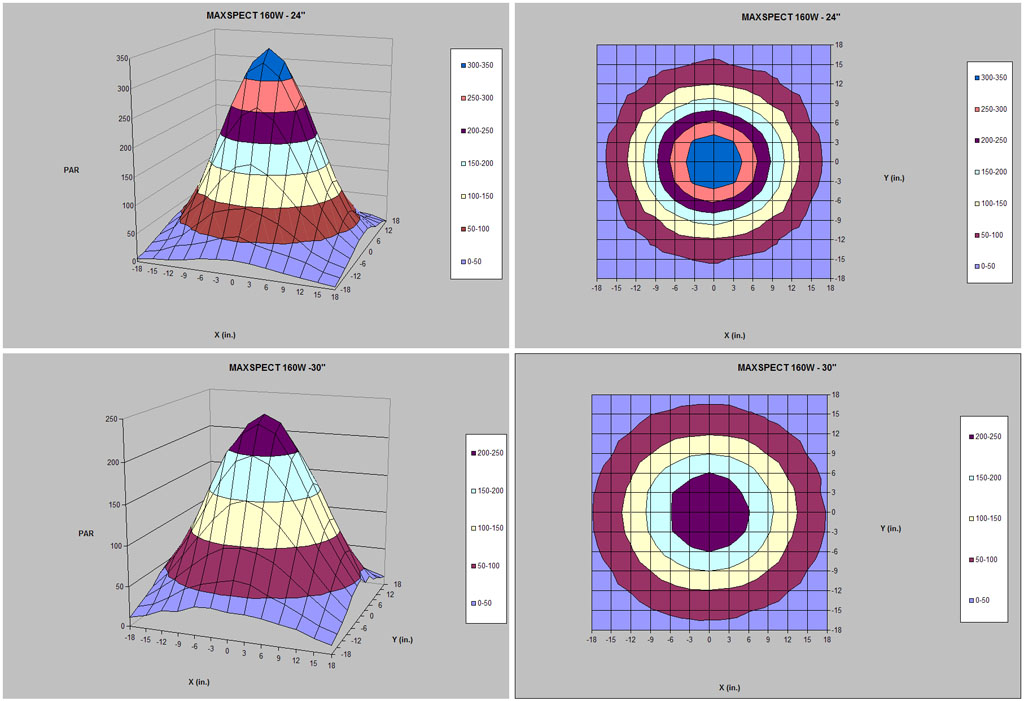 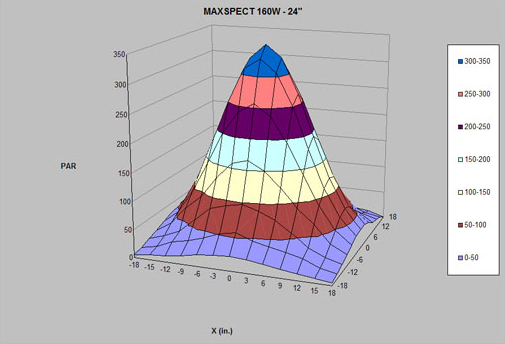 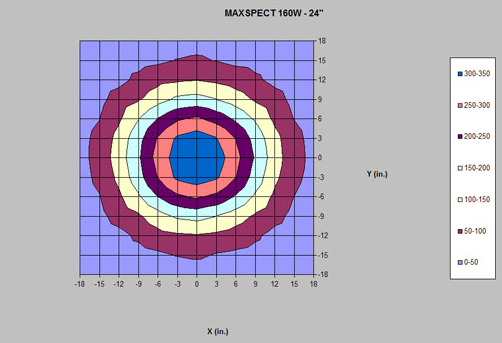 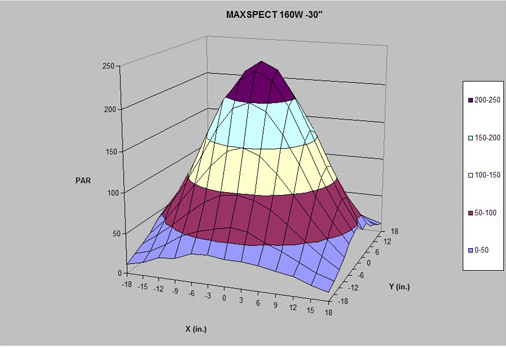 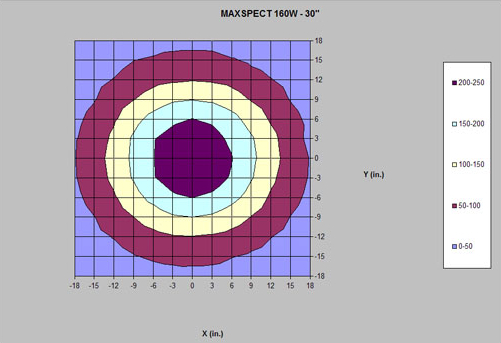 LED lighting for reef tanks is on its way to becoming a reality, and various designs and configurations are making their way into the market. This is a rapidly developing area and unfortunately rapid product changes are not uncommon. On the plus side rapid design changes are benefit to the customer in being able to provide the most current state of the art, while on the negative side making the expensive products obsolete quickly.