New LED fixtures continue to be introduced into the hobby. Specifically, there is an increase in the number of LED fixtures providing a more fuller color spectrum with multiple channels of control, allowing the user more freedom in custom tuning the light output. Continuing in the same vein as my previous LED lighting tests, this article presents data on light intensity and spread along with spectral plots for several new LED fixtures. Table 1 presents a list of the LED lighting fixtures reviewed in this article. Each of these was tested using the same set up as my previous reflector tests, using a 3’X3′ grid with a spacing of 3″ in the X,Y direction. The fixtures were centered on this grid, and PAR was measured as PPFD (Photosynthetic Photon Flux Density) in micromoles/m2/sec using a LICOR 1000 data logger and a LI-192SA underwater cosine corrected sensor calibrated for both air and water. The data logger was set to average 5 readings for each data collection point. The data was imported into Microsoft Excel for analysis and the data was plotted to display the light spread and intensity at various distances. 4 plots of the data with 2 plots at each distance were generated showing:

The spectral distributions were measured using the Licor LI-1800 spectroradiometer. The spectral data was collected from the various LEDs and normalized such that integrated light output (spectral irradiance) between the wavelengths of 400-700 nm was 100 Watts/m2. Data was collected at full power output for the individual channels of light control (eg. Blue, white) along with data with ALL LEDs on at full power. The data was normalized so that the full output was at 100 Watts/m2 over the wavelength range 400-700 nm. The various LED color outputs were then scaled by the same scale factor to allow of determination of the contribution of the various LEDs to the full output. The results are plotted as a Spectral power distribution plot.

The Mazarra P series is a modular lighting system that is sold as a complete unit with LED modules, frame mounts, power supply, and controller. The modular design allows for the addition of additional LED modules, on a support frame that is adjustable to fit a wide range of aquarium sizes. The mounting of the LED modules allows for sliding the location of the LED modules as well as allowing the LED modules to be mounted at an angle. The ability to adjust angular orientation allows for better control in directing the light output. It addition to the flexibility in mounting, this lighting fixture also allows for a plug and play replacement of the LED bulbs and the optics. 100, 70 and 40 degree optics come standard with the modules. The controller provides 4 dimmable channels, and each controller can control 16 LED modules. The LEDs used in each module are Cree XLamp XM-L, Philips Luxeon Rebel, Epileds Dual-Core, and Cree XLamp RP-G LED chips. As per the specification, each LED module is rated as 60W (4-Cree XLamp XM-L 7000-8000K @ 1500mA, 4-Philips Luxeon Rebel 460-490nm @ 1000mA, 4-Philips Luxeon Rebel 440-460nm @ 1000mA, 1-Epileds Dual-Core 400-410nm @ 1000mA, 1-Epileds Dual-Core 410-420nm @ 1000mA, and 2-Cree XLamp XP-G 3000K @ 1000mA). 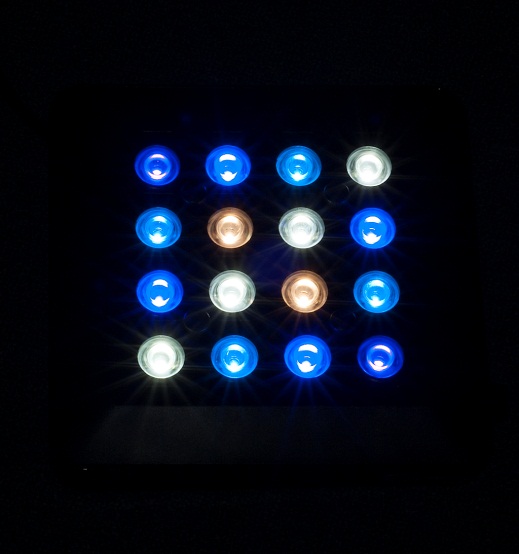 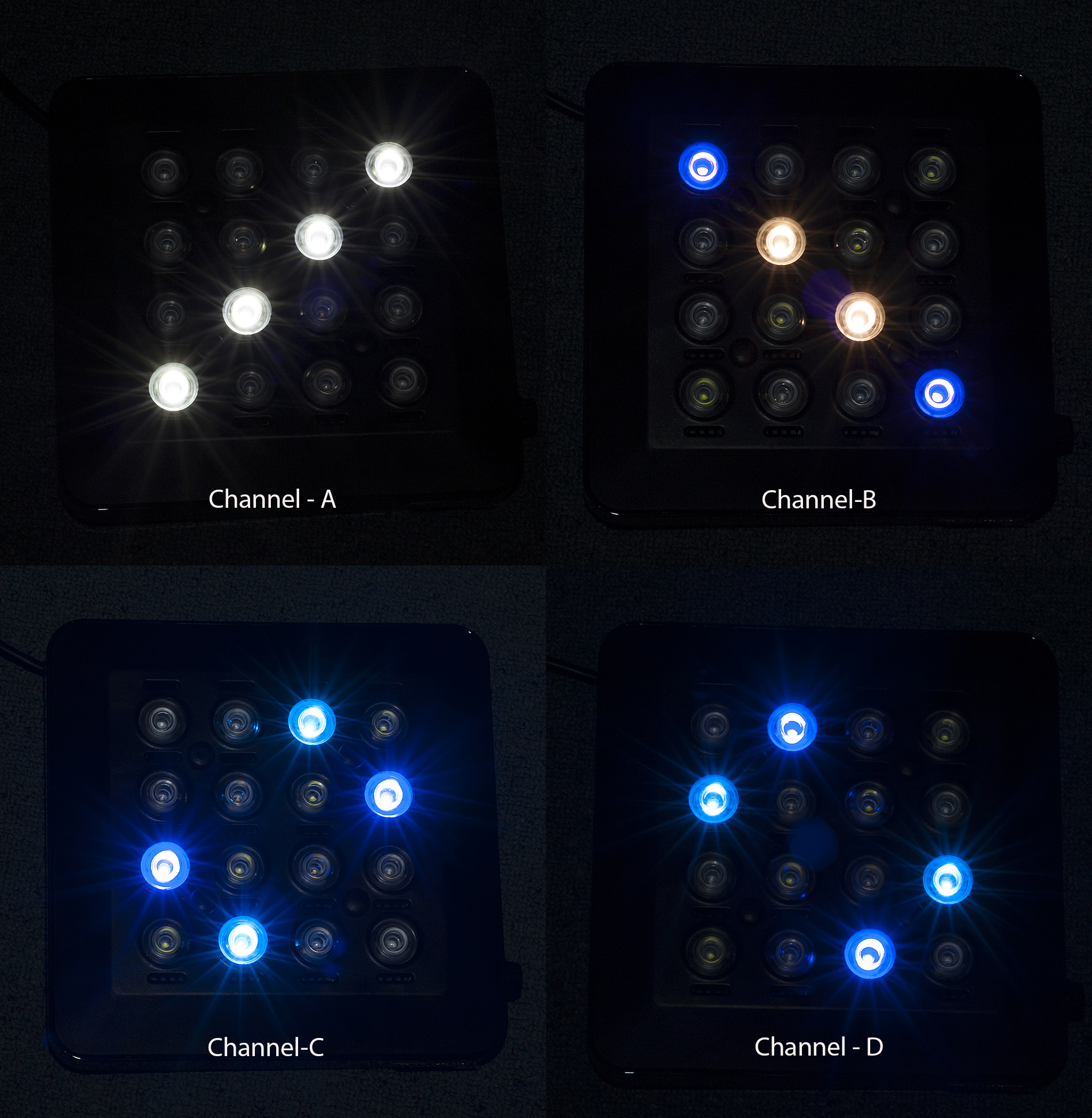 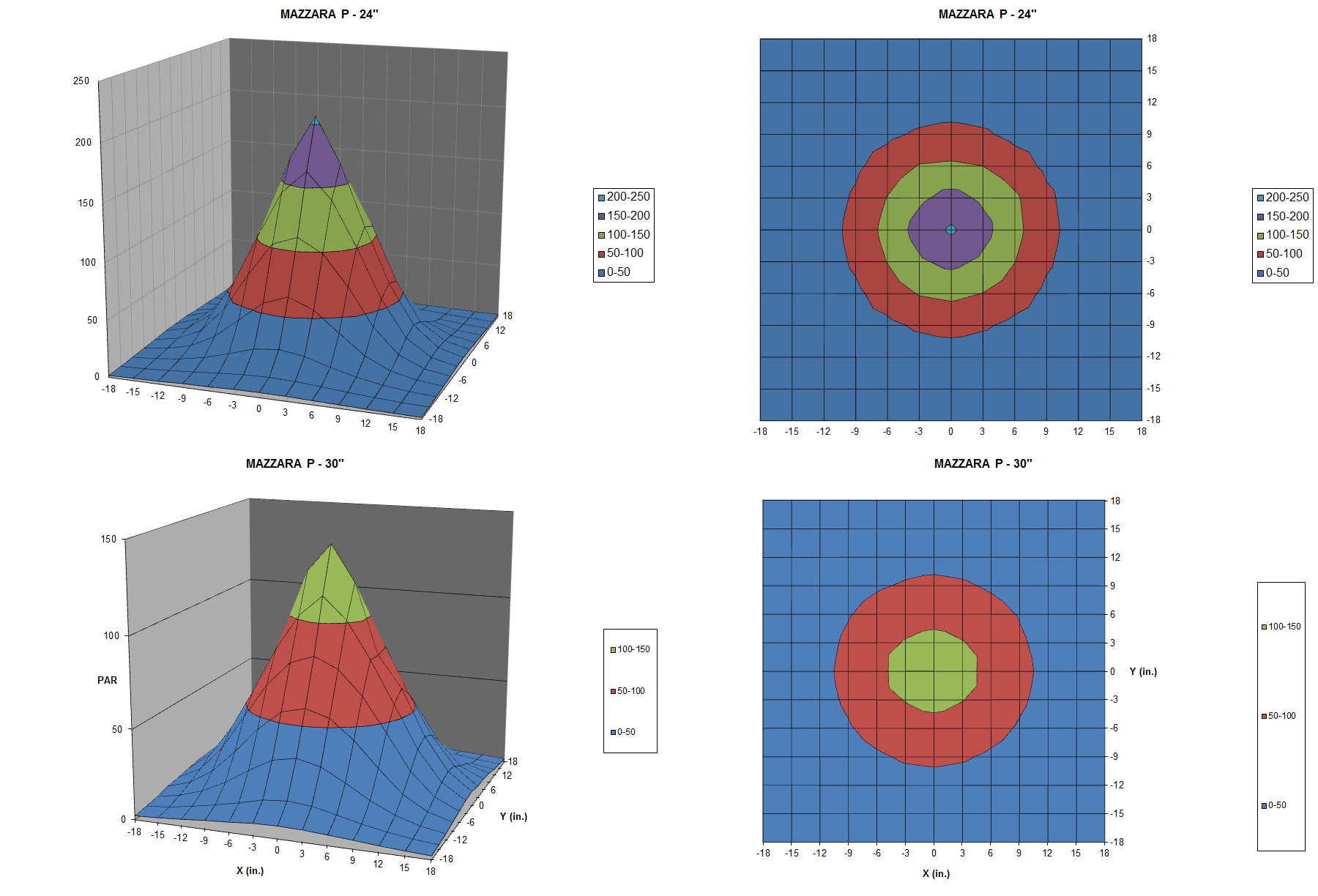 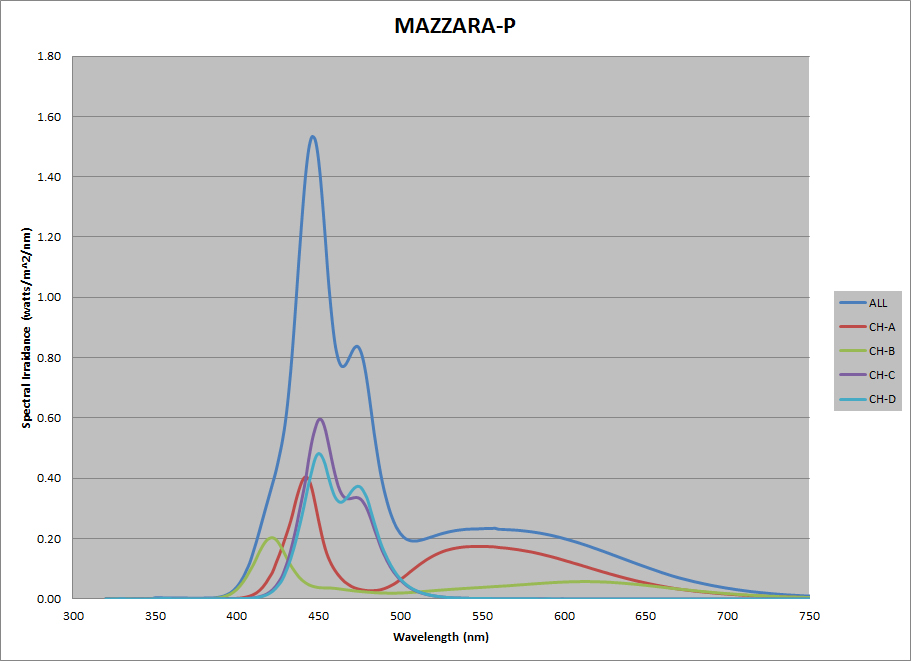 The AI-Vega is the next generation LED light fixtures from Aqua Illumination. Compared to their previous products, popular AI-Sol and Sol-Blue, the AI Vega offers additional LED colors and 6 channels of control. Each LED fixture comprises the following LEDs:

A wireless controller allows for infinite control of the 6 lighting channels to create a wide range of color combinations, along with programing in special effects such as clouds and lightning. 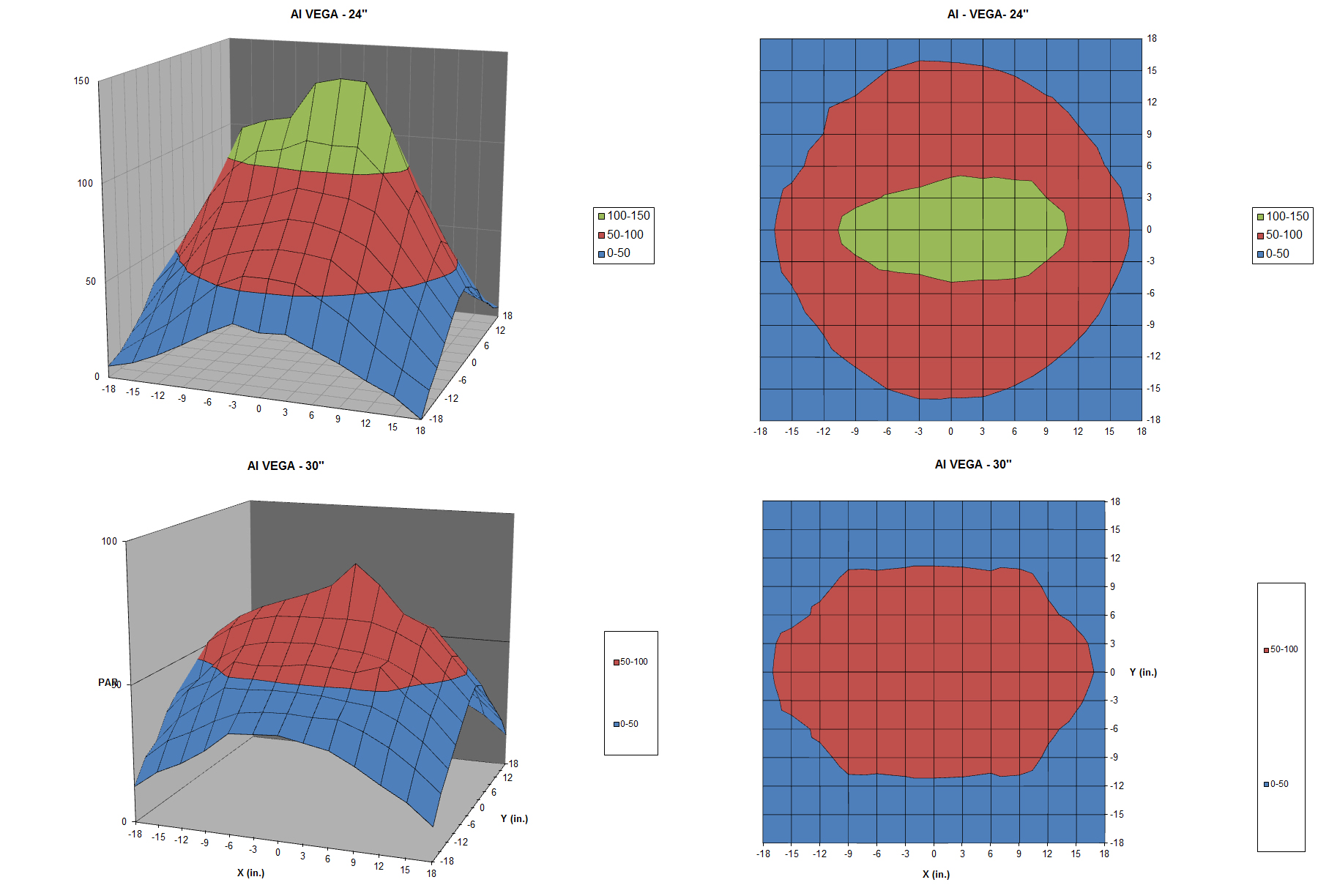 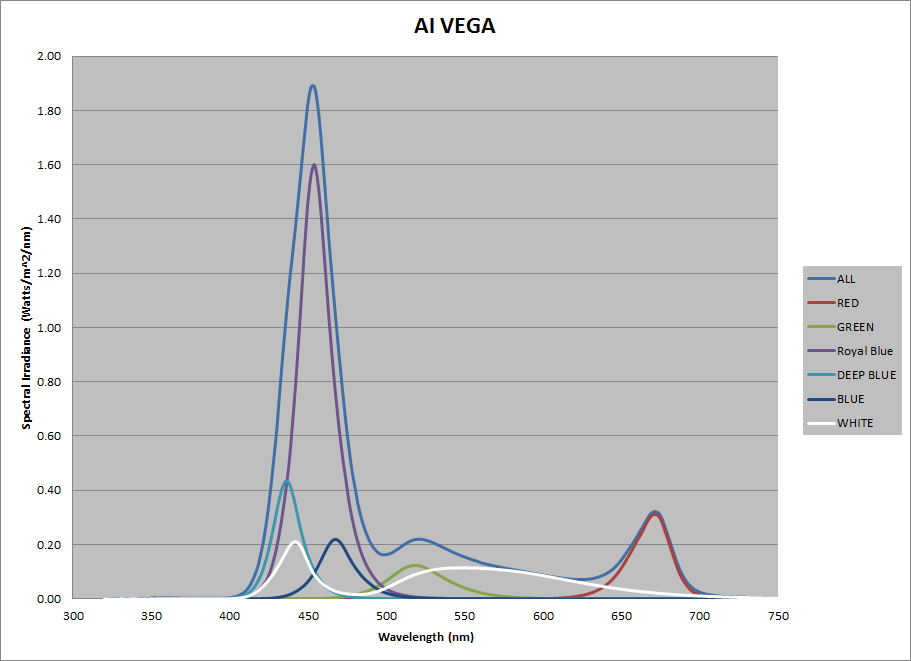 As LED lighting moves further into the mainstream, there is new effort being made to provide a fuller spectrum light that can be tuned by the aquarist to satisfy both the demands of the corals as well as the visual pleasure of the aquarist. Hopefully this data will help the aquarist make an informed choice on what to expect from the individual LED fixtures and how best to utilize them to achieve the desired coverage and light intensity.