Leopard wrasses ( Macropharyngodon spp.) would seem to be the ideal reef fish. Not only do they not bother sessile reef animals that reef keeper’s prize, but they are considered beneficial. Peter Wilkens reported that they will eat troublesome flatworms (Platyhelminthes) and the parasitic snails (Pyramidellacea) that feed on Tridacna spp. clams. Unfortunately, they are very difficult to maintain for any length of time in captivity. However, I have had some success with this beautiful and fascinating fish.

The ethical position taken by most conscientious aquarists regarding difficult to keep animals is that they never be taken from their native habitat. Certainly, it is a position that I support. A beautiful fish like Chaetodon ornatissimus, whose picture was displayed last month in our Photo Gallery is a case in point. This fish is an obligate corallivore, feeding exclusively on coral polyps. Unless the aquarist is willing and able to feed it living corals it cannot be kept in captivity. There are some fish that have been difficult to keep where things are not so clear cut – leopard wrasses for example. Experience with keeping them in captivity by advanced aquarist may teach us to maintain this fish in captivity. Therefore, I want to share some of my experience with this genus. 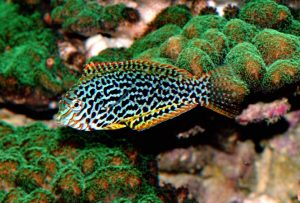 These photos of the author’s leopard wrasse were taken about two weeks ago. 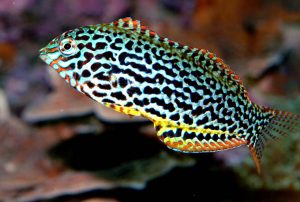 These photos of the author’s leopard wrasse were taken about two weeks ago.

As can be seen from its taxonomy Macropharyngodon is a sand wrasse; at night or when frightened it will bury itself in the substrate. As I said, the Leopard wrasse as it is commonly called is an attractive choice for a marine aquarium, especially a reef aquarium. However, do not consider one unless you can provide it with a minimum of substrate where it can bury itself. Without a substrate this wrasse may damage its mouth on the hard tank bottom and ultimately die of a secondary infection or starvation. I wouldn’t be surprised to find that some aquarist somewhere has a sand wrasse that has adapted to an aquarium without sand, but for most mem­bers of the subfamily Corinae a substrate is a necessity. Provided with a substrate the leopard wrasse is resistant to most ciliated protozoans, possi­bly because tomites (the infectious stage in the protozoan’s cycle) are most successful at locating and attaching to a host when fish are relatively motionless at night during sleep.
Buried in the sand apparently the sand wrasses are difficult for parasites to locate and or attach to.

Like most, if not all tropical wrasses Macropharyngodon is a protogynous hermaphrodite. That is, most begin life as females and males develop from females as needed. To complicate matters there are primary males (those born as males) whose coloration is more intense and whose testis are cylindrical and white with a seminal duct. Generally, there is one dominant male, usually primary, to a number of females. However, if that primary male is eliminated the highest ranking female transforms, often in a matter of hours, into a fully functional male. These are called secondary males, and though fully functional and able to maintain control over the harem, their coloration is not as intense as that of primary males and their testis “reflect their ovarian origins.” (Baensch, Marine Atlas)

A number of years ago, I began with one female Macropharyngodon meleagris and about one month later added a second female. Within several weeks the first female’s coloration significantly intensified, possibly indicating a sex change. Because I was unwilling to dissect said wrasse I can only speculate. Exactly how my secondary Macropharyngodon male (assuming the transformation took place) would resemble a primary male was unclear.

Macropharyngodon bipartitus, M. cboati, M. cyanoguttatus, M. kuiteri, M. meleagris, and_ M negrosensis_ are members of the same genus. With the exception of M. Kuiteri, these Leopard wrasses have similar den­tition. That is, with the exception already noted they have large teeth on each side of the upper jaw, plus large canines located at the front of the jaws. This arrangement permits them to success­fully feed on small, hard-shelled invertebrates. While they will not bother hard or soft corals they are particularly adept at elimi­nating the dreaded Tathrella iredalei and Pyrgiscus sp. snails that are responsible for the deaths of many Tridacna sp. Aquarists have observed Macropharyngodon spp. by Tridacna clams, around the area of the byssus, evidently in search of a predatory snail meal. Based on my observations Macropharyngodon is better equipped at keeping Tridacna spp. clams free of parasitic snails then the
sixIined wrasse ( Pseudo cheilinus bexatae­nia) that is more often kept for this purpose. Its dental arrangement allows it to pick and crush snails with relative ease. The pharyngeal teeth for crushing, the canines for picking and tearing free. The exception is M. Kuiteti, which comes from deeper water and proba­bly has different feeding habits.

Macropharyngodon sp. are ideal reef aquarium fish: they provide a valu­able service to Tridacna clam owners, do not disturb the majority of animals kept by “coralaholics,” and according to Scott Michael (confirmed by mine and other’s direct experience) are peaceful community fish, not even bothering members of their own kind. That is, they display neither interspecific nor intraspecific aggression. In fact, I introduced a Macropharyngodon meleagris female to a tank with an established female. When they met they hung vertically in the water column for a few moments, apparently checked one another out, then swam off to continue their continual search for food.

As with all animals we seek to house in our aquaria initial acclimation is the most dangerous period. Starting with a healthy specimen is the first priority. Poor cap­turing and handling are problems. Most specimens from the time that they are collected to the time that they reach a dealer’s tank have not been fed for up to 4 weeks. This is a particularly serious problem for Macropharyngodon spp. Leopard wrasses are active swimmers and require a great deal of food to keep them healthy; they easily loose weight and can reach the point of no return quickly. Therefore, do not purchase one that has a pinched belly, or especially one that is concave between the eyes. Only consider one that is actively searching every crevice of its tank for food.

Once you have chosen a healthy specimen you may have to deal with what Scott Michael calls “piscine jet lag.” In your tank it may begin its day foraging for food in the middle of your night. My second Macropbaryngodon meleagris reburied itself at 6 AM.; consequently, I got up at 5 AM and fed it mysis shrimp. In my experience, most leopard wrasses will bury themselves for at least a few days when first introduced. This can be a problem, as this active fish can lose weight easily.

Fortunately for me it soon adjusted its inner clock and was up during my daylight hours. It took me several months to bring this wrasse up to normal weight. Like most wrasses it is laterally compressed; mine began about 6 inches in length, about 1 inch from dorsal to belly, and only 0.5-cm in width. It is now better than 1cm in width. I am of the opinion that it is diffi­cult to bring a starving fish to nutritional health with only live or frozen foods. With a fish like Macropharyngodon meleagris, a reef tank, or at least a live rock tank, will allow it to begin a search for micro invertebrates, hopefully with some success. Within a day or two it will readily take Mysis, blood worms, and other such foods. However, I have seen far too many fish starve in the long or short run on just such a diet. It is important to get Macropharyngodon meleagris to accept a good quality flake food. Frozen and live foods are mostly water, flake foods mostly food. Unless you
can supply it with a constant source of micro invertebrates it is important to teach it to eat flake food. Teach a fish to eat? It will learn to eat from example and the stimulus of a community feeding frenzy. Healthy fish live to eat, and a newcomer, unless it is a very specialized feeder, will soon join the party. Generally, it is only when fish begin to eat dry food that they retain their coloration and reach nutritional health. You may wonder if it’s possible to feed flake food daily or even twice daily without producing an undesirable nutrient rich condition in a reef tank. Powerful protein skimmers and natural nitrate reduction in the living sand appear to make this possible. I was able to keep that pair of leopard wrasses for about 4-years, before they mysteriously disappeared.

Recently, pictured here, I added a new Macropharyngodon meleagris to my 10–foot reef tank. It buried itself for three days before emerging. It is feeding very well now on flake food and frozen plankton, and perhaps more importantly has a large, established reef tank to hunt for small micro invertebrates. Evidently, it is getting enough to eat – it has gotten fatter and has grown. I’m of the opinion that the difficulty most aquarists have with leopard wrasses is starvation. It is an extremely active fish, and it requires a constant supply of food; that is, a large reef tank to hunt in. Also, the availability of frozen plankton increases the aquarist’s chances of keeping leopard wrasses nutritionally healthy.

I want to emphasize that leopard wrasses are very active fish and have an unusually high food budget. They must be fed a lot, and require a large established reef tank, where they can continually successfully hunt for small crustaceans. If the small crustaceans in your reef tank have already been eliminated by other fish you will probably not be successful introducing one of these fish.