The Marine Ornamentals Conference 2004 (MOC 2004), with its themes of Collection, Culture and Conservation was held in Honolulu from March 1 to March 4. It was held jointly with the much larger meeting of the World Aquaculture Society (WAS). Registration was shared so that it was possible for registrants to attend sessions of either meeting, and there were also a number of speakers who participated in both conferences. This made for an Ornamentals Conference that focused more on the economics and technical aspects of the trade than on the particular concerns of “end-user” hobbyist, in what came to be called the “chain of custody” that marine ornamental organisms go through from the time of their capture. The attendees were predominantly made up of collectors and aquaculturists, wholesalers and other middlemen, and retailers, giving the conference a “reef to retail” perspective. The attendance of hobbyists with no involvement in the trade other than
acquiring and maintaining organisms in their aquaria was minimal. This made for discussions and presentations that were often quite different from those at the Marine Aquarium Conference of North America meetings that I attend annually, and very interesting in their difference. 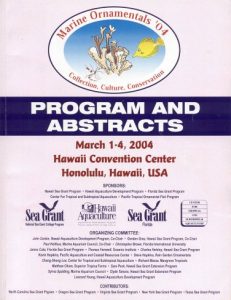 The conference opened on Monday with panel titled “Identifying Needs for a Sustainable Marine Aquarium Trade,” followed by a lively discussion. The panel reviewed the almost 20 years of effort of the Marine Aquarium Council (MAC) and others to eliminate the use of cyanide and other destructive collection techniques. The publicity over these deadly techniques may have stopped, but the practice remains.

Reports from workers in Indonesia and the Philippines indicated that net capture has been successfully introduced in a number of coastal communities where the collection of marine ornamentals presents an important alternative to poverty. Unfortunately the program has not been completely successful. In areas where prices per fish remain low and where local wholesalers – as well as U.S. importers (the vast majority of these fishes are destined for the U.S. market) and hobbyists – are reluctant to pay some level of premium for guaranteed net-caught fish, local fishers have reverted to collection by cyanide. If hobbyists want to be sure that their new acquisitions are not doomed because they were collected with cyanide they must be willing to pay a little more for net-caught fish so that the collector communities can earn subsistence levels of income.

Further reports on fish mortality in the “chain of custody” from collector to importer to retailer and hobbyist were even more chilling. Peter Rubec of the International Marinelife Alliance Fish mortality estimated mortality to be 50% in the process of removing fish from the reef to on-shore holding facilities of uncertain quality, then at 30% at each additional step in the chain, culminating in what may be an over 90% mortality before retail purchase. Experimental evidence indicated that the combination of the collection-induced stress of capture associated with removal from shelter, bagging, crowding etc. and from starvation for 3 days of “purging,” in addition to high ammonia levels in the holding bags, produced more than 66% mortality within 13 days from capture. An additional indication that stress from these procedures is lethal is that reports from retailers of deaths on arrival or within 4 days after arrival is 30% on the west coast, 40% in the mid west and 60% on the east
coast, as the fish are moved from west to east in space and time.

My informal discussions with a number of wholesalers and retailers at the conference more or less substantiated these figures. Whatever the exact average mortality figures may be, even if they turn out to be somewhat lower, they are clearly unacceptable. MAC’s solution is to work to establish “standards and procedures” for each link in the chain to reduce mortality and to use a certification process to encourage participation. Ultimately choices will have to be made by hobbyists to support these efforts by insisting on livestock captured and moved by acceptable standards and by willingness to pay premiums for fishes more likely to survive in their care.

Tuesday’s opening plenary focused on the three main conference themes; collection, culture and conservation and on the difficulty of “melding them into a single vision.”

Discussion of collection issues followed a presentation of From Ocean to Aquarium: The global trade in marine ornamental species, prepared by The World Conservation Monitoring Center of the United Nations Environmental Program, and reviewed here in theNovember 2003 issue. It is accessible at http://www.unep-wcmc.org/resources/publications/WCMC_Aquarium.pdf

The report’s section on collection indicates that collection techniques have resulted in unacceptable captive mortality and degradation of reef environments. As referred to earlier, goals for the future suggested by MAC are the ambitious project to first define and establish “best practices” for fisheries management, collection, handling, transport and husbandry and then to establish certification procedures for facilities that comply along with a labeling program to identify certified organisms. Of course such a program is based on the assumption that practices which increase survivability can be specified. Many in attendance would be happy to see substantial resources made available for serious efforts to identify the variables that are involved in survivability. 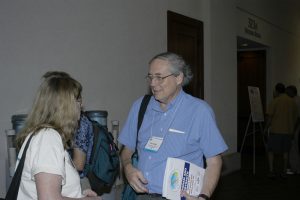 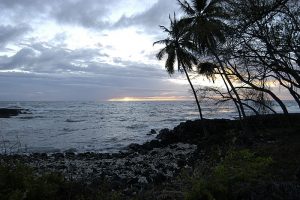 A beautiful sunset in Hawaii – a perfect location for the Marine Ornamentals 2004 conference. 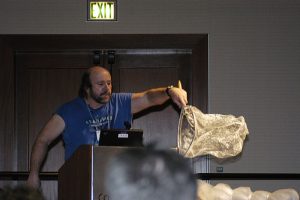 Steve Robinson during his presentation – demonstrating the various nets and netting material. 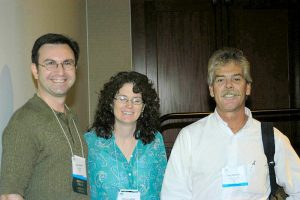 Sherry Larkin and Craig Watson with John Brandt of MASNA posing for a photo after their session.

The impact of collection on populations of “targeted” organisms has also brought with it substantial negative publicity about the industry, and a response from regulatory agencies. William Walsh of the Hawai’i Division of Aquatic Resources demonstrated the effects of local overfishing and discussed the effectiveness of the creation of Fish Replenishment Areas and Sea Grant’s Sara Peck presented the community-based West Hawaii Fisheries Council as a model for local involvement in fisheries management decision-making.

The second and related conference priority, the culture of ornamental organisms, which led to this first joint meeting with the WAS, points to increasing emphasis on aquaculture in our field. Actually, increased emphasis on aquaculture and mariculture comes close to fulfilling the goal of “melding” collection, culture and conservation “into a single vision.” It serves as one of the most important and fundamental ways to overcome some of the issues of mortality associated with collecting from the wild, while producing specimens with greater ability to adapt to handling and to home aquarium conditions. At the same time it makes important strides toward the conference’s third priority, conserving reefs and wild populations.

In line with this concern, the theme of Wednesday’s plenary was the status of marine ornamental aquaculture. The opening statement by David Vaughan discussed the critical interplay of biological research funding with commercial ventures and encouraged the industry to sharpen its grant writing skills to obtain funds to enhance culture techniques and solve disease and nutrition problems.

The movement of science and technology into the realm of aquaculture of ornamentals was demonstrated by the almost eerie science-fictional next talk, “The Potential of Biotechnology in the Marine Ornamental Fish Industry,” by Singapore biologist T.J.Lam. He reviewed recent advances in the production of novel varieties, especially the work of laboratory in creating the genetically modified fluorescent zebrafish and recent findings on the genetic control of gender, which enables specified production of males or females. He also presented material on a strain of genetically modified yeast which includes genetic material from tilapia and which is therefore nutritionally superior to ordinary yeast for the feeding of rotifers and Artemia nauplii. He discussed the availability of advanced diagnostic tools for diseases and for the use of advanced bioengineered controls and immunization procedures for viral diseases. This brings about a brave new fishy world of unexpected
consequences, with organisms genetically patented by large firms driving small aquaculturists from the market?

Not only fish are being aquacultured. The conference provided information about the culture of a number of ornamental crustaceans. Many Lysmata shrimp species are coming into production, in spite of problems associated with long larval periods, complex molting series and lack of knowledge of natural feeding patterns_. L. seticaudata_, the Monaco shrimp, is a superior controller of Aiptasia, often consuming 70% of the anemones within 48 hours, which they completely consume, leaving no remnant to regenerate.

Mithraculus sculptus, both the “emerald” and the “ruby” crabs that aid in the control of the sometimes troublesome bubble algae, have also been successfully spawned and raised.

More and improved food organisms for aquaculture have also been developed. Cultures of marine copepods, especially the paracalanid copepods that have been found useful in the rearing of Centropyge species are becoming available and techniques for more efficient rearing and enrichment of rotifers have been developed. Nematodes are also being studied as foods for early stage larvae.

Wednesday’s program also offered presentations on attempts to further systematize the categorization and diagnosis of diseases of corals in order to work toward more disease-specific and effective treatment techniques. The day concluded with presentations by experts in the “biosecurity” of aquaculture facilities. This was the buzzword for much of the WAS’s concern. It refers to the attempt to prevent the introduction of disease, its spreading and proliferation within a facility and its release from the facility. This was an area where the availability of specialists from the World Aquaculture Society made it possible to share information with the Ornamentals Conference

Thursday’s meeting was devoted to the role of the hobbyist. Much attention was given to the question of hobbyist involvement in the release of organisms that are exotic to the region of release, and have the potential to become invasive – that is, to establish reproducing populations that have the potential to negatively impact the ecosystem, local species or human health and welfare. Reports, both accurate and inaccurate, of releases by hobbyists have added further fuel for those who would regulate us to death.

Until recently the focus on hobbyist involvement in the spread of invasive species has been directed at the release of aquatic plants. Among marine organisms, Caulerpa taxifollia has been the most discussed. The discussion now includes fishes, thanks primarily to the documented discovery of apparently breeding populations of the Indo-Pacific lionfish, Pterios volitans, as far north as North Carolina, and even to the waters of New York’s Long Island. Many informal reports of tropical Pacific fishes in the waters around Florida exist but no formal studies have been undertaken. Hobbyists, even if some of these releases came from other sources, must understand that any organism they invite into their tanks must never be released to the environment.

There were many other important findings presented in this conference. These ranged from the Sexual Coral Reproduction (SECORE) project’s discussions of the use of sexual reproduction rather than fragmentation for coral culture as part of the panel led by the Waikiki Aquarium’s Charles Delbeek to many studies of feeding early larval stages of marine ornamentals. The conference was a great success, providing those in the “chain of custody” from reef to retail with much valuable information for increasing the survivability of wild-caught organisms and for the aquaculture of an increasing number of species. Try to get to the Marine Ornamentals Conference 2006. You’ll learn about the realities that underpin your beautiful tank.

As a final note, at this stage in the history of marine aquarium keeping it is imperative that hobbyists demand healthy organisms that have a chance to live for a substantial period in their tanks and to put their money where their mouths are by being willing to pay a premium for such specimens. We must support our best providers – the conscientious collectors and risk-taking mariculturists. To do this aquarists must be informed. James Wiseman of www.reefs.org gave an important talk on the use of the internet as an information provider as part of a panel on the “Role of Media” with Timothy Hovanek and myself. Make sure you keep up by using the internet, publications like SeaScope, and by the authors of worthwhile books.