It’s been a bit of a wait, but it’s surely worth it. I reviewed Scott Michael’s first volume of his Reef Fishes Series in April of 1999. In that volume’s 624 pages, illustrated with over 1,000 color photographs, the well known and highly respected expert aquarist, writer and underwater photographer set a new standard for marine fish identification guides of special value for aquarists. The combination of Michael’s knowledgeable text and awesome photography with publisher Microcosm’s high production standards made it a “must have” for the aquarist’s library. This second volume more than fulfills our expectations about the rest of the series. 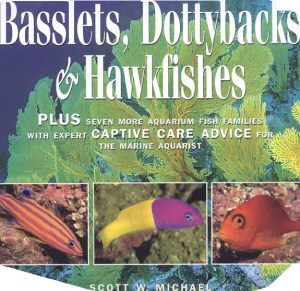 In that first volume Michael included important general information. He opened with an introductory section on coral reef ecosystems, reef fish diversity and adaptive strategies, including predator-prey relations, mating, and social behavior. His first chapter, on the history and anatomy of reef fishes, examined the fossil record and discussed the specialized anatomical features of fishes. The next chapter, on taxonomy, covered all known reef fish families, including a “broad brush” survey on general captive care for each family. The third chapter, on coral reef habitats, discussed the natural habitats of coral reef fishes – reef types and zones and specific habitats such as lagoons, reef flats, crests and caves – and groups the reef fish according to these, along with hints for selectively recreating this diversity in habitat-specific aquaria. This information is not included in the rest of the series. If you don’t have this book in your library, you should put it on your shopping
list right away.

The new volume, like the previous one, is based on the author’s years of experience observing the majority of these species in the wild and/or or keeping them in captive aquarium systems. Based on this experience he provides detailed advice not only on their identification, but also on feeding, social behavior and compatibility as well as important information on captive care for each family in general and each species in particular. Like the previous book, it too is filled with excellent and beautiful identification photographs.

Volume 2 opens with “The Fishes,” which gives the general plan of the volume. As in the first volume, for each species covered the author gives the scientific name and one or more common names. In an attempt to clarify some of the confusion around common and trade names, Michael uses the informal name most frequently used by ichthyologists as well that used by most hobbyists. He follows with the maximum length the species attains, its range and its biology, including habitat, depth, food and feeding patterns, reproduction and social organization and special relations with other species. Captive care and husbandry information, along with suitability for the invertebrate aquarium and any captive breeding information available are presented next, followed by minimum suitable aquarium size and the temperature range required by the species. His Aquarium Suitability Index, with scores from 1, indicating those species which are “almost impossible to keep,” to 5, for those species which
are “very hardy with almost all individuals readily acclimating to aquarium confines” is of critical importance for those contemplating adding specimens to their aquaria. Scott Michael’s extensive personal experience and familiarity with the relevant scientific literature make these volumes the most important comprehensive works available on marine fishes of interest to aquarists.

The first group covered is the highly varied Groupers (Family Serranidae), described generally as “incredibly hardy, disease-resistant fishes that can live for many years in the home aquarium.” Many are available as juveniles but Scott warns, “Do not be fooled into thinking you can keep a juvenile of one of the larger grouper species in a small tank for an extended period of time. Most groupers grow very quickly.” Material concerning the related soapfishes follows, of which “few are highly regarded by aquarists because of their subdued color patterns and secretive tendencies.”

The Reef Basslets, (genus Liopropoma) a group with a number of important aquarium species, are next. “As reef aquariums have gained popularity… demand has increased for brightly colored fishes that will not harm sessile invertebrates….One group of …’reef safe’ species is the… reef basslets.” These fishes, including the beautiful Swissguard and Candy Basslets are especially suited to minireef systems.

A section on the small, hardy and highly colored Dottybacks (Family Pseudochromidae) follows. Although these fishes are excellent subjects for the minireef, “One of the biggest dottyback husbandry challenges is to control the malevolent temperament of some species… the larger dottybacks can inflict lethal damage.” Research the species carefully with respect to tankmates.

The mostly solitary and cryptic Longfins, (Family Plesiopidae), including the lovely Assessors and the Marine Bettas or Comets are next. They are followed by the Jawfishes (Family Opistognathidae). “As far as marine aquarists are concerned, all of the jawfishes are fascinating and unusual aquarium inhabitants…and all are relatively hardy.” This assumes that their environments include “the right kind and right amount of substrate” for them to build their burrows.

The next group, the Bigeyes (Family Priacanthidae) are less familiar in the aquarium trade. They usually require large, dimly lit, aquariums. The more common Hawkfishes, (Family Cirrhitidae), “fascinating to watch, extremely hardy, often quite colorful” are then discussed. Their downside as aquarium members is “a predisposition to be aggressive, a taste for smaller fishes and ornamental shrimps, and a tendency to lose their vivid coloration.” Description of the Morwongs (family Cheilodactylidae), rarely seen in the aquarium trade, follows.

The Cardinalfishes (Family Apogonidae), “attractively colored, hardy and well- behaved in both fish tanks and minireefs” is an interesting group that was “underappreciated” until the popularity of the Banggai Cardinalfish, which readily spawns in captivity are covered next, followed by the last group in this volume, the Tilefishes (Family Malacanthidae). These must be maintained in pairs or trios with adequate open water swimming room if they are to successfully adapt to aquarium conditions.

It is my understanding that Volume 3, primarily devoted to the Angelfishes and Butterfly Fishes, is ready for publication. I look forward to seeing it in print. Volume 4 will focus on Wrasses, Damselfishes and Blennies as well as Dragonettes and Parrotfishes. Volume 5 will cover the Triggerfishes and Surgeonfishes, plus Gobies, Rabbitfishes and Moorish Idols. A final Atlas will present a comprehensive photographic index to the five volumes and cover aquarium Sharks and Rays. The original announcement for the series suggested that there would be four volumes plus the Atlas. Apparently more was required.

In summary, this series is invaluable for all those who, like Scott Michael and many of us, believe that “A coral reef or a marine aquarium without fishes has been likened to a garden without birds or butterflies.” Add these books to your library as they come out. They will be important sources of information for as long as you remain a fish keeper.