Underwater photographer/journalists Denise and Larry Tackett have put their extensive diving experience in the beautiful and diverse reefs and lagoons of Indonesia, Beau, New Guinea, the Maldives and Seychelles for more than 10 years, to create a book that fills a vacuum in the literature of importance to marine aquarists. We have a number of fine works on the creation and maintenance of closed reef systems and associated organisms and there are very informative, highly technical academic volumes on marine biology, but there is little in the way of an accessible intermediate-level treatment of the biology of reef organism presented in a visually appealing way. This volume is an important step toward filling that gap. 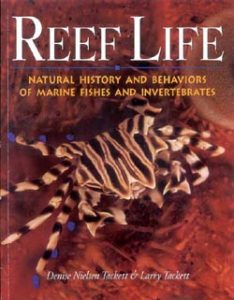 Reef Life opens with a forward by Ron Shimek, “Looking Closer,” in which he states “If the authors succeed in simplifying marine biology concepts and basic terminology for more divers and aquarists, they will have done a yeoman’s service to all of us who care about the future of these threatened environments…. Full of beautiful and uncommon organisms and important-to- know-behaviors, Reef Life is an obvious labor of love and a highly commendable primer on reef life.” The authors have succeeded in this undertaking. An example of the way in which they proceed to present not only striking underwater photos, but detailed information as well, the beautiful page-and-a-half photograph of fishes under a tabletop Acropora on pages 10 and 11 is reproduced in miniature on page 12, this time with each organism numbered and referenced with their common and scientific names. This useful technique of “looking closer” to dissect a complex photograph is used throughout the book to excellent effect, and adds greatly to its educational value.

The forward is followed by a prologue on “Reef Exploration” in which the authors chronicle their diving experiences, from their initial work collecting sponges for research on anti-viral and anti-cancer agents derived from those organisms’ defensive chemical arsenal, to the photojournalism that currently occupies them. Underwater photographers will appreciate the details on equipment and technique the authors provide in this section.

Chapter 1 presents the basics of “Reef Origins.” The geography of reef distribution, the oceanographic parameters required for reef formation, reef types, reef zonation, and the ecological niches or realms of reefs, are covered, along with discussions of species diversity, competition and the role of reef building scleractinians. As is the general strategy throughout the book’s chapters, each section is heavily illustrated, with many of the large- scale photos also duplicated in labeled and notated form, and with good diagrams and drawings used where appropriate.

Chapter 2, “Reef Dwellers,” concentrates on the reef’s biomes and the great diversity of reef organisms, from plankton through mammalia. In the chapter’s “Webs of biodiversity” section, the authors review the taxonomy of coral reef life and provide 20 pages of outstanding photographic images of many genera exemplifying major taxonomic divisions, with accompanying descriptive text. Chapter 3 discusses “Near-Reef Habitats” and the associated organisms of the sandy bottoms, mangroves, sea grass beds and lagoons and estuaries, as well as the pelagic community.

Chapter 4, “Living Together,” discusses the fascinating subjects of symbiosis and other “coordinated reef survival strategies” such as mutualism and commensalism, as well as parasitism. It also includes discussions of social behaviors like shoaling and chemical cues to “settling out.” Chapter 5 focuses on “Feeding Time.” The authors present the biological concept of “feeding guild” to analyze types of food resources utilized and describe the subsets of animals and styles within the primary guilds. Predation adaptations and techniques and their relationship to food sources, and nutrient cycling are covered, with the discussions aided by illustrative photos.

Chapter 5, on “Protection and Defense,” and chapter 6 titled “Masquerade,” which covers mimicry and camouflage are next, each with outstanding photographic examples. Although the concepts may be familiar, the extraordinary illustrations, especially the 22 pages of pictures of examples of mimicry are a tour de force. The final chapter in the main section of the book, Chapter 7, “Reproduction,” deals with the procreative behaviors and strategies of reef and near-reef dwellers.

The text of Reef Life concludes with “Disappearing Reefs,” concentrating on destructive anthropogenic impacts on reefs. I know that the great majority of marine aquarists are aware of the devastation that is caused to reef environments by human activities (for example, see the discussion below of “white pox disease”) and the probably irreversible loss of a large and increasing proportion of world coral reefs, but it is important that we not bury our heads in aragonite but instead join the organizations and groups such as Reef Relief (also mentioned below) who are struggling to halt the damage and where possible, reverse it. Read this chapter although it hurts.

I recommend this book, especially to those who have avoided (or been intimidated by) the technical research and theoretical literature on marine biology. The quality of the publishing is up to the high standards we have come to expect from Microcosm – the many excellent color photographs, virtually at least one and usually more on every page, are reproduced well and the text is well organized and accessible. The concepts are presented in highly readable form and the illustrations make the text come alive. Even for those who are already familiar with the content, the illustrations are easily worth the modest price of the book.

In “The etiology of white pox, a lethal disease of the Caribbean elkhorn coral, Acropora palmata” (Patterson K. L. et. al.,_ Proceedings of the National Academy of Sciences. USA,_ Vol. 99, Issue 13, 8725-8730, June 25, 2002), a group of marine biologists from, among others, the Universities of Georgia and South Carolina, Clemson University, the Scripps Institute, and the U.S. Environmental Protection Agency have identified a common human fecal enterobacterium, Serratia marcescens, as the causal agent of white pox coral disease, the first time that a bacterial species of the human gut has been shown to be a marine invertebrate pathogen. Populations of A. palmata are being decimated by white pox disease, with losses of living cover in the Florida Keys typically in excess of 70% and approaching 85% in some areas. The rate of tissue loss is rapid, averaging from 2 to 10 square centimeters per day, and is greatest during periods of seasonally elevated temperature.

The study indicated the spread of white pox fits the contagion model, with nearest neighbors most susceptible to infection. The researchers, expecting to find a marine pathogen, identified 221 bacterial strains from samples of healthy coral and colonies afflicted with white pox, four of which appeared more frequently on diseased coral – but only Serratia marcescens, was capable of causing the disease in healthy coral samples. Elevated water temperatures increase the rate of white pox-induced coral loss. “Warmer water depresses coral growth but increases bacterial growth. In combination, this domino effect could foretell disaster. There appear to be environmental changes occurring that may be making this nonpathogenic bacterium pathogenic.”

The new evidence suggests that sewage treatment should be improved. “Thousands of illegal cesspits still exist in this county,” says DeeVon Quirolo, executive director of Reef Relief, a conservation group based in Key West, Florida. “The problem has been denial as to whether there is a problem.” Sewage regulations introduced in the Florida Keys National Marine Sanctuary last year have already resulted in new coral growth on the reef, says Quirolo: “We’re on the road to recovery”.

Scientific American, June 14, 2002, discusses the mechanism by which Caribbean reefs maintain biodiversity although the more than 100 species of coral spawn more or less simultaneously, “forming a thin pink slick of intermingled eggs and sperm.” What appeared to be three distinct Acropora species turned out to be two species, with the third a hybrid of the other two. The hybrid is for the most part sterile but can, however, reproduce by cloning, generating what researchers call “immortal mules” – animals that can survive for a very long time but not breed sexually.

The hybrids come in two different physical forms, “bushy” and “palmate,” the morphology dependent on the species the egg comes from, with maternal mitochondrial DNA and egg cytoplasm determining the form. The authors speculate that in this manner cross-species offspring do not detract from the local biodiversity, but rather enhance the morphological and ecological variation of the reef. The team suggests that the same effects may also occur on the “hyperdiverse” indo-pacific coral reefs.

Jon Copley, in “Coral reefs operate free-market economy,” ( New Scientist, April 28, 02) reports on the findings of R. Bshary of the University of Cambridge and D. Schaffer of the Max Planck Institute for Behavioural Physiology, Germany. The authors claim to have seen competition at work in the interactions between cleaner wrasse stations and their client fish on the reefs of Ras Muhammad, on the Red Sea coast of Egypt.

Fish were less likely to revisit stations where they had previously been “cheated” when cleaners removed mucous or they had to wait in line for cleaning. “I would not be surprised if clients eventually avoid a station completely if they are cheated repeatedly,” according to Bshary.

The researchers conclude that by exercising what amounts to “consumer choice”, the client fish promote healthy competition between the available cleaning stations, and this ensures good quality service.