Soft Corals and Sea Fans: A comprehensive guide to the tropical shallow-water genera of the Central-West Pacific, the Indian Ocean and the Red Sea

By Katharina Fabricius and Philip Alderslade 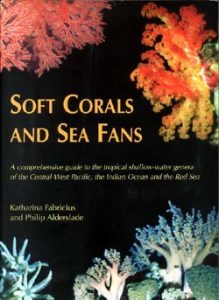 The volume contains 264 pages, illustrated with hundreds of excellent color underwater identification photographs. It also contains as well clear accompanying line drawings of sclerites, critical for final taxonomic determination. There is a bibliography and an index.

Marine biologist Katharina Fabricius, Research Scientist at the Australian Institute of Marine Science and octocoral taxonomist Philip Alderslade, Curator of Coelenterates at the Museum and Art Gallery of the Northern Territory at Darwin, Australia, collaborated to author this handsome identification guide to over 90 genera of the order Alcyonacae, belonging to 23 families. This order, along with the orders Helioporacea (blue coral) and Pennatulacae (sea pens) — groups this volume does not cover — form the Subclass Octocoralia, which is characterized by polyps bearing eight (as the name implies) hollow tentacles, with both sides fringed by one or more rows of pinnules. This differentiates them from the six tentacle based Hexacoralia, which includes the sea anemones, hard corals, zoanthids and corallimorphs. The state of taxonomy of the Alcyonacea, like that of other cnidarians, is currently under revision. The goal of the book’s authors is to provide “a tool which for the first time, should give non-experts a comprehensive review of these 90 genera, and the means to correctly identify them underwater and in the laboratory.” We would add, ‘and in the aquarium.’

Many aquarists are interested in maintaining organisms from this group, among them some that are often considered the most beautiful inhabitants of coral reefs, in spite of the fact that some of the most attractive and colorful species are azooxanthellate and therefore require difficult, special feeding regimens. Charles Delbeek’s report on Dendronephthya at the Waikiki Aquarium, “Non-photosynthetic Corals” in the January 2002 premier issue of Advanced Aquarist and Rob Toonen’s “Discussion of the care of gorgonians” in the March 2002 issue are indications of this interest. These authors detail both the advances made in the husbandry of the group and the remaining critical limitations in our knowledge.

This well illustrated field and laboratory guide significantly adds to the project of solving the problems associated with improving specimen viability by providing the information necessary for reliable identification of 90 genera known from the Central and Western Pacific, the Indian Ocean and the Red Sea, along with some information on their natural habitats.

The volume begins with forty valuable pages of basic material about the biology and ecology of reef-inhabiting soft corals and sea fans, and explains the few technical terms used. The section starts with a general overview of the classification of the phylum Coelenterata down to the order Alcyonaria. This is followed by discussions of octocoral histology and anatomy and of their growth forms. Aquarists will appreciate the information in the sections following on reproduction, propagation, and on nutrition — including feeding and photosynthesis. The second half of this section discusses the ecology of octocorals, including important notes on their physical environment, such as currents, light, salinity, temperature and nutrients. This is followed by a fascinating discussion of “chemical ecology,” covering protection and defense, anti-fouling and anti-predator substances, interactions with other species ranging from symbiosis to allelopathy (chemical defense against space competitors), internal sunscreens and complementary metabolites used in reproduction. This opening section concludes with “Choice of Octocorals for a Coral Reef Aquarium,” in which the authors recommend choosing zooxanthellate species and seek to discourage the collection or acquisition of those that lack symbiotic algae, excellent general advice for the time being, given our present state of knowledge.

The remaining 200 pages of the guide are devoted to identification and associated information. The authors caution that classification into suborders “is difficult to justify,” and therefore allocate families and genera into “groups.” A summary survey of families, with page-referenced photos of typical genera provides handy organization for the remainder of the volume. The guide proper is profusely illustrated with excellent underwater photographs and detailed line drawings of skeletal elements for each genus, along with descriptions of colony shape, polyp structure, color, habitat and abundance, and geographic distribution. Most important, the presence or absence of zooxanthellae is noted for most genera. The photographs – averaging 6 to 8 per genus – cover the major growth forms, including pictures of entire animals in their natural environment as well as close-up photographs of characteristic details. The book is worth having for the beautiful illustrations of these gorgeous organisms alone.

This volume is worth space on your bookshelf for its value as an excellent, informative, beautiful, identification guide. It does not, however, provide the detailed information needed to increase the potential for survival of the azooxanthellate genera in aquariums. The current state of knowledge about the husbandry of these organisms is limited, as is their life span in captivity. For advances in that direction, articles such as those by Charles Delbeek on Dendronephthya and Rob Toonen on nonphotosynthetic gorgonians in this publication are much more likely to provide critical husbandry information

The February 2002 National Geographic features “Cuba’s Reefs,” by Peter Benchley, with magnificent photographs by David Doubilet (p. 50). Benchley reports that Cuba’s reefs are almost pristine, compared with other Caribbean reef areas. He says, “I…apparently slipped backward nearly half a century into an underwater realm that had not existed, so far as I knew, since the 1950’s.” Cuba, with the largest submerged shelf in the Caribbean, has more than 3,000 miles of coastline containing four reef systems, each equal to or larger than the Florida Keys. The “Garden of the Queen” Marine Sanctuary, containing about a thousand square miles of reefs off Cuba’s southeast coast, is strictly protected. As in many other world areas, however, there is conflict between the value of commercial fishing areas and the need for environmental protection to meet the demands of the thriving tourism industry. Currently the balance is in favor of ecotourism. The dive operation was very professional – several crewmembers had advanced degrees, including a veterinarian.

You can read the full article and see the extraordinary photos at:

There is also an excellent macromedia streaming video presentation of the material at:

The May-June issue of American Scientist includes “The Global Transport of Dust: An intercontinental river of dust, microorganisms and toxic chemicals flows through the Earth’s atmosphere,” by Dale W. Griffin, Christina A. Kellogg, Virginia H. Garrison and Eugene A. Shinn. The authors, scientists at the USGS, suggest that bacteria and fungi have been hitching trans-Atlantic rides on dust from the Sahara desert and settling into the warm waters of the Caribbean, contributing to the deterioration of its coral reefs. The summary is available at:

The Public Broadcasting System (PBS) has two video presentations of interest to aquarists and other lovers of the seas.

The exciting series “Shape of Life” is currently being aired on PBS stations nationally and internationally. The eight part series on the evolution of life starts with “Origins,” focusing on the sponges. It then presents programs on the cnidarians, the flatworms, the arthropods, the mollusks and the echinoderms. The final two programs are on the annelid worms and the chordates. You can find extensive previews and scheduling information at:

“Empty Oceans, Empty Nets” documents the crisis of marine fisheries as they are systematically fished down to the point of collapse. The video, Item A5390, priced at $24.98 can be ordered from: