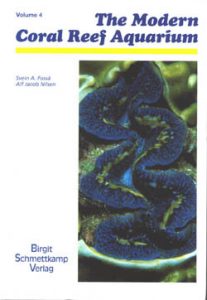 Alf Nilsen and Svein Fossa continue their important contributions to the field of aquarium science with the fourth volume of what these highly expert and experienced aquarists intend as a five-volume “encyclopedia.” To review the previous work in this series, the first volume concentrates on theory and technology. The authors discuss the ecology of natural coral reefs and present their perspectives on recreating these conditions as closely as possible in closed sy

stems, from setting up the live rock foundation of the aquarium to dealing with the intricacies of lighting, temperature control, filtration and water quality maintenance. They conclude the volume with an important chapter emphasizing the aquarist’s responsibility to foster reef conservation. Volume 2, subtitled “The Cnidarians in their Natural Habitat and in the Coral Reef Aquarium,” deals extensively with the phylum Cnidaria, and includes detailed and informative chapters on the biological requirements and general maintenance of these organisms of central interest to reef keepers. Organisms are rated on three scales: general aquarium suitability (GA), sensitivity (SE) and compatibility with tank mates (CO), and assigned a plus or minus on each scale. This convention is followed in the following volumes.

The third volume in the series focuses on the organisms other than cnidarians and fishes that inhabit our aquariums. The volume presents an overview of the evolutionary perspective and of taxonomy and covers single celled organisms, the sponges, the marine worms, and the crustaceans. It also includes a number of small invertebrate phyla – comb jellies, moss animals, sea spiders and horseshoe crabs, among others – that are rarely described in books for aquarists.

Volume 4 opens with a chapter titled “The Future of Reef Aquariums” by Bruce Carlson, former Director of the Waikiki Aquarium and current Vice President for Life Sciences at the under-construction Georgia Aquarium. Referring to the development of the science of aquariology he states, “Forty years ago, many people (including many coral reef scientists) scoffed at the suggestion that living corals might someday thrive in closed-system aquariums, but the pessimists were wrong…. Certainly, much more has taken place since 1962 than even the most optimistic hobbyist could have dreamed of at that time. So as we consider what might take place in home aquariums during the next forty years, the lesson is to be bold and imaginative when thinking about the future.”

He suggests the following will occur in the future of aquaristics: the culturing of ornamental reef fishes and invertebrates will become the leading edge of aquarium sciences; the development of a variety of specialized aquarium habitats such as surge zone, mangrove and seagrass habitats will become more common; the creation of highly colored “designer clams and corals” by combining knowledge of the effects of light intensity and wavelength with genetics will become possible; new technologies for water movement, lighting and UV generation and control will lead to greater standardization; and coral breeding, especially through availability of flash-frozen planulae, will become possible. He also suggests that a computerized comprehensive “encyclopedia of marine life” will become available and aquariums for endangered species may become “last refuges.” He concludes, “The one event I do not see happening in the future is the eventual demise of the marine aquarium hobby.”

Chapter 2 begins the formal substance of the book, with an extensive, even exhaustive, chapter on Mollusca. The authors cover taxonomy and evolution, general biology and the role of mollusks on coral reefs and in the coral reef aquarium. The phylum is presented systematically, with selected species, usually those of particular interest for aquarists, additionally described by geographic distribution, size, general description, reproduction (including information on captive breeding when available), food preferences and aquarium requirements. The material also includes ratings on the authors’ three scales. This general format is followed in the rest of the volume. The chapter is generously illustrated with excellent photos, both from aquariums and natural settings, as well as highly informative line drawings, as is the remainder of the book. The coverage of the Tridacnids, a good part of which is contributed by Daniel Knop, probably contains the most up-to-date material you’ll find on this important family. 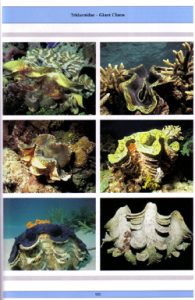 Chapter 3, Echinodermata, contains 200 pages on this highly varied group, including the sea stars, brittle stars, crinoids, urchins and sea cucumbers. As in the previous chapter the coverage is extensive, the material excellent and highly valuable for aquarists, the photos superb and the line drawings detailed and informative.

The text proper ends with Chapter 4, Tunicates and Lancelets. This fascinating group contains many attractive and colorful, but difficult to maintain members. The same high quality of information and visual material that characterizes the rest of the volume is here too, so those of you who wish to try to keep these organisms will find the best available information on them here.

In conclusion, this volume maintains the high standards set by the previous three in the series. For the high quality of the biological and aquaristic material and the outstanding photographic and artistic visuals, this book is truly one of the most important “must haves” in the library of the advanced aquarist. I congratulate the authors and their cooperating colleagues, including Bruce Carlson and Daniel Knop among others, for putting together this superb and beautiful addition to our knowledge base.

Aquaculture in the News

A front-page story in West Hawaii Today on December 16, 2002, “Success at Kona hatchery,” announced an important development in the aquaculture of a highly valued aquarium fish, the Flame Angelfish, Centropyge loriculus. Kona Blue Water Farms researchers have achieved the first known rearing of flame angelfish in significant numbers at their hatchery facility at the Natural Energy Laboratory of Hawaii. The research has been supported by a three-year project of the Advanced Technology Program of Hawaii’s Department of Commerce, devoted to developing marine fish hatchery methods.

The report states, “Although several others in Hawaii have produced angelfish in the hatchery in ones and twos over the last year, researchers believe this is the first time any angelfish species has been successfully reared in significant numbers…. Kona Blue Water Farms, a division of Black Pearls Inc., said there is great commercial potential for producing flame angelfish – and other high value ornamental species – in the hatchery to supply to the aquarium trade.” The report, reflecting the general hostility here to collecting local reef fish for the aquarium trade, goes on to state, “Producing these fish in the hatchery would alleviate the pressure on wild stocks of tropical reef fish, which are targeted by aquarium-fish collectors in Kona. Aquarium-fish collecting has sparked controversy in the last few years, with legislative moves to shut down the entire fishery and a compromise agreement closing off over one third of the coastline to aquarium-fish divers.”

(As I’ve reported, the strategy of creating closed “Fish Replenishment Areas” is proving to be effective, with increased populations of targeted species, primarily Yellow Tangs and other tang species, in the FRA’s.)

It is my understanding that there are about 200 young Flame angels in the current group.

NOAA and the national Fisheries Services have developed a document titled “Priorities for Effective Management of Coral Diseases.” They state in the summary, “Diseases and syndromes of scleractinian corals and associated species have increased in number in recent years, and they are now recognized as important phenomena capable of altering the structure and composition of coral reefs…. A long-term, multidisciplinary research and monitoring program for coral diseases is necessary to assist resource managers in identifying and responding to emerging coral diseases.”

The full text of the document can be found at: http://www.coral.noaa.gov/coral_disease/cdhc/man_priorities_coral_diseases.pd f