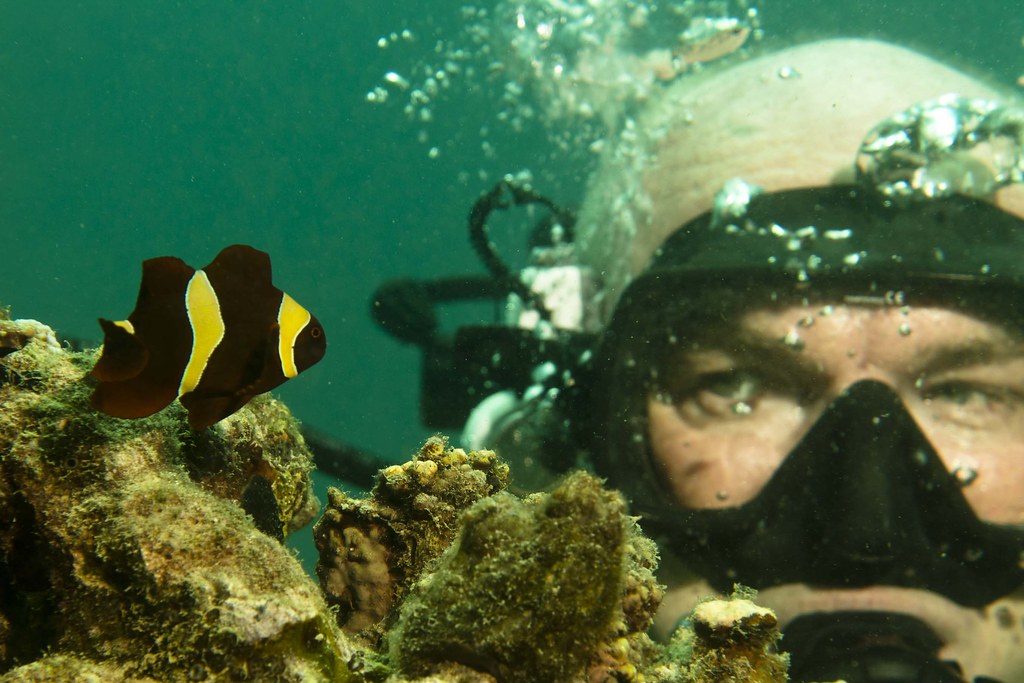 The basal split in the evolution of clownfishes occurred roughly ten million years ago (Litsios et al 2014), resulting in a clade comprised of the Percula & Ocellaris Clownfishes (A. percula & A. ocellaris), plus the Maroon Clownfish (P. biaculeatus). But while these are some of the most well-known species in the genus (see: Nemo), their close relationship hasn’t always been reflected taxonomically, and there are still many questions with regards to whether there are any additional cryptic species present within this group.

Morphologically, these three species share some clear similarities, primarily concerning the deeply indented profile of the dorsal fin (vs. relatively straight for most other groups) and the three vertical bars. While this latter trait is found in other groups, its manifestation in juveniles is subtly different—compare the straight bars of juvenile A. percula to the pennant-like expansion onto the dorsal fin in the clarkii or chrysopterus groups. However, the Maroon and Percula+Ocellaris clades have not traditionally been classified together; rather, they have typically been regarded as belonging to separate genera.

In the case of A. biaculeatus, the feature used to distinguish it from the other clownfishes has been the presence of a pair of strong spines at the edge of the operculum, giving rise to its alternate common name, the Spinecheek Clownfish. In all other respects, this fish is no different than Amphiprion, and, at this point, it has essentially been agreed upon in the scientific literature that Premnas needs to be synonymized, though it has yet to be formally revised.

A far more interesting question concerns just how many of the Maroon Clownfish populations should be considered valid species. Aquarists are well familiar with some of the differences lumped into this taxon (e.g. Gold Stripe Maroons, Lightning Maroons), but there has been minimal study to determine what the basis for this is. As we’ll see repeatedly throughout this review, there is always a clear biogeographical correlation to the phenotypic variety in Amphiprion. In the case of P. biaculeatus, the boundaries between its main populations are relatively straightforward in some regions but less so in others, and in all cases this requires further genetic investigation.

The Gold-Stripe Maroon Clownfish is the most distinctive phenotype, easily recognized by its thick yellow bars, which are generally wider than the diameter of the eye. It occurs almost exclusively in the Indian Ocean, from the Andaman Sea south through the Java Sea. Diver photography of this fish is surprisingly rare, and it may be that this is a less-abundant population relative to others in its group (though this is perhaps argued against by the steady stream of wild-caught specimens in the aquarium trade). The name Premnas epigrammata Fowler 1904 has been used with some regularity for this population by aquarium wholesalers (who often misspell it as epigramma). There may be other older names in the literature which will require some taxonomic sleuthing, including Sargus ensifer Gray 1854, described from the “Indian Ocean”, and Premnas trifasciatus Cuvier & Valenciennes 1830, described from Banda and Java and lacking a type specimen.

A separate population is likely centered on a region extending from Bali to West Papua and north to the Celebes Sea, but its distinctiveness is largely inferred by the speciation patterns seen in some of its congeners (most notable A. melanopus vs. A. frenatus) rather than from any obvious phenotypic differences. Identifying the Indonesian Maroon Clownfish is thus a challenge, as little in its coloration is consistent. Compared to the Indian Ocean population, the vertical bars are thinner and less yellowed, but less so than populations further east. The middle and posterior bars become increasingly thin with age, and in large females these can ultimately attenuate to the point that they disappear entirely, starting from the bottom up. The anterior bar likewise thins in the lowermost portions, but it remains thicker near the top, which provides a semi-reliable trait to distinguish this population from that found in Melanesian+Australian.

Coloration of the stripes seems to be important for telling the Indonesian population (mostly white) from that found in the Philippines and South China Sea (more of a creamy yellow). This is, however, variable to some extent, with overlapping regions like Northeastern Borneo and Northern Sulawesi showing both phenotypes, while some specimens present a confusing mix, with only the anterior bar being yellowed. Anecdotally, there may be a greater percentage of specimens in this northern population that fully or partially lose their bars with age, as such specimens are highly uncommon in Indonesia. Premnas biaculeatus was described in 1790 by Bloch, originally as Chaetodon biaculeatus, based on a specimen that originated in the Dutch East Indies, which might eventually limit this taxon to the Indonesian population. The northern population has never been scientifically described and will require further study into its population genetics before any names should be created for it. 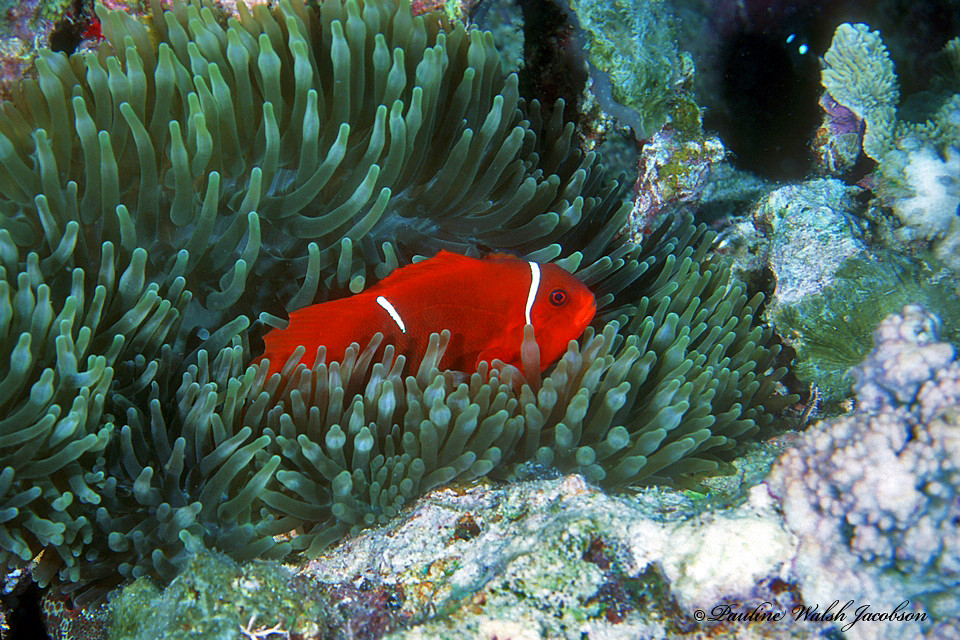 Finally, Melanesia and Australia warrants discussion for its unique population. The limits of this form are once again inferred based on our knowledge of related groups, particularly the endemism of A. percula in this same region, which shows a sharp biogeographic break at Cenderawasih Bay in New Guinea. Aquarists have discovered in recent years that Melanesian specimens show certain peculiarities regarding the shape of their white bars, generally being much thinner than in regions further west. The famed Lightning Maroon Clownfish originated from the waters off Papua New Guinea, and other instances of mutated bars seem restricted to this region, signifying some level of genetic endemism for this particular trait.

Comparing these Premnas populations to the closely related sister species Amphiprion percula and A. ocellaris reveals several biogeographic similarities, best illustrated in the genetic study of Timm et al 2008. These authors found evidence for a genetic split between A. percula and A. ocellaris dated at ~2.9 MYA, along with a similarly ancient split that divided populations in eastern portions of Indonesia (Tomini Bay & Cenderawasih Bay) from western regions (Borneo & Sulawesi), as well as a more recent split for a distinct Indian Ocean population, dated at ~0.9 MYA—specimens from north of Wallace’s Line in the Philippines and the Gulf of Thailand weren’t tested but can be presumed to represent yet another separate population. This suggests that within A. ocellaris there lurks a wide variety of cryptic biodiversity, with perhaps as many as 4 separate species being warranted, though with relatively minimal phenotypic differentiation amongst these.

Distinguishing a Percula Clownfish from the Ocellaris Clownfishes is not an easy task. The most noteworthy diagnostic trait relates to the spinous dorsal fin, which has modally one fewer spine (10 vs. 11) in A. percula and a comparatively shorter height, though specimens from the undescribed population in Eastern Indonesia can be intermediate. Coloration is also helpful, but unreliable on its own. Wild-caught A. percula are often partially melanistic between the anterior and middle white bars, which sometimes spreads to encompass the entire fish in black. On the other hand, specimens of A. ocellaris usually have their black coloration limited to a thin marginal strip circumscribing the white bars. But there are also specimens of A. percula which have their black coloration greatly reduced and appear very ocellaris-like, and there is a well-documented form of A. ocellaris from Darwin, Australia that is entirely black, though not exclusively so, as orange specimens occur here as well.