Pretty in Pink: The Plush Side of Halichoeres

Wrasses are an undeniable icon with a myriad of species that run the gamut of different genera. Being one of the largest families of marine fishes with over 500 species, it is not surprising that even in the aquarium trade, wrasses have cemented their place as an evergreen staple winning over aquarists through a multi faceted plethora of qualities.

Be it the adrenaline pumped Cirrhilabrus and Paracheilinus that put on show stopping nuptial displays, or the diminutive and taciturn Wetmorella that are cloistered yet charming, there is a wrasse for everyone. Of the veritable variety of wrasses, none is perhaps quite as popular as the Halichoeres genus. 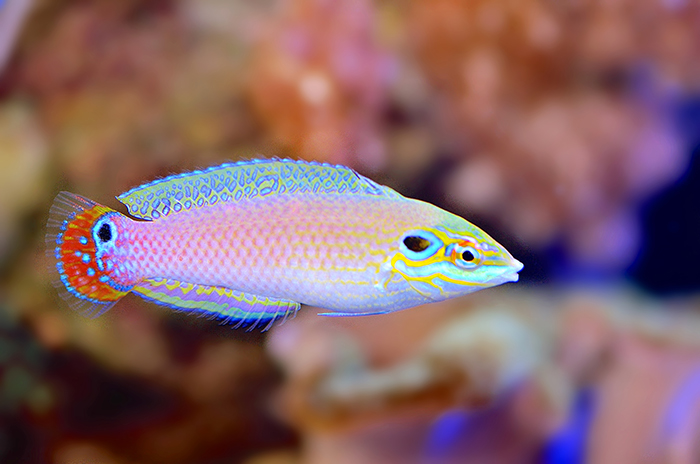 Halichoeres are slender in shape, with teeth that are suited for crushing and picking at sessile invertebrates. Like many protogynous hermaphroditic species, they are often found in small groups of mostly juveniles and females and a single male that governs his harem. The females are capable of sex changing into males during a later stage, depending on the social status of the hierarchy. Most commonly, when the terminal male dies, the next female in line replaces him and so on and so forth.

Being a member of the “sand dwelling” wrasses, Halichoeres like Macropharyngodon, Anampses, Pseudojuloides and the like, require sandy substrate which they use for cover and retirement during the night. In captivity you’ll notice that they adopt a rather consistent wake and sleep time everyday. Halichoeres are fond of sandy open substrates near or at outer reef fronts, rich in sessile invertebrate growth. In captivity, suitable sandy terrain should be present to allow for digging, and depending on the tank volume, more than one individual can be housed together, taking into consideration the presence of only one male. 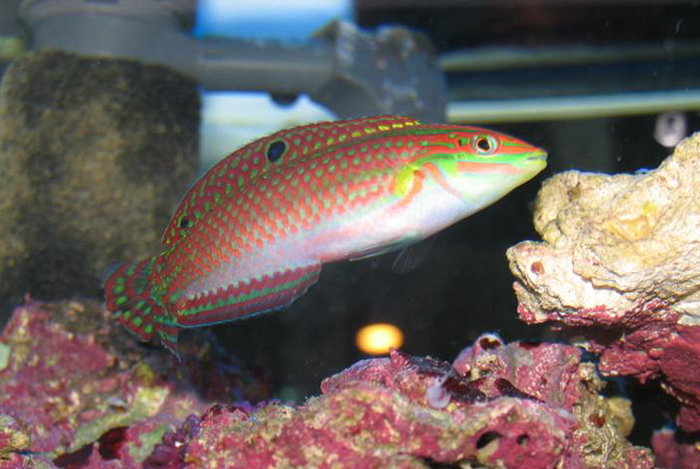 Due to such a wide range of variations, fish like the H. ornatissumus can be difficult to identify.

The genus in itself is extremely varied, with a deluge of species spanning across all warm waters of the major oceans. There is of course, scientific debate regarding the placement of certain species, with some suggesting the erection of new genera. Whatever the case, it is very clear that distinct complexes are found within the genus itself.

Some of the well-known complexes such as the H. ornatissimus group houses a collection of very similar and confusing species. Perhaps the most favored amongst the lot are those in the H. chrysus group, which is most widely represented by the yellow wrasse, sometimes called the canary wrasse. 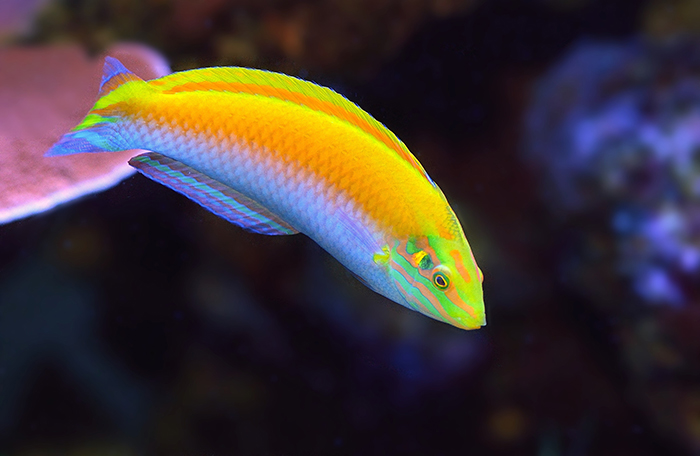 Their almost boyish and puerile behavior is amusing at best, and what they lack for in party tricks, they make up for in coloration. Most of them have an added bonus of being rather useful as biological pest controllers, and although this doesn’t apply to every single individual, a vibrant reef tank does seem to benefit from the odd Halichoeres or two.

As mentioned before, the most often utilized species in the H. chrysus group is well, H. chrysus. It is a common and widespread species found in many shallow reefs of the West Pacific, and likewise is an evergreen aquarium staple. Like many species of reef fish, it has an allopatric sister that replaces it in the Indian Ocean, and that species is Halichoeres leucoxanthus. Less commonly utilized, but by no means rare, is Halichoeres iridis from Africa and Mauritius. This species pays homage to the latter two, but the body coloration is replaced by a dark inky purple. 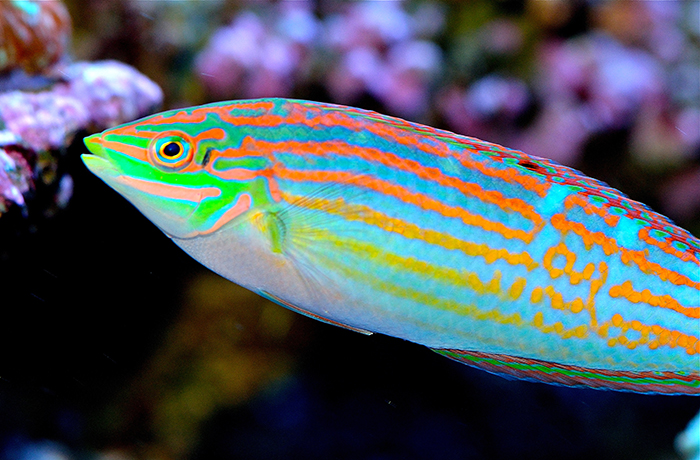 While none of the Halichoeres can be considered difficult, it is quite often that more advanced level aquarist find themselves in a predicament where H. chrysus and the like becomes a jaded commodity for their reefs. There are solutions for people stuck in the rut, and if yellow, green or red becomes a colour that is too boring for your taste, then perhaps pink will provide an alternative option. 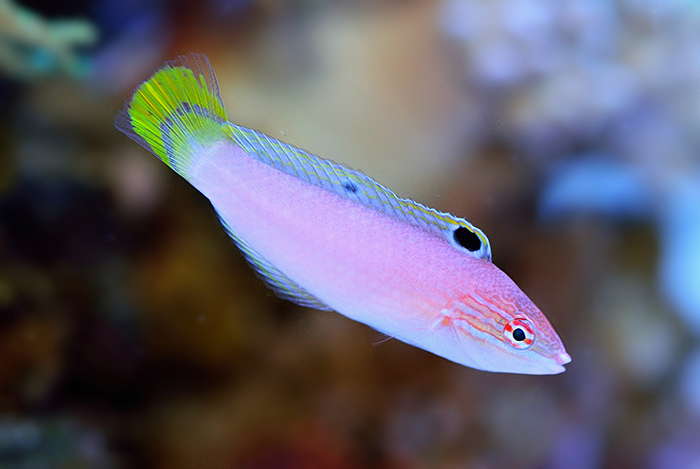 Pink is a rather uncommon coloration in marine fish, but in the Halichoeres genus, it is represented very well by three species, one of which is uncommon, and another can be classified as rare. Today we’ll be talking about Halichoeres pallidus, H. trispilus and H. melasmapomus. These are three rather unorthodox species that don’t quite fit the bill as the stereotypical choice for a reef tank.

Halichoeres pallidus, also called the Babi wrasse, is a powder pink animal that ranges predominantly in the Banda archipelago and the Babi Island in Flores. It can also be founds in scattered parts of the Indonesia, Philippines and eastwards to Micronesia as well. The name “babi” comes from the Indonesian and Malay word for pig, which is quite coincidentally similar to the etymology behind the naming of Halichoeres. Halichoeres in greek literally means salt pig, from the greek words “alis = salt”, and “choiros = pig”. Combining the etymology behind the generic epithet with the colloquial name of this species, it essentially is double the pork, so to speak. 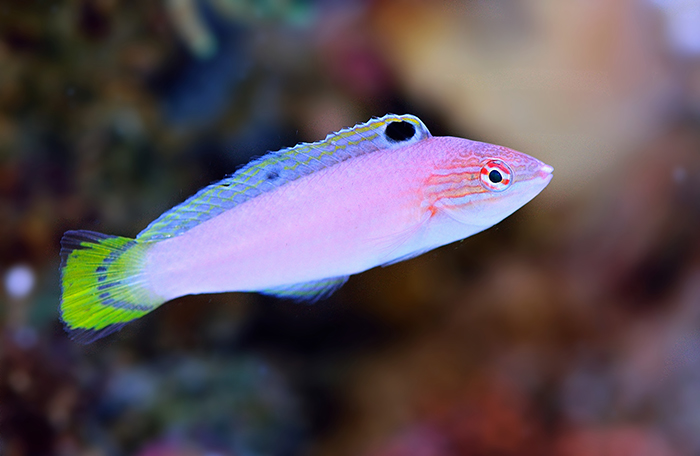 Despite its largely Indonesian range, H. pallidus is surprisingly rare in the trade, and shows up very sporadically and randomly. Like many of its cousins, H. pallidus inhabits the same habitat of clear waters along outer reef walls, near sandy banks rich in invertebrate fauna. However unlike its shallow water cousins, H. pallidus is usually found at depths only starting at 100ft and below, and at times up to 200ft. This coupled with the fact that it is a relatively unknown species in the trade with low demand, is probably the reason for its scarcity. As with most Halichoeres, it is most probably not uncommon in the wild, preferring to live in groups.

The babi wrasse recalls H. chrysus in appearance, but on the second dorsal spine it possesses a large black spot, which the former lacks. H. pallidus is uniformly powder pink, with a lemon yellow tail rimmed in clear edges. Larger males may develop a flag pattern as they age, and develop green tribal face paint patterns on their cheeks, which is reminiscent of many species in this genus.

Apart from the H. chlorocephalus group, H. pallidus also forms a distinct clade of deeper water species. The other member in this complex includes Halichoeres trispilius. Like H. chrysus and its sister H. leucoxanthus, H. trispilus is the Indian Ocean representative and replaces H. pallidus in its range. H. trispilus is widespread in the Indian Ocean, and ranges to Java where it is at its easternmost limit of its geographical range. 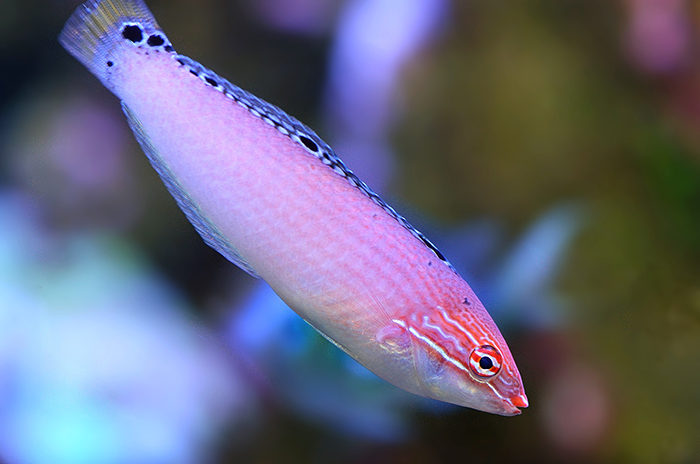 Like H. pallidus, it is also powder pink, but more often than not, in a slightly lighter more washed out shade. It is more frequently encountered in the trade where it appears in Maldivian imports. H. trispilus is not found in quite the depth that its Pacific cousin frequents, and can be encountered at the shallowest of 65ft. It can however, range up to 100ft and often in excess of that.

The third species that shares the same ground color as the two is the incomparable H. melasmapomus. In this beautiful species, the preopercular region is decorated in a large black spot rimmed in metallic blue. A similar ocelli is also found at the caudal peduncle region where it sits on the same horizontal plane as the ear spot. 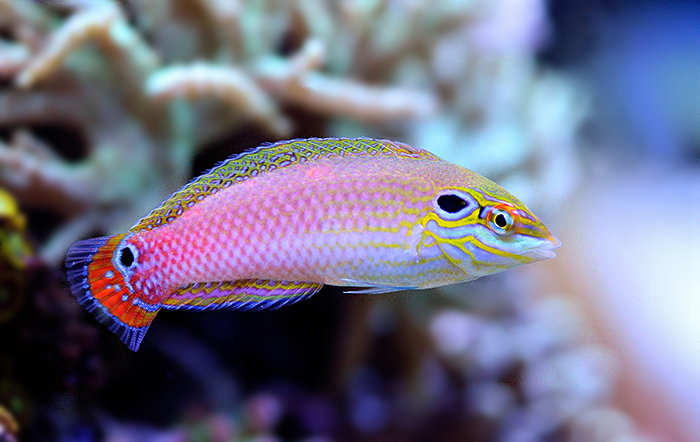 This gives H. melasmapomus the common name of “earmuff wrasse”. H. melasmapomus is wide spread in the Western Pacific, and like the previous two, can be found in rather deep water as well. It is never common in the trade, but can sometimes be found coming out of the Philippines, Indonesia, Australia and the Western Pacific island chains. Fully-grown males have a beautiful head pattern consisting of a labyrinth of red and purple stripes. The fins are largely yellow and the tail is an eye catching crimson.

A few geographical forms exists for this species, with the Western Australian form being the most different. All three of these pink wrasses have similar husbandry requirements, and are not difficult to keep. As with all species in this genus, a sandy substrate is a must.

While there is nothing wrong in keeping a yellow wrasse, often times we find ourselves looking for something with a little more character, or something a little less “plain Jane”. If you look hard enough, and wait patiently enough, perhaps you’ll come across one of these pretty in pink Halichoeres. They’re not common, but they’re not impossible to find. With the same friendly disposition, same pest controlling abilities, these fish would make a fine addition to any reef. The only added bonus? It now comes in pink!