Major advancement has been missing in the aquarium lighting
arena until PFO Lighting recently introduced their
light-emitting diode (LED) system. The Solaris is one of the
first widely available ‘advanced’ lighting arrays.
The Solaris is available in several models and all offer some
advantages over other lighting. I was fortunate enough to
receive a beta model from PFO for testing. Although this
prototype lacks some of the progressive features of the
production models, it enabled me to evaluate a high intensity
LED array. The prototype I received has 25 3-watt LED lamps (13
blue and 12 white) with an advertised Kelvin rating of 20,000
(see Figure 1). 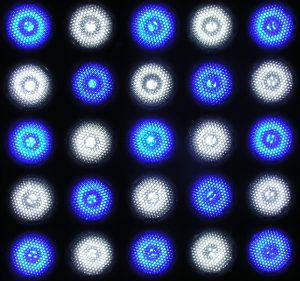 Figure 1. The
LED array of a 14” Solaris luminaire.

PFO makes some bold claims in their advertising. How well do
these ‘facts’ hold up under close scrutiny? Several
testing protocols were used to evaluate lamp intensity, lamp
spectral quality and heat transfer.

Photosynthetically active radiation (PAR) was measured with
a LiCor LI-189 quantum meter with cosine-corrected submersible
sensor. This instrument is within its recommended 2-year
calibration period. Calibrations were made for
‘air’ or ‘water’ as appropriate. An
Apogee quantum meter (using the ‘sunlight’ mode)
was also used to take measurements within an aquarium, and
these results were compared to those of the LiCor
meter.

A hand-held Project Star spectrometer demonstrated a visual
display of light energy between 400 and 700nm, and was recorded
by an Olympus C-5050 digital camera in ‘macro’
mode.

Spectral quality was analyzed with an Ocean Optics USB-2000
spectrometer and cosine-corrected CC-3 collection lens. Raw
data from the spec was interpolated to 1nm increments and
smoothed with the Savitsky-Golay algorithm. This information
was further analyzed for color percentage in a proprietary
Excel program.

Temperatures were measured with a ‘laboratory
grade’ mercury thermometer and a laser-sighted infrared
temperature ‘gun’.

Light intensity, along with spectral quality and other
factors, is an important part of captive coral maintenance. If
the light intensity is too low, the zooxanthellaes’
compensation point will not be met, sometimes with dire
consequences. On the other hand, too much light will cause
photoinhibition and zooxanthellae and the coral host can
suffer.

PAR (photosynthetically active radiation) was measured 50mm
below the protective lens situated immediately below the
luminaire’s LED array. Forty-eight measurements were
taken and the results are graphed in Figure 2. 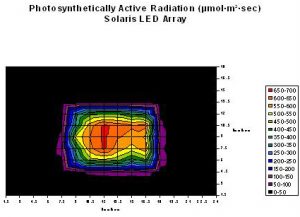 An important selling point of LEDs is invariably that of
lamp longevity. Philips maintains their white and blue Emitters
have an expected life of 50,000 hours. The lamps are reportedly
at 70% of original output at that point. If the daily
photoperiod is 12 hours, then a 30% reduction in intensity
could be expected in about 11 years. Figure 3 reports projected
lamp intensity after 11.4 years of use. 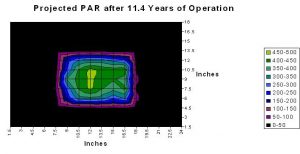 PFO advertises the Solaris to produce as much PAR as a
250-watt 20,000K metal halide lamp. This is a difficult
claim to verify – measuring and comparing the output of
different light sources is, at best, a challenging proposition.
Many variables come into play including type, age, production
run and temperature of the light source, shielding material,
lamp orientation, type of ballast, line voltage, lamp-to-sensor
distance, type of reflector (including material, geometry,
condition, etc.), type of sensor, effect of heat on the sensor
and so on. I took time to control and maintain as many
variables as possible, including lamp-distance-from-sensor,
sensor temperature, etc. The XM 20,000K lamp was shielded for
UV with an acrylic screen (the Solaris luminaire also has a
‘splash guard).

Since these LEDs channel a relatively high proportion of
input energy to visible light production, how does their
efficiency compare to metal halides? We are comparing a metal
halide lamp (a point source) to an LED array (multi-point
source), and in order to fairly evaluate light production we
should examine the light intensity over a broad but
standardized area. Without going into a lot of detail, we can
simply compare lamp wattage to PAR production over a given
area. Using the data shown in Figures 2 and 4, plus
standardized surface area, the 75-watt Solaris produced 89.4%
of the PAR generated by the 250-watt XM 20,000K
lamp.

Figure 4. PAR
values of the 20,000K lamp (with acrylic UV shielding) used in
one of the comparisons. The rather unique light distribution
pattern is due to the reflector geometry.

This equates to totalized PAR (µmol·sec) over a
normalized surface area of 113 µmol·sec per watt for
the Solaris, and 38 µmol·m²·sec per watt
for the metal halide lamp. See comments in the Discussion
section. However, we should also consider
Photosynthetically Usable Radiation (PUR).

Light intensity is only part of the picture, and PUR should
also be considered. PUR is that fraction of PAR that is
absorbed by zooxanthellae photopigments thereby stimulating
photosynthesis. For our purposes, we will consider PUR as those
wavelengths falling between 400-550nm (absorption bandwidth of
chlorophylls a, c², and peridinin) and
~620-700nm (red absorption bandwidth of chlorophylls a
and c²).

When all LEDs are on, their emission peaks at 458nm. Without
the 4 LEDs that can act as ‘moonlight’ the spectral
peaks shifts ever so slightly to ~459nm. This is well within
the absorption bands of and other photopigments founds within
zooxanthellae. See Figure 5.

Figure 5. The spectral signature
of the Solaris when all 25 LEDs are in operation. Intensity is
reported by the Ocean Optics software as ‘counts.’
The amplitude of the counts in Figure 5 and Figure 7
mean nothing -see the text for PAR measurements.

Figure 6. Visualization of the
Solaris LED spectral quality. A hand-held spectrometer clearly
shows that the combination of blue and white LEDs do indeed
produce full-spectrum light. See Table 1 and Figure 5 for
further refinement of this information. 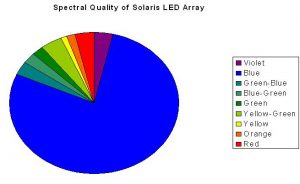 Figure 7. A
graphical representation of the SPD of the Solaris LED
array.

Figure 8. The
SPD of the XM metal halide
lamp. 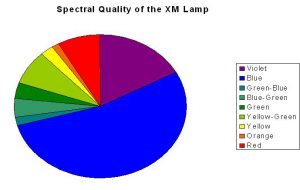 When we compare the spectral qualities of the LED array and
the metal halide lamp, we see that the Solaris produces more
PUR. See Figure 10. 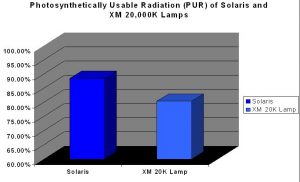 PAR within an Aquarium

This particular portion of testing presented more challenges
than all others combined. The Solaris used in testing is but
12” long, making it suitable for small and nano-reefs.
The LiCor PAR sensor is used as the gold-standard in testing,
but the size of the sensor makes it of limited use in small
tanks. The Apogee PAR meter with its smaller sensor makes it
practical for use in smaller tanks – but its sensor is
less accurate. Comparisons between the two meters found the
Apogee’s response is closer to that of the LiCor when the
toggle switch is in ‘sunlight’ mode. Still it reads
about 10% low when compared to the much more expensive LiCor
meter. Correction factors were determined and applied to the
results produced by the Apogee. The highest corrected
measurement in 9” of water and directly below the middle
of the Solaris luminaire was ~330
µmol·m²·sec. The Solaris does a good job of
producing a tight beam (note the rectangular light pattern in
Figure 2). PAR values fall off dramatically in the corners of
the aquarium (data not shown). Placement of corals within the
aquarium should therefore not be haphazard but done instead
with forethought and planning. Branching corals
(Acropora spp., among others) and Tridacna clams
should be placed directly below the luminaire, while
shade-loving animals such as Discosoma and others will
probably do well outside the direct light beam.

Heat transfer from a lamp to an aquarium’s water can
cause significant warming.

PFO advertises that all heat generated by the LED array is
directed away from the aquarium. To test this claim, the
Solaris was placed atop an aquarium and about 2” from the
water’s surface. The Solaris was allowed to operate
continuously for about 27 hours, and temperatures were measured
by an infrared heat gun and a ‘laboratory’
thermometer. In all cases the water temperature did not exceed
room temperature (maintained at 24.3ºC by room air
conditioning). The top of the luminaire is vented, and it did
warm to 25.5ºC while the bottom (lamp side) stayed at room
temperature. It appears that PFO’s claims are
accurate.

PFO selected and uses one of the best LEDs on the market
– the Philips Lighting 3-watt Luxeon Emitter LEDs.
Selection of LEDs for use in an aquarium fixture is critical
and, again, PFO has done its homework. The
‘batwing’ design of the Philips Emitter series
allows for superior thermal management around the diode since
it allows the junctions to act as thermal sinks and permits
airflow for cooling. Heat is an enemy of LEDs since it
can shorten their expected lifetime. The Solaris luminaire
utilizes two cooling fans to maintain air flow across the
circuitry. PFO claims the electronics within the luminaire are
encapsulated with a material impervious to the inevitable salt
spray. Unprotected circuitry was an issue with some of the LED
banks produced 5 or so years ago. PFO has apparently overcome
this problem and their protective circuit coating should go a
long way in preventing corrosion.

The LEDs are mounted in Fraen ‘wide beam’ lenses
and housings. The dispersion angle is 42º for the blue
LEDs and 45º for the white ones. At first, the use of the
wide beam lenses seemed puzzling until I took some PAR
measurements. It appears as if use of the narrow or medium
lenses would be too efficient and create hotspots of
high-intensity light. The wide beam seems correct for most, if
not all, home aquaria applications.

Lighting requirements of many, if not most, corals is
overestimated by many hobbyists and lower light intensity offer
advantages. This is why. Many corals are stressed by high light
intensity and have natural means to deal with excessive
radiation, either through dynamic or chronic
photoinhibition. Chronic Photoinhibition, from the
coral/zooxanthellae perspective, is by far the worse of the two
– it could eventually kill zooxanthellae. Obviously, we
want to avoid this. On the other hand, dynamic photoinhibition
involves biochemical conversion of excess light energy to
non-radiant heat. This is normal and does no apparent harm to
either coral or symbiont. However, it is a waste of light
and the electricity needed to power the lamps. And you’ll
pay for it every month. In addition, few hobbyists would want
to operate a hot (>260°C, or >500°F) metal
halide lamp just two inches from the water’s surface. The
halide lamp will definitely transfer heat to the aquarium.
Unless properly shielded, metal halide lamps can produce high
amounts of detrimental ultraviolet energy. The Solaris produces
practically no UV radiation and – for our purposes
– it is safe to say it produces none. Blue LEDs have been
shown to trigger expression of a pink coloration (a
‘pocilloporan’) in the stony coral Pocillopora
meandrina.

Very low heat production is perhaps the greatest advantage
of LEDs. Circulation pumps will add more heat than this
lighting system, but this can be overcome easily through use of
a relatively large sump or by airlifts (which are practical in
systems compatible with the small size of the 14” Solaris
luminaires). Aquaria large enough to accommodate larger Solaris
models will also benefit from lessened lamp-to-water heat
transfer.

Another advantage is the practically non-existent
ultraviolet radiation. Heat and UV are known causes of coral
bleaching. See the PFO Solaris website at
www.pfolighting.com
for a ‘cost-savings’ calculator and details on the
features that my prototype does not have.

If you’re wondering if a multi-point light source can
produce ‘glitter lines’ (or flicker or any of
several other names) – fear not: The Solaris lighting
system (along with water surface agitation) did indeed produce
this effect.

Joy Meadows mentioned in a recent conversation that she had
discontinued use of a chiller after replacing her metal halide
lamps with a Solaris lighting system.

Ms. Meadows is no stranger to reef aquaria, as those who
know her can attest. 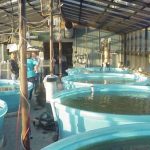 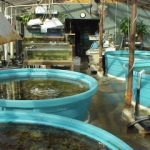 More photos can be found in this month’s Product Review Album.

PFO offers a two year warranty on their Solaris product
line. While these units are not inexpensive, one should look at
long-term costs. I highly recommend you do so.