This month, we’ll take a close look at Apogee Instruments’ new MQ-500 quantum (PAR) meter and sensor with improved spectral response. The MQ-500 meter is a handheld device, with a water-proof sensor connected with a cable about 2 meters in length. It is battery operated and has data-logging capabilities. It is said to favorably compete with the more expensive PAR meters and sensors due to a ‘blue-enhanced silicon photodiode and custom optical filters’ within the light sensor. This sensor is advertised to better report light output from LEDs. Does it? Does it offer any advantages? To answer this question, we’ll pit the Apogee instrument against the gold standard of PAR meters – the Li-Cor LI-1400 meter and LI-192 sensor. And, finally, why should I own a quantum meter?

Late addendum to this article: I received word from Chris Madsen at Apogee designed a quantum meter especially for underwater use (that is, aquarium or aquaculture use). This device (dubbed the MQ-510) has the same features as the MQ-500 quantum meter. Its measurements of photosynthetic photon flux density are corrected for the immersion effect. It uses the same sensor tested in this article. See Figure 1. 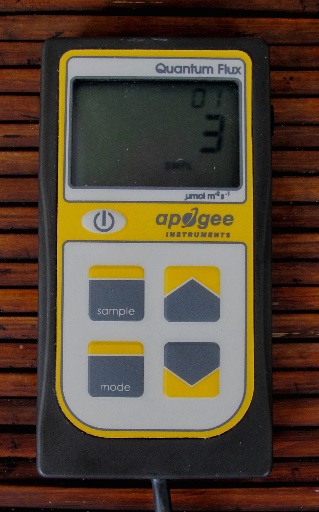 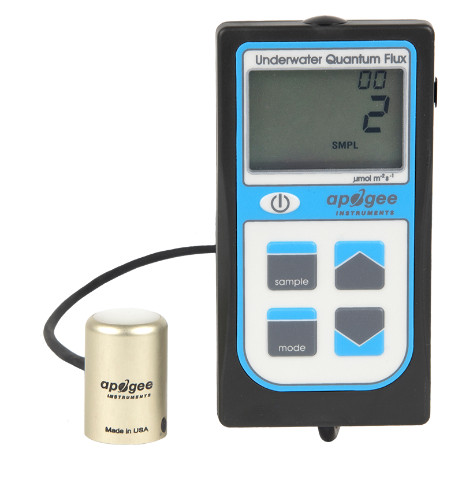 Figure 1. You heard it here first. Apogee Instruments’ new MQ-510 quantum meter. Its design and function have aquarists in mind.

Although I had been a marine aquarist since the 1960’s, my ‘scientific’ pilgrimage began in 1991 with the purchase of a quantum meter. It is believed that at the time I purchased the quantum meter from Li-Cor Biosciences, I was the only hobbyist to use such a device to measure light intensities within a captive reef (although a few were in the hands of professional aquarists such as Pete Mohan at SeaWorld Ohio).

The trend at that time was geared towards various (often pricey) gadgets and little attention was paid to measuring or monitoring light intensity, something that was said to be very important in the successful husbandry of many coral reef invertebrates. Yet, the amount of light was not quantified and was merely referred to as ‘low’ or ‘high’ intensities. It seemed that much work needed to be done in the lighting arena, so my attention turned to works published in scientific journals. References to light intensities reportedly received by corals, other photosynthetic invertebrates, and marine algae in these journal papers used terms I was quite unfamiliar with, such as photosynthetically active radiation (PAR) and photosynthetic photon flux density (PPFD), compensation & saturation points, and so on. This was in the days before effective search engines, and literature often had to be obtained through inter-library loan services or visits to university libraries. Through quite a bit of effort, a message emerged – understanding the lighting requirements of photosynthetic plants and animals would require a substantial investment in specialized equipment. To this end, I purchased the ‘quantum meter’ and submersible sensor from Li-Cor Environmental in Lincoln, Nebraska, USA to the tune of about $1,500.

Over the course of a few years, the price of quantum meters dropped substantially but these less expensive sensors were not as accurate as those meters costing 10x as much. Today, this situation has changed. Apogee Instruments’ recent introduction of their MQ-500 quantum meter with improved spectral response is the latest in a line of improved instruments.

Before continuing, perhaps it is best to familiarize ourselves with some of the technical jargon used in this and other articles. 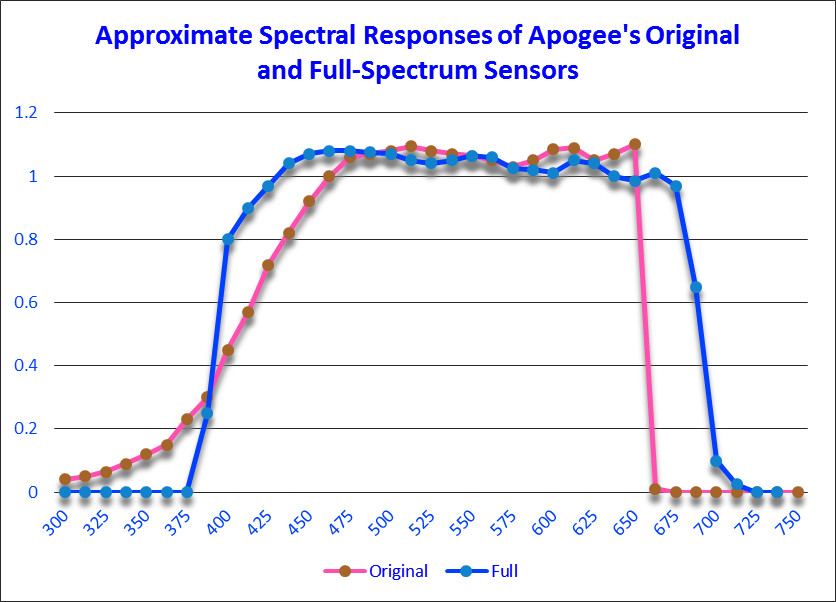 Light Intensity and Its Effects on Photosynthesis

Books have been devoted to this subject but we’ll briefly review terminology used by botanists, phycologists (scientists studying plants, algae and photosynthesis) and coral reef biologists. Photosynthetic organisms require a minimum amount of light. When the amount of light causes photosynthesis to produce the amount of oxygen required to meet the organism’s respiratory rate, then the compensation point has been reached. Lighting should, at a very minimum, meet the compensation point. Compensation Points vary, but it is generally agreed that light intensity should not drop below 100 µmol·m–²·sec-1in any non-shaded area in a reef aquarium. After the compensation point has been met, the rate of photosynthesis will be proportional to the amount of light, but only up to a point. When increased lighting does not increase the rate of photosynthesis, the saturation point has been achieved. Generally, light intensities of 200 – 400 µmol·m–²·sec-1are acceptable and will produce high rates of photosynthesis (as well as triggering desirable reflective and fluorescent colors in corals). Exceeding the saturation point wastes expensive energy and could over-heat an aquarium. Greatly exceeding the saturation point could be harmful but natural mechanisms are in place. The ‘pressure-relief’ valves of photosynthesis are called xanthophyll cycles, where excess energy can be shunted away from the photosynthetic apparatus in a process called dynamic photoinhibition. If the abilities of these xanthophyll cycles are not sufficiently protective, chronic inhibition occurs. Chronic photoinhibition can reduce the rates of photosynthesis and, if allowed to continue, can cause permanent damage to the coral host and photosynthetic symbionts. In extreme cases, over-lighting can cause a great reduction (or almost total loss) of either photopigments found in zooxanthellae (such as chlorophylls a & c2, peridinin, etc.) or expulsion of zooxanthellae (in a process called bleaching). Bleaching can result in death of the coral.

Sensor Size: 22.5mm diameter by 35mm tall (0.886″ x 1.38″). Size matters! It is an important consideration when the purchase of a quantum meter is being contemplated since reef hobbyists are often working within a relatively small space filled with animals easily damaged by a bulky device. While this new sensor is slightly larger than the older Apogee sensor, it is much smaller than Li-Cor’s. See Figure 3. 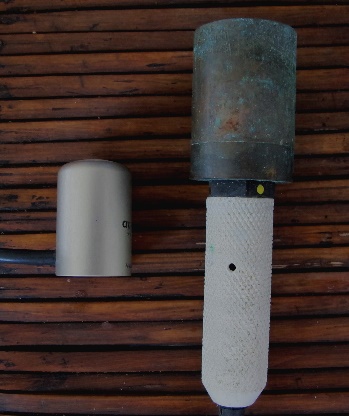 Software can be downloaded here: www.apogeeinstruments.com/downloads

This software is available for both PC and MAC versions at no additional charge.

See Figure 4 for an example of data obtained through the data-logging feature. 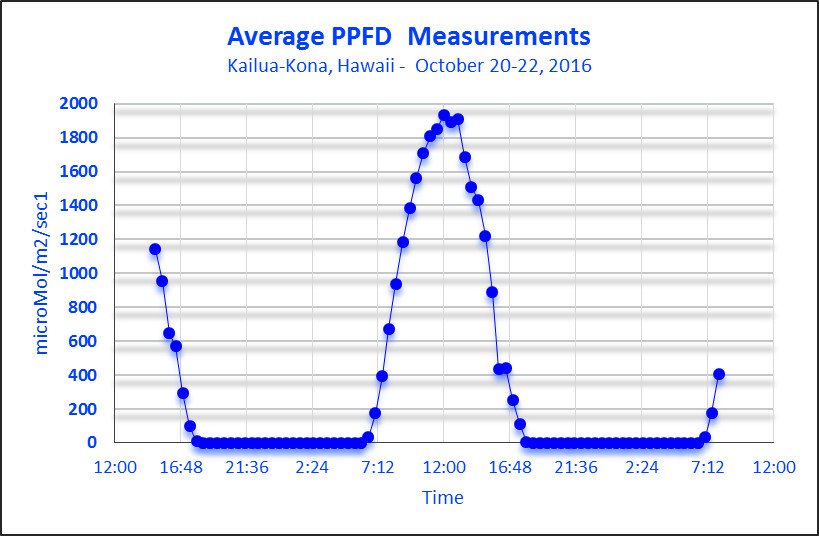 Figure 4. Light intensities over a two-day period as reported by the Apogee MQ-500. These are measurements made in air.

An interesting tool that data logging makes available is that of a summation of light falling upon a coral or another photosynthetic organism during the entire photoperiod. This is known as the Daily Light Integral or DLI. DLI is expressed as Moles Photons per Square Meter Per Day (mol photons·m²·day1.) The MQ-500 will perform this function. The best analogy I’ve heard is that which compares light particles (photons) to rainfall. While knowing instantaneous PPFD can be of great value it is comparable to counting the number of raindrops per square meter per second. The concept of the total number of raindrops (inches per day) is what DLI describes for photons. See here for details of DLI for Hawaiian corals: http://www.advancedaquarist.com/2013/12/lighting

It is well established that proper lighting is very important in the husbandry of aquatic photosynthetic organisms (corals, Tridacna clams, plants and algae). Too much lighting is wasteful and expensive, and it might tend to overheat smaller aquaria resulting in the use of a chiller or another water-cooling device. Too much light can also trigger dynamic photoinhibition (through conversions of a number photosynthetic pressure-relief valves involving xanthophylls). Worse, continued use of excessive lighting can cause chronic photoinhibition, where host and symbionts expend energy towards repair of photo-damage instead of other things such as growth or reproduction. In worst cases, photosymbionts such as zooxanthellae and zooxchlorae are killed, or expelled by their hosts in a process known as bleaching.

On the other hand, under-lighting will force the host/symbiont to consume energy reserves until they are completely expended. In this extreme case, due to extremely low photosynthetic rates, the animal will perish unless feeding (heterotrophy) can make up for the losses. Bear in mind, that increased feeding could result in detrimental water quality issues.

Many hobbyists obsess over calcium, magnesium, or other chemical concentrations, perhaps because the recommended values are well-established and are inexpensive to monitor. Lighting, on the other hand, is a more complex subject. In addition, it requires an investment in a PAR meter. But these facts should not discount the importance of knowing how intense the light fields are within your aquarium.

Apogee claims its full spectrum sensor can accurately determine the output of light-emitting diodes (LEDs) that generally have narrow spectral bandwidths. I tested several light sources and compared the results obtained with Apogee and LICOR sensors (in air). Note that measuring the intensity of a single point-source LED can be tricky (aquarium LED fixtures use multiple LEDs unlike most of the LEDs tested below.) I built a jig to hold the sensors and exercised reasonable care in making these comparisons, however, the measurements would likely have been a little closer if I had used an integrating sphere. With that said, there are the results:

Details on the spectral characteristics of some of these lamps can be found here: http://www.advancedaquarist.com/2016/8/aafeature

As I have suggested, a PAR meter is a good investment for a hobbyist. If the purchase price is out of reach, perhaps your local aquarium club can purchase one and lend it to members.

I am impressed with the performance and price of the MQ-500 quantum meter. So much so, that I will regulate use of my Li-Cor LI-1400 quantum meter/ data logger and submersible sensor for low light work (such as moonlight) or very high light intensity (exceeding the Apogee’s maximum reporting of 4,000 µmol·m²·sec1. To the best of my recollection, there has been only one instance where I needed a meter that could measure higher than 4,000 µmol·m²·sec1 – this was in measuring the output of a Fusion sulfur lamp where the output could exceed Li-Cor’s maximum measurement of 20,000 µmol·m²·sec1).

In closing, I have listed below 11 Reasons to Own a PAR Meter:

And finally, for insights on the types of zooxanthellae and their hosts, see here: http://www.advancedaquarist.com/2016/2/aafeature