Innovation and controversy have always been closely linked and such was certainly the case when LED arrays were introduced to the aquarium market some 18 months ago. For the most part, the controversy has subsided with practical experience replacing conjecture and speculation. However, improvements in design and function have also been noted. This article will report on the performance of one such luminaire – the powerful LED array from Aqua Illumination. 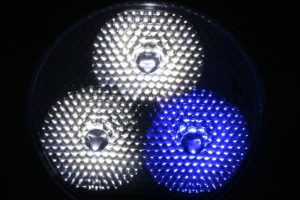 What is an LED?

LED is an acronym for light-emitting diode. They have been around for many years and were initially used on indicators of open/closed electrical circuits in mundane applications such as coffee pots and alarm clocks. Research over the last few decades has produced LEDs in a variety of colors, including those capable of producing ultraviolet and infrared radiation. Light production capability has also increased dramatically in the more expensive LEDs (and it is these this article will discuss – these particular LEDs from Seoul Semiconductor are $5-$6 each when bought in bulk quantities).

LEDs are relatively simple devices and are basically a positive/negative junction with a semiconductor ‘chip’ doped with various metals (and fluorescent phosphors in the case of many of the LEDs producing ‘white’ light). An electrical current passing across the semiconductor chip within the reflector ‘excites’ its coating resulting in nearly monochromatic light (depending upon the chip’s coating). The reflector can be of different shapes and determines the dispersion angle of the emitted light. 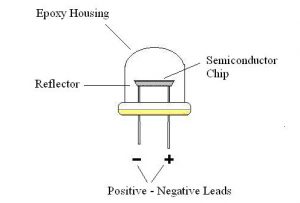 The Heart of the Aqua Illumination System – Powerful LEDs and Lenses

AI incorporates into their luminaires some of the most powerful LEDs on the market– Seoul Semiconductor’s Z-Power ‘P4’ white LEDs (3.8 watts each) and blue LEDs (2.5 watts each). These, in conjunction with Khatod lenses manufactured especially for use with Seoul Semiconductor’s LEDs, result in focusing light into strong ‘beams’ which put light where you want it – into the aquarium and not on the walls and floor.

Photosynthetically active radiation (PAR) was measured with an Apogee Instruments quantum meter with cosine-corrected submersible sensor. This instrument is within its recommended 2-year calibration period.

A hand-held Project Star spectrometer demonstrated a visual display of light energy between 400 and 700nm, and was recorded by an Olympus C-5050 digital camera in ‘macro’ mode.

Spectral quality was analyzed with an Ocean Optics USB-2000 spectrometer and cosine-corrected CC-3 collection lens. Raw data from the spec was interpolated to 1nm increments. This information was further analyzed for color percentage in a proprietary Excel program.

Temperatures were measured with a ‘laboratory grade’ mercury thermometer and a laser-sighted infrared temperature ‘gun’.

Comparison of the LED and metal halide PAR were made under similar conditions. Distance from the lamp(s) was 5 inches. LEDs were, of course, housed in AI’s luminaire.

The metal halide (an XM 250-watt 20,000K; burn time ~100 hours) used a polished aluminum parabolic reflector and was driven by a Coralife ballast. There was no ‘shield’ between the lamp and sensor. PAR measurements were taken every 1” across a black grid.

See the ‘Methods’ section for a description of spectral analyses protocols.

The AI luminaire houses 16 white LEDs. Generally, white light is produced by a LED generating blue light in combination with fluorescent phosphors. These phosphors absorb some of the blue radiation and fluoresce it as broad spectrum light, resulting in a ‘white’ light. See Figure 2 and 3. 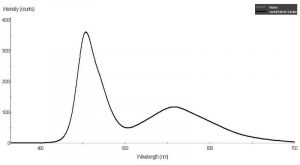 Figure 3. A visualization of the spectral qualities of the Seoul Semiconductor ‘white’ LED.

See Figures 4, 5 and 6 for analyses of the Seoul Semiconductor ‘blue’ LED. 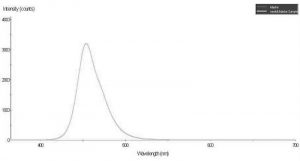 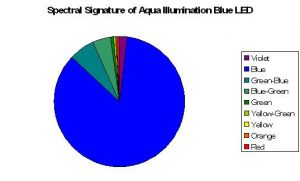 Figure 5. A visualization of the spectral qualities of the Seoul Semiconductor’s ‘royal blue’ LED.

Figure 6. A break-out of light produced by the blue LED.

See Figures 7 and 8 for analyses of the light produced by the AI LED array (all ‘day’ lamps at 100% power). 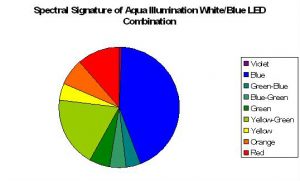 Figure 7. A break-out of light produced by the blue and white LED combination.

Figure 8. A visualization of the spectral qualities of Seoul Semiconductor’s ‘blue’ and ‘white’ LED combination.

Engineering advances in both LED and associated lens technologies have resulted in some rather amazing breakthroughs and these are becoming available to consumer markets. The LEDs used by AI are among the ‘brightest’ available. See Figures 9 and 10 for details. 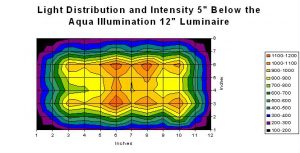 Figure 9. The light produced by the Aqua Illumination LED array is quantifiably ‘bright.’ Note the distance of the PAR sensor from the luminaire (5”) – holding the sensor closer to the luminaire saturated the sensor. In other words, the LEDs produced more light than the sensor could measure (1,999 µmol·m²·sec – the intensity of sunlight at noon on a cloudless day). 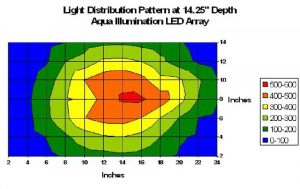 Figure 10. Light intensity you would see at a water depth of 14.25” in an aquarium. The luminaire is about 1” above the water surface (with the supplied legs removed).

How does the AI LED array’s light intensity compare to that of a ‘traditional’ light source (such as a high Kelvin metal halide lamp)? An XM 250-watt 20,000K metal halide’s light output (PAR) was compared to that of the AI LED luminaire (see ‘Methods’ for details). In a nutshell, the LED array out-performed the 250-watt metal halide. 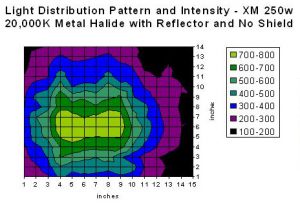 Figure 11. Light intensity (Photosynthetically Active Radiation, or PAR, reported in units of micromol photons per square meter per second) of a metal halide lamp. Compare these numbers to those in Figure 9.

Photosynthetically Usable Radiation (PUR) is an important, but not an ultimate, concept. PUR differs from PAR (Photosynthetically Active Radiation) in that PUR considers not just light intensity, but also the spectral composition of light. In order to estimate PUR, we have to consider which portions of the visible spectrum are actually absorbed by zooxanthellae. Fortunately, researchers have determined this, and call it an ‘action spectrum.’ An action spectrum describes the relative effectiveness of energy at different wavelengths in producing particular biochemical or biological responses (such as oxygen evolution, carbon uptake, electron transport rate, etc., during photosynthesis). Hence, or our purposes, we will consider PUR as those wavelengths falling between 400-550nm (absorption bandwidth of chlorophylls a, c², and peridinin) and ~620-700nm (red absorption bandwidth of chlorophylls a and c²). Figure 12 demonstrates the action spectrum
of zooxanthellae isolated from the stony coral Favia.

Using these ranges, 74.7% of PAR produced by the AI unit is actually PUR and is therefore light usable by zooxanthellae and plants. It should be noted that light not absorbed by photopigments and the coral animal is reflected and results in our visual perception of ‘color.’ I think most hobbyists will likely prefer a visually-pleasing light over a photosynthetically-efficient light (which would appear reddish-blue in color).

My point is that we, as hobbyists, shouldn’t get carried away with this concept and PUR is more of a factor in low-light (photosynthetically sub-saturating) intensities. 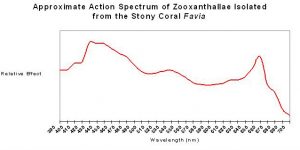 An in-depth discussion of PUR and its relation to photosynthesis under conditions of photosynthetically sub-saturating and saturating light intensities is well beyond the scope of this article. However, it does deserve attention and will be the subject of a future article.

Low power consumption is a strong selling point for LED applications and this unit is no exception. The 12” luminaire houses 24 LEDs for day lighting, and 8 LEDs for simulation of moonlight. At full power (all blue and white ‘day’ lamps at 100% output and 2 cooling fans operating) the wattage drawn is a remarkably low 88 watts. When only white LEDs are on (and 2 fans operating), power consumption is 63 watts.

The two cooling fans draw a total of only 6 watts.

For comparative purposes, a 250-watt metal halide and ballast 277 watts. In other words, the AI LED array outperforms this metal halide lamp and uses 68% less energy.

LED lamp longevity is known to be extraordinary and estimates generally run from 50,000 to 100,000 hours. Using the lower figure (50,000 hours) and a daily photoperiod of 12 hours, we can estimate the AI luminaire’s expected life to be about 11.4 years.

High temperature is an enemy of the reef aquarium – and LEDs, hence successful applications of semiconductor technology demand adequate heat dissipation. In addition, salt spray, ‘salt creep’, dirt and moisture entering any electrical fixture should be a concern; however, AI has engineered a rather unique fix to this potential problem.

Most luminaires’ cooling systems use fans to draw air across the lamp. While this strategy is effective, it does have disadvantages mentioned above. Two cooling fans (pulling 3 watts each) are sunk into an aluminum heat dissipater mounted on top of the luminaire. Heat rising from the LEDs migrates through these aluminum ‘fingers’ and heat is effectively removed by the fans’ cooling action. Potential problems are practically eliminated – the practically air-tight luminaire’s internal components are not subject to corrosive salt and moisture, and dust and dirt is kept away from the internal lenses.

Two fans (on the 12” unit) cool an external aluminum heat sink and are quite effective. See Figure 13 for the thermal signature of AI’s luminaire after 24 hours of continuous operation.

Heat transfer was estimated after operating the AI unit for 24 hours above a 29 gallon aquarium. After this time, the aquarium water was approximately 1ºF warmer than room temperature.

Figure 13. The operational temperature of Aqua Illumination’s LED array is low and heat transfer to the aquarium is not an issue. Room temperature during this experiment was 74ºF.

The AI luminaire is designed to be upgraded if desired. Their website advertises modular construction which enables expansion (length) of the unit, as well as potential upgrades to the LEDs. 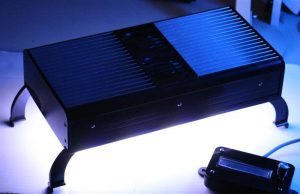 The overall finish and appearance of the luminaire is very good, just as you would expect from a high-end lighting system.

The LED array light output is quite bright and the light’s spectral quality is quite pleasing to my eye. There is just enough output in the upper spectrum to overcome the cold blueness associated with many high kelvin lamps. This warmer spectrum is excellent for showcasing yellow, orange and red specimens (fishes or corals) yet has enough blue to excite corals’ fluorescent pigments. Of course, the module is programmable and an infinite number of blue/white spectral combinations are available at the mere twist of a knob.

The controller is very easy to program. The menu and programmed is available via a single rotary knob. The ‘Manual’ settings are stored in non-volatile memory and allow use of a third-party timer, if desired. ‘Automatic’ settings allow use of a sunrise and sunset feature.

My only criticism of the AI 12” module is the orientation of the LED arrays within the luminaire (this is probably not an issue with larger, longer AI luminaires). Since each 12” module provides adequate light for every 24” of aquarium length (and ~18-19” width; see Figure 10), it makes sense to orientate the long axis of the luminaire parallel to the long axis of the aquarium. Fortunately, there is an easy solution – remove the luminaire’s four legs (easily done – they slide out) and provide two support strips (glass or stout acrylic) across the aquarium top (this applies to all-glass aquaria and should not be an issue with most acrylic aquaria).

It is only a matter of time before LED arrays replace the aging technologies of metal halide and fluorescent lamps. The advantages of LEDs are many – low power consumption, practically no in infrared or ultraviolet radiation transmitted to the aquarium, spectral tuning of LED combinations and so on.

With competition, the prices of these LED arrays will fall. For now, the initial purchase price will be an obstacle to some. But for discerning hobbyists looking for long-term savings and the ‘green’ thing to do, the AI LED luminaire is well worth considering. 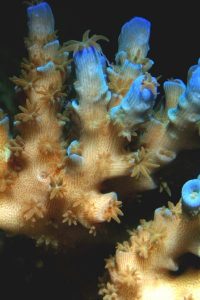 Figure 15. Who says you can’t keep SPS corals (such as this Acropora) healthy and growing under LEDs? This and many other corals are thriving under LEDs.

Any questions for me should be directed to RiddleLabs@aol.com.