Imagine a LED lamp, a giant LED lamp. A 30-watt LED some 2.5 inches (~6.4cm) in diameter and that’s what you’ve got with Blue Moon Aquatic’s new P30 LED pendant luminaire. The difference between this product and most other LED luminaires currently on the market is much more than cosmetic. Instead of the more traditional approach, where banks of 3mm LEDs are stuffed into a rectangular housing, Blue Moon Aquatics started off with a clean sheet of paper and designed the P30 from the ground up. The P30 is presently available in two configurations – either with or without an annular ‘Saturn ring’ consisting of 6 blue LEDs. The unit can be upgraded later with the ‘Saturn ring’ in just a couple of minutes if desired (the upgrade procedure involves removing a threaded plate and plugging in the blue LEDs. Simple, with no fuss or rewiring). 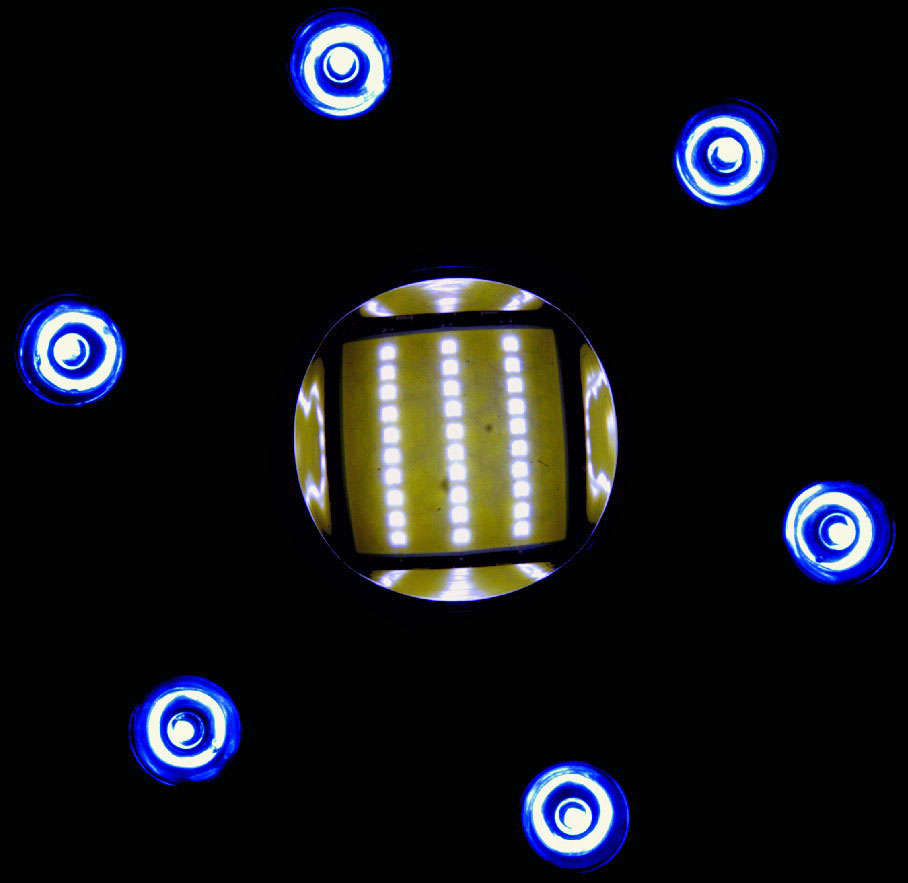 The P30 is designed to be a pendent luminaire and suspended from the ceiling above the aquarium. There are no moving parts, as no cooling fans are involved. Heat is dissipated through a multi-finned cylindrical aluminum heat sink.

Specifications are as follows: 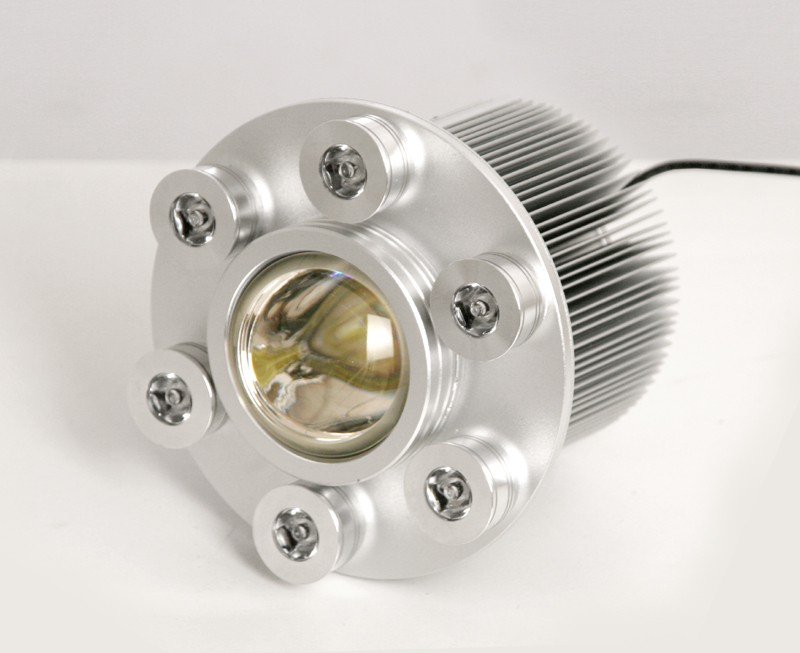 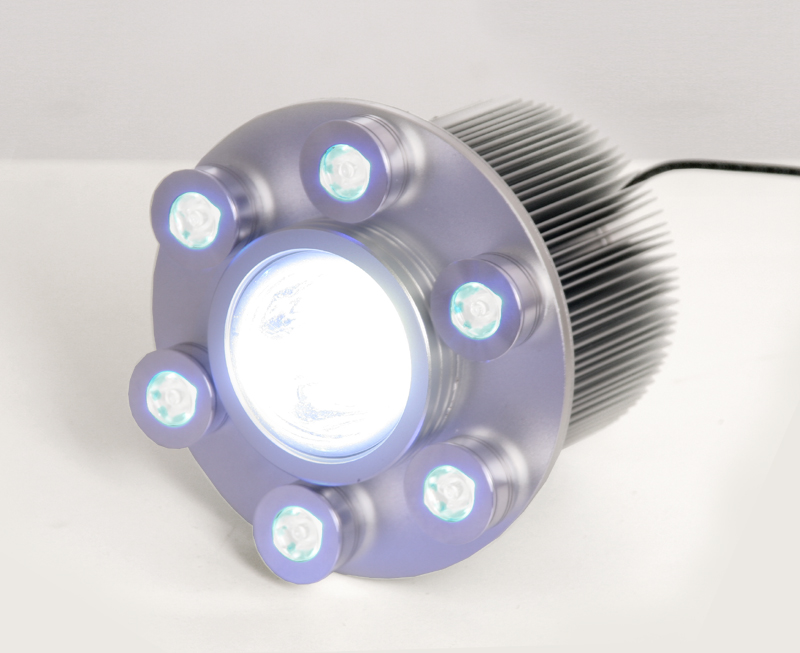 Spectral quality of light illuminating a planted freshwater aquarium or coral reef tank is extremely important since the aquarist wishes to promote photosynthesis. In general, aquatic environments are deficient in warmer wavelengths such as yellow, orange and red. There are studies suggesting too much red in lighting for a reef tank is a cause of bleaching, where corals lose their symbiotic algae (Symbiodinium species). While ratios of red to blue light wavelengths have yet to be determined, we should look for reef lighting that offers minimal red (just enough to satisfy the visual requirements of the viewer) and are skewed towards cooler light such as violet and blue.

Figure 1. Spectral Composition of P30 output when all LEDs are on.

Figure 2. This pie chart shows the breakout of light quality presented in Figure 1.

Figure 3. Spectral Composition of P30 output when only blue LEDs are on.

Figure 4. This pie chart shows the breakout of light quality presented in Figure 3.

Figure 5. Spectral Composition of P30 output when only white LEDs are on.

Figure 6. This pie chart shows the breakout of light quality presented in Figure 5.

Photosynthetically Active Radiation (PAR) is the portion of visible solar (or artificial) radiation that promotes photosynthesis. It is usually defined as those wavelengths between 400nm (violet) and 700nm (red). It is measured with a PAR or quantum meter and is reported in units called micromol per square meter per second (µmol·m²·sec) but older references may use the unit of microEinsteins per square meter per second (µE·m²·sec). Either way, the PAR meter reports the number of light particles (photons) falling on a surface of a given give over a given time period and is called Photosynthetic Photon Flux Density (PPFD). Sunlight, on a clear day at noon, is about 2,000 µmol·m²·sec but might be as high as 2,500 µmol·m²·sec (depending upon latitude and season).

Although light requirements vary between different plants and algae (including zooxanthellae), a good rule of thumb is to maintain at least 100 µmol·m²·sec. For those using a lux meter, see here for conversion factors for various lamps: www.advancedaquarist.com/2008/2/review

Light intensity falls as distance increases from the source. PAR was measured at various distances in air. Figures 7 through 11 demonstrate results. 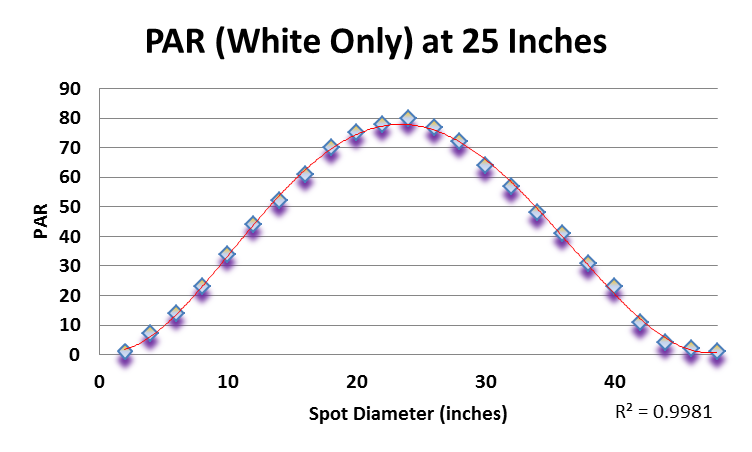 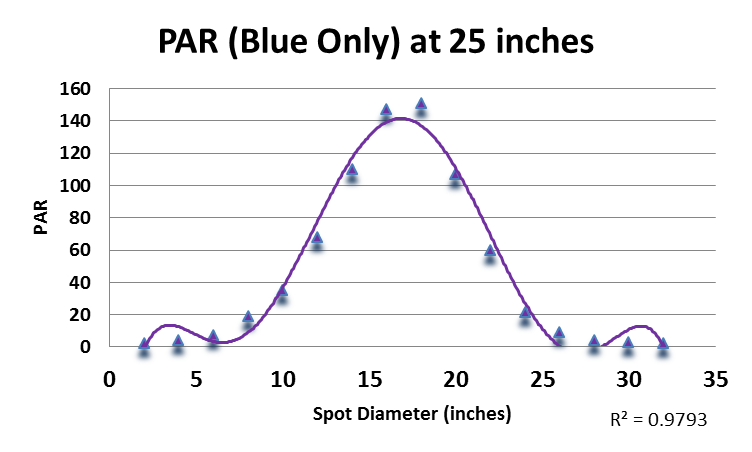 Figure 8. Blue LEDs deliver a maximum of about 150 µmol·m²·sec at a distance of 25 inches in air. 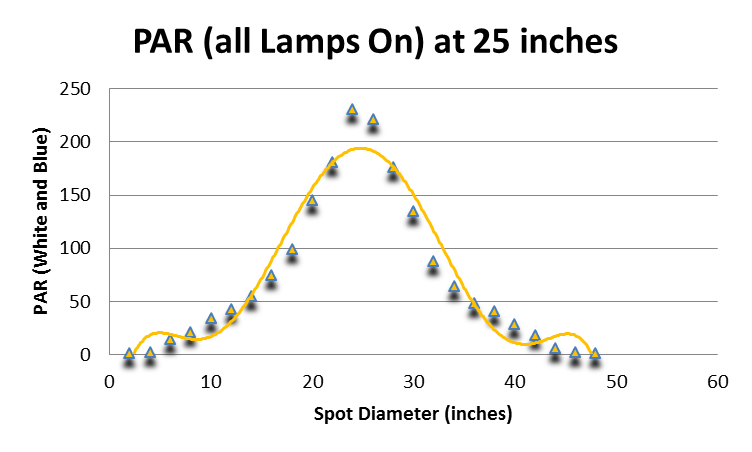 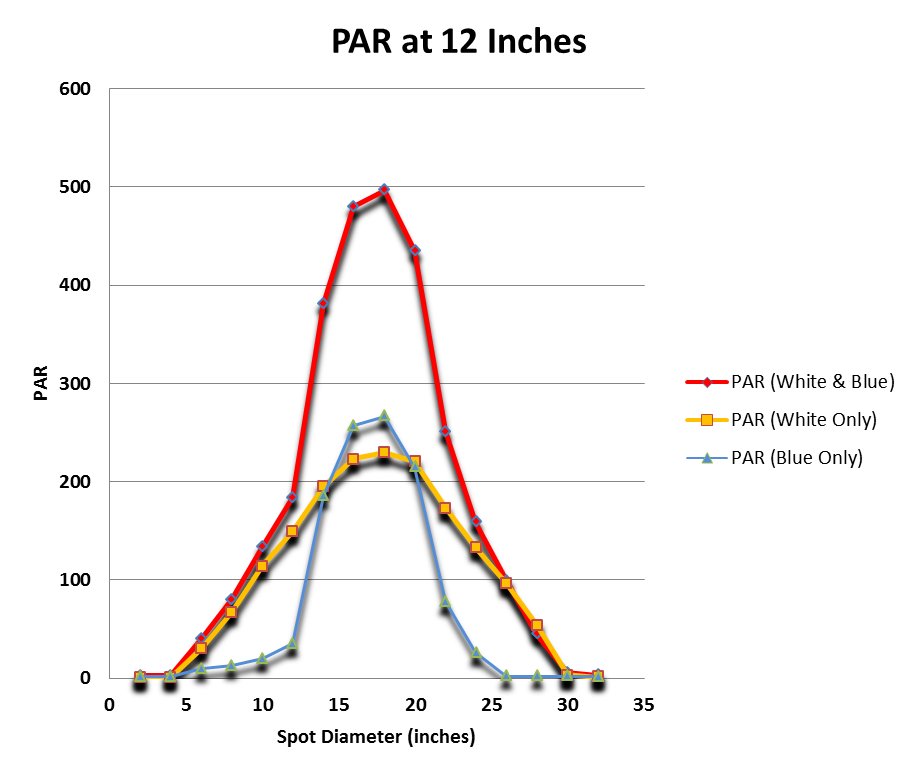 Figure 10. Light intensity of lamps at a distance of 12 inches. 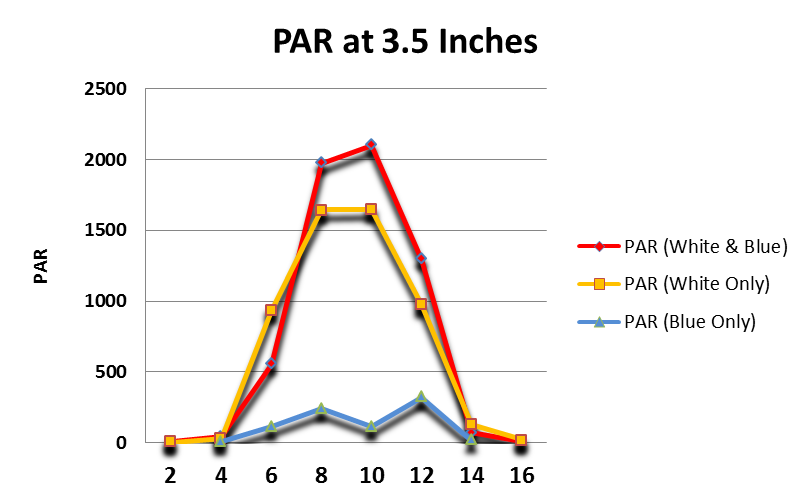 Figure 11. The maximum amount of light produced with all LEDs on is about that of maximum strength sunlight.

LEDs usually produce very little radiation unless specifically designed to do so. The LEDs used in the P30 luminaire do not produce any appreciable UVR. See Figure 12.

Many hobbyists mistakenly believe UVR is necessary in a reef tank in order to either promote production of fluorescent coral pigments or to induce fluorescence. UVR is almost always not required and the blue portion of these lamps spectra is sufficient to make corals glow.

How High Above the Aquarium?

The spectral quality of the P30 meets our requirements, and light intensity should be no issue. Placing the luminaire about 10 inches above the water’s surface should deliver about 500 µmol·m²·sec. See Figure 13 for further information. 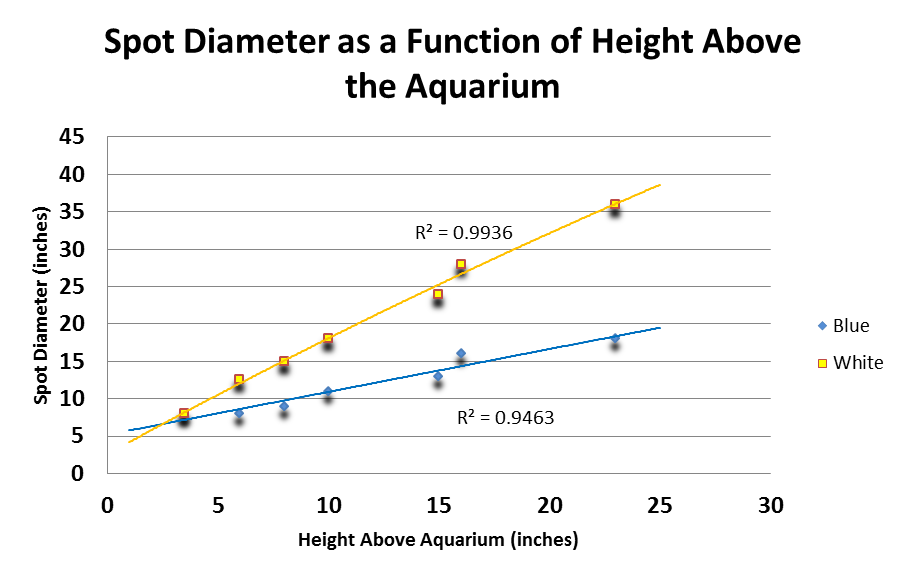 Figure 13. Illuminated area diameter as a function of height above the aquarium when all lamps (white and blue) are on.

Excessive heat is an enemy of the reef aquarium. While warmer water has less ability to hold dissolved oxygen, impacts pH values slightly, generally encourages higher biological activity and others, it is temperature tolerance of zooxanthellae that should most concern the hobbyist.

Figure 14 shows the relative amount of infrared radiation produced by the P30.

The P30 incorporates no cooling fan, and heat transfer is passively accomplished through a multi-vane heat sink. I was interested in recording the temperature of the P30’s aluminum housing over a period of time. See Figure 15. 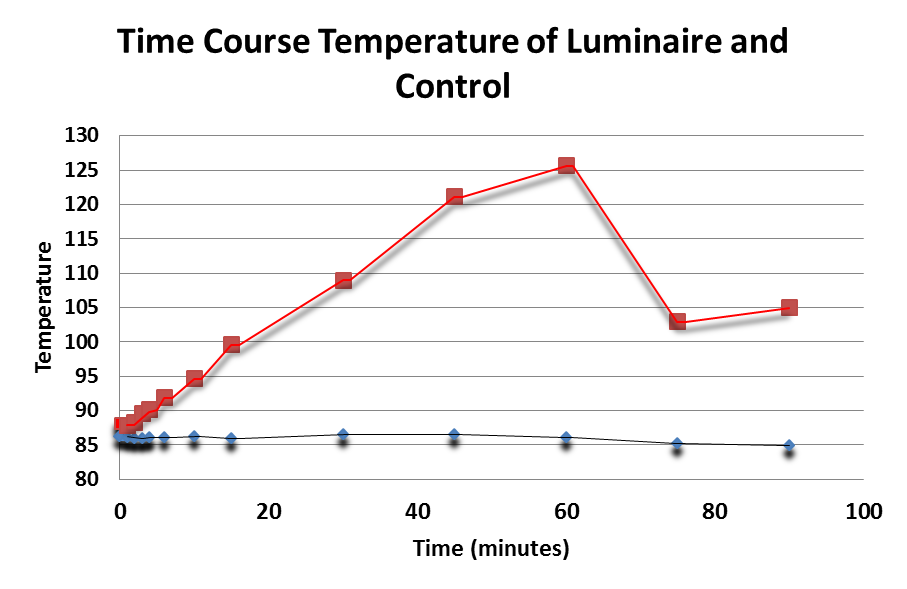 Figure 15. P30 luminaire (with Saturn ring) temperatures (red line) over the course of 90 minutes. A small (but separate) cooling fan (not supplied by Blue Moon) was turned on at the 60 minute mark aiding in heat transfer and resulting in lower operating temperatures. The blue line represents reference temperatures taken in the room during the course of observation.

As Figure 15 shows, the warmest part of the luminaire (the top) did not exceed about 125°F indicating this heat sink design is efficient. This temperature was significantly reduced when a small fan was used to aid in heat transfer.

For comparative purposes, operating temperatures of various aquarium lamps are shown in Table 4.

Ballasts are often overlooked as a potential heat source of aquaria. I scanned the surface of the P30’s ballast after an hour of operation and recorded a high temperature of 99.6° F. A reasonable temperature indeed, considering room temperature was ~85° F. However, it is probably a good idea to locate the ballast outside of the aquarium cabinet (if applicable). The generous electrical cord lengths should make this a relatively easy task. 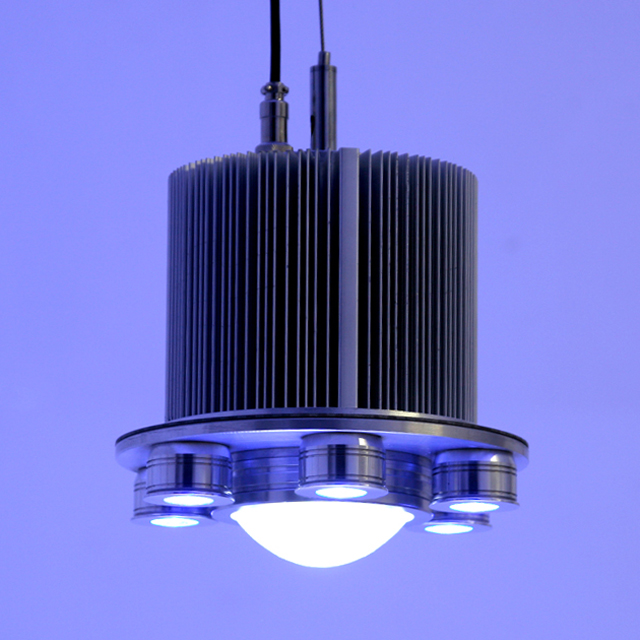 The light output of the Blue Moon Aquatics P30 is impressive, especially when equipped with the option 6-LED ‘Saturn ring’. PAR output by the P30 (with Saturn ring) approach (or in some cases exceed) that produced by many lower wattage metal halide lamps. What seemed impossible to many just a few years ago is now reality – this LED luminaire can complete with metal halides when used over coral reef aquaria of sizes commonly seen in homes. There are obvious benefits – reduced operating costs, low heat production and lamp longevity. An interesting heat sink has negated the need for a cooling fan (all too often the first item to fail in a warm, humid, and sometimes salty) environment. However, the use of a small cooling fan (such as those marketed to blow across the water’s surface and aid in evaporation in aquaria) can significantly reduce the operating temperature of the LEDs, or more correctly, the temperature of the aluminum housing. LEDs produce more light at cooler temperatures (at least the lower end of those seen surrounding aquaria housing corals and tropical fish).

Spectral quality will meet the needs of both freshwater and reef hobbyists. My opinion is this: Use the optional Saturn ring along with the P30 for marine fish and reef aquaria. The P30 without the Saturn ring should be fine for freshwater fish and planted tanks.

Since the P30 combined with Saturn ring utilizes a central ‘white’ light source surrounded by an annular ring of 6 blue lamps (both with optics of different light dispersion angles), the interesting possibility of spectral tuning by altering height of luminaire is possible.

I have used nothing but LED luminaires for the last few years and have been impressed by the rapid improvements and price reductions. LEDs are here to stay, and I predict will antiquate within a decade other lighting systems used over even the largest of aquaria (yes, I’m speaking of large public aquaria).

Specifically, I’ve had another Blue Moon Aquatics LED system in operation for over a year and report no problems with it. If that is any indication, I should get long, reliable service from the P30 luminaire.

Spectral qualities were determined through use of an Ocean Optics USB2000 fiber optic spectrometer. Raw data were exported to an Excel spreadsheet where corrected spectral information was generated with use of a proprietary program written by Dr. Charles Mazel.

Electrical consumption was measured by a Kill-A-Watt meter manufactured by P3 International.

Photosynthetically Active Radiation was determined with a LI-1400 quantum meter made by Li-Cor BioSciences.

Temperatures were measured with a non-contact infrared thermometer.

Questions? Comments? Please leave them in the Comments section below, or email me at RiddleLabs@aol.com.

The FTC requires us to inform you that the author was given the product gratis for review.