Product Review: Eductors For Water Motion In A Reef Tank

Today most reef keepers understand the importance of water motion. Adequate water motion may be as important as adequate lighting in maintaining a healthy reef tank. Creating realistic water motion, however, is more challenging than creating realistic lighting. Most of the options available to hobbyists represent significant trade-offs. 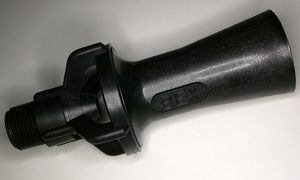 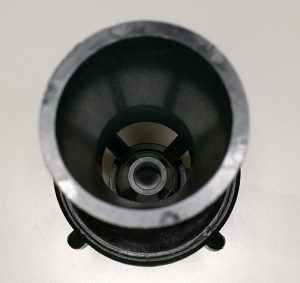 At first glance an eductor just looks like a flared nozzle (figure 1). Upon closer inspection, however, one discovers that there are large slots surrounding a narrow nozzle in the center of the eductor (figure 2). As water enters the eductor, it flows into a narrow section that increases the velocity of the water. As the water continues, it exits the narrow nozzle into a section with a much larger cross section. This expansion creates a pressure gradient that draws water through the surrounding slots into the stream. The process of drawing water from outside the eductor effectively increases the apparent flow from the pump over what a simple return would provide. If the process sounds familiar, it is. Venturi driven protein skimmers utilize the same principle to inject air into a stream of water. The only difference is that in the case of the eductor, the process draws water into the stream rather than air.

The claimed output of an eductor varies by the manufacturer. Some claim that it will generate six times the flow of a pump. The more conservative claims suggest that four times the flow is more likely. To reach these kinds of efficiencies, the pump feeding the eductor needs to be pressure rated. It needs to be able to generate flow against the back pressure of the narrow nozzle. Suitable pumps include the RLT versions of Iwaki pumps and the MDQ versions of Little Giant pumps.

To test the eductor, I mounted a ¾ inch eductor from Aquatic Ecosystems on the output of a Blueline 40HD, a pump slightly more powerful than an Iwaki 40RLT. The pump is rated at 790 gallons per hour (gph) at a height of four feet. Because of the construction of my tank, I mounted the pump above the water and rotated the impeller housing so that water from the pump flowed directly down into the tank. Threaded schedule 80 PVC fittings were used throughout.

I first measured flow through the pump with standard ¾ inch fittings. Using a flow meter I measured a velocity of 4.3 feet per second (fps) at the output of a horizontal elbow mounted just below the water’s surface. I then screwed the eductor onto the end of the elbow and measured flow again. Water velocity with the eductor measured 4.6 fps. Since the volume of water exiting a pump is a product of the water velocity times the cross-section of the flow, one can estimate the flow generated by the pump. The volume of water flowing through the ¾ inch elbow at a speed of 4.3 fps is 0.55 gps. If we assume that flow across the entire cross section of the eductor is constant, flow works out to be 1.9 gps for the eductor. This is about three and a half times the flow of the pump alone. To achieve this increase through the use of a larger pump, one would have to use the equivalent of an Iwaki 55RLT or larger. 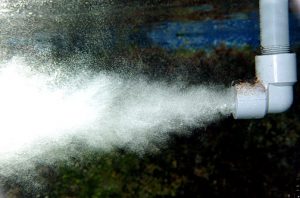 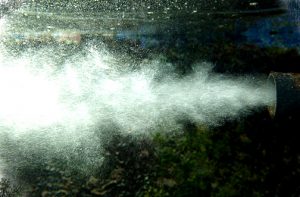 Increasing flow is one benefit of an eductor, but a second benefit is equally valuable. An eductor increases the volume of water flowing into the tank, without significantly increasing the velocity of the water. In the case above, volume increased 245% while velocity increased only 7%. The flare at the end of eductor broadens the wave front making the current less traumatic for corals. The impact of a broader wave front is apparent if one adds air bubbles to the water flowing from the pump. In figure three water is flowing directly out of the ¾ inch fitting and the bubbles flow in a narrow stream. Figure four shows the effect of the eductor. The bubbles are expanding into a much broader stream as they exit the eductor.

The eductors currently available are fairly large. The smallest version, the ¾ inch model is six inches long. Fortunately manufacturers are working on smaller units that will work in smaller tanks. My eductor has been running several months now without a problem. The broad wave front generated by the wide flare enables corals to grow within a few inches of the eductor. My eductor runs continuously and no animals have wandered into the slots, but potential users should keep in mind that a significant amount of water is drawn through the radial slots. The velocity of this water is fairly low because of the large surface area, but one cannot rule out snails and the like getting on the eductor; Captive animals seem to have an odd habit of wandering into dangerous situations. The safest course of action is to do as I do and run the pump continuously. Centrifugal pumps aren’t really designed for frequent cycling and there are better means to randomize water flow in the reef tank.