I wonder how many times this conversion has occurred?

“Have you seen this month’s power bill? It’s outrageous! It’s that @#*! reef tank of yours!”

Probably more times than I can imagine.

Reef keeping has never been known to be particularly friendly to the bank account, though many of the original tanks weren’t as power-hungry as those of today. It has been over two decades since the European style reef aquarium (the ‘mini-reef’) gained popularity in the North America. It might come as a surprise to those who weren’t in the hobby at the time, but some of the earliest advisories from Europe advocated use of standard 40-watt fluorescent lamps, though use of metal halide lamps was considered mandatory for some coral species. And so it went. Standard fluorescent lamps gave way to very high output (VHO) fluorescent lamps, and a ‘horsepower’ race began with metal halides. By the late 1990’s we were experimenting with microwave-driven sulfur lamps that produced at least 20,000 µmol·m²·sec (at least a magnitude greater than the brightest natural sunlight!). Hard core hobbyists – especially the SPS keepers – were trying 1,000 watt lamps over relatively small home
aquaria.

Today, the pendulum is swinging the other way as we’re realizing that we really don’t have to blast captive corals with copious amounts of light. In fact, experienced hobbyists can often keep SPS coral alive and healthy while using – gasp! – Standard 40-watt fluorescent lamps. It seems as though we’ve come full circle.

Even with this realization, reef aquaria can be a major consumer of electrical power within a household.

With that said, this month’s Product Review might not seem unusual. Although it doesn’t involve a device that is specifically and directly aquarium-related, its importance should not be underrated since electrical costs are usually a significant portion of routine reef tank operational costs. This device, the Kill A Watt Electrical Usage Monitor, made by P3 International, is one that has the potential of saving you some of your hard-earned money. As a practical matter, use and prudent implementation of power-saving measures based on results obtained with the Kill A Watt meter could result in substantial savings. In the grand scheme of things, these savings combined with the possibility of reducing greenhouse gases is a win-win situation.

This device is relatively inexpensive and is certainly within the budget of most reef-keepers and fish clubs. It retails for about $30.00. 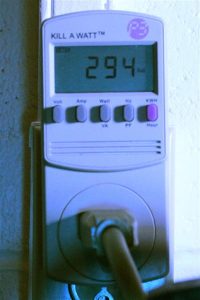 Abilities of the Kill A Watt Meter – Terms and Definitions

P3’s Kill A Watt meter can monitor these parameters:

The particular model reviewed is P4400. It can measure Volts (up to 125 VAC), Amps (up to 15A), watts (maximum 1,875w – or a little over 2 horsepower, if we use the formula Watts/746= Hp). It an also monitor Frequency (in Hertz), Volt Amps (VA) and can calculate kilowatt-hours (kWh). Use of this meter is simple – plug the Kill A Watt monitor into a grounded outlet and then plug the appliance (powerhead, chiller, etc.) into the monitor. It accepts 2-prong and 3-prong grounded electrical plugs.

The Kill A Watt meter is for household use and is not intended for use with ‘non-plug’ electrical devices often used in industrial applications where high voltage is used in conjunction with relays and switches (use a multi-meter for that purpose, such as those made by Fluke™ and others).

The Kill A Watt meter can take instantaneous readings of wattage. This is a quick and easy way to confirm power draw by devices that never stop running (such as return pumps, powerheads, etc.). Total power consumption can be easily calculated using this formula: watts X 24 hours per day divided by 1,000 = kWh.

Some devices cycle through on and off periods. Good examples of these items include refrigerators, window air conditioning units, chillers, heaters, powerheads controlled by wavemakers, etc. In these cases, it is best to use the Kill A Watt’s kilowatt-hour feature. Simply plug the device into the meter, press the pink KWH button, and return 24-hours later for a display of total power consumption per day.

Electrical thieves are those items that even when turned off are in reality still drawing current. In reality, many items within our homes steal power merely for our convenience of avoiding ‘warm up’ time. Electrical thieves can include computer printers, back-up power supplies (UPS), televisions and many other devices. See Table one for a listing of power consumption by various devices.

Although the Kill A Watt meter makes monitoring of power usage very easy, we don’t necessarily need the device in order to put a major dent in our electrical bill.

Successful energy-reduction measures are more often a matter of small changes as opposed to ‘hitting a home run’. These relatively minor things can be cumulative in nature and make a major difference in your monthly utility bills.

Things You Can Do to Your Aquarium

Of course there are many other things you can do to put a cap on your electrical consumption. Here are a few ideas for weekend projects that can begin to pay for themselves immediately:

Generally, water heaters are the major consumer of non-aquaria related power consumption. Check the thermostat setting on the heater – it’s usually set for 140ºF (60ºC). Turn it down to 120ºF (~49ºC). Install a timer on your electric water heater. Insulate the water heater with an insulation jacket. Insulate pipes carrying hot water (pipe insulation jackets are available in 4 foots lengths at most hardware stores and are quick and easy to install). Consider solar water heating (contact your local electricity provider for the possibility of an energy audit to see if this is feasible in your area).

Reduce your consumption of hot water by replacing your older shower head with a newer low-flow device. In a recent test, water-guzzling shower heads were exchanged for low-flow heads in an apartment complex, and not one person complained of the reduced flow!

When is the last time you checked your fridge’s temperature? Generally, recommended temperature is 38ºF to 40ºF (~3ºC to 4Cº) for the refrigerated section and 0ºF (-17ºC) for the freezer. Use a refrigerator thermometer and check it weekly. Refrigerators/freezers require different settings in summer and winter. Refrigerator/freezer thermometers are available at most department stores for $5-$6.

Check the coils (usually on the back of a refrigerator) and clean them often for best heat exchange.

Keep the air passages clear in your refrigerator. A packed fridge can have poor airflow and prevent the thermostat from accurately controlling temperature (this is often noted when certain items freeze while others do not).

If your fridge is old, check the integrity of the door gaskets by placing a dollar bill on the gasket and then closing the door. Replace the gasket if the bill is not held in place or is easily pulled from between the gaskets.

Look for the Energy Star rating when purchasing new appliances. If these aren’t available, pay close attention to the energy efficiency ratings listed on the SEER rating on the yellow label. SEER stands for Seasonal Energy Efficiency Ratio. The higher the SEER rating, the more efficient the appliance.

Run only full loads and use cold water or warm water settings whenever possible.

Older clothes dryers can be energy hogs. Run full loads for the minimum amount of time (you might be surprised how fast clothes can dry). Keep the lint trap clean. If you’ve got time, use a clothes line and let the sun dry your clothes.

Some dish washers offer an ‘Energy Saver’ option on the dial. This usually involves letting the dishes air dry. Run only full loads. Are the hot water lines insulated?

Many of the newer window air conditioning units have an energy-saver setting. Use it. Make sure the aluminum heat exchanger fins are kept clean, as well as the air filters. Central (whole-house) AC units’ heat exchanger fins should also be washed periodically using a water spray nozzle.

Incandescent lamps are almost history – if you use them for interior lighting, replace them now with the small spiral compact fluorescent lamps. These use much less energy and don’t operate at high temperatures, thus lightening the load on your air conditioner.

Many of us will turn a light on and leave it on even if we don’t need it. The same goes for TVs. Get in the habit of turning lights and appliances off when not needed.

These temporary openings in our homes should be just that and not allow permanent openings – even tiny ones – for heat/cooling losses! Make sure your windows are caulked and insulation strips around doors are in good shape. Consider installing storm doors and storm windows for added insulation.

Some of the newer window-tinting films have surfaces that reflect infrared radiation. In addition, these often block ultraviolet radiation that can cause furniture and carpeting to fade. Window tinting is especially desirable in areas with warmer climates.

This one is a no-brainer. Make sure you’ve got adequate insulation in the attic and crawl space. If insulating the attic is a DIY job, make sure you don’t cover any vents that allow air circulation.

Plant a Tree or Two

If you live in a warm environment, consider planting a tree or two in a strategic spots around your house. The shade keeps a portion of your house exterior cool, and the tree can absorb up to 25 pounds of carbon dioxide a year.

The Big Island of Hawaii has some of the highest electricity costs in the nation, due to it being produced by diesel-powered generators. With costs approaching 40 cents per kilowatt-hour, I was forced to do everything I could to conserve energy. This included many of the items listed above, and I am glad to say that I’ve seen the power bill drop over 33% even while generation and consumer costs are rising.

This power-shaving game can get rather addictive once we’re motivated by seeing our power utility bill drop month-by-month.

Has the irony escaped everyone that our keeping of artificial reefs may be contributing, even if in a small way, to the destruction of natural reefs? As responsible stewards of the environment, we really should try to conserve. No matter what your motivation – concerns about global warming, lessening dependency on foreign oil supplies, budgetary reasons – conservation pays.