A great deal of angst, concern, and confusion has been created by recent reports that the orientation of the “nipple” of a metal halide can have a significant impact on the performance of a metal halide bulb. Significant declines in intensity, apparent color shifts, and even the failure to light have been attributed to the position of the nipple. Unfortunately, these reports have been based on anecdotal observation and until now not investigated through systematic testing. In an effort to resolve the many questions regarding the relationship between nipple orientation and metal halide bulb performance, I completed a series of tests to evaluate several assertions made regarding bulb orientation.

Measuring the impact of nipple location is not a simple task. At the close distances that hobbyists typically place their bulbs over a reef tank, a small change in distance can have a significant impact on intensity. To draw valid conclusions regarding variations in intensity, distances between the bulb and light sensor need to maintained within a fraction of an inch. Maintaining these tolerances while measuring light intensity in 360 degrees cannot be done by hand. Consequently I developed a experimental design that makes use of equipment normally used in professional panoramic photography. The key component consists of a tripod with a rotating head calibrated in degrees with three geared controls that enable one to make fine adjustments in the X, Y, and Z axes. Using these controls, I was able to place the long axis of the metal halide bulb in the exact center of a rotating turntable enabling me to maintain a constant distance between the bulb and the sensor as it rotates. With this arrangement, the distance between bulb and sensor could be held to less than one-sixteenth of an inch (less than 3mm) while rotating the bulb through 360 degrees. A Li-Cor 2pi quantum sensor connected to a Li-Cor L1000 data logger was mounted 24 inches from the bulb to approximate light levels at the bottom of a typical reef tank and. The center of the sensor was placed in line with the nipple, which is generally at the center of the inner envelope. I recorded photosynthetically active radiation (PAR) every 45 degrees through 360 degrees of rotation with the data logger averaging 60 separate measurements at each point. To evaluate color temperature, I used a Gossen Color-Pro color meter.

For reasons that will be explained below, the glowing arc of each metal halide was photographed through a high density “solar filter” normally used in astronomy to photograph the sun. The majority of measurements were taken with the bulb in a base down vertical position. This is because it proved to be the most reliable replicable set up. However, measurements and arc photographs were also taken with bulbs in the horizontal position. To do this the sensor was left in the same position while the bulb was switched to a horizontal position and rotated as if on a rotisserie. Since the bulb was continually lighted during the rotation and measurement, one concern was that measurements might vary if the bulbs were fired in different orientations. To test this possibility, a second set of measurements and photographs were taken with the bulbs switched off between reorientations. No differences were observed.

A total of four different 400 watt bulbs were evaluated, two Iwasaki bulbs, a German 10,000 degree Kelvin bulb, and a Radium 20,000 degree Kelvin bulb, also from Germany. I tested the Iwasaki MT400DL/BUD version as well as the MT400DL/BH version. The difference between the two versions is that the BUD bulb is designed for mounting in a vertical or pendant arrangement. The BH version is designed for horizontal mounting. The ballast used for PAR measurements was a standard 400 watt core and coil metal halide ballast, although I also photographed the 10,000 and 20,000 degree bulbs using a 400 watt HQI ballast. 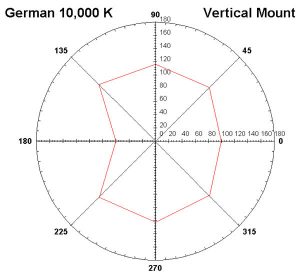 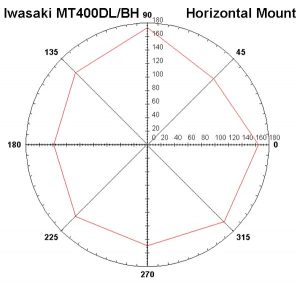 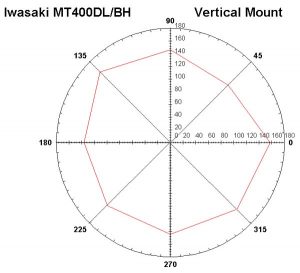 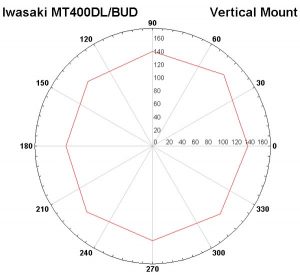 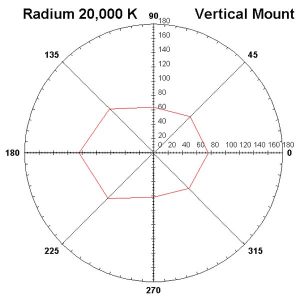 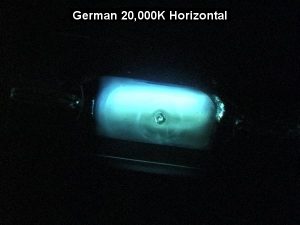 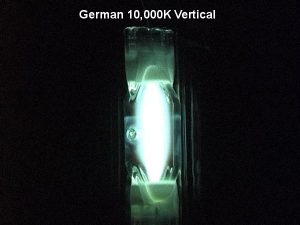 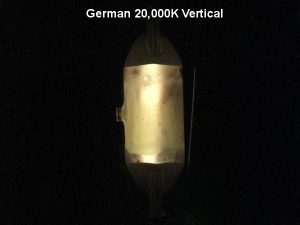 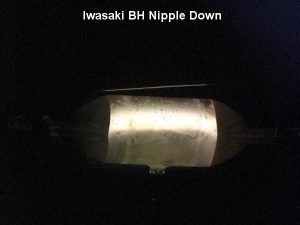 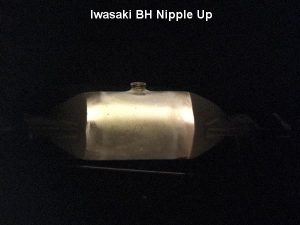 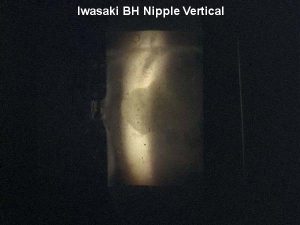 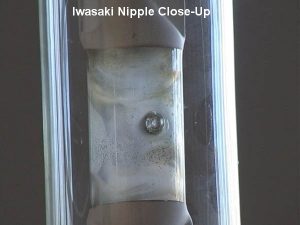 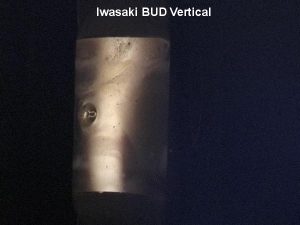 The results make it clear that one cannot state categorically that light intensity is lower on the side of the bulb with the nipple. Quite the contrary, on the whole, light intensity tends to be greater on the side with the nipple. Much more is at work here than simply nipple orientation. An examination of the inner envelope and glowing arc within the envelope explains the differences. The orientation of the arc within the inner envelope has a much greater impact on light intensity than the glass nipple. In a vertical orientation, the Iwasaki bulb arc arches towards the nipple and consequently produces more light on the side with the nipple. This is true for both the BUD and BH versions, but is more pronounced with the BH version burned in a vertical orientation. In contrast, the German 20,000 degree Kelvin bulb arc arches away from the nipple and therefore produces greater light opposite the nipple. The 10,000 degree Kelvin bulb produces the most uniform and centered arc of the bulbs evaluated. However, the arc tends to be diffused and somewhat oblong in shape, not cylindrical like the other bulbs and produces significantly less light along the narrow portion of the arc and greater light on the broad sides of the arc.

Of the bulbs tested, the most uniform light distribution measured is produced by the Iwasaki BH bulb operated horizontally. This is somewhat misleading, however. The two photographs of the Iwasaki bulb operated horizontally show that the bulb arc follows along the top of the envelope regardless of nipple orientation. Since the sensor was in a fixed position and the bulb rotated, the position of the arc relative to the sensor remained constant. This would have been true regardless of the placement of the sensor. However, had the bulb remained fixed and the sensor rotated, light levels would have also varied in the horizontal position, but probably less so than they did in the vertical orientation.

The arch of the arc towards the top of the envelope means that when horizontally mounted over a tank, the greatest intensity of light will be directed into the fixture’s reflector instead of directly into the tank. At first glance this may seem to be inefficient use of the brightest light, but quite the contrary, this is fortuitous. Most hobbyists want to light as much of the tank as possible. A metal halide bulb is a quasi-point source of light and therefore alone creates a great deal of light directly below the bulb and much less light further away from the bulb. The reflector effectively spreads the light creating more even light across the tank than the bulb alone could create. Projecting the greatest amount of light into the reflector better evens out the light field.

How does one explain the anecdotal observations such as bulbs failing to fire if the nipple is mis-positioned? First, a reef tank is a hostile environment for any electrical device, particularly one that draws a great deal of current. Corrosion can build up in the contacts and sockets of metal halide lighting. In the course of trying to reorient the nipple of a metal halide bulb, one must remove the bulb and by doing so may remove the corrosion that was preventing the bulb from firing. I have found that with an older metal halide bulb, simply unscrewing and screwing the bulb back in will enable the bulb to fire. Those who have observed a color shift when changing the orientation of the nipple may also be inadvertently cleaning the corrosion from the bulb contacts while attempting to reorient the bulb. There is a very small color temperature shift at different points around the bulb. It is possible that the small color temperature difference is more apparent when the bulb is placed next to a second bulb with a different color temperature. This would be most apparent as a bulb ages and shifts in color. In these experiments I was unable to significantly shift the color temperature of any bulb by rotating the position, but I have observed color shifts in older unstable metal halide bulbs where the arc periodically changes position. One should realize, however, that the nipple has nothing to do with the position of the arc within the envelope, and that the nipple has nothing to do with color shift.

My conclusion is that the concern over nipple orientation is misplaced. The nipple itself has little to do with the performance of metal halide bulbs including intensity or color temperature. Each metal halide design creates a different arc of light within the envelope and it is this characteristic that creates asymmetrical light fields. While light intensity varies somewhat with the orientation of the bulb, the use of efficient reflectors can minimize any asymmetry. The orientation of a metal halide nipple has far less impact on light over a reef tank than the choice of bulb, quality of reflectors, and keeping the bulb free of salt deposits and dirt. It is also important for Iwasaki bulb users to choose the proper bulb for their application, the BUD version for pendant users and the BH version for horizontal mounting.

Note: When it comes to the apparent difference with the 20K arc colors these differences might be interpreted as caused by the glass nipple, but in fact that difference resulted because I had to photograph the 20K vertical arc through welder’s glass, because the Solar filter made the photograph too dim.

One final note. One should never attempt to look into a lighted metal halide bulb without proper eye protection. All the cautions regarding the viewing of solar eclipses apply to viewing metal halide bulbs as well. Using welder’s glass is the minimum protection that one should use and solar filters sold by astronomy supply stores are an even safer choice.