“Nipple Nonsense,” an article I wrote for the first issue of Advanced Aquarist was an attempt to systematically examine a discussion topic that had recently made the rounds of on-line discussion groups. It explored the notion that the position of the nipple, the small piece of glass on the inner envelope that remains when the envelope is sealed, makes a difference in the performance of single ended metal halide bulbs. The article produced quite a bit of discussion. Numerous individuals came forward with logical explanations for why the nipple orientation of a metal halide bulb does matter. Several people took me to task for what they perceived to be flaws in my methodology. A handful of hobbyists came forward to say that they themselves had experienced bulbs changing color just by virtue of reorienting the nipple. Given the interest in the subject, the editor of Advanced Aquarist decided that I should look a little more closely at the phenomenon. The following report is based on additional work completed after the publication of the first report. Readers unfamiliar with the controversy should first read Part 1 (Jan 2002 issue). 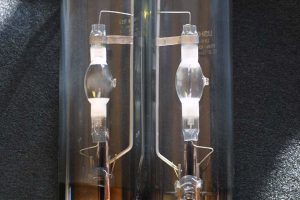 Most of the hobbyists reporting problems use single ended German 10,000 K bulbs in the 175 watt or 400 watt size. There are a number of bulbs referred to as “German 10K” so one uncertainty is whether everyone reporting a difference is using the same bulbs. I decided to examine the most common German 10,000 K bulbs, the Aqualine Buschke and Ushio bulbs. (AB has distributed different 175 watt bulbs over the years. I examined only the AB bulb that is physically similar to the Ushio brand bulb.) For many years hobbyists from around the country have given me used bulbs to evaluate so I had several bulbs of varying burn hours to test. These bulbs have been used on different ballasts by different hobbyists, and the hours burned are estimates provided by the hobbyists, but testing a cross-section of used bulbs offered the best chance of reproducing the experiences of those reporting a problem. To compare used bulbs to a new bulb, new Ushio bulbs were seasoned according to IES protocol and also evaluated.

Before proceeding it should be pointed out that this second round of testing differed from the testing for the first article and was specifically designed to better recreate the conditions under which hobbyists reported a change in apparent color of the light generated by the bulbs. In the first report the bulbs were held steady and the sensors moved. For these additional tests the sensor was kept below the bulb (where the tank would be) and the bulb rotated. Two sets of measurements were taken, one set with the nipple pointing up away from the sensors and a second set with the nipple pointing down towards the sensors. The bulbs were mounted in a bare horizontal free-standing socket with no reflector well away from any reflecting materials. The socket could be rotated so that the bulbs could be reoriented with a minimum of effort. Ambient light level in the room was checked between tests and at no time exceeded 1 uE/m^2/sec during testing. Each bulb was monitored while it warmed until it had stabilized as indicated by a steady PAR reading, and only then were final measurements taken. After each bulb was tested it was allowed to cool to room temperature in the same position. The bulb was then removed and replaced with the next bulb to be evaluated. All bulbs were tested in one orientation and then the sequence was repeated in the other orientation. The 175 watt bulbs were tested with an IceCap electronic ballast optimized for German bulbs. The 400 watt bulbs were tested with a PFO HQI ballast. The sensor was rigidly mounted in a frame placed below the bulb and the distance between sensor and bulb was set at 18 inches. While my primary interest was in color temperature, intensity or PAR was also measured. Spectral measurements were also taken (data not shown).

Table one below shows intensity and color temperature for each 175 watt bulb in each orientation. The bulbs are designated by the hours reportedly burned. The construction column refers to whether the bulb has a support wire running along the envelope on the same side as the nipple (designated with an “s”) or a support wire on the opposite side of the envelope. These are designated with an “o”. 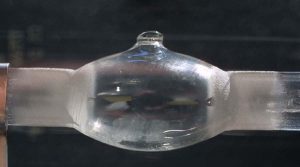 A bulb with just a few hours on it has a nearly clear inner envelope.

I have fewer samples of 400 watt German 10,000 K bulbs. Three were evaluated, two used and one seasoned new bulb. Table 2 shows the results. 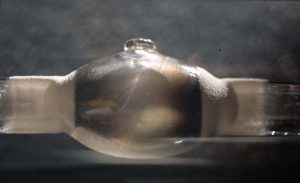 After several months of use, deposits build up inside the envelope reducing intensity.

There are hobbyists that are convinced that orientation matters and insist that they have observed the effect themselves. We also have hobbyists that are equally convinced that regardless of their bulbs’ orientation they produce the same color of light. Given the number of variables involved in lighting including the type of bulb, the age of the bulb, the ballast, wiring, and the hostile environment of a reef tank, both groups are probably correct. Under certain sets of circumstances it might be possible for some metal halide bulbs to appear yellow. Furthermore, reorienting the bulb may change the color of the light. However, with the data gathered so far, it is difficult if not impossible to predict under what circumstances and conditions this might occur let alone determine whether reorienting the bulb
will solve the problem.

The issue of light intensity asymmetry is an equally thorny issue. Part one demonstrated that metal halide bulbs tend to produce higher intensity above the bulb than below it. These latest tests measuring intensity only below the bulb show that some bulbs produce considerably greater intensity in one orientation than the other. With some bulbs these asymmetries may be ameliorated by the design of the bulb and the orientation of it. The Iwasaki bulbs evaluated in part one showed less asymmetry than the German bulbs evaluated here. This suggests that it may be difficult to predictably manipulate the light intensity field by reorienting the bulb unless the specific bulb is evaluated. And there remains the question of whether we would want more light reflected into the reflector or more light directed directly into the tank even if we knew the specific asymmetry of a bulb. This is a decision that each hobbyist needs to make. As I stated in the conclusion of part one, given the quasi-point source nature of metal halide bulbs, it may be better to orient bulbs with asymmetrical light fields so that more light is directed into the reflector. This may create a more even light field in the tank and reduce the possibility of light “hot spots” directly below the lamps.