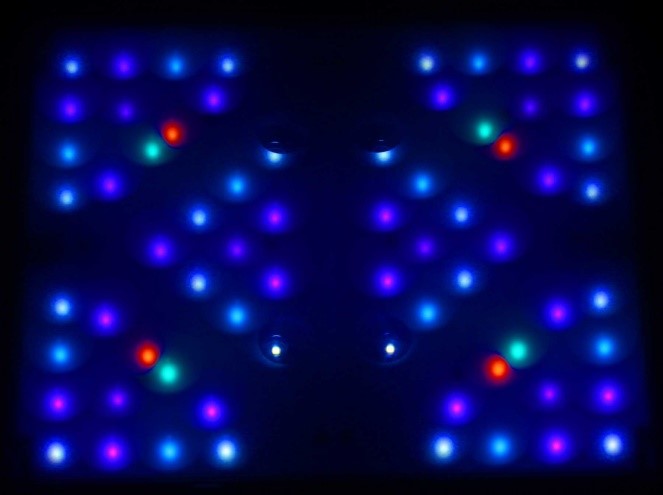 It has been almost 15 years since PFO offered the first commercially available LED luminaire for the aquarium market. These were wildly controversial at that time but LED luminaires are now generally accepted as the light of choice. Since that initial offering, a plethora of units have become available. This time, we’ll take a look at new comer to the North American market, the Philips CoralCare Gen 2 light.

It is not the intent of this article to describe any light as being ‘best’ – there are simply too many variables involved in making this determination, including, but not limited to purchase price, spectral quality, programming options, light intensity, warranty, inclusion of mounting hardware, and so on.

To start, we’ll examine the number of LEDs and their spectral qualities.

The CoralCare luminaire houses 68 LEDs, ranging from violet (with some spillover into the UV-A range) to white. There are two programmable channels for spectral quality and intensity. Channel 1 consists of 34 LEDs: Four amber, four cyan, twenty white (6500K) and six Royal Blues. Channel 2 has these: Six violet peaking at 415nm (with modest spillover into the UV-A range), twelve Royal Blues (445nm) and 16 blue LEDs peaking at 470nm. Hence, the light can be programmed to appear as violet/blue to a warm white. All LEDs are made by Lumileds.

An Important Note on the following measurements. Due to proximity of LEDs, diffusion by the frosted glass lens, and programming options, the following charts and graphs should not be considered as absolute. Instead, they confirm peak radiation outputs of individual LEDs, but more importantly, demonstrate color mixing at the lens.

There are 6 violet LEDs with peak output at 423nm and are made by Lumileds. 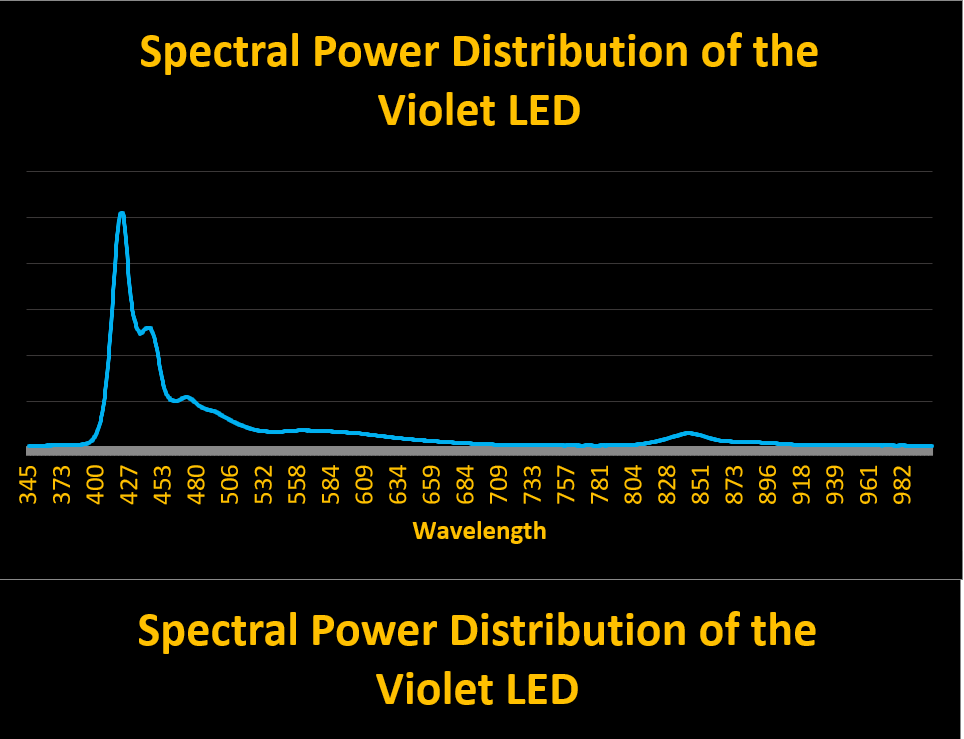 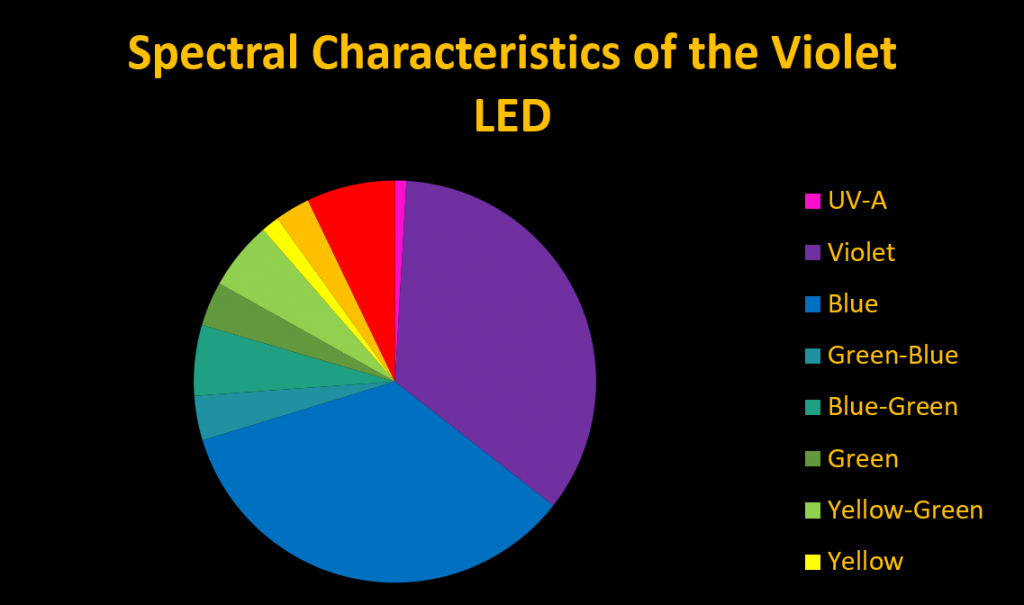 Figure 2. Mostly violet with a little spillover into the UV-A range. Note color mixing from adjacent LEDs is occurring at the glass cover.

There are 16 Royal Blue LEDS with peak output at about 445nm, and are advertised to be made by Lumileds. 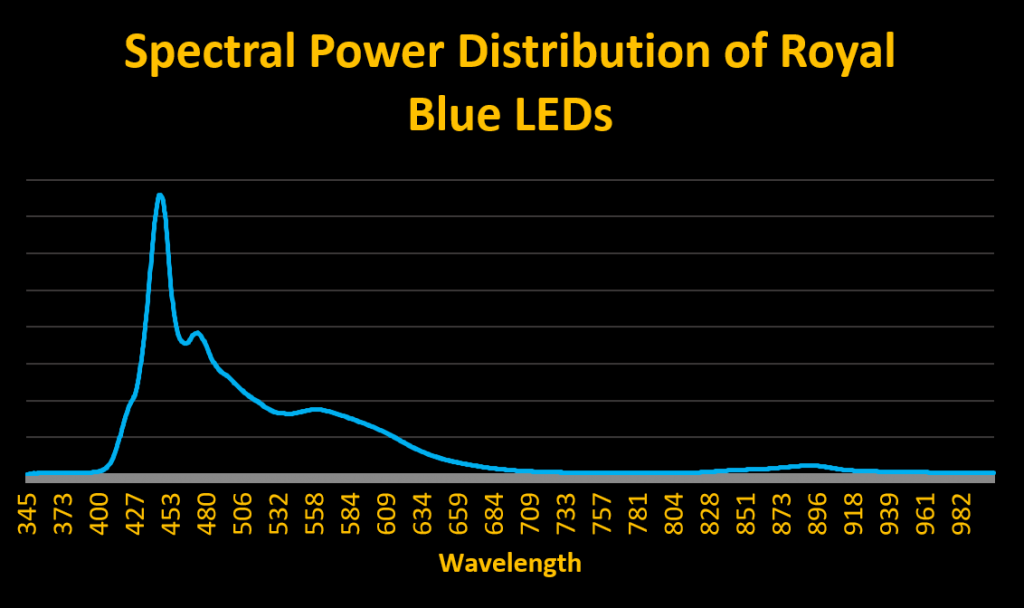 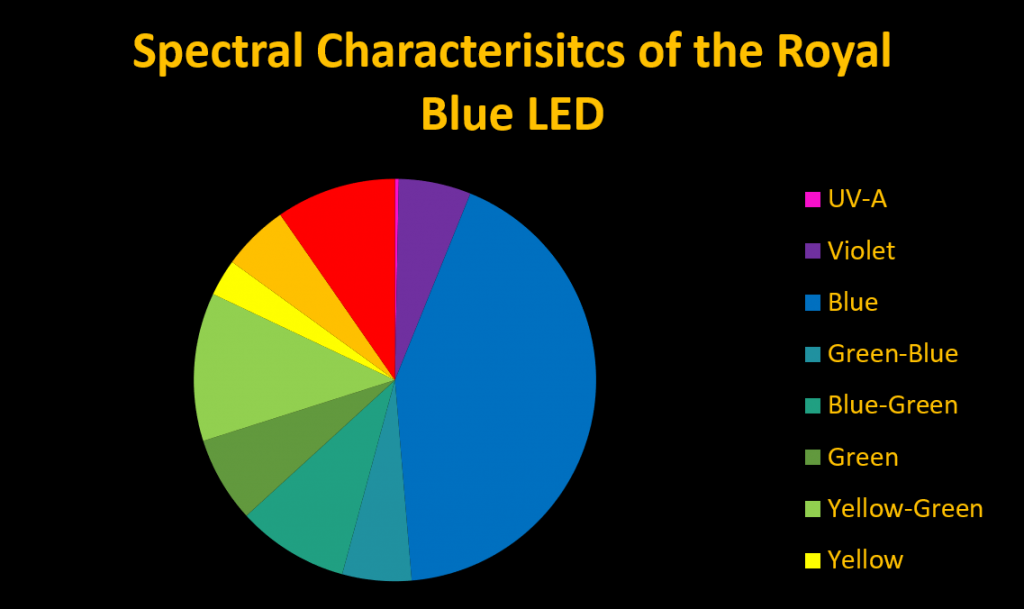 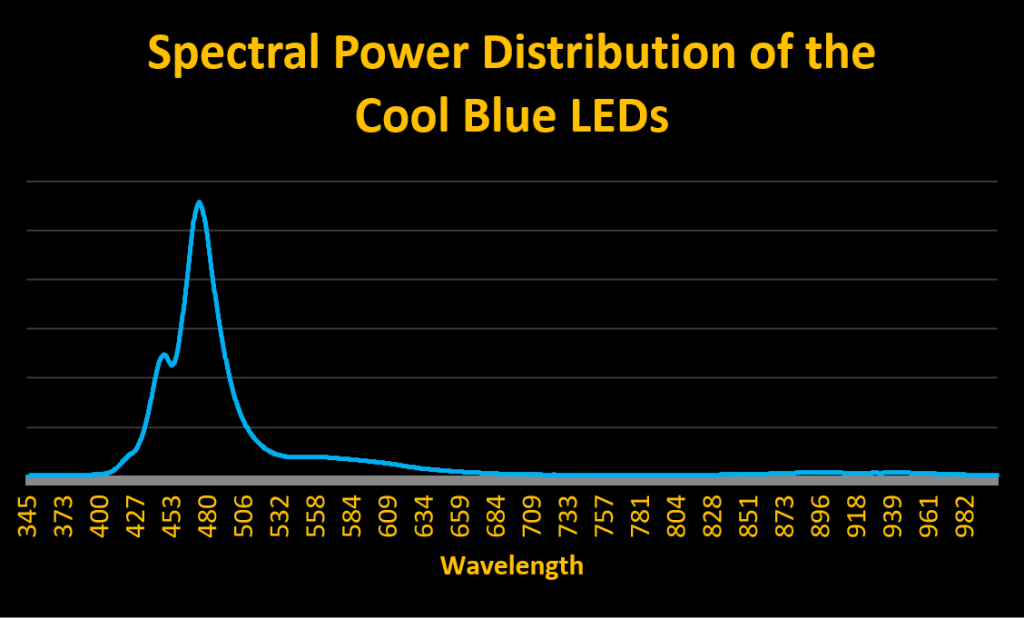 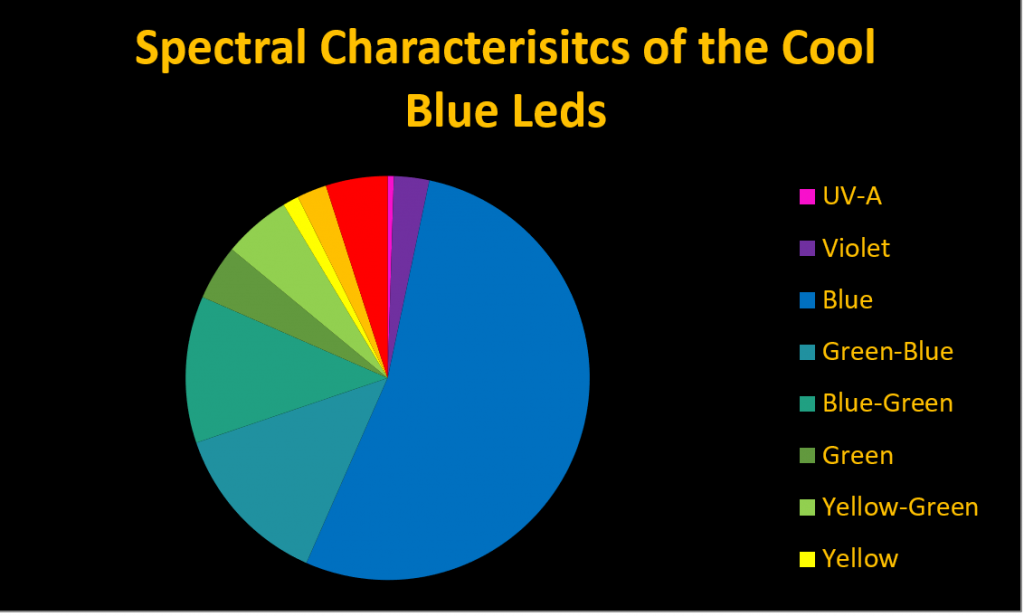 Figure 6. Mostly blue, with some blue-green and green-blue.

This luminaire contains 4 diodes peaking in the green portion of the spectrum (advertised to be Lumileds.) Light generated by these LEDs (peaking at 498nm) can be absorbed by the important zooxanthellae accessory pigment peridinin. 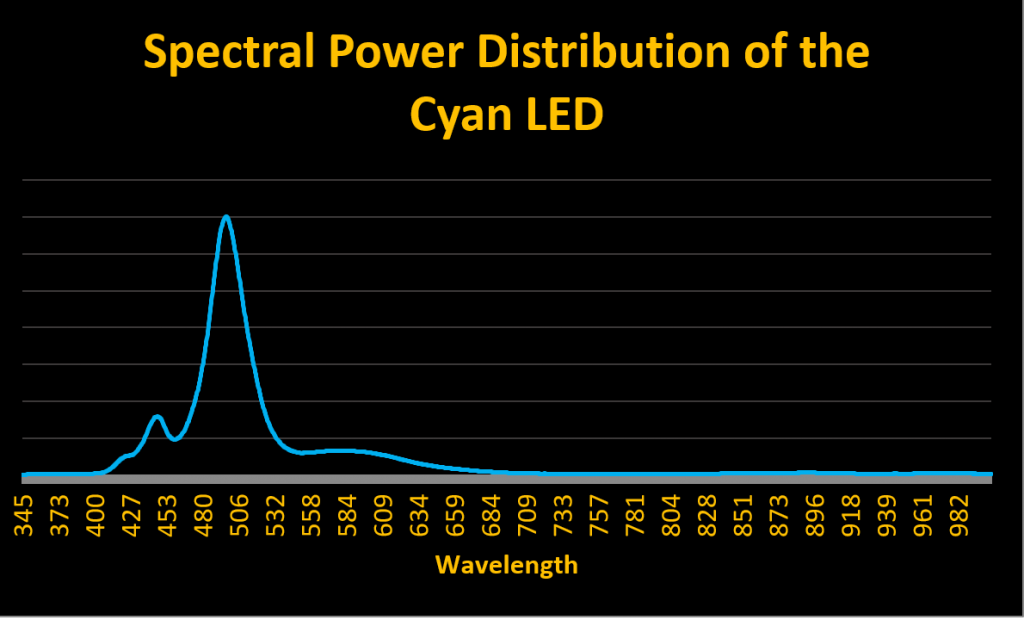 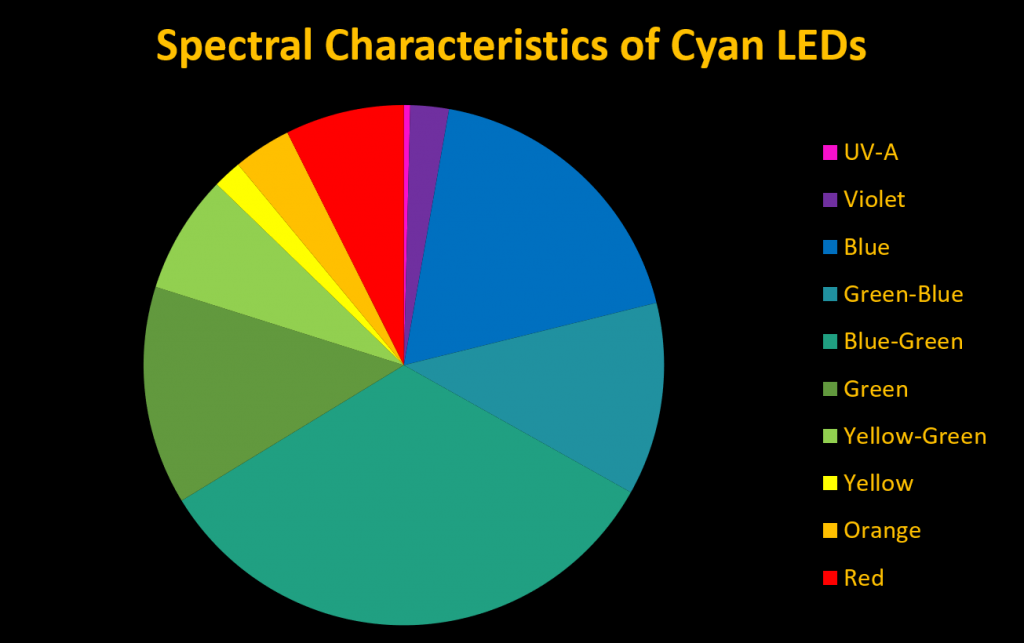 Figure 8. Green light is absorbed by the accessory pigment peridinin.

This luminaire contains 4 diodes peaking in the orange (‘amber’) portion of the spectrum, peaking  at 588nm (advertised to be Lumileds.) 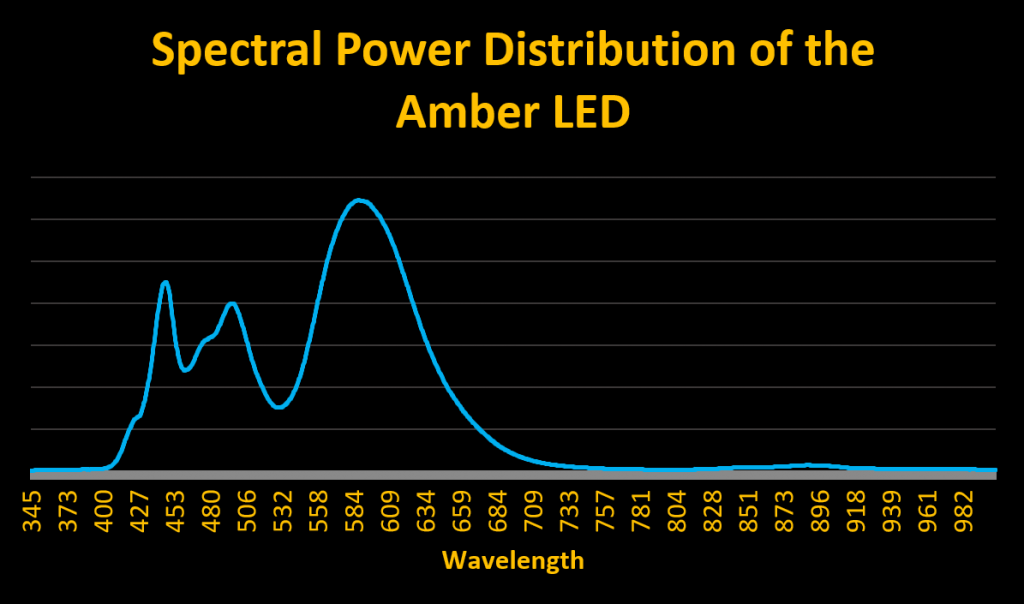 Figure 9. Peak radiation is in the orange range, with spillover well into red. Peaks to the right are diffused light from adjacent LEDs. 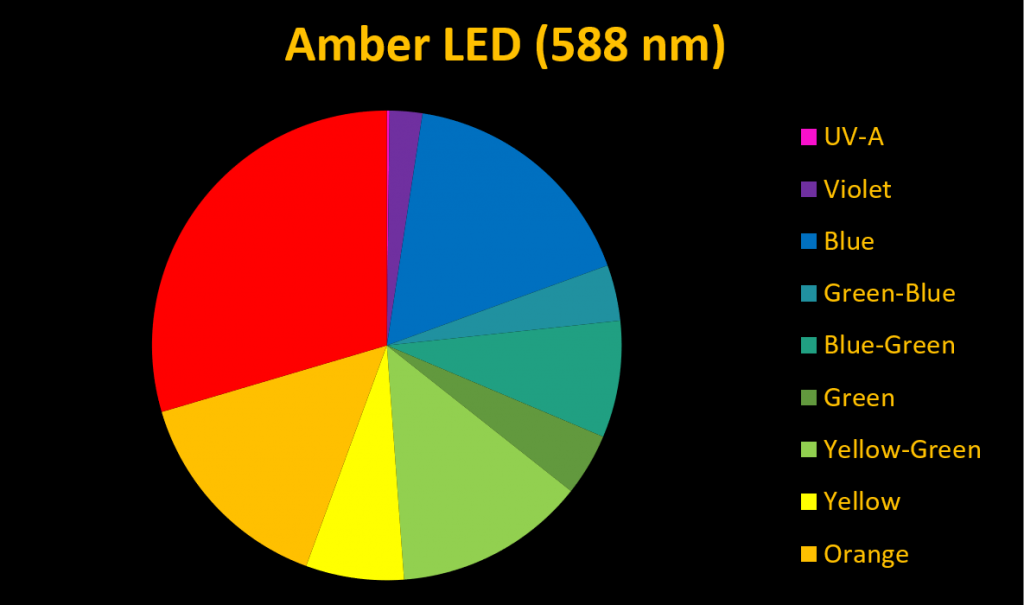 Figure 10. A break out of the amber LED along with light from adjacent LEDs. 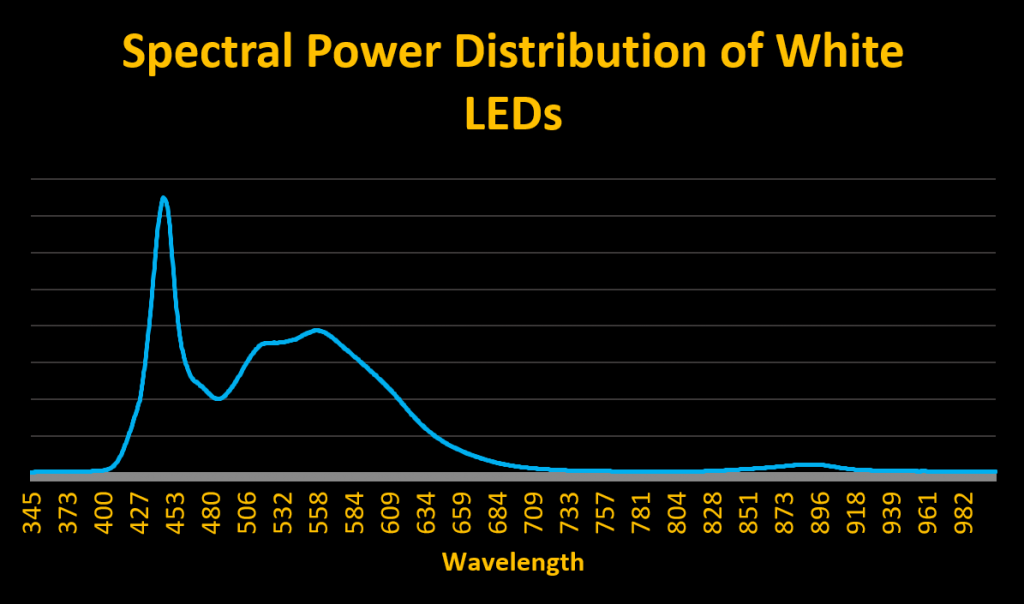 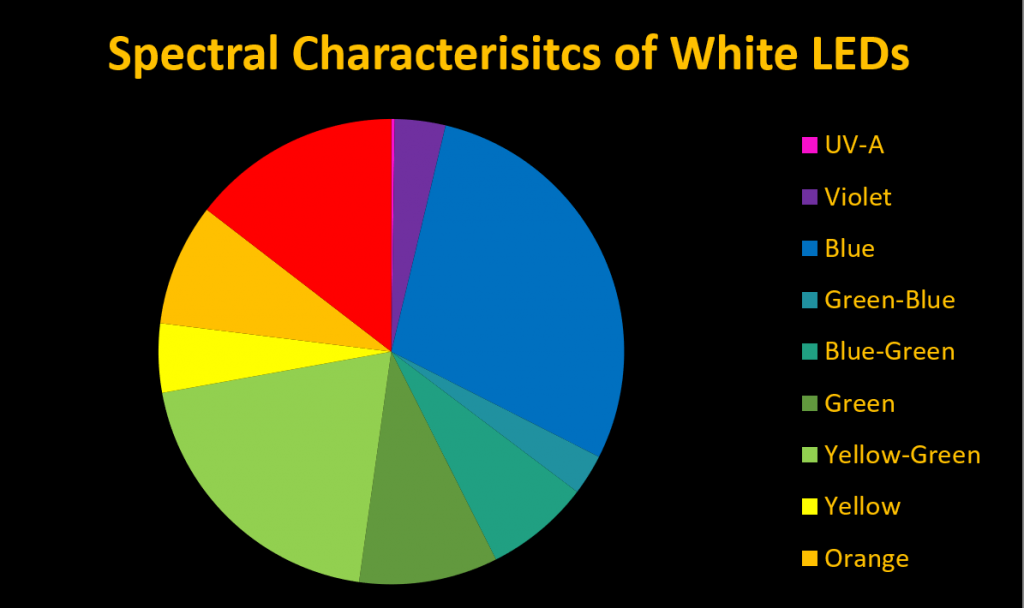 When the luminaire is at full power, output visually appears as a crisp blue-white light. See Figures 13 and 14. 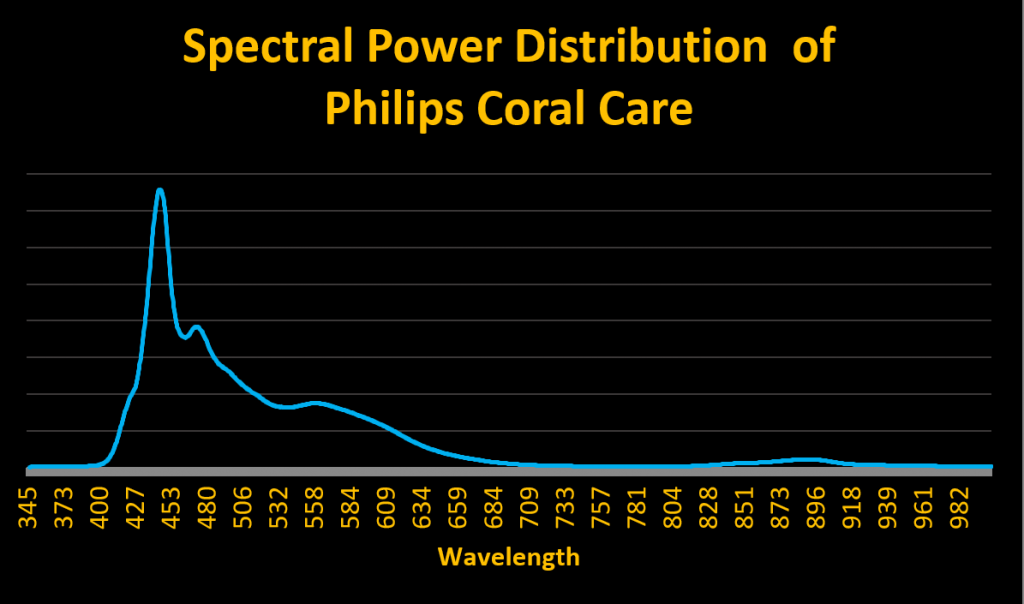 Figure 13. Both channels at full power. 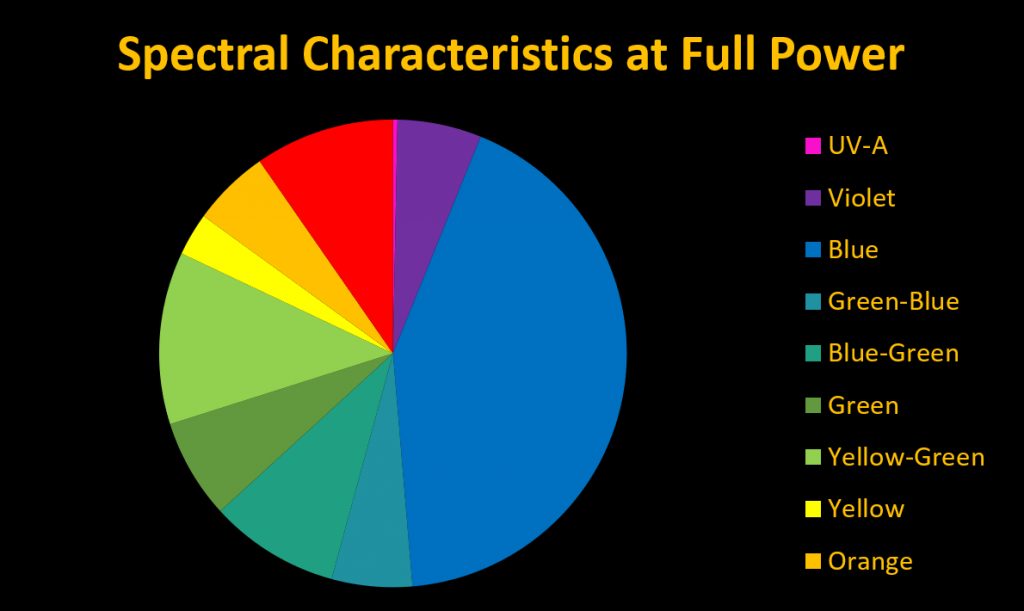 For practical purposes, light intensity is best reported through use of a quantum (PAR) meter. Simply taking one measurement doesn’t tell us much, so I used a grid system and measured PPFD every 4 inches on center. There were 41 measurements made at 3 different depths, for a total of 123. The LEDs were at 100% power on both channels. The light positioned 12.25” off the water’s surface (another set of measurements were taken when the light was 6” above the water surface.) 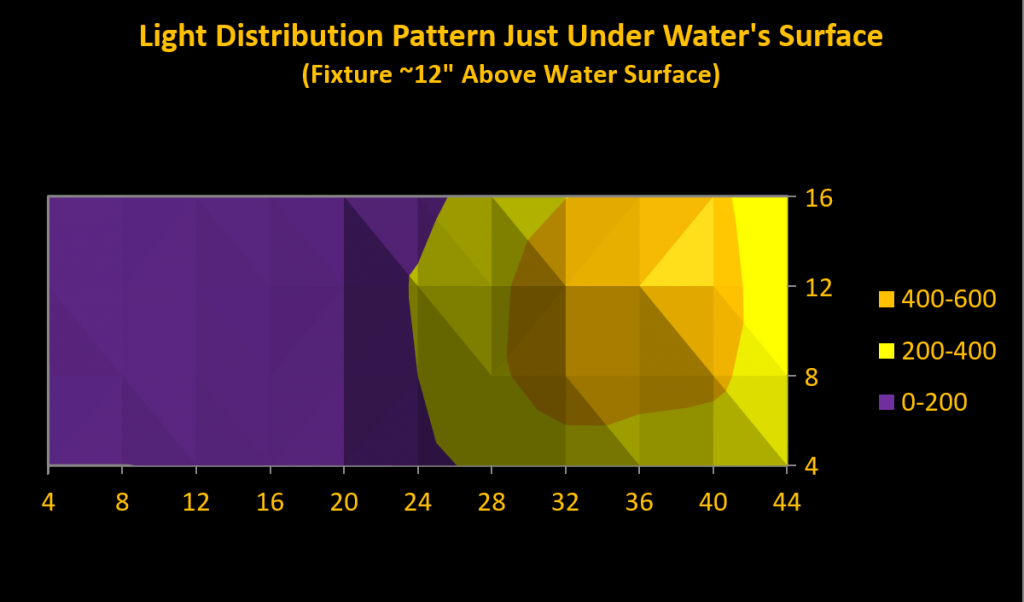 Figure 15. This distribution pattern shows the light could have been shifted about 4 inches to the left.

Figure 16 shows light intensity at a depth of 10 inches. The shadow of the brace has all but disappeared. The front of the tank is at the top, and the overflow is at bottom left. 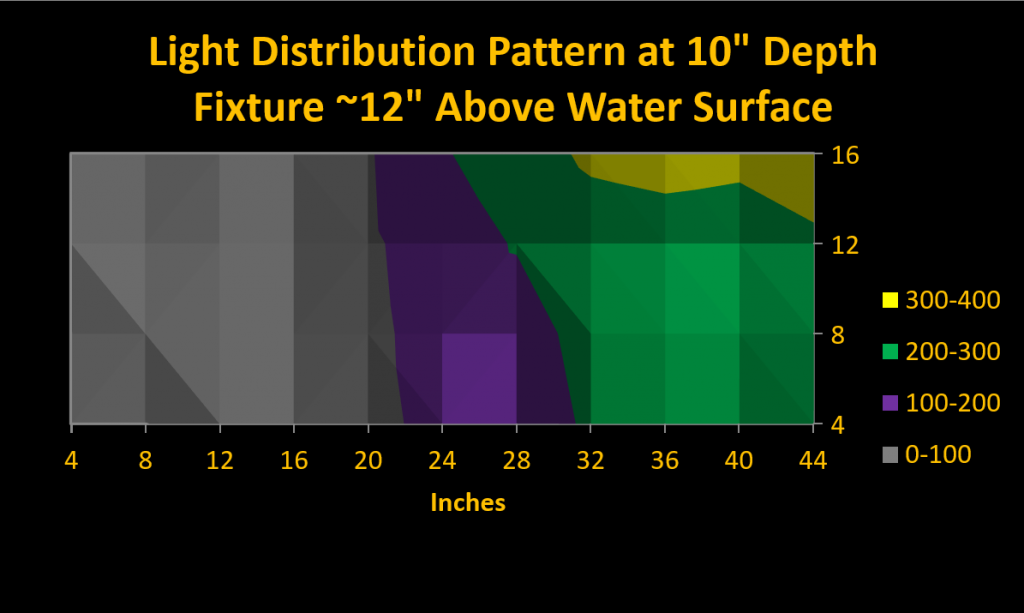 Figure 16. I’ve seen this sort of distribution pattern before, and tend to think it is caused by reflection of light by the glass.

Figure 17 is the light intensity distribution at a depth of 19 inches. 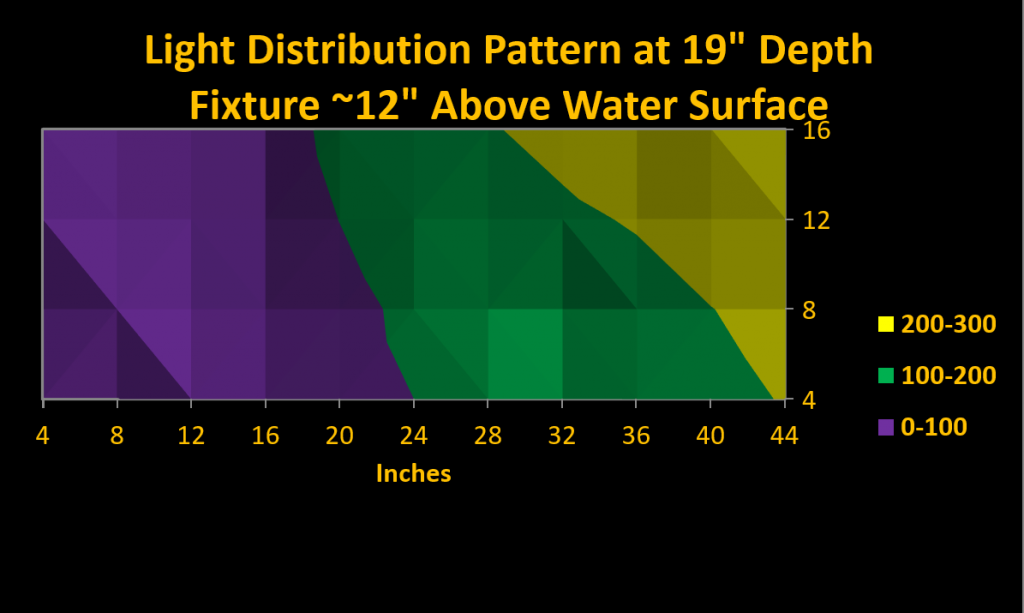 Figure 17. The front of the aquarium is at top and the overflow is at bottom left. Recall the light is over 12 inches above the water surface – it can be lowered to a height of 6 inches.

Figures 18 and 19 demonstrate PAR values at two depths (just below the surface and at 19 inches. Note these measurements were made with when there was no water surface agitation. With surface agitation will, of course, create a caustic network (shimmer, glitter, etc.) where there are pulses of more intense light. 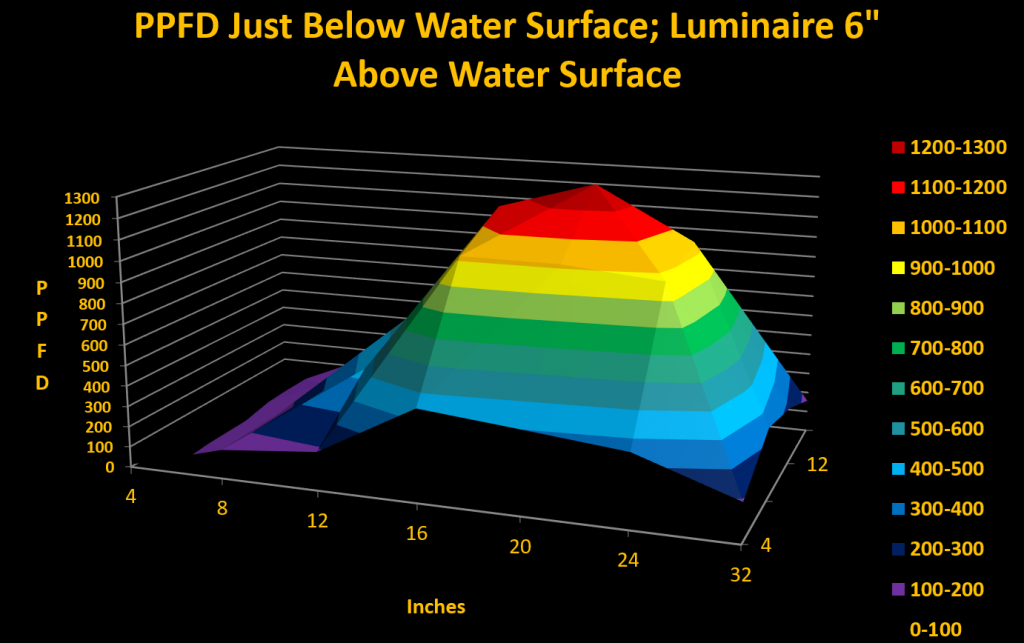 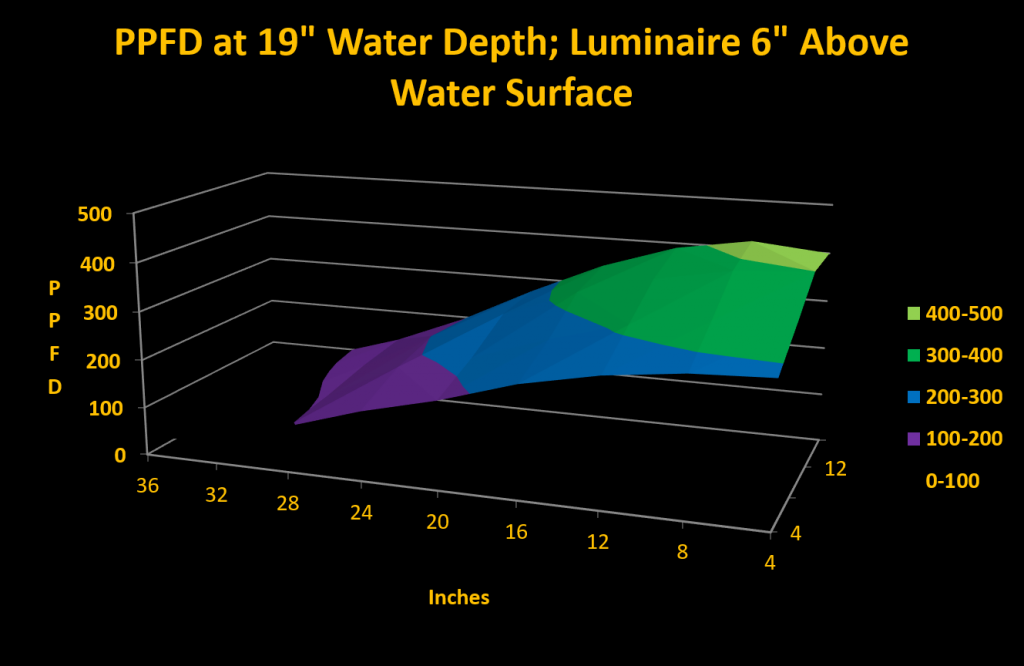 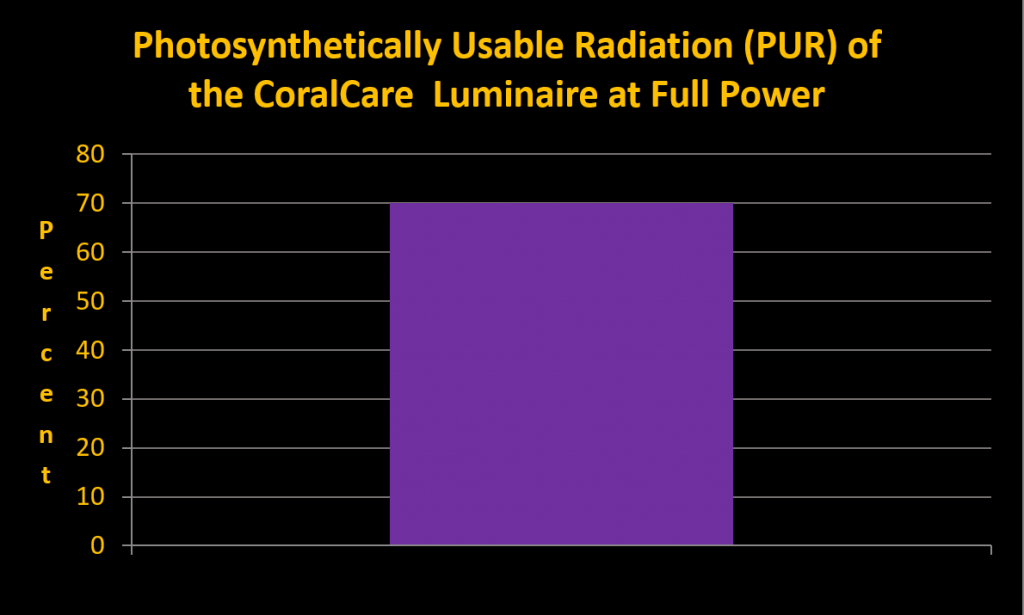 Figure 20. PUR of the Philips luminaire with both channels at full power. 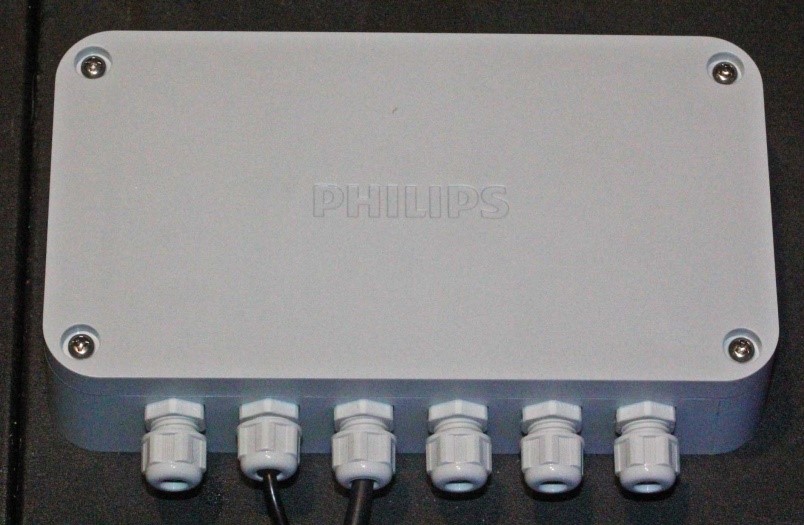 The CoralCare app can be downloaded to iOS and Android devices to operate wirelessly, or to a computer which communicates via a USB cable (included.)  An instructional video can be found here:

Excessive heat is an enemy of light-emitting diodes and if not controlled, at best, can negatively affect output and, at worst, can destroy them. The CoralCare light weighs almost 15 pounds and this weight is due to a massive heat sink hence no fans are required.

I measured heat generated by the light, and temps ranged from about 120°F on the edge of the heat sink to about 140°F in its center. Philips recommends ambient temperature should not exceed 104°F.

The luminaire can be installed in an enclosed canopy if there is 6 to 8 inches height above the light (using the supplied hanging kit is recommended.) Some limited airflow is recommended to prevent excessive condensation.

The Philips CoralCare Gen 2 consumes about 170 watts at full power.

Ingress Protection Code (IP65) means the device is not waterproof, but is resistant to multi-directional, low pressure water jets from  0.25” nozzles. The message here is that this light can be suspended close to the water surface – as little as 6 inches or so. 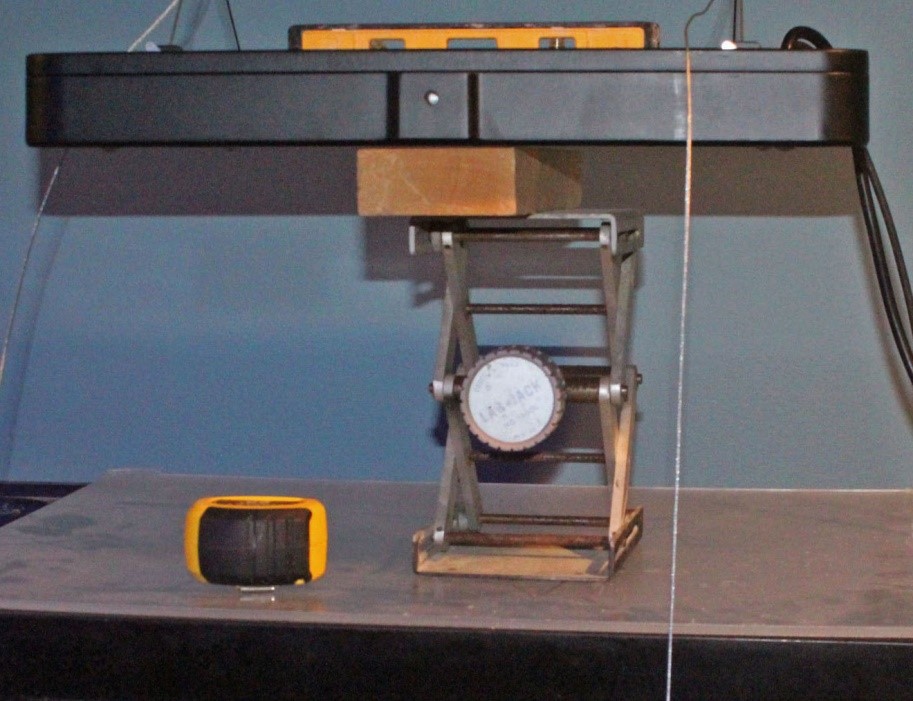 Figure 22. One person can hang this light. I used a laboratory jack, but wood blocks would work as well.

It is practically impossible to examine a luminaire with as many programming options as this light offers. Hence, color analyses were made of individual LEDs using a spectrometer fitted with a fiber optic cable. This cable terminated with a cosine-corrected collection lens, which was pointed into a PVC tube with one end covered by layers of neutral density material in order to attenuate light.

When the luminaire is suspended at 6 inches above the water level and at full power, it provides enough light to a depth of at least 19 inches that can support the most light-loving corals (those that do best at PPFD of about 200 µmol∙m²∙sec. Of course, many corals thrive at light intensity of about 100 µmol∙m²∙sec.)  It appears that one CoralCare Gen 2 is sufficient for at least two feet of aquarium length (the light was suspended with its long axis parallel to the front viewing pane.) This could have been be stretched by a few inches if I can moved the light towards the center of the long axis of the aquarium. As always, PPFD measurements through use of a quality PAR meter (such as Apogee Instruments’ MQ-510) are highly recommended.

The IP rating of the fixture is a plus.

The frosted glass splash guard is a plus in several aspects. It transmits the small amount of beneficial UV-A radiation produced by the violet LED and it will not degrade after prolonged exposure as many plastic covers do. The frosting also aids in color-mixing.

A further analysis of the Philips light is available here (note this is the Gen 1 light):

A 90-gallon aquarium (48” x 18” x 24”) was filled with freshwater to the overflow level. The CoralCare luminaire was centered above the right side of the aquarium and at distances of 6 and 12.25 inches from the water level using the suspension cables included with the light. Spectral compositions were determined by Ocean Optics USB 2000 and OceanView software. Data were loaded into a proprietary MS Excel program, analyzed and graphed. Photosynthetically Active Radiation (PAR) was reported by an Apogee Instruments’ MQ-510 quantum meter. Light distribution patterns were determined by taking PAR measurements every 4 inches across an eggcrate grid, supported at 2 or 3 distances from the light source by PVC pipes. Both channels were programmed to be at maximum power. See photo 23. Photosynthetically Usable Radiation was estimated by a Seneye device. Power consumption was measured through use of a Kill-A-Watt meter (P3 International.) Temperature was measured with a non-contact IR thermometer. 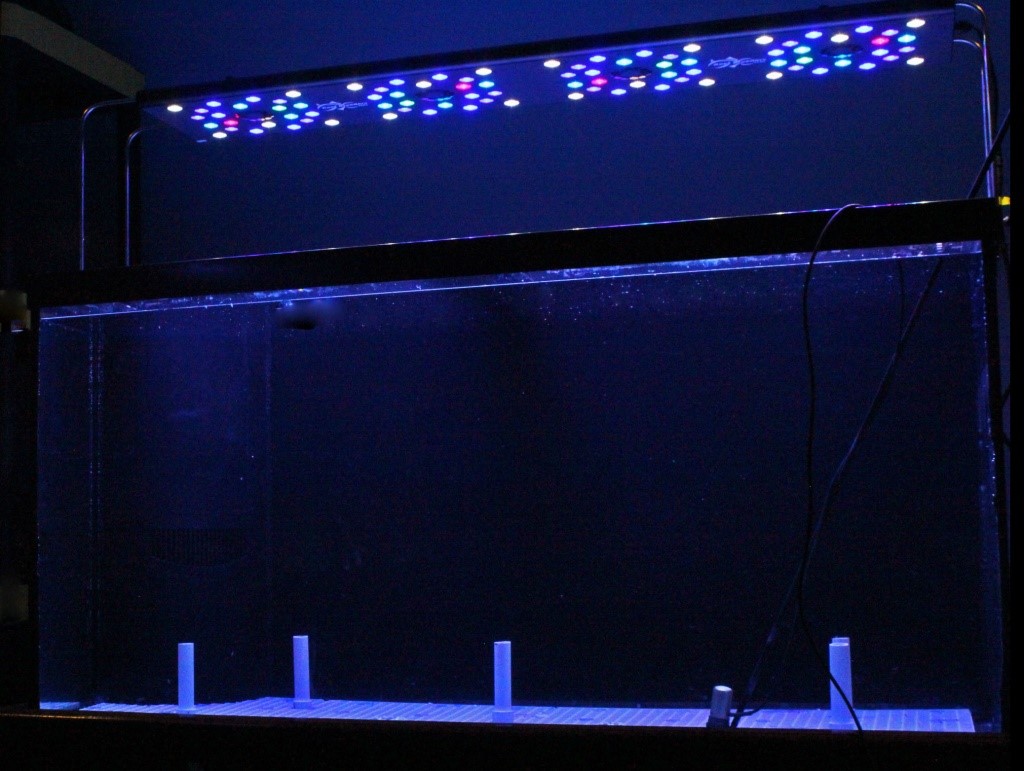 Figure 23. The test aquarium with the eggcrate grid on the bottom.

MSRP is $899 USD. The controller is an option at $150 USD, and can control up to four units. It is compatible with Generation 1 fixtures.

Materials and workmanship are warrantied for two years.

This light is on loan to me and will be donated to the Twin Cities Marine Aquarium Society after testing is completed. Many thanks to Jeff Johnston of CoralVue for providing this light.

As a final note, I performed this testing at no charge, and have no financial interest in any lighting company.