I was watching the television program “MotorWeek”
recently and they featured a segment where they evaluated an
automobile that had been driven by their staff for an extended
period of time. This same automobile was reviewed when it was new
and now they were taking a “second look” at it to
determine how well it stood the “test of time.” This
got me thinking about my own product reviews that I’ve been
writing since 1994. I thought it would be interesting and useful
to revisit some of the aquarium products that I’ve reviewed
over the years to see how well they’ve stood the
“test of time.” Some of these products have since
been replaced or withdrawn from the market for a variety of
reasons, and others I’ve stopped using for reasons other
than quality, so I won’t be taking a second look at
everything, but there’s enough stuff left to fill a few
columns. So in no particular order, here are my “long-term
product updates:”

I’m always concerned when writing about skimmers because
aquarists tend to defend their choice in skimmers with religious
fervor, and I usually get a lot of flak after writing skimmer
reviews. As I stated in my original review of the Deltec MCE600
skimmer, these are simply my subjective opinions based upon
having used or seen just about every skimmer offered for sale to
marine aquarists. 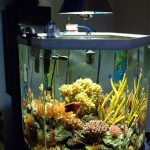 I started using the Deltec MCE600 skimmer at the beginning of
2005, and wrote a product review in July 2005, so I have about 18
months of experience with it now (June 2006). The Deltec MCE600
is a “Hang–On-the-Back” (HOB) type skimmer and
it’s advertised for use on aquariums from 100 to 186
gallons in size; although I feel it’s most appropriate for
aquariums up to 100 gallons in size. It’s an
“aspirating skimmer” that mixes air with water on the
intake side of the pump, which effectively “chops”
the air into the finest of bubbles. I was initially attracted to
it because I don’t have a sump on my 42 gallon
SPS-dominated reef aquarium. I also liked the fact that it
required only 3 inches of clearance behind the aquarium and the
only thing that intruded into the aquarium was a clear intake
pipe. My previous HOB skimmers all required the pump and/or
intake box to sit inside the aquarium. This not only looked
terrible but took up a lot of valuable space inside an already
small aquarium.

I stated in my initial review that the skimmer appeared to be
well-made from quality acrylic and PVC parts. I’m happy to
report that I haven’t experienced any failures of any
components in the time that I’ve used it. In fact,
I’m embarrassed to say that I haven’t even cleaned
the pump during this entire time. The skimmer appears to be
working as effectively today as the day I installed it, so I just
never thought a major cleaning was necessary. The only
maintenance I’ve done is to empty and clean the collection
cup every few days. It’s very true what they say about
aquarium maintenance: if a maintenance chore is difficult or
time-consuming, it’s less likely to get done. Cleaning the
collection cup on the MCE600 is a breeze and takes less than
one-minute, so I tend to do that often.

All the plumbing on the MCE600 is self-contained, so there is
no possibility of a flood in the event that the collection cup
overflows, the power goes out or the pump fails. This was
particularly important to me because my aquarium is placed close
to a wall and directly above an electrical outlet. I was able to
“test” this feature on more than one occasion because
whenever I use two-part epoxy to attach coral fragments in the
aquarium, the skimmer “goes crazy” and produces an
uncontrollable amount of foam. Since the skimmer is designed to
direct excess foam back into the body of the skimmer, none of it
winds up on the floor. Also, whenever I do a large water change,
a few of my Acropora corals emit a lot of slime. This also causes
the collection cup to overflow, unless I remember to raise the
cup by a few inches, which is very easy to do. In that case the
skimmer will rapidly remove the coral slime from the aquarium.
Other skimmers I’ve used tend to “shut down”
when overwhelmed with “coral mucus.” 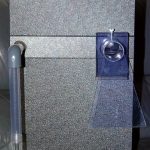 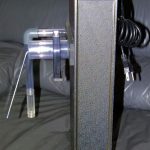 So, my initial opinions and impressions of this skimmer remain
the same. It’s the best HOB skimmer that I’ve seen or
used, and I can confidently recommend it to anyone in the market
for a high-quality HOB skimmer. You can learn more about the
Deltec MCE600 skimmer, including pricing and local dealers, on
the Deltec USA website at
www.deltecusa.us.

While we’re on the subject of skimmers, it’s worth
revisiting a skimmer that I first reviewed back in 1995 for the
now-defunct “Aquarium Frontiers” magazine. That
skimmer is the ETS 1000 from A.E Tech. I’m essentially
using the same skimmer today on my 500 gallon reef aquarium;
although I did lengthen the collection column to accommodate a
larger pump. The ETS 1000 is a downdraft skimmer and was
revolutionary at the time it was introduced. Now there are many
fine choices in large skimmers, but the ETS still holds its own
from a standpoint of price, performance, reliability, and ease of
use. 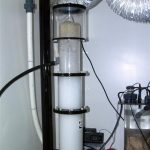 I’ve seen behemoth skimmers on some reef aquariums,
powered by multi-horse-power pumps that can’t duplicate the
performance of the ETS 1000. I’m currently using an Iwaki
100RLT pump to power my ETS 1000 because I want to extract the
maximum performance from the skimmer. This combination produces a
tower of foam that’s 32 inches tall by 6 inches in diameter
and the consistency of shaving cream. I empty a half-gallon of
dark scum from the collection container each week.

Unlike traditional venturi skimmers, the downdraft design does
not create a lot of backpressure on the pump. In my case, with
the use of the Iwaki 100RLT, I’m passing approximately
2,000 GPH through the skimmer. This enables me to process the
entire aquarium about 4 times per hour.

I generally hate doing aquarium maintenance and constantly
having to constantly fiddle with equipment, so the ETS 1000
appealed to me in these areas. There are no moving parts,
virtually nothing to adjust, and nothing to wear out or maintain.
The skimmer is well-made from high-quality acrylic and PVC parts.
The collection tower comes apart with a twist and it’s easy
to rinse it clean each week. 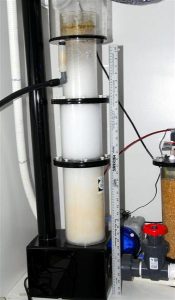 Although the skimmer is fairly stable once it’s
broken-in, it can foam violently and unpredictably at first, or
if something such as two-part epoxy is added to the aquarium, so
I utilize, and highly recommend, the accessory collection
container that effectively shuts down the skimmer in the event of
an overflow. This has saved my butt more times than I can
remember.

The ETS 1000 skimmer is still one of my top choices in
skimmers for larger reef aquariums (120 to 500 gallons).
It’s a good value and a top performer. You can learn more
about ETS skimmers at
http://www.superskimmer.com/.

This next product is somewhat odd but it appeared as part of
my first product review column back in September 1994 and I still
rely on it today. It’s the UltraLife “Mini-Reef
Trap.” Anyone that keeps a reef aquarium has at one time or
another needed to remove a fish from their aquarium. This is
typically because the fish is bullying other fish or picking at a
prized coral. As you know, netting a fish from a reef aquarium
decorated with live rock and corals is next to impossible. The
“Mini-Reef Trap” is a tubular container (4” x
9”) constructed from clear cast acrylic and features a
guillotine-type door at one end. When a fish enters the
container, you simply release the door and trap the fish inside.
There is a semi-sealed compartment at the back of the trap that
holds food. This is intended to entice fish to enter the
container. Although fish can’t reach the food, they can
smell it. 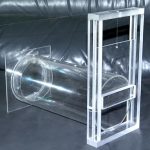 Depending upon how aggressive a fish is, it can take from a
few minutes to a few hours to catch it. I’ve found that
most tangs and wrasses will enter the trap within minutes, while
angelfish are a bit wary and may take a few hours before building
up the courage to enter the trap. It helps to withhold food for a
day or more before using the trap. Hunger often overcomes fear.
If you have a really stubborn fish, I suggest leaving the trap
inside the aquarium for a few days until it’s considered
part of the decoration and no longer “feared.” If a
fish is picking at a particular coral, place that coral inside
the trap as a means of luring the fish inside. The position of
the trap in the aquarium will also determine its effectiveness.
Place it on the substrate to catch bottom-dwelling fish or
mid-way to ensnare mid-water swimmers, such as Anthias and
Chromis. I fastened suction cups to my trap in order to attach it
to the glass. I also tied a four-ounce lead sinker to the end of
the string that’s connected to the trap door. This allows
the door to remain open without having to continually hold the
string. Once the fish I’m after enters the trap, I simply
lift the sinker to quickly close the door.

The UltraLife “Mini-Reef Trap” was a unique
product when it was first introduced in mid-1990. Now there are
similar products on the market and even one that’s
constructed of glass. Although I haven’t used these
competing products, they don’t appear to be better designs
or better values than the “Mini-Reef Trap.” The
“Mini-Reef Trap” can be found for sale at many local
pet stores, at some of the larger online vendors, and directly
from the manufacturer at
http://www.ultralifedirect.com/traps.htm.