My February 1999 Aquarium Frontier’s review of the SpiderLight reflector evaluated the reflector using a Aqualine 175 watt bulb and tar ballast. We therefore have a useful metric by which to evaluate the double ended bulb and fixture. Briefly, the protocol consists of measuring light intensity every inch (roughly the width of the light sensor) over a 20 inch by 20 inch grid. The light intensity is then plotted in a X-Y-Z diagram where the X and Y axes represent of location of the sensor and the Z axis is the light intensity (PAR) in uE/sec/m^2. For a complete explanation of the protocol used for the SpiderLight evaluation, please refer to the Aquarium Frontier’s review.

The intensities shown for the 175 watt single ended bulb using a SpiderLight reflector are directly comparable to the Aqualine double-ended 150 watt bulb and fixture with one exception. For the single ended system, intensity was measured over the area forward of the bulb. Intensity was not measured in the area directly behind the socket of the bulb. In contrast, light generated by the double ended fixture was measured over an area that extended in all directions from the fixture. Consequently, the diagram shows both negative and positive distances with (0, 0) representing the area directly below the center of the inner envelope. During the evaluation, line voltage, current drawn, and power consumed by the system was monitored. The fixture consumes 210 watts during operation.

Diagram 1 shows the results of the evaluation. The most obvious difference between the SpiderLight/175 watt system and the AB/150 watt system is the greater intensity of the 150 watt system. The highest intensity measured with the 175 watt system was 54 uE/sec/m^2. And this intensity was measured at a point well away from the bulb. In contrast, the highest intensity measured with the 150 watt system was 131 uE/sec/m^2, an intensity 140% brighter than the 175 watt bulb system generated. An equally striking difference is the light field generated by each system. The SpiderLight creates two intense ridges of light projected some distance from the center of the reflector. The double ended system’s greatest intensity is directly below the bulb and light falls off predictably as the distance from the fixture increases. 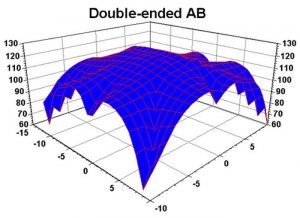 Light fall-off is also greater with the SpiderLight system. At a horizontal distance of two feet as measured from the base of the bulb along the long axis of the bulb, intensity dropped by two-thirds (68%) from the most intense areas. In contrast, two feet from the center of the AB system, light has only dropped off by 27%. Somewhat surprising, light fall-off is fairly symmetrical with the double ended system. At a distance of ten inches from the center of the bulb along the axis of the bulb, light intensity has dropped to 95 uE/sec/m^2. At the same distance perpendicular to the long axis the intensity has dropped to 88 uE/sec/m^2.

The double ended system produces more intense light, and equally importantly, it produces more intense light over a larger area. All this with a bulb that actually produces less light than its equivalent single ended brethren. How is this possible? For the reason outlined in part one of this review: The designer of a double ended system can maximize light efficiency because the geometry of the bulb is known. The facets of the reflector can be specifically tailored to the bulb. In contrast, the designer of a reflector designed for single ended bulbs has to make certain assumptions about the geometry of the bulb used and how the reflector will be used.

With the AB system, the reflector is mounted very close to the bulb. The reflector center ridge that reflects light away from the upper part of the bulb is just a fraction of an inch from the bulb. This ridge reflects otherwise lost light to an adjacent facet which then reflects the light into the tank. With the SpiderLight (as well as similar reflectors from other companies), light travels some distance before striking any reflector. The reflected light must then travel a considerable distance before it strikes the second facet that directs the light into the tank. The longer distances the light must travel combined with a more open geometry accounts for the lower light levels measured with the SpiderLight.

So which generates more light, an Aqualine double-ended 150 watt bulb or single ended 175 watt bulb? The short answer is that it depends. Clearly, Aqualine engineers have done an effective job in maximizing the light output of the 150 watt fixture. Could a hobbyist achieve the same efficiencies with a single ended system? My answer is possibly, with a carefully designed specular reflector. It is quite unlikely, however, that a hobbyist could achieve these light levels even with a 400 watt system if little consideration has been given to the system’s reflector.