I hope last month’s column was useful to you as you begin to plan your first reef system. Understanding the various technical elements that are necessary and those that are optional are an important part of starting off on the right foot. Before you are truly ready to begin, however, there are a few more terms and concepts that you should have a grasp of. To this end we will continue building our annotated glossary focusing on the basic language and concepts of captive reef system chemistry. 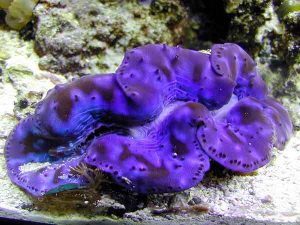 Tridacnid clams like this beautiful T. maxima are wonderful additions to reef systems with sufficient metal halide lighting and excellent water quality.Tridacna species seem to be particularly sensitive to changes in salinity and aquarists should guard against frequent and rapid fluctuations.

Alkalinity
Here we are concerned primarily with carbonate alkalinity and this concept is a very critical one for successful reef aquariums. Alkalinity is the measure of the buffering capacity of a liquid (in this case salt water) against addition of acid. Alkalinity measurements are typically expressed in meq/L (milliequivalents per liter) or dKH (degrees carbonate hardness). Reef systems should be maintained close to natural sea water levels or 2.9 meq/L or 8 dKH respectively. These levels are best achieved through the use of a ‘balanced’ supplement like limewater, a two- part additive, or a calcium reactor. Alkalinity is one of the chemical parameters that must be tested regularly. There is also a close relationship between alkalinity, calcium, and pH in the aquarium and this is an area that is worthy of some further reading.
Calcification
In aquaristics, this term almost always refers to the process that corals and calcareous algae use to extract calcium and carbonate alkalinity from seawater and turn it into their calcium carbonate structures. In a properly functioning system, available calcium ions and carbonate alkalinity are rapidly depleted by this process. Really what we are talking about here is the growth of your calcifying organisms. As a result of this growth, both calcium and alkalinity need to be supplemented on a regular basis (see calcium).
Calcium (Ca)
A common ion found in sea water that is used by a variety of organisms including corals, mollusks, crustaceans, sponges and some algae in the production of their skeletal structures through a process called calcification. This is another parameter that must be tested regularly. Calcium readings are commonly expressed as ppm with natural seawater having a calcium concentration of between 400 and 450 ppm. As with Alkalinity, these levels are best achieved through the use of a ‘balanced’ supplement like l_imewater_, a two-part additive, or a calcium reactor.
Nitrate
Chemically expressed as NO3-, Nitrate is the final byproduct of the complex series of bacterial based chemical processes known as nitrification (see below) that cycle organic waste in the aquarium. While relatively non-toxic to marine life, high levels of nitrate can stress organisms and make them vulnerable to other pathogens. More commonly, nitrate is a wonderful fertilizer and too high a level can lead to a rapid progression of nuisance microalgae that can quickly overtake a reef system. Nitrate readings are expressed in ppm with readings below 10ppm considered acceptable by some reef aquarists. However, one should strive for the lowest levels possible. The use of Live Rock and/or Deep Sand Beds can help maintain nitrate levels close to zero by providing anoxic (low oxygen) zones that harbor specialized bacteria that convert nitrate to harmless nitrous oxide gas. 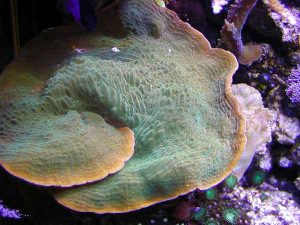 Pachyseris rugosa is a hardy and attractive coral, that does well under a variety of conditions. The specimen pictured here is thriving under Very High Output (VHO) fluorescent lighting, showing rapid growth and excellent coloration.

Nitrification
The process by which bacteria convert toxic ammonia into less toxic (in seawater) nitrite and then into relatively harmless nitrate (see nitrate above). Nitrification is sometimes erroneously called ‘the nitrogen cycle’ in aquaristics. This is a continual process. Stabilized reef aquaria typically run at ammonia and nitrite concentrations that are both undetectable by hobby-level test kits and far below toxic thresholds for marine organisms. However, when the system is first set up, it is critical that ammonia and nitrite readings are monitored until both are at zero. This may take anywhere from a week to a month. Zero readings indicate that a sufficient quantity of the needed nitrifying bacteria have accumulated to handle CURRENT LEVELS of waste produced in the aquarium. The system should be stocked very slowly at this point so the nitrifying bacteria can multiply accordingly.
pH

A measure of the concentration of hydrogen ion (H+). pH is formally defined as the negative log of the hydrogen ion activity in a solution. In water solutions, anything below 7 is considered acidic and above 7 is alkaline. Natural tropical ocean-surface seawater has a pH between 8.0 and 8.25 and this is the range that the home aquarist should strive for. The concentration of carbon dioxide (CO2) has a direct influence on pH, via formation of a weak acid, carbonic acid, when carbon dioxide is dissolved in water. Carbon dioxide is absorbed by photosynthesis during the day (pH goes up), and liberated due to respiration at night (pH goes down.) These fluctuations are normal and should be of no concern unless they reach lower than 7.8 or higher than 8.5. pH can be measured by traditional titration test kits, dip and read test strips and most efficiently and accurately by a properly calibrated electronic meter. The pH of reef systems tends to become increasingly acidic due to the production of acids via the normal biological processes of the inhabitants, and depletion of carbonate alkalinity by calcification. pH levels can be controlled with buffers, but should not prove problematic with the appropriate use of any of the ‘balanced’ calcium/alkalinity supplements.
Phosphate 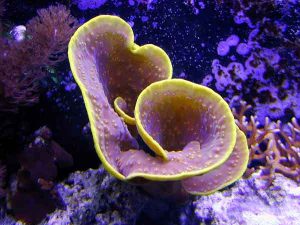 Turbinaria reniformis forms wonderful cups and whorls and is among the most rugged of stony corals.

containing phosphorus, a common element essential to all life. Phosphate has a tendency to accumulate to problem levels rapidly in captive reef systems. It enters the system as a normal waste byproduct of biological processes, decaying food and in unpurified tap water. Phosphate is usually measured in ppm. with readings of 0.03 ppm (as phosphorus) or lower considered acceptable. Higher levels than this are associated with unwanted blooms of microalgae and have been shown to impede the ability of reef organisms to calcify normally. Suffice it say that phosphate levels need to be monitored regularly with a good quality test kit, and inputs need to be controlled by sensible stocking levels, appropriate feeding regimes, and the use of highly purified water for all water exchanges and top-offs. High levels can be brought under control via a series of large scale water changes (with purified water) and by the use of limewater which has been shown to help precipitate phosphate out of seawater in significant quantities. 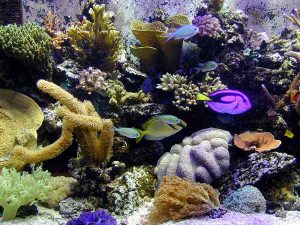 Steve Donowitz’s 150 gallon reef sytem is a good example of what can be achieved by combining a sound system design and a basic understanding of the biological and chemical requirements of reef organisms in captivity.

Salinity
describes the total concentration of dissolved salts in seawater, and is perhaps the single most important water chemistry parameter in marine aquaria. Salinity has been historically expressed as ppt (‘). Natural ocean-surface seawater has a salinity close to 35 ppt across much of the tropical world ocean, although there can be significant regional (Red Sea) and temporal variation (heavy rains.) Despite the recommendations of some of the older aquarium literature which suggest lower than natural levels, there is little evidence to justify this notion. It is important to note that many marine wholesalers and retailers do keep their livestock at below normal salinity levels and this has important ramifications on the acclimation of newly acquired species. Most reef organisms do not adjust well to rapid changes in salinity and it is very important to know the salinity levels in your dealers systems so you can accurately judge how big an adjustment your new purchases will have to make (i.e. how slowly and over what period of time they will need to adjust). Salinity can be measured by several means including: floating or swing-arm hydrometers, refractometers and electronic conductivity meters. All of the measurement methods listed above require proper calibration for accurate readings, and all are potentially affected by temperature. There are straightforward and robust temperature compensation schemes for conductivity and refractive index measurements. Hydrometers require the use of a temperature compensation table to get meaningful, temperature-corrected values.
Specific Gravity (SG)
the other commonly used measurement of the strength of seawater. SG is an expression of density in relative to pure water at a reference temperature. Natural seawater has a SG of 1.024-1.026 and is equivalent to 35ppt salinity (see salinity). 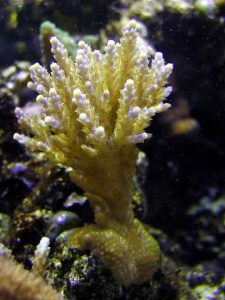 This unidentified species of “tri-color” Acropora is an example of the many interesting aquacultured corals now available to hobbyists.

The ideal temperature for the captive reef system is the source of continued debate. Traditionally, reef systems have been maintained in the 76-78’F range with great success. In the past few years, there has been a trend toward running systems at significantly higher temperatures of 82-86’F. The idea is that this range more closely matches the conditions most coral reef organisms are found in the wild. While this may be true, my personal observations and those of many other hobbyists is that while most organisms will survive at temperatures above 84’F, many will not do so for extended periods of time. I prefer to split the difference between philosophies and recommend a consistent temperature between 78-82’F. I should also note that it has been my experience that most reef organisms have a greater tolerance for temperatures below their ideal range than ones above it. For this reason, it makes sense to give a little cushion on the upper end of the range. It has also been my experience that small (2-3 degree) fluctuations over the course of the day are not problematic. Temperature in the reef aquarium can be controlled by a combination of a reliable heater and either small fans, a chiller, or room air conditioner.

From my decidedly unscientific vantage point, if you understand the fundamentals of the terms detailed above, you know enough about reef aquarium chemistry to succeed. I have intentionally left off the list several commonly referred to issues like Iodine, Strontium and Magnesium supplementation because the application, efficacy, and necessity of these supplements is the source of continued and heated debate. For the novice, it is more important to focus in on the core essentials and know that through regular partial water changes with purified water and a high quality salt mix; these other issues pretty much take care of themselves. For those of you who wish to learn more about reef aquarium chemistry, I highly recommend you seek out the wonderful articles by Craig Bingman and Randy Holmes Farley in this publication and those archived from Aquarium Frontiers magazine.