Seahorses have long been thought of as being too sensitive to keep in captivity. The truth is that they are actually quite sturdy and resilient, but they are also susceptible to certain conditions and infections as unique as their anatomy. Knowing how to prevent and treat these conditions can significantly increase the lifespan of captive seahorses. Because of the modern captive seahorse diet of thawed frozen food, combined with outdated myths on proper seahorse care such as tropical temperatures and slow water flow being ideal, Vibrio bacterial infections are now one of the leading causes of captive seahorse death. 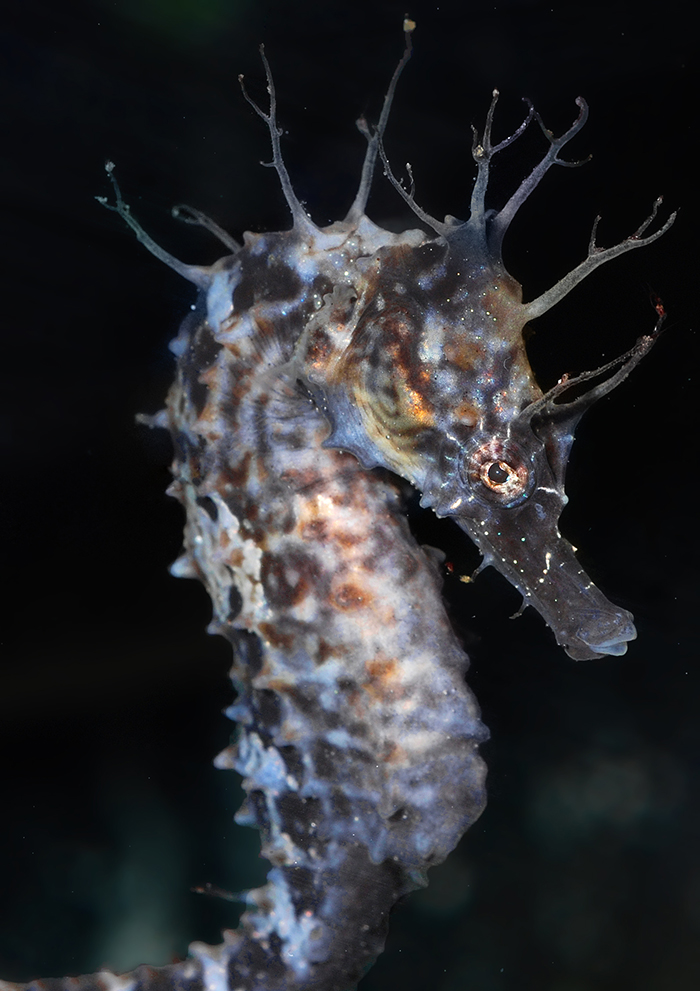 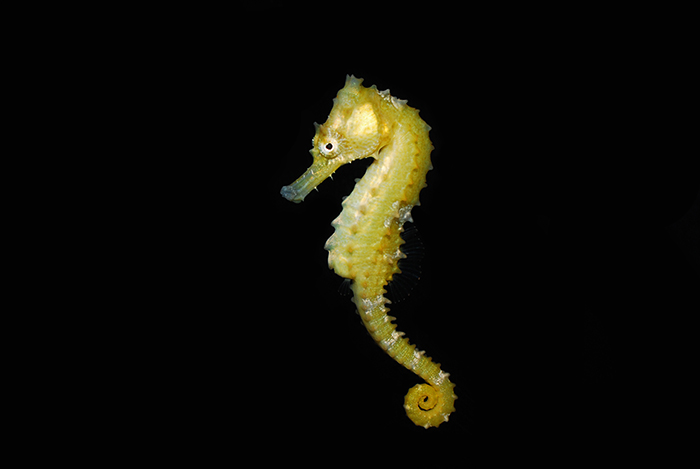 What Temperatures Favor the Growth and Virulence of Tropical Infectious Vibrio?

When tropical seahorses were first collected for home aquariums, it was assumed that they would thrive at tropical temperatures ranging from the upper 70°Fs to the lower 80°Fs. It is now known that housing seahorses and other Syngnathids at or below 74°F can help prevent tropical Vibrio infections [1]. 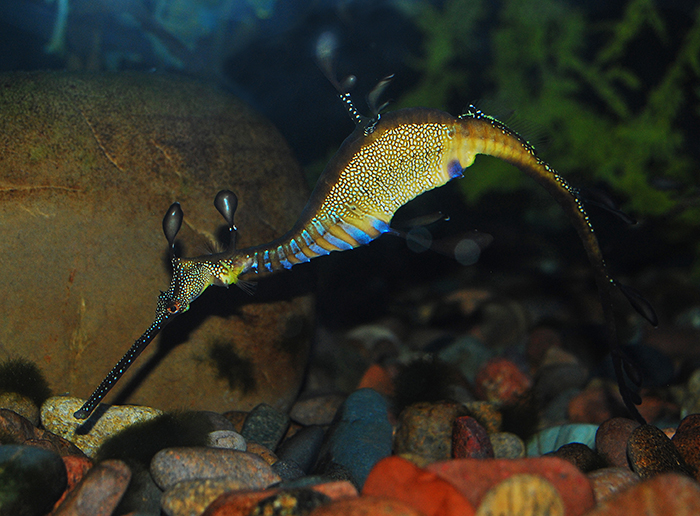 Decades of research show warm summer temperatures to be the most significant factor affecting the abundance and virulence of tropical Vibrio species which commonly infect seahorses [1] [12] such as Vibrio alginolyticus [2] [3], Vibrio parahaemolyticus [3], and Vibrio harveyi [4]. Like V. cholerae, these species are also responsible for infections in humans. Though there have been no reported cases of V. cholerae infecting seahorses, there have been reports of tropical marine fish in captivity contracting V. cholerae [5]. The optimal temperature for Vibrio cholerae survivability and abundance is between 68°F and 86°F. [6] Related tropical Vibrio coralliilyticus and other infectious strains of Vibrio spp. also favor these same temperature conditions. 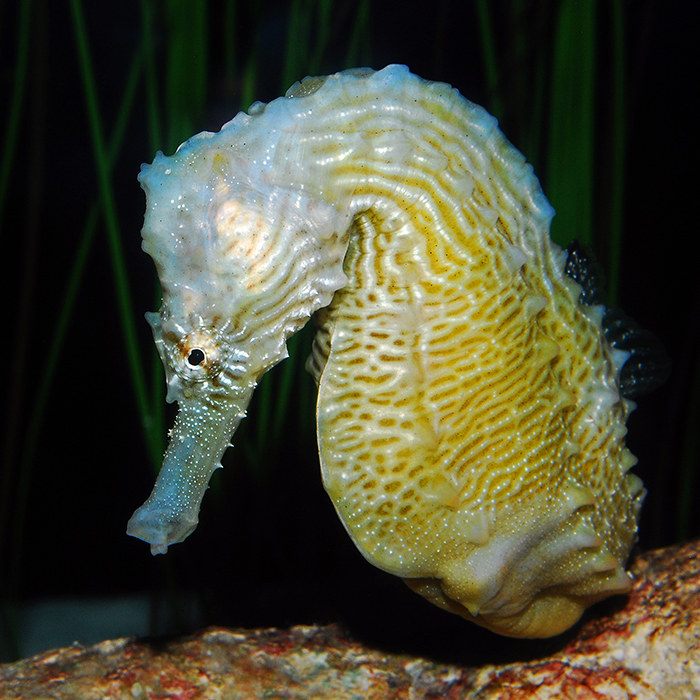 Researchers at the Hollings Marine Laboratory discovered a temperature dependent trait in the bacteria Vibrio coralliilyticus, which may be partially responsible for coral bleaching events. Just like the tropical Vibrio bacterium found in seahorses, Vibrio coralliilyticus does not normally cause disease in healthy Pocillopora damicornis coral specimens at a temperature of 75°F, but becomes pathogenic at higher temperatures. Temperatures above 80°F increases the aggression and severity of the infection. Even healthy tissue struggled to resist infection when temperatures reached 83°F [7]. 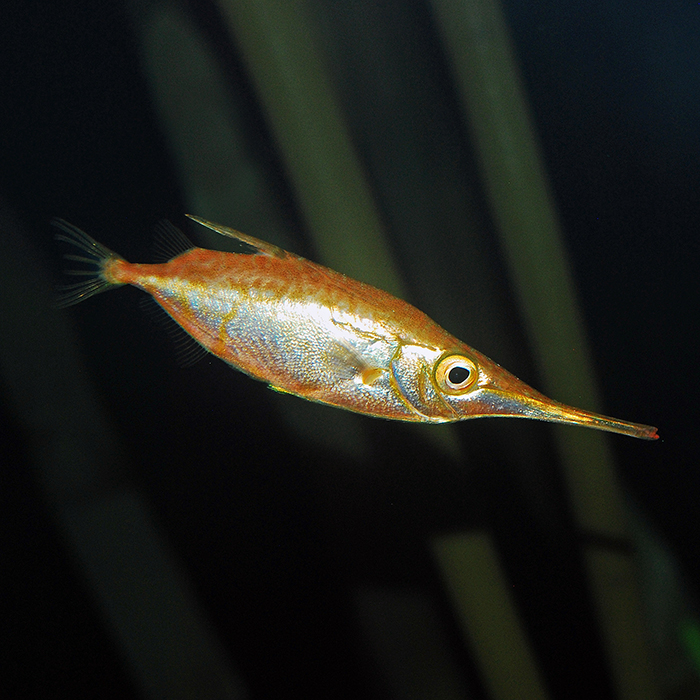 For over a decade, anecdotes from the seahorse hobbyist community showed a correlation between high temperatures and Vibrio bacterial infections in seahorses kept as pets. In the book Working Notes – A Guide to Seahorse Diseases, pathologist Martin Belli M.D. found that strains of Vibrio samples taken from captive seahorses did not grow well in a lab at temperatures lower than 64°F. Seahorse.org members have long advocated seahorse aquarium temperatures below 75°F because, as Dr. Belli shows, tropical Vibrio is more aggressive and virulent at higher temperatures. [1]

How is Vibrio Introduced to Aquariums?

Both benign and opportunistic bacteria (such as Vibrio spp.) are present in even the cleanest aquariums, as well as in nature. Dr. Belli found that up to 70% of the seahorses he sampled tested positive for Vibrio, but only about 30% actually died from it. Healthy seahorses testing positive are likely to be asymptomatic carriers [1]. Vibrio can be introduced via any infected or asymptomatic crustacean, shellfish, or fish. It also regularly attaches to copepods, some of which are invisible to the human eye [8]. Vibrio is ubiquitous in all brackish and saltwater environments including aquariums, and can be present in live rock, corals, or even a drop of water. 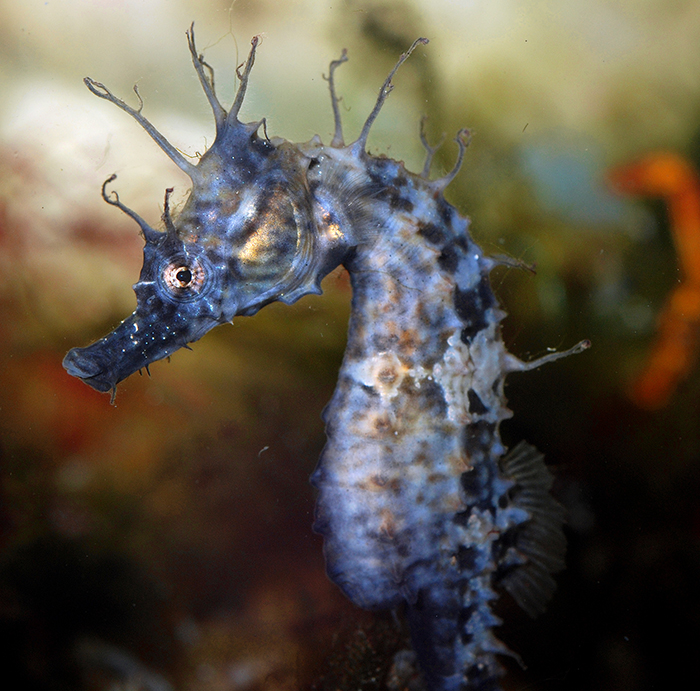 What Makes Seahorses and Other Syngnathids Vulnerable to Vibrio?

Seahorses in the wild only eat living crustaceans. In the past seahorse keepers had to constantly provide expensive live foods, but commercial frozen Mysis shrimp has made it easier and less expensive to feed them. The only drawback to frozen diets is that seahorses and other Syngnathids never evolved the immune system tissues called GALT (gut-associated lymphoid tissues) [9] responsible for protecting them from bacteria on dead food. Foods start to decay immediately upon death and freezing only slows this process. After thawing and introduction to the aquarium the food rapidly collects bacteria. Seahorses can suffer from bacterial infections as a result of eating old or decaying frozen food. Seahorses that are fed a live food diet are more likely to survive in aquariums with higher temperatures than seahorses that are fed frozen foods because the live foods are not decaying. 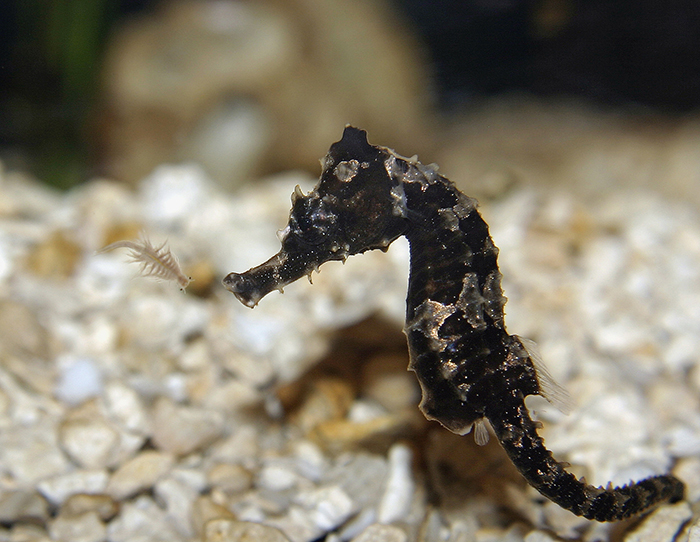 How can Vibrio Infections be Prevented in Captive Seahorses?

Nearly all seahorse experts recommend hobbyists employ an aquarium chiller to keep the temperature at or below 74°F. In nature and aquariums alike, tropical Vibrio spp. become more virulent and aggressive at higher temperatures, while its growth is significantly impeded at temperatures below 68°F. 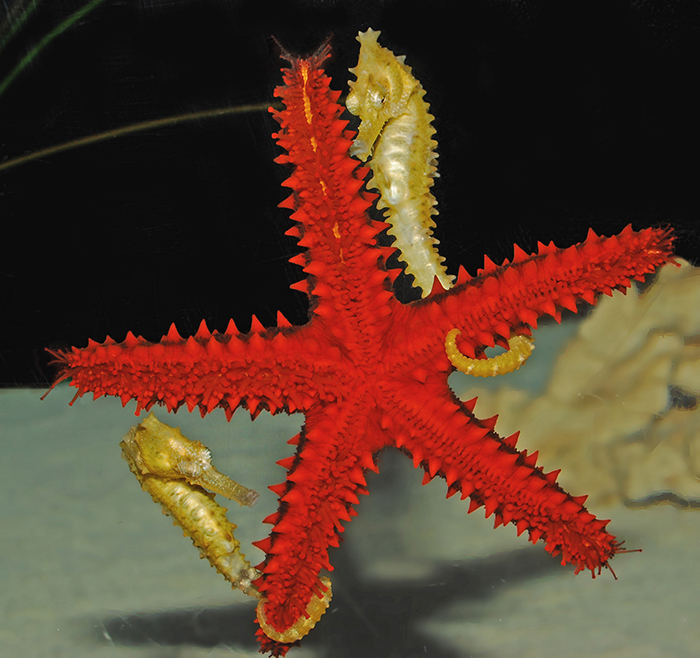 The most obvious way to prevent illness and bacterial infections of any kind is to keep the aquarium water clean. Regular, adequate water changes can not be avoided in a seahorse aquarium. Keep concentrations of nitrates and dissolved organics as low as possible, as these favor the growth of infectious bacteria and cause stress on the seahorse immune system. Using a UV sterilizer, Protein Skimmer, and strong filter can also help keep the water clean. Contrary to popular belief, seahorses thrive with strong, laminar currents. Low water flow creates dreaded “dead zones” that permit the collection of organics and the growth of bacteria. Scrubbing the surfaces and insides of pipes and equipment regularly can prevent the buildup of bacteria there. A crowded seahorse aquarium makes it more likely the seahorses will come into contact with their Vibrio-laden feces. 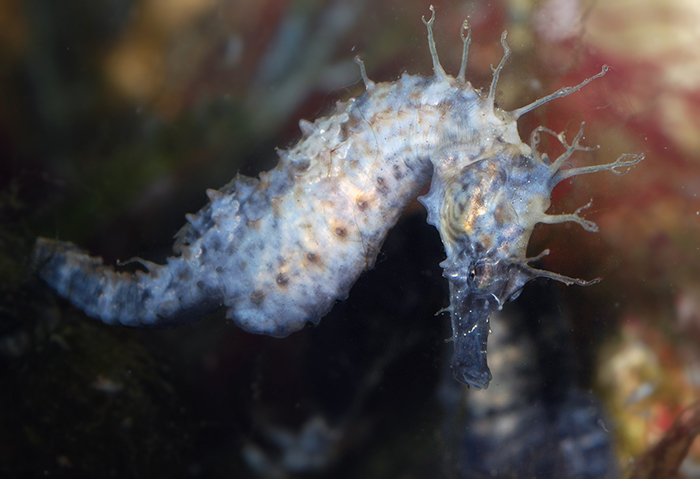 Quarantining new arrivals and animals showing signs of illness is not an option; it is a necessity. Different species of Syngnathids from various regions of the world may be more or less resistant to tropical Vibrio based on the temperatures of their native environments [1]. Vibrio bacteria can even be transferred between tanks via your hands, fish nets, specimen containers, and feeding syringes. If you plan to mix different species of seahorses or pipefishes together you would be taking a risk, but you can help to minimize potential infections by quarantining your new arrivals for at least 9 weeks. The new seahorses must be eating perfectly and be free from symptoms of disease or injuries before introducing them to the main tank, so quarantine for as long as it takes. An appropriately sized and properly installed UV Sterilizer can help reduce infectious bacteria in the aquarium. There is absolutely no fail-safe way to mix seahorse and/or pipefish species together and ensure they will not succumb to Vibrio infection or other transferable diseases or infections. Risk increases with age, water pollution, decreased immunity, stress, and physical damage. 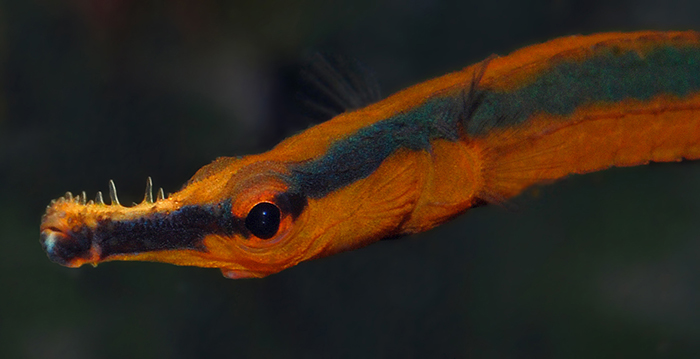 Seahorse keepers can help prevent Vibrio colonization of thawed frozen food by placing it in a clean feeding dish, or by keeping the food in constant motion using adequate water flow. Nassarius snails and other scavenging “clean-up crew” animals can help consume uneaten food. If food is leftover after a feeding or feces are present before feeding, simply siphon the food or fecal material out of the aquarium. Thawed food remaining after a feeding should never be left in the aquarium for a seahorse to find and consume later. 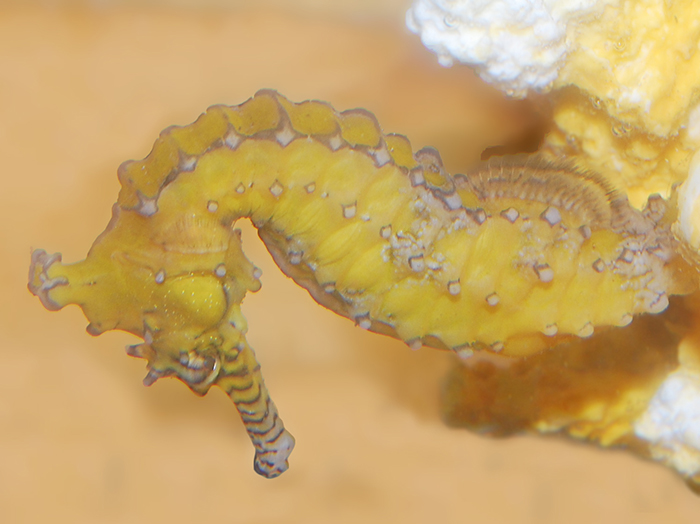 Seahorses coming from sub-tropical or temperate zones may have little to no resistance to Vibrio strains found in tropical waters. This is why it is so important to keep cool-water seahorse species at their recommended captive temperature, and to also avoid keeping them at tropical temperatures even for a short time in the wholesale or retail store holding tanks. Keeping cool-water seahorses with tropical seahorses or other fish, especially those from a different ocean, can expose them to strains of Vibrio to which they have no immunity. When cool-water seahorses are exposed to tropical Vibrio strains the resulting infections are very difficult to treat and may kill in less than a day. 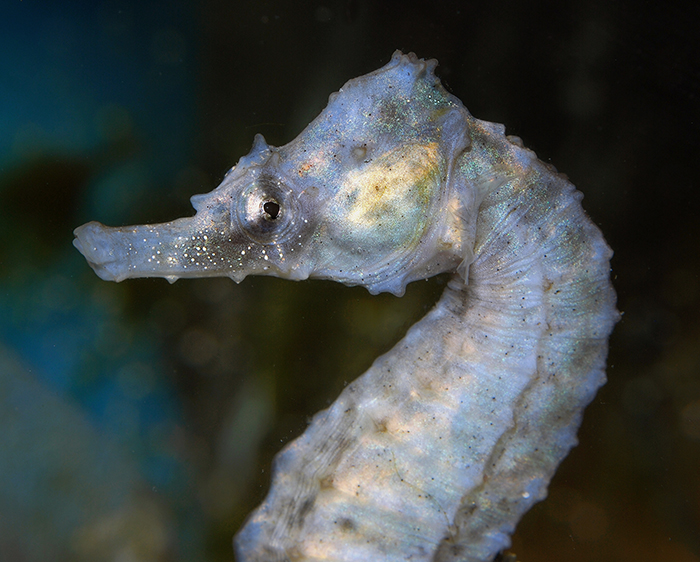 One species of Vibrio known to infect Syngnathids in captivity that prefers temperatures below 68°F is Vibrio splendidus [10]. A new species of Vibrio discovered in 2010 isolated from wild Hippocampus guttulatus seahorses in the Mediterranean called Vibrio hippocampi has an optimal temperature of 68°F [11]. These and similar species may be responsible for infecting weak or damaged seahorses at these temperatures. Keeping temperatures at the lower end of a temperate seahorse species’ preference can help slow the growth of these cool water Vibrio spp. while they are being treated with antibiotics in a quarantine aquarium. 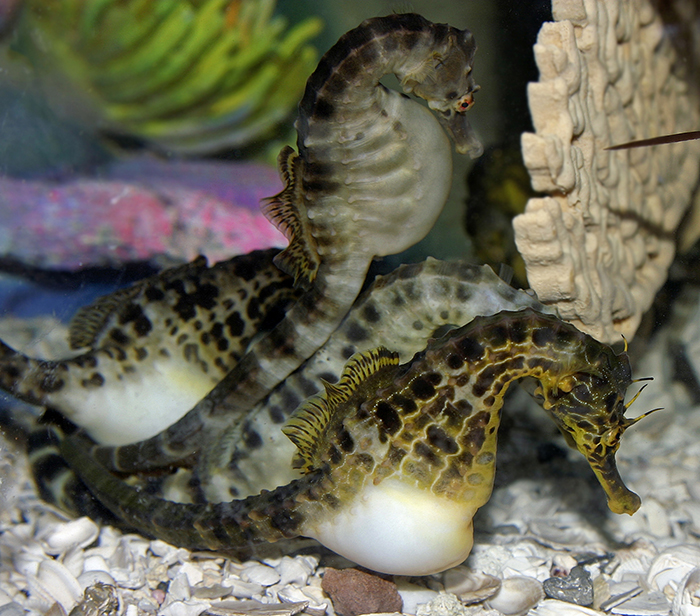 If a seahorse or pipefish develops white or raw patches of eroded skin, especially on the snout, tail, or a wound, it is likely a Vibrio bacterial infection. Immediate relocation of the seahorse to a bare bottom, sterile 10 gallon hospital/quarantine tank with some plastic hitches and the temperature gradually set to 68°F (or lower depending on the seahorse species’ cold tolerance) can slow the rate of infection. Some over-the-counter antibiotic medications commonly effective against Vibrio are Triple Sulfa, Furan 2, and Neomycin [1]. Veterinarians and professionals treating Vibrio in Syngnathids frequently prescribe Doxycycline, Ceftazidime, Chloramphenicol, Ciprofloxacin, and Enrofloxacin. Azithromycin has not yet been widely used in Syngnathids to treat Vibrio, but is effective against Cholera in humans. These drugs can be more effective than OTC medications against aggressive, resistant strains of Vibrio in Syngnathids when used under the direction of a veterinarian. Seahorse hobbyists are recommended to join a seahorse community such as Seahorse.org or FusedJaw.com where they can receive immediate advice if necessary. 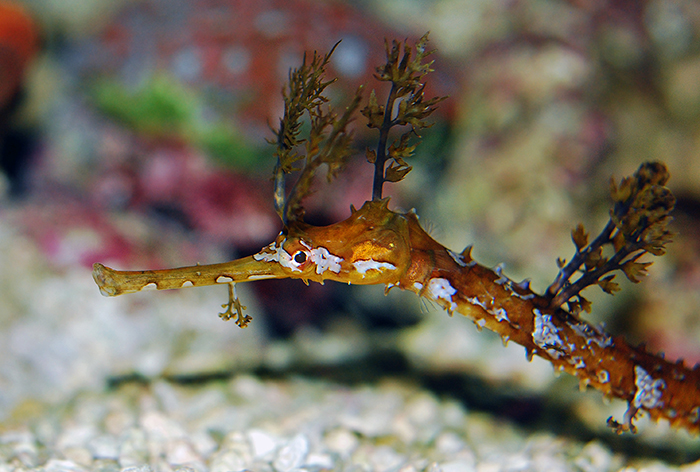