I set up a 60 gallon refugium aquarium about 9 months ago and seeded it with various species of macroalgae. I’m happy to report that the aquarium has met my expectations, despite the fact that commensal flatworms of the Order Acoela hitchhiked into the aquarium on some of the macroalgae. The exact species is Convolutriloba retrogemma. This is a non-parasitic flatworm that presumably feeds on algae and detritus in the aquarium. It can grow to a length of 5-7 mm and is red-yellow in color. Similar to corals, this species of acoel flatworm incorporates zooxanthellae in its body. Given enough food and enough light, it multiplies asexually by fission and can become an unsightly plague in the aquarium. I discovered that they can be removed by siphon easily enough, but I intentionally let them multiply in order to experiment with biological controls. 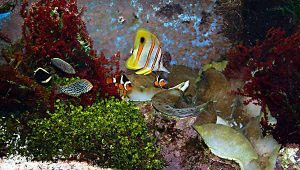 I introduced various species of Anampses and Macropharyngodon wrasses, which include small marine worms as part of their natural diet, but these fish showed no interest in the flatworms. The spotted mandarinfish (Synchiropus ocellatus) is purported to feed on acoel flatworms, so I added two of these to the aquarium. I never observed them feeding on the worms and the flatworm population continued to increase. These flatworms are apparently distasteful to most fish because they accumulate toxic substances within their bodies.

Julian Sprung and Charles Delbeek wrote in Reef Aquarium Volume Two that certain nudibranchs of the genus Chelidonura feed exclusively on acoel flatworms. I was able to acquire two Chelidonura varians nudibranchs at a local store. These attractive nudibranchs measured 5 cm in length and sported electric blue lines along their jet black bodies. Interestingly, they are shaped similar to their flatworm prey and possess two streamer-like appendages and a hammer-shaped head. Within minutes of being let loose in the aquarium, they began devouring the flatworms. Their feeding actions can best be compared to vacuum cleaner. As they come upon a flatworm, they fold part of their body and form a straw-like proboscis that they use to “suck” up the worms. They definitely began to make a dent in the population of flatworms, but there was still plenty to eat.

Within a few weeks of feeding on the flatworms in the aquarium, I noticed that both specimens became larger and more “plump.” One evening they came together and spawned. They left behind a large curly mass of white-colored eggs attached to strands of algae by a sticky substance. Nudibranchs are simultaneous hermaphrodites and over the past few months they have taken turns laying egg masses throughout the aquarium. The egg mass is typically 5-6 cm in length and 2-3 cm in width. The eggs hatch within three to four days but I have not seen any larvae, which isn’t surprising since they are smaller than rotifers and not visible to the naked eye. I plan to place a subsequent batch of eggs in a petri dish and view them under a stereo microscope. I hope to observe the development and eventually hatching of larvae.

Many tropical species of nudibranchs have extended planktonic stages and I don’t anticipate any of the pelagic larvae will settle out and become juveniles in the aquarium. They will most likely become food for other organisms in the main aquarium, which is one of the reasons for maintaining a refugium in the first place! 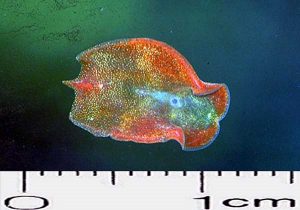 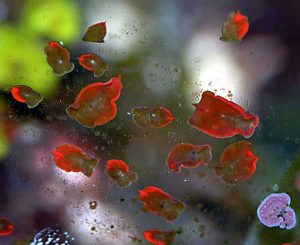 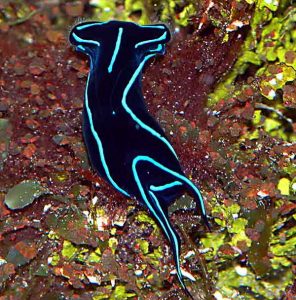 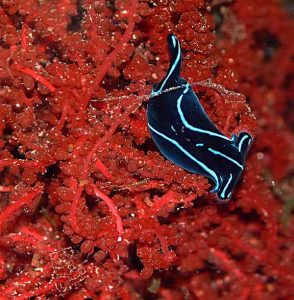 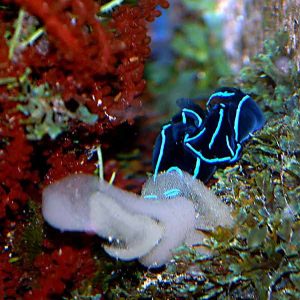 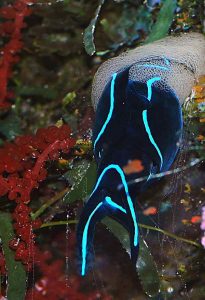