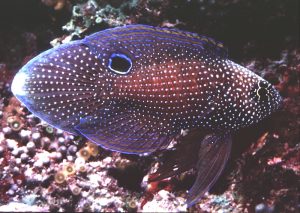 In Volume 1, issue 9 of Advanced Aquarist I wrote an article on the husbandry of the comet ( Calloplesiops altivelis ). In that article, I briefly discussed the taxonomic status of the finespotted comet ( Calloplesiops argus ). I concluded, based primarily on the observations of Kuiter and Debelius (1984) and Kuiter (2000), that this species is synonymous with C. altivelis.

In this short article I would like to re-examine the taxonomic status of C. argus.

One or Two Species?

There has been some controversy over the number of species in the genus Calloplesiops. Originally two species were recognized in the genus. The second species, the finespotted comet ( Calloplesiops argus ), was thought to be distinguished from C. altivelis by its coloration and the size of the pelvic fins (when folded down, they extend back to about the middle of the anal fin in C. argus ). (There may be other meristic differences between the two “species” as well.) The spots on C. argus are much smaller, the white patch on the end of the tail is more larger, and there are blue lines on the pelvic fins and median fins. 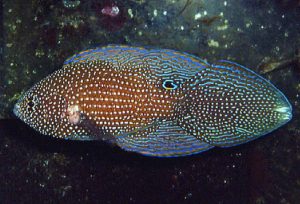 But Kuiter and Debelius (1994), and more recently Kuiter (2000), reported that these chromatic differences and changes in the relative size of the pelvic fins were simply related to the fish’s age and size. They suggest that as C. altivelis grows larger, the spots on the head and body become smaller and more numerous, the spots on the median fins elongate and join, and the white patch becomes more pronounced at the tip of the tail. The pelvic also become proportionally larger. Kuiter (2000) reports, having observed the two color forms in close proximity to one another on a reef slope off the island of Flores, Indonesia, the following: The C. argus phase was approximately 16 cm (6.2 inches), while the C. altivelis was about 12 cm (4.7 inches). This apparently catalyzed him to conclude that C. argus is simply the larger (possibly male) color form of C. altivelis. 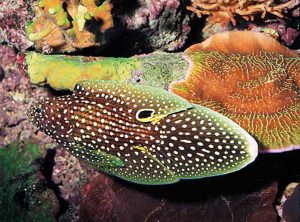 While it is true that juvenile comets have much fewer, larger spots than the adults, there is now increasing evidence that supports the hypothesis that C. argus is a valid species. For example, C. argus (or the C. argus phase) is rarely seen in the aquarium trade or in nature. Even though large, adult comets of the C. altivelis-type are quite frequently collected. If C. argus is simply the adult color form of C. altivelis why is it so infrequently collected or observed in nature? Also, many people have kept individual comets in their aquariums for numerous years. Even so, I have yet to see or hear from a fellow aquarist that they have seen a comet change from the C. altivelis to the C. argus color phase. Calloplesiops argus also has a much more limited distribution, having only been reported from Indonesia and the Philippines.

But maybe the most important piece of evidence supporting the validity of C. argus is a specimen that was recently sent to me by my friends Dennis and Erik Reynolds at Aquamarines (a wholesale fish supplier). They sent me a perfect example of the finespotted comet that was only 7 cm (3.5 inch) long! That is much smaller than the largest C. altivelis color phase that I have seen. From these observations, I would suggest that C. argus is actually a valid species. It appears to be quite rare. I have only seen three C. argus in my lifetime (all in the aquarium trade) and Erik Reynolds told me that they see about three C. argus a year at the Los Angeles wholesalers they frequent. 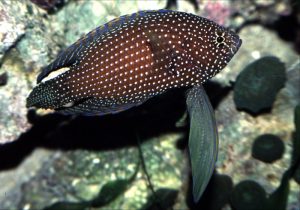 Recently I spoke with reef specialist Julian Sprung who told me he is sure that C argus is a valid species. He too has seen a number of small individual C. argus. He also points out that C. argus has a steeper profile and is more laterally compressed than C. altivelis. 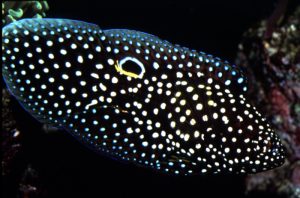