Shrimps for the Marine Tank

There are several species of shrimps that are commonly kept in marine tanks, with many of them considered reef safe, but first off, a little biology.

Prawn or shrimp – what’s the difference?

There are many terms for creatures that offer some interchangeability: mushroom or toadstool or even tang or surgeonfish, for example. There is often confusion as to where the biological definition, if there is one, cuts in. Then there is always the issue of the common or garden terms we’ve been using in everyday life getting mixed up based on our preferences and misconceptions. In the case of whether something is a mushroom or toadstool , there’s no biological meaning to these words, but we tend towards calling the ones we eat and like, mushrooms. Scientifically it’s irrelevant. For many people the names ‘shrimps’ and ‘prawns’ are often two words for the same creatures, but there is a difference. 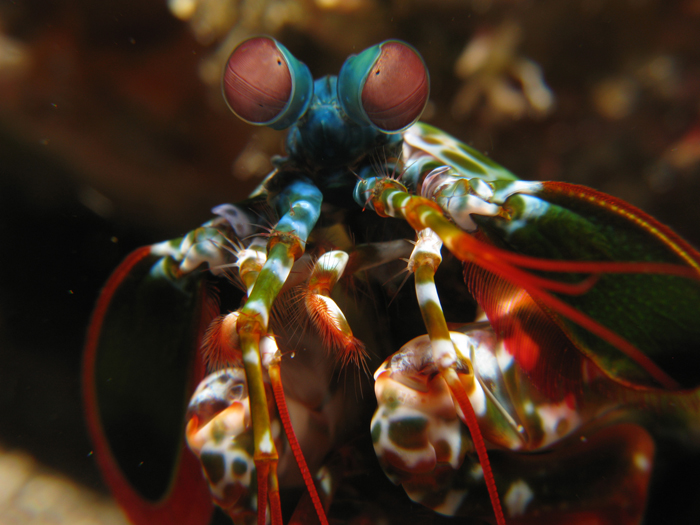 Despite being called ‘shrimps’ Mantis shrimps belong to the order Stomatapoda.
Photo by Prilfish, Creative Commons.

There are several infraorders within the decapods. True prawns belong to the infraorder Dendrobranchiata, which references the creatures ‘branched’ gill structures. Another key difference between this order and shrimps is that dendrobranchiates release their eggs directly into the water and do not brood them on their swimmerettes as in the
common or garden cleaner shrimps (Lysmata amboinensis & L. grabhami).

There are 540 extant species of prawn in seven families.
Shrimps belong to the infraorder Caridea which is divided into 16 superfamilies and contains many of the species we are familiar with in our tanks, though we are a long way from seeing any more than a fraction of the roughly 2800 species in our local fish shops. Shrimps are common across the planet, in marine and fresh waters (cherry shrimps (Neocaridina heteropoda) for example), and are enormously important as commercially exploited species for the food industry. 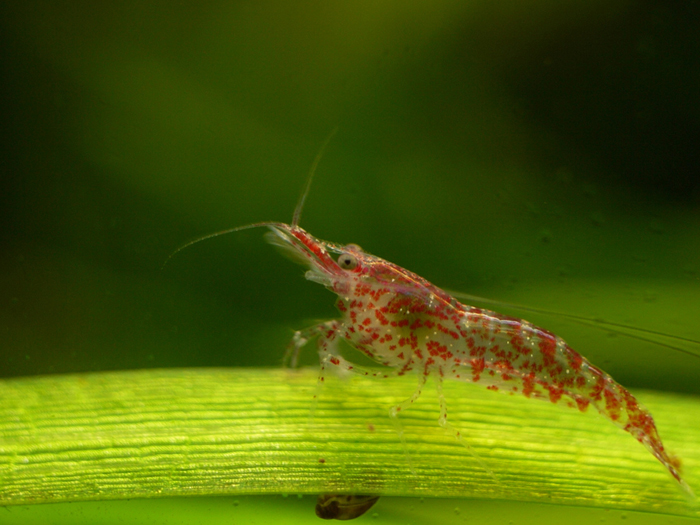 There are around 600 pistol shrimp species and identification to the species level by the average aquarist or dealer is unlikely. Pistol shrimps are remarkably common but rarely seen. Most aquarists realise they have an Alpheid after hearing repeated, sharp ‘pistol-like shots’ coming from the tank. After the initial fear of the glass breaking the aquarist usually tries in vain to find the creature responsible. Pistol or ‘snapping shrimps’ as they are also called, are amongst the loudest creatures in the oceans. The creature snaps shut a specialised claw which creates a bubble, capable of travelling at over sixty miles an hour which releases a sound that has been registered at over two hundred decibels. This pressure can kill small fish and is part of the shrimp’s hunting and defensive technique.

Many Alpheids form symbiotic relationships with gobies (a group of fishes from several genera, which all tend to be lumped together as ‘shrimp gobies’. This display of mutualism is fascinating to watch, with the shrimp maintaining a burrow which the goby lives in and defends. Shrimp/goby pairs are often available from retailers, though many aquarists receive their pistol shrimps as hitchhikers on live rock. Alpheids are generally nocturnal and prefer dimly lit tanks, though I’ve seen several in dealer’s tanks, and some in the wild, that are visible during the day.

If you plan to get a shrimp/goby pair you will need a deep sand bed, to allow the shrimp to dig and rockwork that will not collapse if undermined. Whilst reports of pistol shrimps killing their tank mates are rare, it cannot be ruled out.

These two truly are the ‘dandies’ of the shrimp world, with spectacular colouration and almost ludicrously shaped claws and other appendages. The two species are very similar, but differ in their geographical distribution which has allowed them to diverge from a common ancestor. H. picta is collected from Hawaii whilst H.elegansis found throughout the Indo-Pacific. H.picta tends to have a lot more purple-orange than H.elegans. The species you buy will depend on where the importer sources their stock. Care requirements are the same for both. 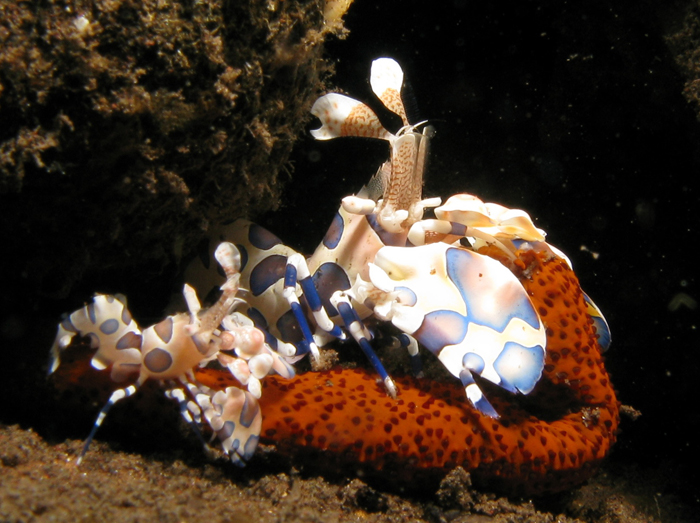 Harlequins, whilst spectacularly coloured can be difficult to maintain, due in no small part to their very restricted diet, nothing but sea stars will do. Chocolate chip star fish (Protoreaster nodosus) are frequently bought and fed to shrimps, though many aquarists might consider it either too expensive or unethical to feed live creatures to others. Needless to say, don’t introduce harlequins to a tank with star fish, your Linckia will not last long. 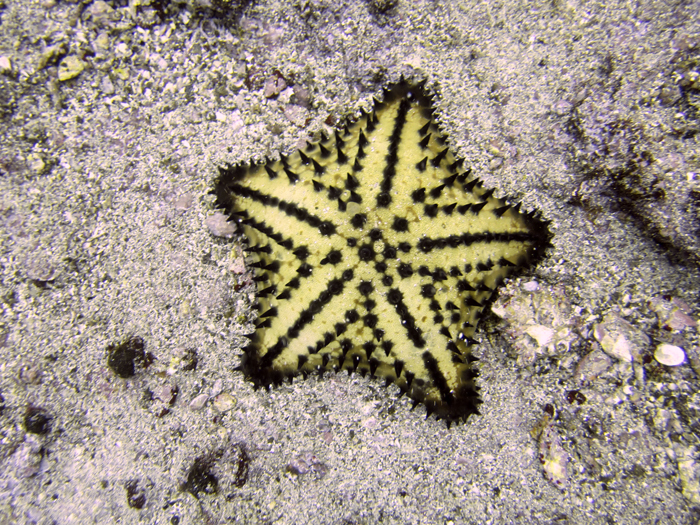 Harlequins are best kept as pairs in species tanks (they will fall prey to many predatory fish species) and make ideal subjects for nano tanks (they reach 5cm when fully grown), though filtration will need to be good to remove starfish detritus.

The Cleaner Shrimps, Lysmata amboinensis and L. grabhami are the most commonly kept shrimps in aquaria. They are very similar species, separated by geography: L. amboinensis comes from the Indo-Pacific and L. grabhami from the Caribbean. They can be told apart by looking at the tail. L amboinensis has a wedge of white on the tail fin and white dots on the front and rear of the fan on each edge.L. grabhami has a thin white strip along each outer edge of the tail. Both reach about 5cm long (head to tail), their care requirements are the same. The Lysmata genus contains several other shrimps of interest to the aquarist, which we’ll come to later. 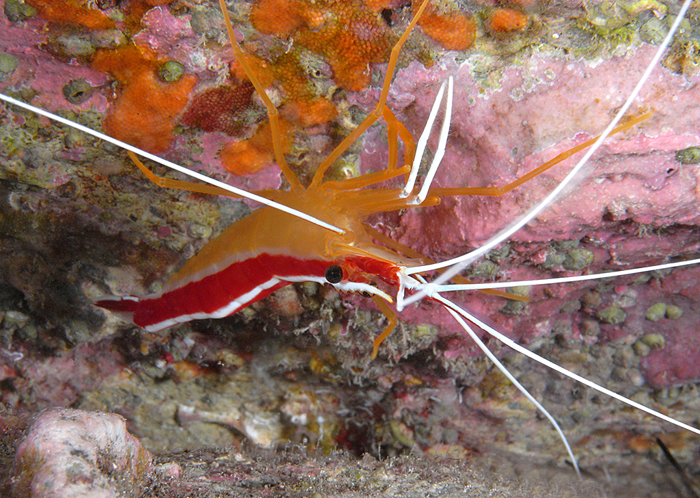 Cleaner shrimps offer some fascinating behaviour, in doing what they do best – cleaning. Watching them crawl over a large fish looking for dead skin and parasites is very interesting as the shrimp explores the fish’s mouth, gills and skin. Cleaner shrimps can be very useful in helping fishes such as Tangs (which are prone to skin infections), though I wouldn’t rely on shrimps to be entirely responsible for dealing with infections like marine white spot (Cryptocaryon).

Cleaners are very good at scavenging and, if my pair are anything to go by, are very good at catching floating food particles such as flake and Mysis shrimp: feeding them is rarely an issue. They do have the annoying habit of stealing food from sessile invertebrates and can drive the owners of LPS corals crazy as they reach into the creature to remove choice morsels. When this happens a shield for the coral can be fashioned from a pop bottle to keep the shrimp out –and allow timer for the coral to ingest fully the offered food. 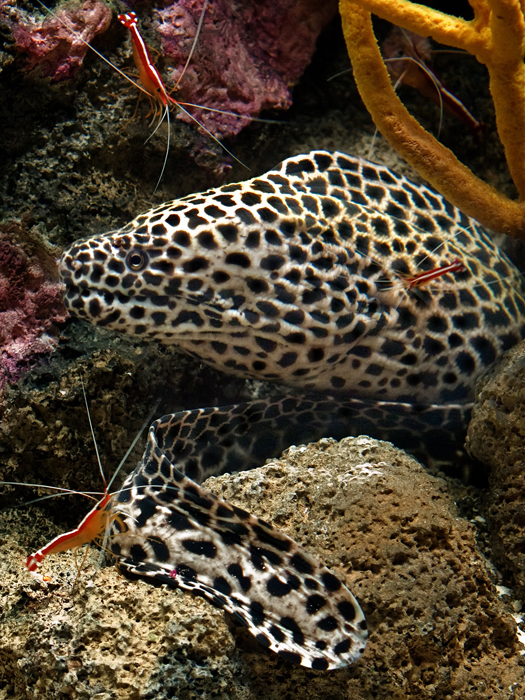 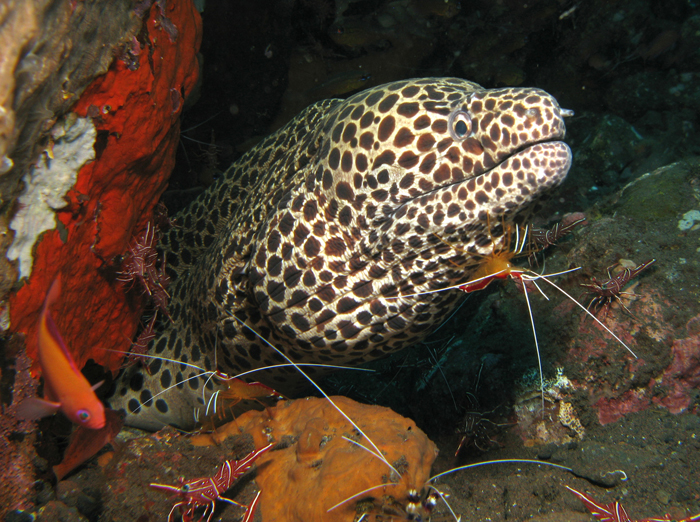 Cleaner shrimps are readily available and quite cheap; they are hardy and make great aquarium residents. They are more active at night and welcome shaded areas and overhangs where they set up their ‘station’. If you plan to keep more than one shrimp (pairs are ideal) I would add them together and as ever with invertebrates, don’t rush the acclimation procedure. Also make sure your fish aren’t active predators on shrimps; triggers, groupers and some Dottybacks will thank you for a quick meal.

Peppermint shrimps, like other member of the genus are ideal reef tank inhabitants, though like their cousins, they may annoy some corals, anemones and other slower feeding invertebrates by stealing food from them. L. wurdemanni is though quite reclusive and will find shelter in the rockwork for most, if not all of the day; indeed, some aquarists may never see their peppermints. The chief reason peppermints are added though is for their liking for Aiptasia anemones. Aiptasia anemones are major pests of some reef tanks, can spread rapidly and sting other tank inhabitants. Several proprietary products are available to kill them, some aquarists blast them with kalkwasser solution and even lemon juice, whilst others swear by L. wurdemanni, which are credited with clearing Aiptasia infestations in a matter of days. 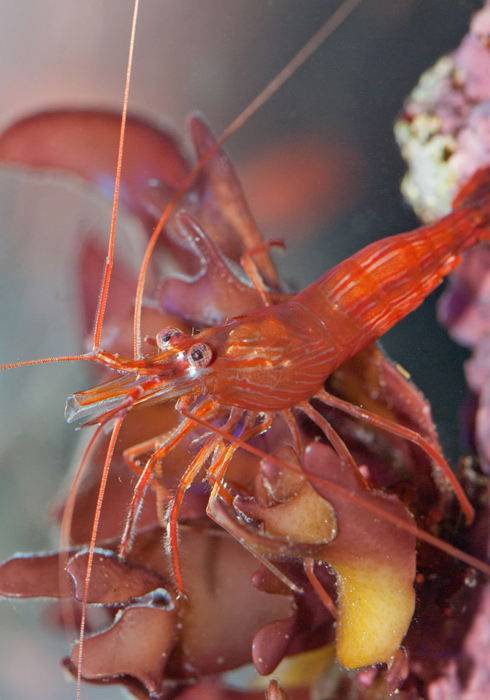 A similar species (L. californica), the Catalina Cleaner Shrimp is similar in appearance but is not suited to the warm temperatures of reef aquaria and should be avoided.

Sexy shrimps are likely to be the smallest marine shrimp you will keep on purpose, at two centimetres long. Some hitchhikers and species that are commensal with clams for example are much smaller; to the extent you might not even notice them. They are wonderfully coloured, with white and tan patches on their translucent bodies. They also have a great way of ‘shaking their backsides’ in a ‘provocative’ way which gives them their name. 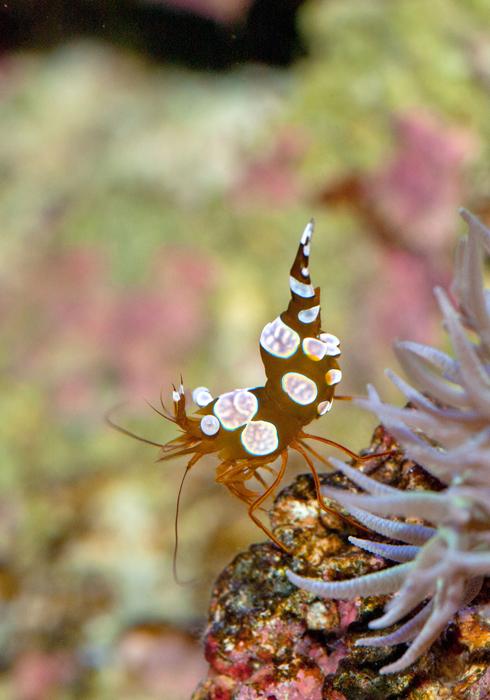 In the wild, the species lives on anemones in groups of several individuals and if you intend to keep some I would recommend three or more. Sexys are great for the new breed of nano tanks and due to their small size the scale of the aquascaping in such small tanks can really focus the aquarists’ attention on the smaller details.

Sexys can be added to larger systems, but doing so incurs great risk as the creatures are likely to get eaten or lost in the rockwork and you will rarely see them. Adding a group to a tank with anemones could make an interesting display, but if you have clown fishes, they will drive the sexy shrimps away. Sexys will feed on a wide range of foods and won’t be difficult to keep

Keen fans of scientific names will notice that the sexy shrimp’s specific name, amboinensis is the same as for the cleaner Lysmata amboinensis. This name refers to the first scientific description of the two species which came from the Ambon islands in Indonesia.

This shrimp from the Indo-Pacific is a real beauty with its blood red body, white spots and bright white legs. 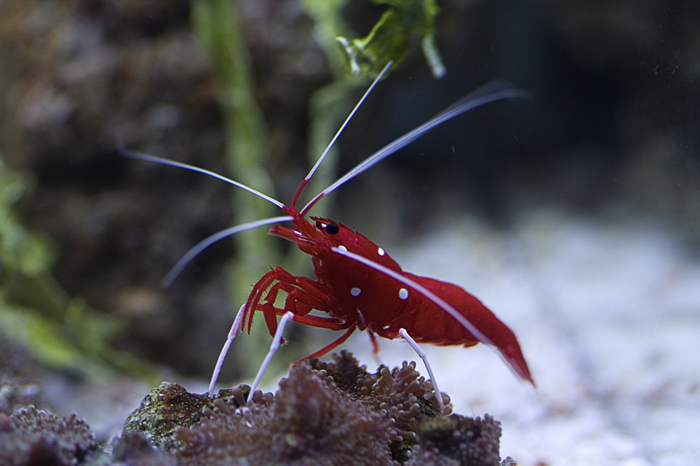 As with the other shrimp in the genus it easily finds food. Sadly, it is very often nocturnal and reclusive, though careful construction of rockwork may provide it with a cave or overhang which it can shelter in and remain visible. It will on occasion provide cleaning services to fishes.

Commensal shrimps are typically small and often overlooked and are mainly from the Periclimenes genus. The Periclimenes genus (within the Palaemonidae family) has a large number of species within it that live symbiotically with a wide range of marine organisms. They are found mainly in anemones, but also within Tridacnid clams, on sea fans (Gorgonians), in sponges, sea urchins and on a wide range of corals. Some such as Periclimenes imperator live in the tentacles of sea cucumbers and on the bodies of sea slugs.

Some species of shrimp which host on anemones have been credited with feeding on the anemone itself or the anemone’s mucus. Several species offer cleaning services and advertise their ‘trade’ with a side to side movement of their front claws/legs. I’ve tried to photograph them frequently in the wild only to have them try to clean the camera’s lens port; I guess it must look like a large mouth! 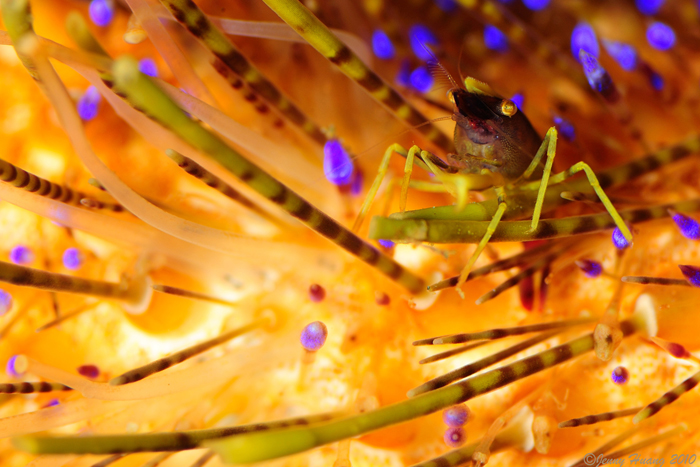 Periclimenes species are occasionally imported (or arrive as hitchhikers) and can make fascinating aquarium residents. A few Periclimenes shrimps kept in a nano system along with a small anemone would make an interesting feature. 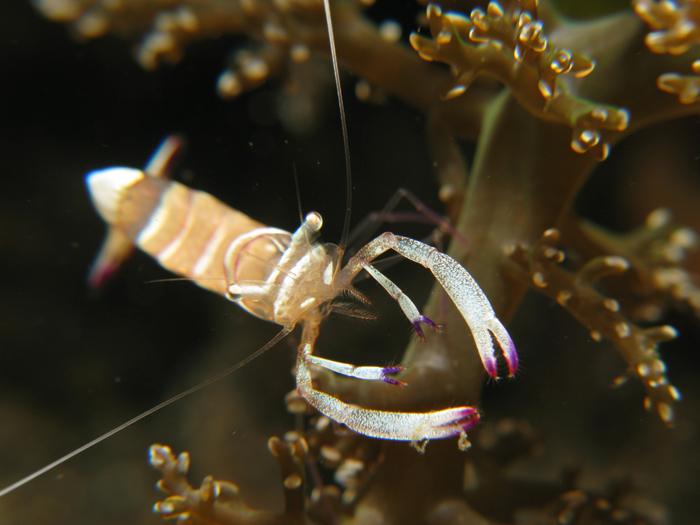 There are six species within this genus that are imported under the ‘Dancing shrimp’ name. The obvious hump on their backs gives them the ‘Camel back’ name. 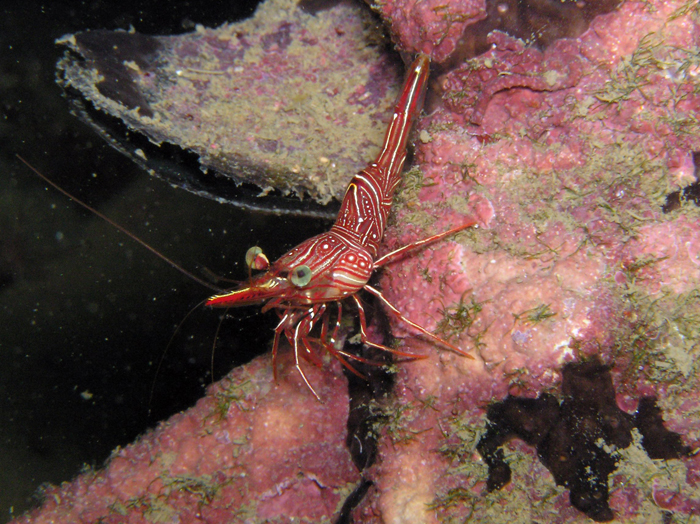 Dancing shrimps have the reputation for eating corals especially zooanthids and star polyps, which is a shame as they have very attractive patterning. This unwanted behaviour isn’t reported by all aquarists and may be determined by availability of food in the tank and individual preferences of the shrimp, so you may have no problems with keeping them. 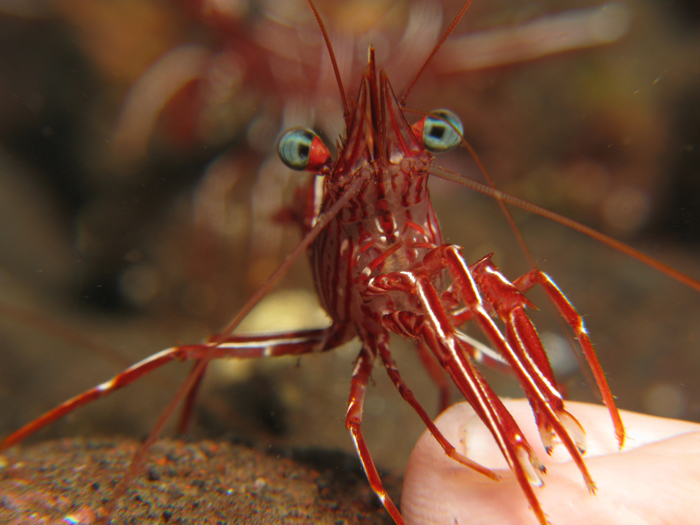 Again these species are more active at night and welcome areas of overhang in which to shelter. Their name comes from their curious ****y way of moving.

There are several shrimps then that can be kept in a mixed reef, with no problems and several that would be better kept in a species aquarium, with the Sexy shrimp making a fantastic exhibit in a nano system.
With careful acclimation and a little bit of research shrimps can make great aquarium residents.