This article reviews the last of the 150W double ended metal halide lamps tested for their performance and spectral output. Table 1, provides a complete listing of the lamps and ballast combinations test. Included in the tests in the new electronic ballast, sent to me by Current USA. The Iwasaki Kr85 is often sold listed as 50000K lamp. Double ended lams are recommended to be used in enclosed fixtures with a glass shield. Hence these lamps were tested with and without a glass shield. The Icecap lamps represent the new series of lamps. 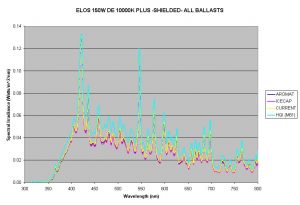 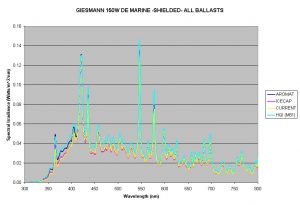 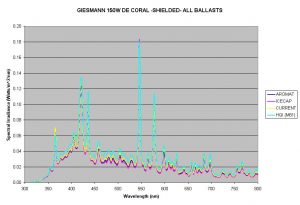 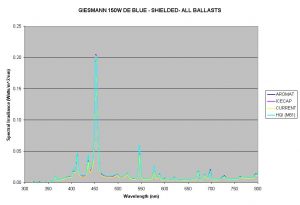 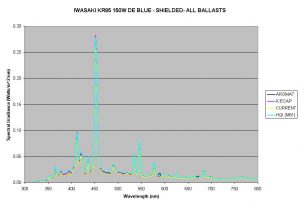 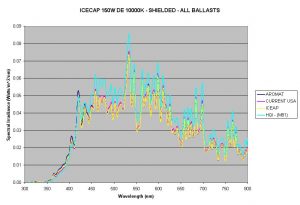 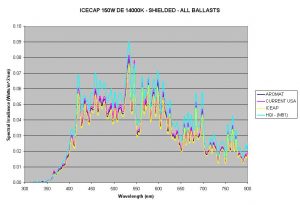 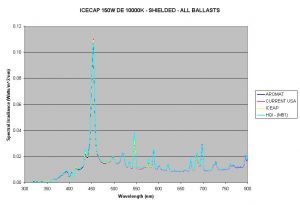 Figures 7 and 8, and Tables 10,11 and 12 compare the Photosynthetic Photon Flux Density (PPFD) and Correlated Color Temperature (CCT) of the unshielded lamps tested here against all the 150W DE metal halide lamps tested. The Elos 10000K plus and Giesmann Marine are very similar in output and CCT. The Icecap 10000K lamps have output comparable to the middle range lamps, and generally have higher output than the Giesmann and Elos lamps on comparable ballasts. However, the CCT for the Icecap lamps is lower than the Elos and Giesmann lamps. In the 14000K category, the was only one prior lamp to compare against – the Aquaconnect 14000K. Both the Icecap and Giesmann lamps have higher PPFD, with the Icecap being the highest. However, the high output is at the cost of much lower CCT, in the 6000K range, making these lamps appear more yellowish. In the 20000K category, both the Giesmann and Icecap come out in the low end of PPFD for the 20000K lamps. The Icecap lamp had a PPFD in the 45000K-58000K range indicating that it may be less blue as compared to the other “20000K” rated lamps which have a CCT that cannot be determined due to the predominance of blue. The Iwasaki Kr85 lamp is usually sold in the aquarium hobby as a 50000K lamp. The spectral plot of this lamp indicates that it will appear quite blue, and it differs from the Icecap and Giesmann Blue lamp since it has extra output in the actinic range (420 nm). As for the PPFD output, its is quite low and would place it in the bottom of all the 20000K lamps tested. The Current USA electronic ballast is similar in performance to the other electronic ballasts. 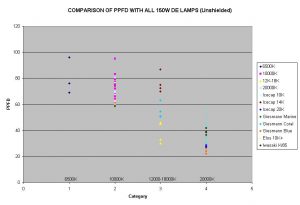 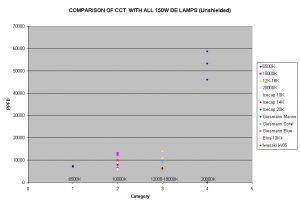