The popularity of double ended (DE) metal halide (MH) lamps is on the increase. Their compact size and the availability of attractive luminaries such as the Aquaspacelight by Aqualine Buschke, the Nova by Giesmann and others adds to the aesthetic appeal of reef lighting. In this article, the eighth in the series [1-7], we present a comprehensive evaluation of several 250W double ended lamps and the ballasts available to drive these lamps.

Four 250W DE metal halide lamps available within the reef hobby were evaluated along with the ballasts used to drive these lamps. The ballasts tested represent a selection of electronic and magnetic ballasts that are available to a reef aquarist, and were available to us at the time of testing. Table 1 below shows the lamps and ballasts used for this study. The magnetic ballast used for these tests was a “PFO-HQI” ballast which essentially is an ANSI-M80 ballast. The Icecap and LampsNow (from Hellolights.com) ballasts are electronic ballasts. The Giesemann is also an electronic ballast and the one used for testing the lamps was removed from a Giesemann Nova II setup.

In an effort to test the double ended lamps in a manner similar to our tests of the mogul based lamps and to allow one to compare their values to those of mogul based lamps, we used a bracket that enabled us to suspend the bulb in space interfering minimally with the light emitted from the lamp. This was identical to the setup described in the previous article on 150W DE lamps (add reference), and no reflectors were used.

The data collected is presented as follows: The spectral data and light output for each of the lamps is first compared using a common ballast. This allows for direct comparison of the spectral differences between each lamp. The next section presents the data for each lamp when used with different ballasts. 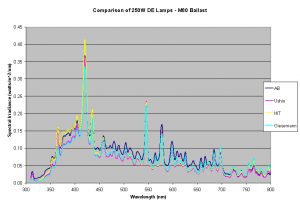 Figure 1: Spectral Plot Showing A Comparison Of The Spectrum All The 250w De Lamps Tested

Since the ANSI-M80 is the recommended ballast for 250W double ended lamps, we decided to compare the lamps using this ballast to establish a baseline of performance.

Figure 1 below shows the spectral output of the four different lamps when operated by the same ballast – the M-80 ballast. These spectral plots are for the unshielded lamps (i.e. without the use of any UV absorbing glass shield).

As seen from the spectral plots and the data in table 2, the differences between the Ushio, Giesemann, and HIT lamp is quite small, with the AB outperforming the others in terms of PPFD (Photosynthetic Photon Flux Density), but having a lower correlated color temperature (CCT). This higher PPFD of the AB lamp is primarily due to the slightly higher output in the 450-700 range which also accounts for the lower CCT. These lamps all have a CCT close to the advertised 10000K with the HIT lamp having a slightly higher output in the blue end of the spectrum which lead to a higher CCT.

Manufacturers recommend that these lamps be used in a fixture with a UV absorbing glass shield. To determine the impact of using a glass UV shield with double ended lamps, the lamps were also tested with a glass shield placed over the sensor. This glass shield was removed from a PFO Lighting’s double ended fixture. The figures 2 and 3 show the impact of the UV shield on the lamps’ spectral output, using the AB lamp as an example.

All the lamps were tested with and without the UV glass shield, and the difference in light output due to this is shown in Table 3 and Figure 4 . 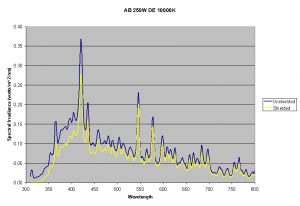 The use of the shield resulted in an average drop of approximately 18% in PPFD. This reduction in output is pretty consistent across all lamps. Also, as seen from the spectral plot of the shielded vs unshielded AB lamp, about ½ this drop in output is in the blue/green end of the spectrum (400-550 nm). Also there is a significant drop in the UV end of the spectrum (below 400 nm), as expected from the UV absorbing glass.

In this section we present the results of testing the different lamps using different ballasts. For each lamp tested different ballasts were used to fire the lamp and data is presented for the unshielded and shielded case. Spectral data is only provided for the shielded case, since we feel that most lamps will be used in this manner. Unfortunately, a full combination of each ballast with each lamp was unable to be performed due to the fact that these tests were done at different times and not all ballasts and lamps were available simultaneously. Some lamps and ballasts were on loan and had to be returned, making them unavailable for subsequent tests. 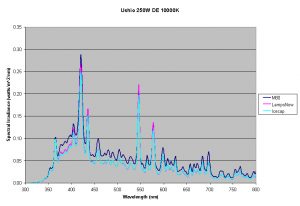 Figure 3: Spectral Plot of the Shielded Ushio Lamp with the different ballasts

This lamp, manufactured by Aqualine Bushke and sold in the US through Aqua Medic, is another very popular lamp in the hobby. From Tables 6 and 7 and Figure 5 it can be seen that the 2 electronic ballasts the Icecap and LampsNow drive the lamp almost identically, where as the Giesemann ballast and the M80 have almost identical output, even though the Giesemann ballast has a much lower power consumption. 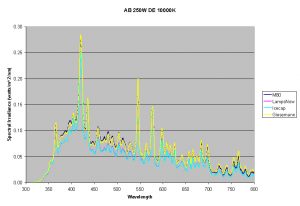 Table 8 and 9, and Figure 5 show the results of the HIT 10000K lamp. Again the magnetic ballast shows the highest PPFD output, with a similar relationship to PPFD output and input power. This lamp has a higher CCT than all the other lamps in this class. 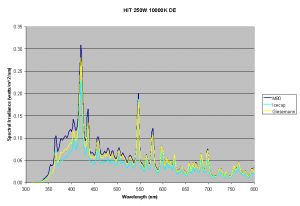 Table 10 and 11, and Figure 6 show the results of the Giesemann Megachrome 10000K lamp. Again the magnetic ballast shows the highest PPFD output, with a similar relationship to PPFD output and input power. 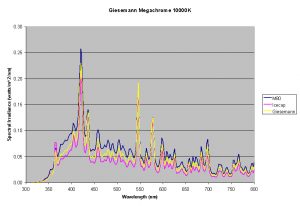 The 250W DE lamps tested in this article are all quite similar in spectral characteristics, with some small variations. Whether these differences are intrinsic to the lamp design, or a function of variability within a product is hard to determine from this data, especially since its based on a sample size of one. 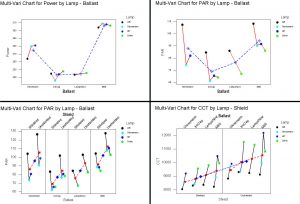 Figure 7. Multivariate Charts For The Different Ballast And Lamp Combinations

Overall, these lamps are quite excellent in terms of PPFD output as well as the color temperature of these lamps.

The 400W Ushio 10000K lamp is a very popular 10000K and it would be interesting to see how these 250W DE 10000K lamps compare to this lamp. The data for this lamp was presented in [6]. Figure 8 shows the plot of the PPFD of the various 250W DE lamps (unshielded) as compared to the 400W Ushio on different ballasts. Spectrally, the DE lamps have smaller spikes at 546 and 578nm, and thus have a higher color temperature than the 400W Ushio lamp. 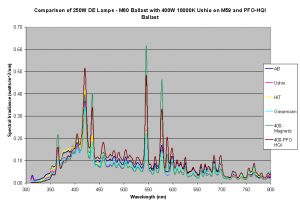 Figure 9 shows the PPFD values for the unshielded 250W DE lamps as compared to the USHIO 400W lamp. It is very interesting to note that the PPFD values for the unshielded 250W DE lamp with the M80 ballast are about the same as that of the Ushio 400W on a standard ballast or a pulse start ballast, with much less power consumption. With the “HQI” ballast on the 400W Ushio the light output is higher but so is the power consumption. The most PPFD for the USHIO 400W lamp was with the PFO HQI ballast (165) where as the most for the 250W DE lamps was with the AB lamp (128), however the Ushio 400W consumed 512W of power, where as the 250W AB lamp only consumed 304W of power. The difference in PPFD is 37 units where as the difference in power is 208W. Combine this with the fact that the reflectors for the 250W DE systems are much better given the smaller size of the lamp, I am starting to believe that the 250W DE 10000K lamps are a better option for most mid size tanks. The difference in intensity caused by the glass shield (about 18%) as shown earlier, can easily be offset by lowering the lights by an inch or two.

Using a 400W lamp over a 250W lamp one would expect to see about 60% increase in PPFD, but clearly this is not the case based on the lamps tested. Given the costs of electricity in most places, I think its time for aquarists to seriously reconsider the use of 400W 10000K lamps. 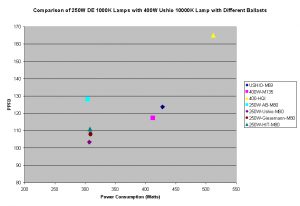 We would like to thank several people whose help made this study possible. They were kind enough to provide us with lamps and ballasts for testing: Patrick at PFO Lighting, Brian at HelloLights.com, Aqua-Medic, Andy at IceCap Inc, Phil from Giesemann. Finally, we would like to thank Dr. Paul Walker of Penn State University for the use of the spectroradiometer and dark room for testing the lamps. Thanks to Mike Boenisch for creating the graphs shown in figure 7.