During the last year several new metal halide lamps have made it into the market, at prices that are quite attractive. One such set of lamps is the XM series of lamps marketed by Hellolights.com, another is the 13000K lamp marketed by PFO Lighting. Additionally there has been a lot of speculation on the use of Radium lamps driven by the “HQI” ballast. 2 other lamps not previously reviewed are also included here: the Osram 20000K and the Venture Sunmaster Cool Deluxe. The Sunmaster is a lamp popular with the pubic aquariums. These lamps were tested with 4 different ballasts as listed in Table 1.

The magnetic ballast used was the Magnetek F-can ballast (ANSI-M59) and the Pulse start ballasts used was the Venture Pulse Start Ballast (ANSI-M138). Although, there are special Pulse Start metal halide lamps designed for these ballasts – these ballasts can also be used for standard metal halide lamps (although the benefits of the pulse start lamp will be lost. http://www.venturelighting.com/TechCenter/Faqs/tech_center_faq.htm.

For each lamp/ballast combination listed, data was collected on the Spectrum, Photosynthetic Photon flux Density (PPFD) or PAR, as well as data on the power consumption of the ballasts. The power consumption was determined using a Vector True RMS power meter into which the ballast was plugged. The Vector power meter also records the voltage and current. The test setup used was the same as previous lamp tests [1], thus allowing for direct comparison of the results of these lamps with previously tested lamps [1-4].

This is a new lamp introduced by Hellolights.com. As seen from the Table 2 and Figure 1, this lamp provides considerable amount of PPFD, and performs quite well on the standard M59 ballast. The output is quite similar with the M59 and pulse start ballast and is higher for the “HQI” ballasts, at the cost of more power consumption. The Correlated Color Temperature (CCT) of this lamp is excellent and exceeded the advertised 10000K, and interestingly was higher with the “HQI” ballasts. 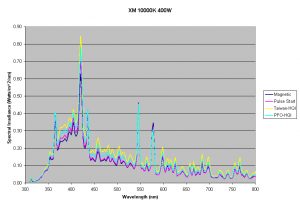 Along with the XM 10000K lamp, Hellolights.com also introduced a new lamp labeled as 20000K. As expected this lamp has a large spectral peak at 454nm (Figure 2) and as shown in Table 3 this lamp performs best with a M59 ballast. When used with the PFO-HQI ballast, the performance was slightly lower. 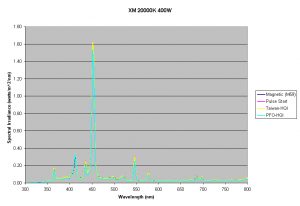 The Radium 20000K lamp is very popular with a large section of the reefkeeping population. These lamps are European lamps and it is quite likely that we do not have the appropriate ballast to run this lamp. It has been reported by many that to get a “whiter” look from this lamp with a predominant output at 454 nm it should be driven by a PFO-HQI ballast. As seen from the data in table 4, the PFO-HQI ballast does tend to drive this lamp so that it provides more PPFD than any of the other ballasts. The increase in PPFD is about 60% when compared to a standard M59 ballast. It has also been reported that the standard M59 ballast has trouble igniting this lamp, and hence a Pulse Start ballast may be more suitable. As seen in figure 3, the PFO-HQI ballast does increase the output at almost all wavelengths, but again at a higher power usage. The lamp output is similar with the standard magnetic and pulse start ballast. 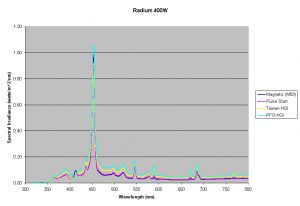 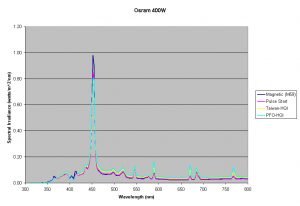 The Sunmaster Cool Deluxe is a lamp marketed for horticulture and is quite popular with the public aquariums. The output is concentrated at specific wavelengths with very low output at the other wavelengths as seen in Figure 5. This lamp also provided the most PPFD when used with the PFO-HQI ballast. This lamp is marketed at a color temperature of 6500K, but as computed from the spectral plot, the CCT is closer to 10000K when used with the standard magnetic ballasts (table 6). 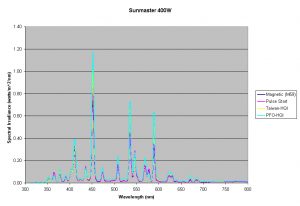 This is a new lamp introduced by PFO Lighting and labeled as true 13000K. As seen from the spectral plots in Figure 6 and Table 7, and output is spectrally quite similar to a Radium or Osram Lamp. 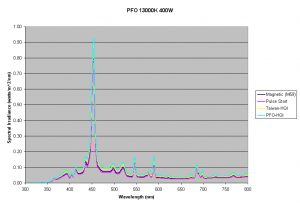 Comparison Of The Lamps

Figures 7, 8, 9, 10 show a comparison of all of the lamps. The Ushio 400W lamps is also included here as a reference since it is quite popular among aquarists using 400W 10000K lamps. Figure 7, provides a comparison of these lamps when used with different ballasts. As seen from this figure, the XM 400W 10000K has the most PPFD independent of the ballast used. For all lamps, other than the XM 20000K lamp, they had higher PPFD when used with the “PFO-HQI” ballast. Figure 8, shows the plots of power consumption and PPFD for all the lamp ballast combination tested in this article. Figures 9 and 10 show the superimposed plot of the spectrum of all lamps on the M59 and PFO-HQI ballast. It can be seen from this plot, that the XM 10000K lamp has the highest output of lamps in the 420 nm (actinic) wavelength, along with higher wavelengths in the blue region and also in the UV region (below 400nm). The Radium, Osram and PFO 13KK lamps all have a very similar spectral output, with the XM 20000K having the highest PPFD output in this class of lamps. 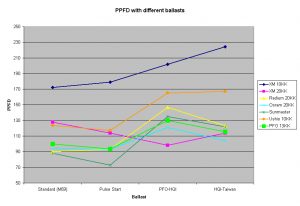 Figure 7: PPFD of all lamps with different ballasts 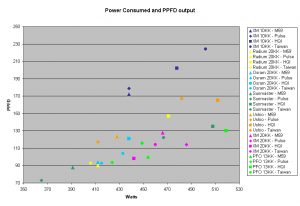 Figure 8: PPFD vs Power Consumed for all lamps with different ballasts 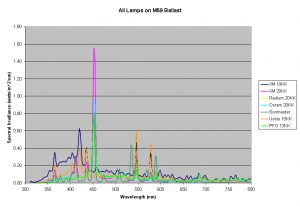 Figure 9: Spectral Plot of all lamps on M59 ballast 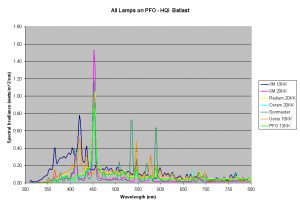 Figure 10: Spectral Plot of all lamps on PFO-HQI ballast

As seen from the data and plots, the XM 10000K is a very good lamp with high amounts of PPFD and spectral plots when compared to the Ushio 10000K but with higher outputs in the UV 310-400nm. The XM 20000K lamp is very similar to the Radium and Osram 20000K lamps, and has a higher peak than these at 454 nm, but with lower outputs in the other wavelengths, thus its quite likely that this lamp may appear bluer than the Radium or Osram. How long these lamps retain their PPFD output remains to be seen. The PFO 13000K lamp is very similar to the Radium and Osram lamps and similar to these lamps produces most PPFD when used with the PFO-HQI ballast. It is worth repeating, that this data is based on a sample size of one, and we have no idea what the variation is within lamps. It would be useful to get some idea of what the acceptable production variation is given that we know no two lamps coming off the same line will be identical in output.

We would like to thank several people whose help made this study possible. They were kind enough to provide us with lamps and ballasts for testing: Patrick at PFO Lighting, Brian at HelloLights.com, Brad Shaw and Perry at Sunlight Supply, Leonhard Ho for the use of his Taiwan “HQI” ballast, and Brian Nelson for the Osram Lamp. Finally, we would like to thank Dr. Paul Walker of Penn State University for the use of the spectroradiometer and dark room for testing the lamps.