Recently Marine Depot (www.marinedepot.com) introduced a new line of AquaMaxx 14000K lamps. The lamps are available in 400W, 250W and 175W mogul versions, as well as 250W and 150W double-ended versions. These lamps were sent to me curtsey of Marine Depot. This article presents a review of the spectral analysis and light output of these lamps when used with a wide variety of ballasts. Table 1 presents the list of lamps and the ballasts used to test the performance of these lamps.

This section presents the results of testing the different lamps when used with different ballasts. The data is obtained in an identical manner, using the same set of instrumentation and distance (18″ from the center of the lamp to sensor) thus allowing for direct comparison between these lamps and all others tested and reported on in my earlier articles and subsequently archived on the website (http://manhattanreefs.com/lighting ). 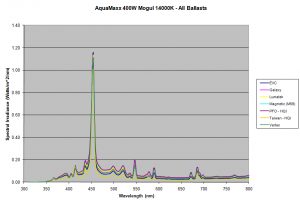 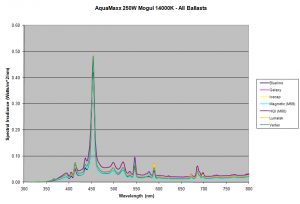 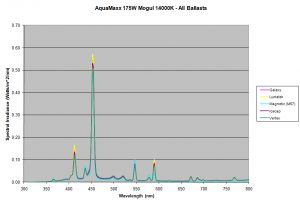 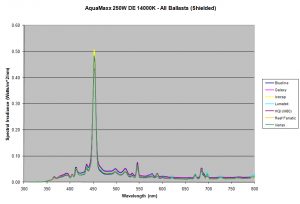 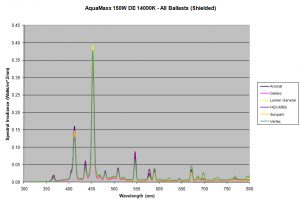 Figure 6 shows a comparison of the spectral outputs of all the highest output combinations of the AquaMaxx lamps and the ballasts used for testing. From the spectral plots at first glance it seems that the spectral output of these lamps shows similar characteristics of the lamps sold in the hobby with the “20000K” label. 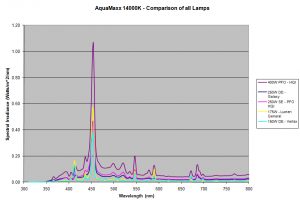 Figure 6: Comparison of the Spectral Plot of all the AquaMaxx 14000K Lamps

Given that the spectral plots look very similar to the blue (“20000K”) lamps, the 400W AquaMaxx was compared to a Radium 400W – both running on a PFO HQI ballast. Figure 7 shows the spectral plots of the 2 lamps – and as is clearly obvious the output is almost identical to that of the Radium along with very similar PPFD values (142.8 for the Aquamax and 147 for the Radium). This lamp would make an excellent substitute for those that are currently running Radium lamps and at a significantly reduced cost. 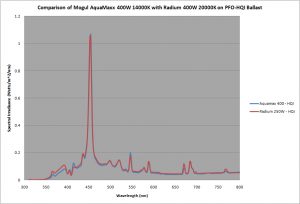 When comparing the AquaMaxx 250W mogul version to a Radium the predominance of blue at 454nm is quite obvious (Figure 8). However in this case the AquaMaxx lamp has an output that is about 19% lower that that of the Radium lamp when both are fired using the same HQI(M80) ballast. 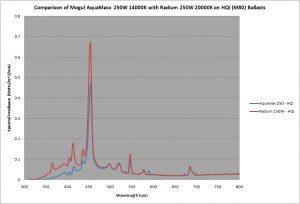 The 150W Double Ended AquaMaxx lamp has a spectral output that is different from that of the 150W Double Ended Radium lamp, with the AquaMaxx showing increased output at 420nm that is lacking in the Radiums (Figure 9). The AquaMaxx lamp in this case also has a higher peak at 454 nm, but the overall output is much lower for most of the other wavelengths accounting for its much lower PPFD (almost 40% lower). 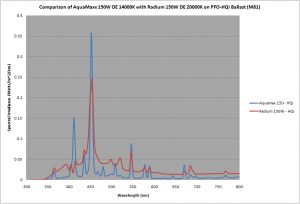 The 250W Double Ended and 175W Mogul AquaMaxx lamps do not have any Radium counterpart, hence the highest output ballast and lamp combinations were compared with other commonly available highest PPFD output lamp and ballast combinations. The 250W AquaMaxx is compared to the EVC 250W 20000K lamp and the spectral plots are shown in Figure 10. The PPFD output of the AquaMaxx lamp is about 16% lower. 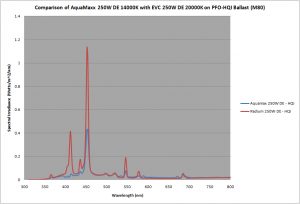 The 175W AquaMaxx lamp on the Galaxy electronic ballast is compared to the XM 175W 20000K lamp on a standard magnetic ballast (M57) and the spectral plots are shown in Figure 11. The PPFD output of the AquaMaxx lamp is almost 25% lower. 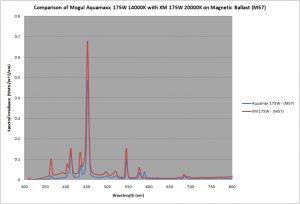 In conclusion, I feel that hobbyists considering these lamps should evaluate them as “20000K” lamps to bring them more in line with what the aquarist is likely to see in terms of color and performance. The AquaMaxx 400W lamp is an excellent replacement for the Radium lamp. As for the other wattages, these have performance very similar to the middle of the pack lamps in their respective categories and at comparable prices.