The Best Lamp Is…

Debates about ‘the best light’ for illuminating reef aquaria have raged among hobbyists for years. There has been little doubt that corals, as a group, can adapt to varying degrees of light intensity and spectral quality. The proof has been obvious to veteran hobbyists, especially those who remember the early days of the hobby when a metal halide with the ‘warm’ Kelvin rating of 5,500 was considered to be on the cutting edge of technology and could maintain a number of coral taxa alive within captive environments. Since those days, of course, there have been many innovations introduced into the aquarium lighting arena and these have only added to the number of arguments. Fortunately, researchers have recently generated statistically significant data concerning the effects of different spectral qualities on coral growth and longevity. This article will review this information, and will offer further data in support of a pet theory of mine – the ‘red
light theory.’

Recent research has suggested a ‘best lamp’ – but some caveats exist! Only metal halides were used, and apparently the sample size was small (2 lamps each of 4 various Kelvin ratings). No other types of lamps were tested (i.e., fluorescents, LEDs, etc.). One coral species – an Acropora species collected from approximately the same depth on the same reef – was used in the experiment. In addition, the coral fragments were attached to two different substrates (marble and cement). With this in mind, we can examine these experiments and their results. 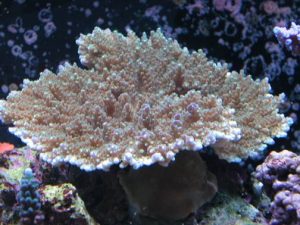 These researchers presented their results in two main categories: Growth rates and survival rates. I’ve chosen to examine results of growth rates, and for these reasons.

Anyone familiar with ‘fragging’ corals knows that, even under the very best of circumstances, survival of corals after fragmentation sometimes seems to be due to the fickle hand of fate. The amount and quality of light and water motion will surely play a part in determining the ultimate fate of broken corals as they adapt to a new environment, as will be amount of trauma suffered during the fragmentation process. With this said, I’ll assume that we cannot assign losses to lighting issues alone, and have chosen to look at the long term effects of lighting and how it affects coral growth rates. It should be noted that these researchers felt the type of substrate played a marginal role in determining survival rates. With this said, Figure 2 shows the growth rates of Acropora solitaryensis during the third month of the Schlacher et al. experiments. 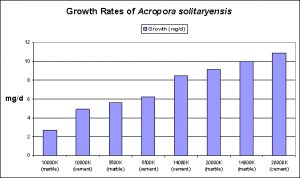 Figure 2. Growth rates of Acropora solitaryensis during the third month of the experiment, listed by lamp and substrate combinations.

Schlacher et al. (2007) presented their results but made no comments concerning possible reasons for observed differences in coral growth under different light regimens. There are several ways to examine the data, beginning with:

Overall Intensity of PUR Generated by the Lamps

Photosynthetically Usable Radiation (PUR), for our purposes, is that portion of Photosynthetically Active Radiation (PAR; those wavelengths of the violet to red portions of the visible spectrum) that is absorbed by one or more photopigments found in corals’ symbiont algae (zooxanthellae). Specifically, Schlacher and crew determined PUR through spectrometer measurements of each lamp’s spectral qualities (using the absorption bandwidths of chlorophyll a, specifically wavelengths of 400-450nm and 650-700nm). If PUR is the determining factor, we would expect to see growth rates producing increased growth (if there is no dynamic or chronic photoinhibition occurring) or decreased growth trending with the amount of PUR if photoinhibition is happening. We do not see a correlation either way, and I tend to discount PUR as the determining factor in these particular cases. See Figure 3. 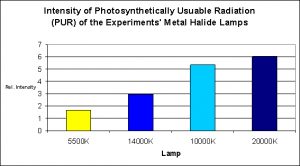 Blue Light Generated by the Lamps

If blue light were the deciding factor in promoting growth within the coral samples used in the experiments, we could expect a trend to fall along the blue light intensity of the various lamps. When we compare the amount of blue light (Figure 4) to the growth rates (demonstrated in Figure 2), we see no trend. 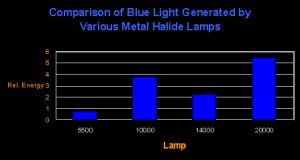 Red Light Generated by the Lamps

While no trend seems apparent with either PUR intensity or the amount of blue light generated by these lamps and Acropora solitaryensis growth rates, the same can not be said when we examine the amount of red light and how it correlates with coral growth. See Figure 5. The more red light a lamp generates correlates fairly well with low growth rates. 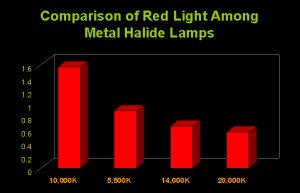 Hawaiian researchers, in the 1980’s, found that exposure to broad bandwidth red light resulted in low growth rates in corals (Kinzie et al., 1984). Further experiments (Kinzie and Hunter, 1987) found that corals exposed for more than 60 days to light composed of mostly the red portion of the spectrum resulted in corals that “…were almost entirely free of algae and appeared white, but retained complete coverage of living animal tissue. We have not been able to obtain this degree of bleaching with any other method, including prolonged shading.”

Results from further experiments would suggest that red light generated by light-emitting diodes (LEDs) can induce coral bleaching. Experiments conducted in early 2002 (see http://advancedaquarist.com/issues/june2004/feature.htm) demonstrated that narrow bandwidth red light produced by an LED in underwater housings caused bleaching in the stony coral Pocillopora meandrina. I conducted later experiments in 2004 that resulted in bleaching of an expanded selection of corals (including stony corals Porites, Pavona, Pocillopora and unidentified zoanthids – see Figures 6 and 7). 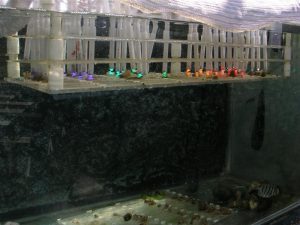 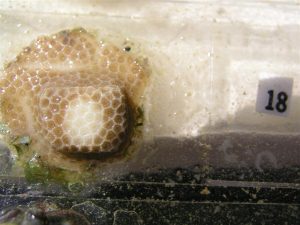 Figure 7. Effects on a Porites coral of light skewed towards the red portion of the spectrum as determined under the circumstances shown in Figure 6. Red light intensity was low at 160 µmol·m²·sec.

In light of the evidence, should we really be surprised that red light can possibly be detrimental to at least some corals’ zooxanthellae? Just a quick look at Figure 8 confirms that many corals are found in environments deficient in red light. ‘Strong’ red light is unnatural and seems to be a factor in regulating zooxanthellae density and/or pigment content. 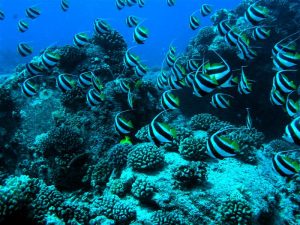 Figure 8. The blue waters of Kailua-Kona, Hawaii, at a depth of ~13 meters.

The work of Schlacher, Stark and Fischer is important, and a great stride in improving our understanding of the effects of artificial light on coral growth and survival.

However, we should remember that these results are from experiments with a single species collected from a specific depth and geographical location. This information may, or may not, be applicable to other corals. Clearly, more research is needed, but this does not lessen the importance of these researchers’ results.

In addition, we should also note that Kelvin ratings are a poor indicator of true spectral quality – that is, it is a mistake to judge the ‘warmness’ or ‘coolness’ of a lamp when Kelvin is based on measurements made of lamps possessing ‘spiky’ line spectra such as mercury vapor or metal halides.