The Georgia Aquarium: Setting a New Benchmark for Public Aquariums 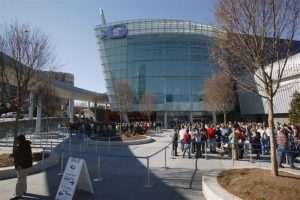 The front entrance to the Georgia Aquarium.

Americans aquarists are fortunate to have access to some of the world’s finest public aquariums. Most regions of the Country have at least one world class aquarium if not several. The Shedd Aquarium in the Midwest, Long Beach, Steinhart, and Monterey Aquariums on the West Coast, the New England Aquarium, and the list goes on and on. Onenotable exception has been the Southeast. Tampa Bay and Charleston have major aquariums as does Virginia Beach. North Carolina has two modest facilities, but large portions of one of the fastest growing areas in the Country didn’t have easy access to a major Aquarium. That changed in Atlanta, Georgia on November 19th, 2005 when Billi and Bernie Marcus of Home Depot fame unveiled the largest indoor public aquarium in the world.

We aquarists probably more so than the typical visitor can appreciate the mind boggling numbers associated with being the largest aquarium in the world. The Aquarium is 500,000 square feet, the equivalent of over 50 football fields. It holds 8,000,000 gallons of water. More than 100,000 fish and marine animals are on display. The Aquarium’s filtration systems are spread over two stories of the half million square feet. Over two hundred pumps (and these are very large pumps) generate over 4,000 horsepower and push over 15 million gallons of water an hour through the system. It took 1.8 million pounds of sea salt to create artificial seawater for the saltwater exhibits. By every measure, the Georgia Aquarium is a public aquarium on steroids. 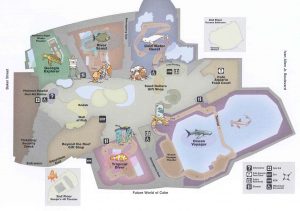 Map of the Georgia Aquarium.

Everything about the Georgia Aquarium is designed for maximum dramatic impact. One enters the building through a dim narrow passage lined with two tanks of Jacks. This narrow passage then opens into a huge three story sculpted atrium highlighted by strategically placed neon signs. The feel of the Aquarium is more like a modern shopping mall than a museum.

Standing in the atrium, one can view the entrances to all five major galleries, the café, and the gift shop. The five galleries are laid out as spokes of a wheel, all entered and exited from the atrium. Georgia Explorer exhibits animals found off the Georgia coast. It includes a ray touch tank and a mock shrimp trawler. Next door is River Scout where one can see Discus, Cichlids, Piranha, Arapaima, and even otters. The third gallery is called Cold Water Quest. The animals in this gallery would be the centerpiece at most public aquaria, but at the Georgia Aquarium, these magnificent animals almost get lost. A tour through Cold Water Quest begins with California Garibaldi and giant Spider Crabs. Next are the California Sea Lions and Sea Otters. A tank of Leafy and Weedy Sea Dragons offer a change of pace. A right turn, and one comes face to face (literally) with African Penguins. One more turn and suddenly the exhibit opens into a two story tank with four Beluga Whales. Playful and curious, these whales seem to study their human visitors as much as we study them. They think nothing of approaching within inches of the acrylic window and looking directly at people looking at them. The grace and ease with which they maneuver in the water can be hypnotic. As alluring as Cold Water Quest is, it is just an appetizer for the Georgia Aquarium’s main attraction, Ocean Voyager. 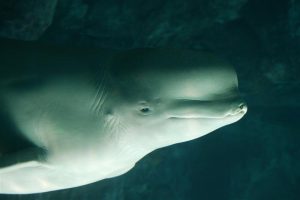 No description can capture the impact of seeing the Ocean Voyager display. Imagine a tank the size of a football field and 30 feet deep. The exhibit holds 6,000,000 gallons of water. The main viewing window is 63 feet long, and 28 feet high, and two feet thick. Ocean Voyager is an elasmobranch lover’s dream. Sawfish, Guitarfish, and Hammerheads and many other sharks and rays inhabit the tank each briefly appearing only to disappear into their 6 million gallon home. But the stars of the tank are the two 15 foot Whale Sharks. The Georgia Aquarium is the only public aquarium outside Japan to exhibit Whale Sharks.

The tank is so large that the Whale Sharks can swim freely and behave as they would in the open ocean. As one watches the Whale Sharks slowly glide past the 63 foot long viewing window, one senses that these animals are comfortably at home. Thousands of Pilot Fish swarm around the Sharks as they would in the wild, using the large animals for protection. Each Whale Shark is hand fed about 34 pounds of krill a day. Visitors can watch as handlers pour a bucket of krill into the water in front of the waiting shark so that the food can be scooped up by the approaching shark. 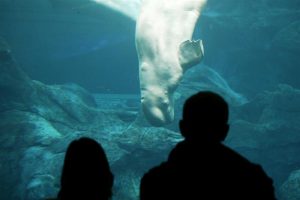 The next spoke of the exhibit wheel is the Tropical Diver displays. The first tank encountered is a modest display tank of Sweepers, a schooling fish commonly found in over-hangs. The tank is also home to a young Clown Trigger and dozens of other fish including garden eels. While this is only one of a series of tanks in the coral reef area, it invariably stops traffic. People line up three and four deep to get just a bit of what they are about to see as they move deeper into the Tropical Diver displays. Visitors then continue on through a dim serpentine hall with small tanks. After several turns along this carpeted path one steps into the centerpiece of the Coral Kingdom, a two story 160,000 gallon coral reef tank. The first shock is the brightness of the room. Walking through a dim hallway and then stepping into a well lighted room makes the first view of the coral reef that much more dramatic. The next thing a person notices are the fish. This reef tank has a lot of fish. The numbers are in the thousands. And there is probably at least one of any fish you’ve seen in a local shop. 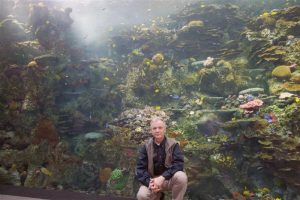 Bruce Carlson in front of one of the reef displays.

The last thing the average visitor is going to notice is the coral. The tank began with a mix of artificial and cultured live corals. The goal is to gradually increase the proportion of live corals as the tank matures. Few visitors may take note of the corals and even fewer distinguish between the artificial and live corals. Yet in some respects the challenge of creating a 160,000 gallon coral reef tank is as great as the more obvious challenges of maintaining Whale Sharks and Beluga Whales.

Designing a reef tank is pretty much the same regardless of whether the tank is 55 gallons or 160,000 gallons. Corals need good water quality, intense lighting, and vigorous water motion. The need for these things is constant as the size of the tank increases, but the practically of providing them decreases. How does one adequately light corals in a two story tank? How does one create realistic water motion in a display tank thirty feet across? And how does one maintain good quality water in a 160,000 gallon tank several hundred miles from the nearest source of seawater? 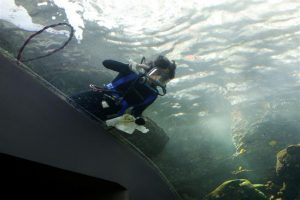 Cleaning the glass for one of the displays.

Outlining the components of the coral reef tank is an entire article by itself. In brief, the mechanical components of the tank are similar to a typical reef tank, only larger. Lighting uses a combination of natural lighting and 72,000 watts of artificial light using a combination of 1000 and 2000 watt bulbs. The light fixtures are positioned well away from the surface of the water and corals are growing even in the deeper portions of the tank, so it takes this much light to reach light levels commonly found in reef tanks.

While most Public Aquarium coral reef tanks use natural seawater, either pumped or trucked in, The Georgia Aquarium uses artificial seawater. The brands of sea-salt used are the same brands we buy, but the bags are a little larger than the ones we typically find in the hobby. They are moved by fork-lift truck. Water is processed through sand filters and foam fractionators with ozone. The tank contains five tons of cultured Fiji live rock, the same cement based product available to hobbyists.

Visitors tend to spend a great deal of time watching the coral reef display. They’ve found the same thing that we hobbyists have found-that there is something peaceful about a reef tank, particularly if someone else maintains it. Benches and plenty of standing room also encourage visitors to linger. As one moves on, one finds additional smaller “theme” tanks displaying animals most of us have seen. One display has two Rhinopius sp.

The Georgia Aquarium is adjacent to Olympic Park within walking distance of downtown. The Aquarium hopes to attract more than 2 million visitors a year. During the opening weeks more than 14,000 people a day were visiting the Aquarium, so this may be achievable. Walk-up visitors can be met with long waits to get in, but the Aquarium allows advance reservations on their website. Even with reservations, the waits can be lengthy on the weekend, so if possible visit the Aquarium during the week. Another option is to buy an annual membership. Membership provides priority access to the Aquarium, a separate waiting line, and discounts in the gift shop. As of December, over 130,000 people had purchased memberships.

The Georgia Aquarium web site provides a great deal of information at http://www.georgiaaquarium.org, and the Atlanta Journal-Constitution has covered the construction and openning of the Aquarium in great detail. Their archives at http://www.ajc.com even include an audio tour of the Aquarium.