The Perfect Fish for Reef Aquaria? Two Deepwater Anthias from the Pacific 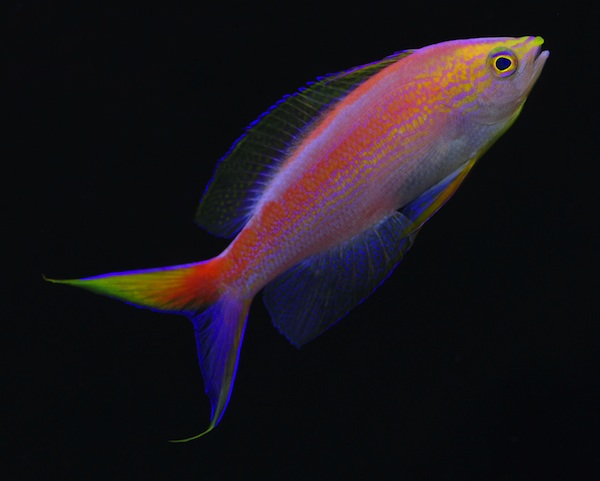 Out of the vast array of marine species available, is there really a group that could be considered the perfect fish for reef aquaria? The characteristics of this perfect group of fishes would surely have to include the following: they do not harm stony corals, soft corals, or sessile invertebrates, they must be attractive and very colorful, they must be active and like the strong current in modern reef aquaria, they should stay out in the open for all to observe their beauty and grace, and lastly, they would have to play well with other dissimilar fishes. Some of the smaller species of fishes commonly referred to as Fairy Basslets or Anthias belonging to the genus Pseudanthias are species that I would consider the perfect reef aquarium fish, fitting the bill to a tee.

In the wild, most Anthias species can be found in very large aggregations, oftentimes alongside other similar looking species, hovering over the reef consuming zooplankton that passes by in the water column. To me, this is the iconic reef fish, as hundreds of Anthias hovering in the swift current overtop Acropora, Pocillopora, Porites and bright red or orange Dendronephthya is an unforgettable sight to behold when diving. Numerous reef aquarists dream of recreating this little slice of the reef in their home aquariums, trying to maintain a small congregation of Anthias, which normally consists of one male and numerous females of the same species. Typically, over time, the number of fish in the group dwindles as the weaker individuals are constantly harassed and eventually killed by the ruling male or dominant female in the group. This social structure and behavior is perfectly normal for Anthias species, as they create a distinct hierarchy or pecking order both in the wild, and in the confines of home aquaria. 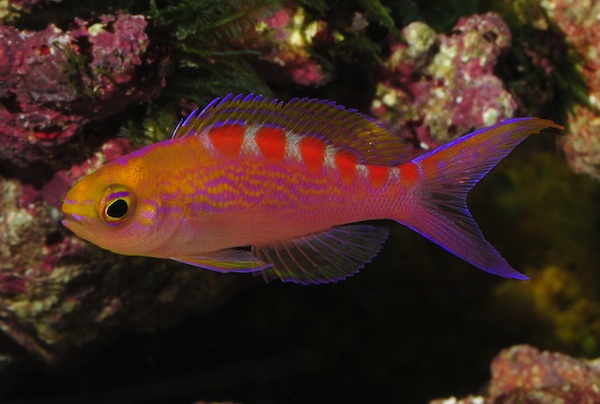 Anthias are fascinating fishes, not only in their behavior, but also in their complex ecology and physiology. This group, like other reef fish species, is known as protogynous hermaphrodites, having the ability to change sex into fully functioning adults. Anthias are also sequential hermaphrodites, starting off life as females, and if the conditions are right, later changing sex into a male. This sex change is influenced by the social structure of the harem or group. Only the most dominant females will change into a subordinate male, eventually climbing their way up the ladder to rule the harem as the dominant male if the old ruling male were to perish or is removed from the group due to predation.

Most species of Anthias can grow large, and over time can become quite belligerent and very aggressive towards their own kin, eventually becoming intolerant of one another in all but colossal reef aquaria. There are however a few smaller species of deepwater Anthias from the Pacific that do well in mid-sized reef aquaria. The Red Saddled Anthias and the Central Pacific Anthias are two ideal choices, both of which are not only spectacular in their coloration and markings, but also are rare in the aquarium trade due to their limited harvest, isolated locales and extreme depth where they are most abundant.

The Red Saddle or Yellowspotted Anthias is a deepwater reef species found from Japan, through the Philippines and Palau, and west through Bali and Christmas Islands in the southeast Indian Ocean. Attaining a maximum size of 4.25” (11 cm) in length, they prefer outer reef slopes, caves and ledges at depths ranging from 18- 63 meters. They are most abundant and normally found in large aggregations at 30 meters or greater, swimming alongside other similar Pseudanthias species such as P. lori, which they closely resemble, but differ slightly by having fewer dorsal rays and more pronounced red saddles that adorn the fish down the entire length of the their body. These fishes are exported infrequently from Cebu, Philippines and normally arrive in batches of 20 or more small individuals around 1.5 to 2” in total length, oftentimes emaciated and in a weakened condition. With careful acclimation, handling, and intensive conditioning they can be brought back to optimum health in three to four weeks. Unlike most other Anthias species, the Red Saddled Anthias can be far more reclusive and easily startled in larger reef aquaria when maintained with large active fishes, and oftentimes will not fully settle in and can starve trying to compete for food. To avoid this, the best method for their introduction into home displays is to add them to a well established aquarium first, prior to the introduction of larger or more active species. This will allow them to settle in properly and learn the terrain with little to no competition from existing tankmates. In a matter of several weeks, when offered small quantities of food often, they should be out in the open the majority of the day for all to enjoy.

The Central Pacific or Golden Anthias are restricted to the Line Islands and Fanning Island (Kiribati) in the eastern Central Pacific. The maximum size for these fishes varied depending on the resource, and ranges from as little 2.5” (6 cm) (Allen and Steene), to about 4.8” (12 cm) (Kuiter) in length. I have personally handled numerous adults, and even males that frequently display intense nuptial colorations were upwards of 3.5” in total length, so I think their true maximum size lies somewhere closer to the latter of the two published sizes. They can be found in small groups over rubble and bolder laden outer reef slopes at depths ranging from 40-60 meters. Exports originating from Kiribati are infrequent, and route through Hawaii once per month due to limited flights and cargo space. These shipments are normally comprised of mostly Flame Angelfish- (Centropyge loriculus), but on occasion, several small batches of varied sized fishes containing healthy juveniles, females, and several small male fishes make their way to the US market. Although a bit more shy and timid than most other Anthias species initially, as they settle in and become accustomed to their surroundings, they can become more aggressive, especially towards one another and similarly shaped or colored tankmates. I would recommend keeping this species either singly or in a small group of one male and numerous females, and as the only species of Anthias in the display as males can be intolerant of other Anthias species when mature.

Deepwater Anthias can be a more challenging to acclimate to home aquaria when compared to most of the larger Anthias species, but with a little planning, the correct environment, and proper conditioning, they are well worth the effort. A well-established reef aquarium containing an abundance of live rock with several overhangs to provide low light areas, and ample supply of micro fauna in the form of copepods and amphipods is ideal. Although these species are accustomed to lower light levels, they all seem to adapt well to the bright lights utilized on most modern reef aquaria. When maintaining a group of these fishes, I would recommend aquariums that are a minimum of 4 feet long or greater (a standard 120 gallon aquarium measuring 48” x 24” x 24” is a nice size to work with), as long as there is adequate height and surface area. Like other slender and narrow marine fishes, Anthias will try to leap out of the aquarium when startled or harassed, so a secure lid or some fine mesh netting for open top displays is also a must. For reef-ready displays that utilize a remote sump or filter unit, covering the overflow boxes is also important as it seems these fishes will eventually find their way into these areas if proper precautions are not taken. These species prefer moderate to strong water flow, and seem to do best in aquariums that have numerous water moving devices in the display. This is one way to help reduce aggression when maintaining a small harem or group of one species as the swift current distracts the dominant fish from the relentless pursuit of females in the group. 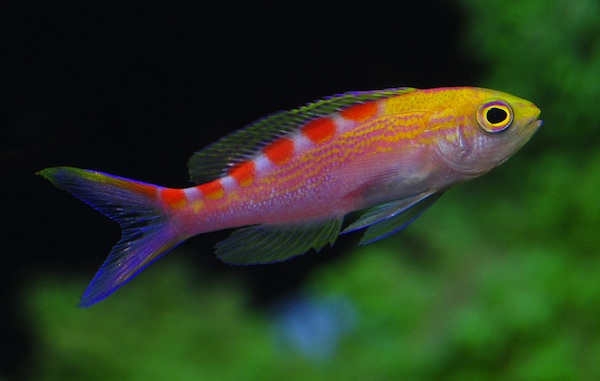 I would recommend purchasing individuals from reputable sources that have properly handled and medicated these fishes for external flukes. Proper quarantine and conditioning prior to sale is the best way to ensure a healthy transition to your aquarium. These Anthias will do perfectly fine by themselves, but when trying to maintain a group of one species, it is best to introduce either all juvenile fishes, or a group of females and only one male. I have been the most successful in establishing a small group of one species per display by adding them early on, so they are one of the first fish introduced into the display, prior to larger more active and potentially more territorial or aggressive fish. Most deepwater species can be very shy and reclusive when first introduced into the display, so little to no competition or threatening behavior from previously established inhabitants is important. These fish will adjust more successfully if they are the dominant animals in the display so they do not feel threatened. Upon their introduction, it is not uncommon for them to immediately dart for the rockwork and hide. Overtime, they will venture out from the rockwork a few inches at a time, testing the waters to make sure there are no predators that will swoop in and attack or consume them. It is important to keep your distance from the front glass of the aquarium during this time, and make sure there is limited activity in front of the display as to not startle the newly introduced fish, so they will settle in easily with little to no stress. In a short period of time, once they are accustomed to their surroundings and do not feel threatened, they should always be out in the open interacting with one another in the group.

To condition and wean these fish onto prepared foods, offer very small amounts of vitamin enriched live or frozen artemia, as well as enriched frozen mysis frequently throughout the day. Like most marine fishes that I condition when they first arrive, it is not uncommon for me to offer very small quantities of food up to 10 times per day once they begin to recognize the new food source and consume this new food without rejecting it. Once the new Anthias start feeding well, offering a varied diet of meaty fare such as enriched frozen mysis shrimp, enriched frozen Artemia, finely shaved shrimp, frozen Cyclop-eeze®, and frozen Nutramar® Ova (prawn roe) is ideal for their long term health. One interesting characteristic of Anthias species is their compulsion for yawning, or opening their mouths very wide. This behavior is done to keep their jaw muscles flexible and agile so they are able to snatch pretty items quickly and easily, and it is not uncommon for individuals to perform this ritual numerous times per day. 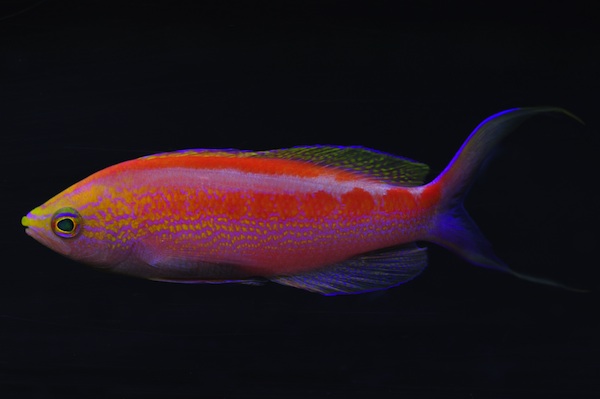 Either the Red Saddled Anthias or the Central Pacific Anthias can be an excellent choice of Anthias for the seasoned enthusiast who wishes to house a group of fishes that are not the norm. Both species are moderately priced, and can be successfully maintained in home aquaria for many years if provided with the proper diet and environment in which to flourish. These incredible beauties, with their unique social structure add bright coloration and activity to the modern reef displays, making them the perfect reef aquarium fish!