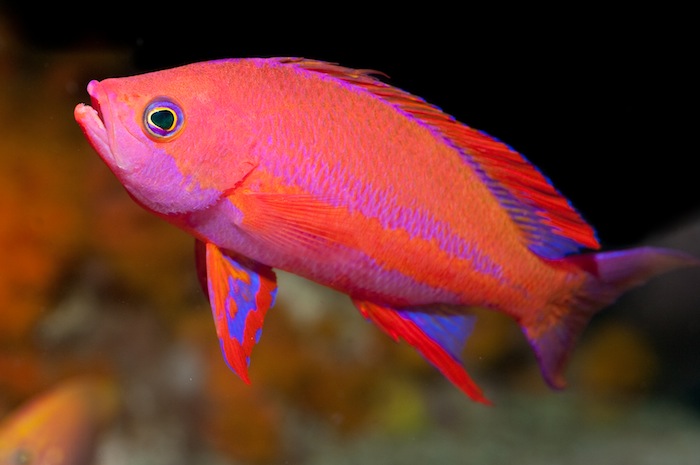 In the last issue of Reefs Magazine, I discussed the Parvulus Cardinalfish, a small fish that can be easily kept in small groups in captivity. In the next few issues we’ll take a look at some other species of fish that are ideal for forming shoals in your reef aquarium. The fairy basslets or anthias (family Anthiidae) are one of the more popular choices to keep in groups because they are small, colorful, active, and form relatively stable social groupings that can persist for several years in a home aquarium. One of my favorite fairy basslet species in this family is the Randall’s Anthias (Pseudanthias randalli), a small and colorful fish that is moderately easy to keep in small groups. 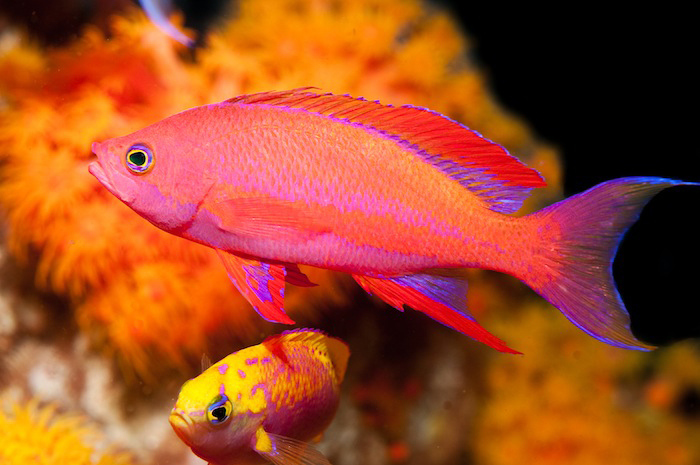 The Randall’s Anthias is found in the Western Pacific Ocean from Japan to the Philippines along deep reef slopes where it stays close to caves and crevices that provide quick hiding places. This species lives in deeper water than some of the more common species of fairy basslets found in the aquarium trade such as the Lyretail Anthias (P. squamipinnis, P. cheirospilos) or Redcheek Anthias (P. huchtii), and thus typically has a higher price than some of its congeners. The depth range for this species is listed from 50-230 feet (FishBase). Like all Pseudanthias spp., the Randall’s Anthias are protogynous sequential hermaphrodites that live in mixed sex shoals in areas of high current and plankton availability (Michael, 1998). A maximum size of just under 3″ makes this species one of the smallest Pseudanthiasspp. available and ideal for creating a shoal in an aquarium.

The Randall’s Anthias goes through one of the most striking color changes of any anthias species as it transitions from male to female. Females are an overall pinkish orange color on most of the body that blends to bright yellow on the tail, eye, and snout. The dorsal half of the body is more orange, and this gradually blends to a slightly more pinkish color on the ventral side of the fish. The ventral, ****, and dorsal fins of females should have a very thin and subtle bluish purple margin to them. The fins of females should be rounded and not have any filaments, with the exception of the third dorsal ray which may be extended in very mature females or females that are transitioning to males. In a captive population composed entirely of females, the extension of the third dorsal ray is a surefire sign of sex change starting to occur.

As females of Randall’s Anthias change to males, a dramatic color shift occurs. The first signs of sex change can be seen in the dorsal and ventral fins of the fish. Females that are getting ready to change to males will develop an extended third dorsal ray, and may show signs of red in the margin of the rear part of the dorsal fin. In captive populations if enough males are present (more on this later), females may exhibit this transition coloration and morphology for several years. If there are no males present or not enough to dominate all the female members of a social group, the transition to a male may take place. The next steps in color change can be seen on the ventral fins, which become ringed with a thick red band and a yellow center. At about the same time, the upper lip extends out beyond the lower jaw to give the fish a bit of a “fat lip” appearance. As the sex change progresses further the caudal, dorsal, and **** fin tips become angled and develop long filaments. The dorsal and **** fins become a mix of dark red and bluish purple, and the caudal fin becomes an overall bluish purple color. The ring around the eye turns from yellow to purple. The last sign of a fish turning completely into a male is the development of thick horizontal bands of alternating dark red and bluish purple on the side of the body. These bands in males may become pale and washed out in the absence of females and are the hardest color feature to maintain in captivity. The dark bands may require a stable social grouping in order to be prominently displayed. In one of my exhibits that contains a population of 9 female and 3 male Randall’s Anthias, only one male has these very dark alternating bands and is clearly the “supermale” of the tank, dominating all other members of the species. 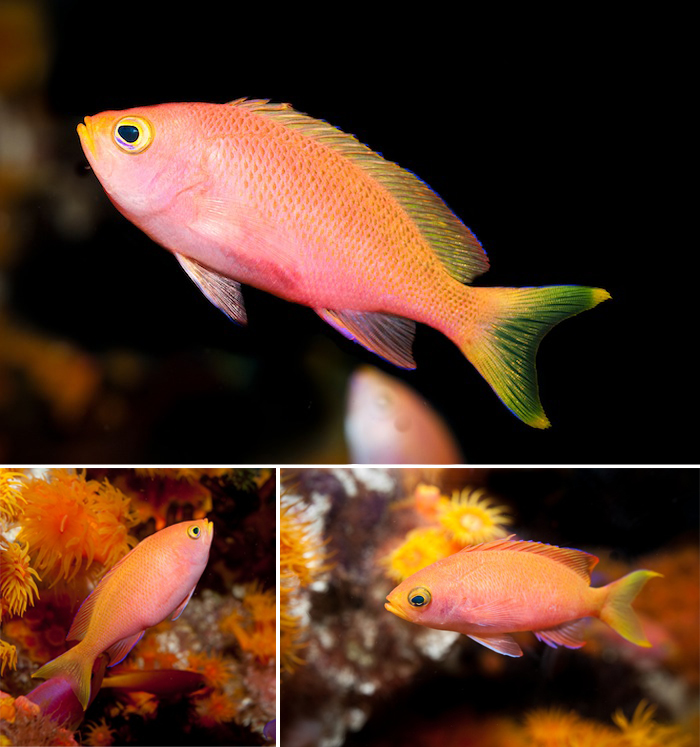 When selecting a Randall’s Anthias for purchase the same general rules apply as for all other marine fish; close attention should be paid to the eyes, fins, and musculature of each specimen. Pinched stomachs, cloudy eyes, and red or ragged sides on an individual can be a sign they won’t live long. Torn or ripped fins are generally not a bad sign and can recover completely provided the fish is placed into good conditions. Healthy individuals should eat live adult brine shrimp within 24-48 hours of being placed into a new aquarium. One interesting quirk about Randall’s Anthias is that they sometimes swim upside down or in a vertical orientation; although it may look they are unhealthy or in distress, this is perfectly normal.

Captive husbandry accounts for Pseudanthias spp. in general apply to the Randall’s Anthias as well; they require frequent feeding and plenty of swimming room along with good water quality (Michael, 1998; Wandell, 2010). Randall’s Anthias are not particularly difficult to keep thriving in reef aquaria, falling somewhere in the middle of the difficulty range between the easiest anthias like Lyretail and Redcheek Anthias and the most difficult like Tuka Anthias. Feeding can be done 2-3 times daily, and these anthias will take fairly large food items like mysid shrimp, small krill, chopped prawn and clam as well as smaller food items such as fish eggs, frozen copepods, and baby brine shrimp. Newly acclimated individuals may be reluctant to feed on anything but live food, and enriched adult brine shrimp and live mysid shrimp are perfect food items for this purpose. Newly acquired Randall’s Anthias may do best if they are housed in a carefully constructed quarantine system for the first few weeks in captivity. The quarantine tank need not be overly elaborate (Wandell, 2010).

Most Pseudanthias spp. hover several feet above the substrate to search for zooplankton, but Randall’s Anthias are atypical in this regard. They spend a lot of time lurking very close to the rockwork, or tucked inside of caves and crevices. An aquarium designed with Randall’s Anthias in mind might mimic a reef slope with large caves, vertical crevices, and generally a lot of space within the live rock structure for the fish to hide in. At the same time, a single large open swimming space is important for males to be able to display their courting behavior (more on this later). Standard reef aquarium temperatures between 75-80 degrees will suit Randall’s Anthias just fine, although because of their deep water origin they will prefer a more dimly lit aquarium or at least lower light areas where the fish can retreat to.

Creating a shoal in your aquarium 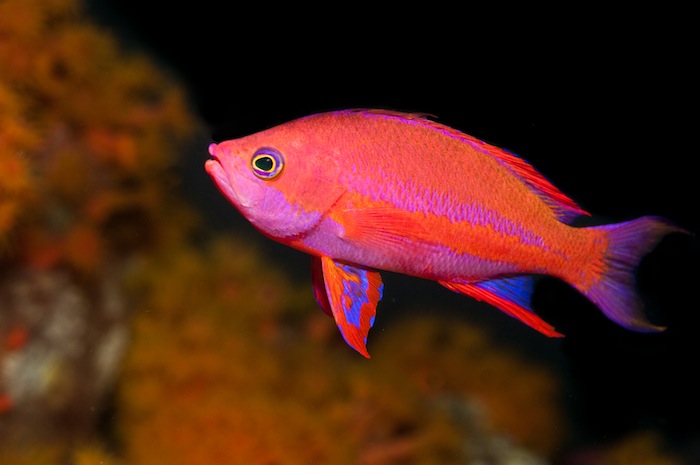 The Randall’s Anthias is one of the best anthias species with which to form a shoal in a home aquarium. The species’ maximum size is only 3 inches, so a shoal can be housed in a relatively small amount of space. Unlike some of its congeners that can be found in shoals of hundreds to thousands of individuals in the wild, the Randall’s Anthias can be found in shoals that consist of 10-20 individuals (Michael, 1998). This means that an accurate social grouping can be recreated in a sufficiently sized home aquarium.

One of the most frustrating problems with keeping shoals of hermaphroditic fish in aquariums is that eventually many of the individuals become terminal males. This phenomenon is reported to occur with most fairy wrasses (Cirrhilabrus spp.), and several other anthias species. Is the Randall’s Anthias an exception to this problem? At the Steinhart Aquarium we have a 36″ cube tank that holds approximately 200 gallons of water and is home to a shoal of 12 Randall’s Anthias. These fish were acquired as females in late 2007 and since then three of them have changed sex to become males. The 3:9 male to female sex ratio has been stable since mid 2008. While some of the females show some evidence of sex change such as an extended third dorsal ray and hints of red in their fins, none of them have changed sex in over two years.

One of the most rewarding aspects of having a Randall’s Anthias shoal in an aquarium is observing the courtship and displays of the males as they court the females. The males occupy three dimensional territories that they constantly patrol and “dive bomb” any females that approach in their space. This dive bombing by the male consists of a very abrupt rush at a nearby female that may be a foot or more away, followed by a very quick loop around the female fish while holding all of his fins erect. Generally the females casually ignore all of this attention, but at dusk may be receptive to spawning. Because of all the energy they expend doing this, the males are very lean fish and not nearly as massive as the bulkier females.

This concludes our look at the Randall’s Anthias. If you have any questions about this species I can be reached at mwandell@calacademy.org. Until the next issue of Reefs Magazine when we take a look at some species of shoaling gobies, happy fishkeeping. 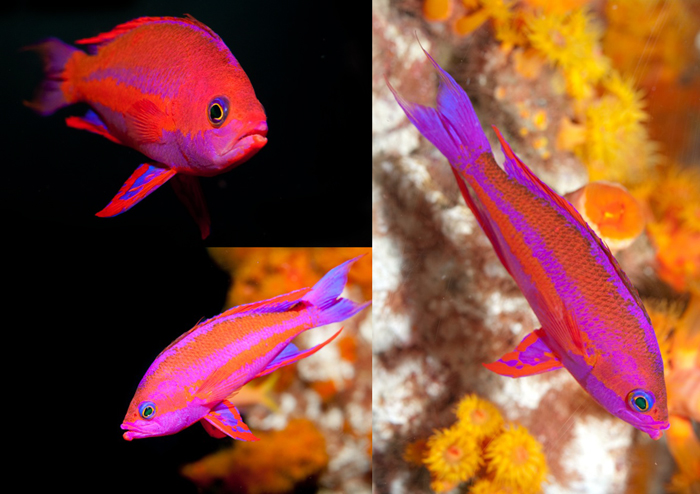